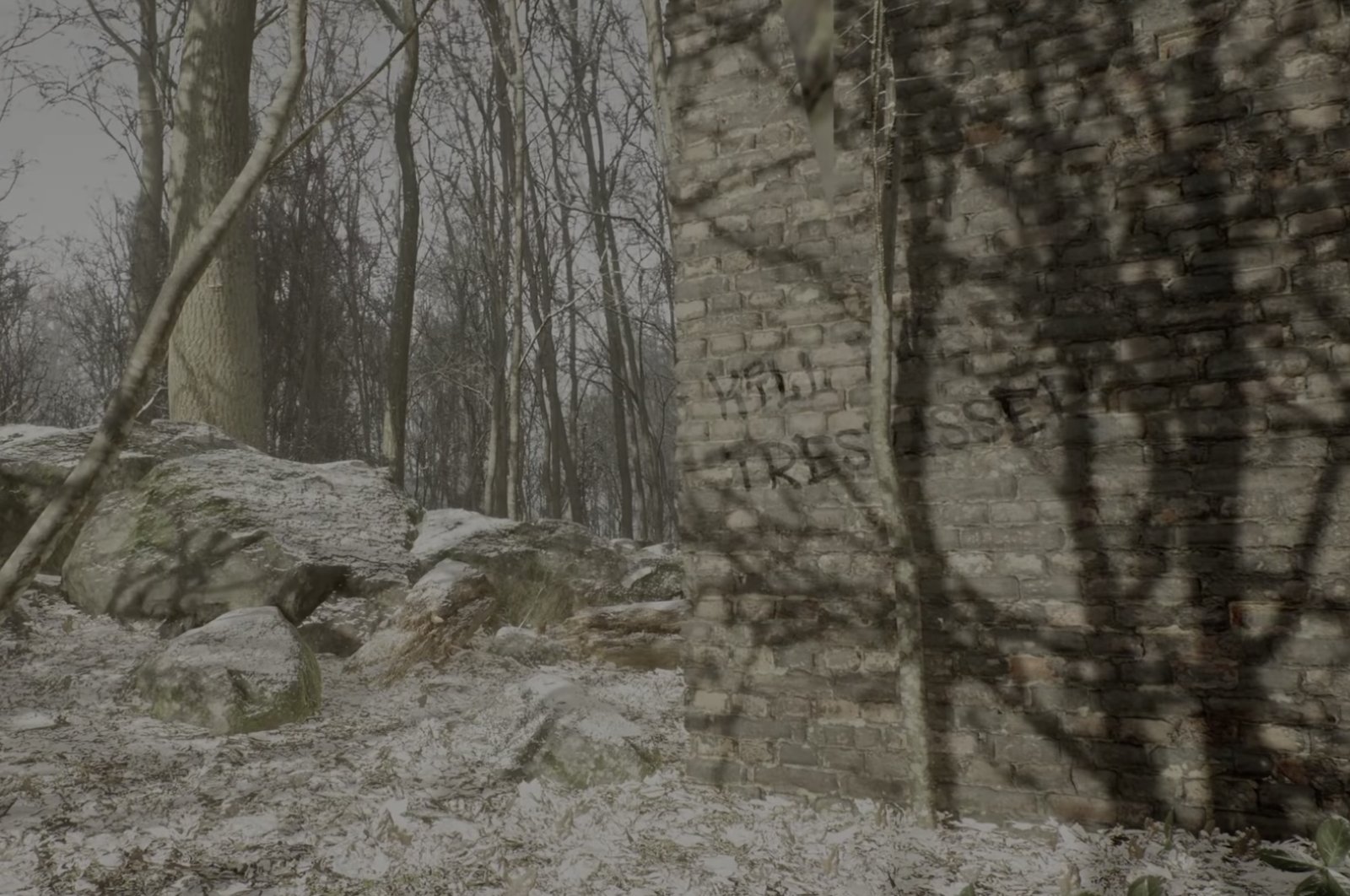 A screengrab from the upcoming indie title "Abandoned" featuring a tree which apparently blocks out letters P and T on a graffiti reading “Kill the Trespasser.” (Credit: Blue Box Studios)
by Emre Başaran Jun 21, 2021 9:35 am

This is most probably an incredibly sophisticated PR stunt by an indie game developer or, much less likely, Kojima being Kojima. Even though an official denial has been issued, the coincidences and striking similarities are so intense I cannot wrap my head around it

Japanese game developer Hideo Kojima, the mastermind behind the legendary Metal Gear Solid series and the groundbreaking, genre-defining Death Stranding is a rather unpredictable character full of surprises, to say the least.

Nowadays, Kojima fans are especially hyped to the brim over a possibility that their favorite game creator might have something new up his sleeves – A new game in the famed Silent Hill series. The intellectual property rights of the Silent Hill franchise belong to Japanese game company Konami, which made headlines in late 2015 due to a very bitter and intense divorce with Kojima after nearly two decades.

It all started with a tweet from Blue Box Game Studios, a company (supposedly) from the Netherlands, headed by a Dutch-Turkish indie game developer named Hasan Kahraman.

“Guess the name: Abandoned = (First letter S, Last letter L). Reveal closing in,” the company said in the tweet, leaving many fans with many questions on their minds: Are they teasing Silent Hill? If so, why do they call the game “Abandoned” without any “Silent Hill” epithet, and if not, what can the letters “S” and “L” possibly mean for a horror game that clearly looks and feels like a Silent Hill sequel? If it is a Silent Hill game, why doesn’t Konami, the owner of the series, tease it themselves? It looked like a total and complete mystery at first.

I did some research, and what I found is, mind-boggling to say the least.

Is Kojima just being Kojima?

If the very subject of this whole “conspiracy theory” were not the one and only Hideo Kojima himself, absolutely no one would bat an eye at the striking hints that this public relations stunt (based upon Blue Box Games’ official rejection of any affiliation with Kojima, of course) was giving to Kojima fans and Silent Hill fans alike. But Mr. Kojima has a rather unusual past with regards to “marketing.”

In 2013, before the official announcement of Metal Gear Solid 5: The Phantom Pain, a non-Metal Gear version of the game was shown off by a fake studio. The stunt aimed to get passionate MGS fans more active on social media and to “energize the community,” as Kojima explained, or rather tried to explain. This very event is the core reason for all the fuss online about the so-called “new Kojima game,” which is alleged to be named “Silent Hill: Abandoned.” Even a subreddit was launched to solve the mystery, in which scores of Kojima fans and other people alike tirelessly debate the possibilities surrounding the supposedly non-Kojima-related indie game “Abandoned.”

The fact that the indie game is coming exclusively to the PlayStation 5 only helps strengthen the allegations as Kojima and PlayStation have been somewhat synonymous since the dawn of time. In usual circumstances, indie games generally first release for the PC, then get console ports. But it is clear that Abandoned is something special.

The “telltale signs” about the alleged links between Kojima and the game are more interesting than anything I have ever seen before in a conspiracy theory.

For example, the banner photo of Blue Box Studios' YouTube channel is just a bunch of hills. The logo of PlayStation Studios and Blue Box Studios use the exactly same font and exactly the same art style, albeit with colors inverted.

Another sign that the Blue Box Studios is just a façade to keep something out of sight is hidden in the name itself. “Blue box” is a colloquial term for an electronic device that is designed to commit telephone toll fraud. So, either the studio takes its name from a fraud, or it’s just been a very unfortunate coincidence for them.

Another weird thing is that the company has announced that it will publish an official app on PS5 to “run the game trailers” on the console. What a weird decision for an indie game developer to invest much time into making a time-limited app that is bound to be obsolete the day Abandoned is released, rather than just uploading the trailers to YouTube or some other platform (which of course would not be interactive or rendered on PS5 hardware, but that is what would be expected from an indie developer) to drive even more people on board. This move is especially meaningful as Kojima Productions released something called “P.T.” (abbreviation for “Playable Teaser”) in 2014, under the fake name “7780s Studio” – just like what the conspiracy theorists are alleging Kojima is doing nowadays with Blue Box Studios, the “employees” of which use stock photos on their LinkedIn pages and as I mentioned previously, the name of which is basically a reference to a fraud device. The P.T. turned out to be a prologue for “Silent Hills,” the Silent Hill sequel that could not make it to production and was never released.

In addition, the trailer for the Abandoned features a tree that apparently blocks out letters P and T on graffiti reading “Kill the Trespasser.”

Besides, Blue Box Studios’ only game other game, called “The Whisperer,” has an icon deeply reminiscent of Death Stranding’s trademark handprint.

A canceled game by the Blue Box is also called “The Lost Tapes,” which is the name of a soundtrack in MGS 5.

The striking signs of a possible “act of Kojima” do not end here. Maybe the most obvious one is in the name: Hasan Kahraman, the supposed Dutch-Turkish indie game developer, and Hideo Kojima himself share the same initials, H and K. Nevertheless, what’s more interesting is, “Hideo” translates to “hero” in English, which in turn translates to “kahraman” in Turkish. Kojima, you are slick – throwing breadcrumbs at us to follow to discover the true meaning. Jokes aside, this truly is the most entertaining conspiracy theory I’ve ever read into. Every single detail just falls in place for a total and complete persuasion that it’s real, only to later remember the official denial from the Blue Box Studios and not being able to make any sense of it.

Our Dutch-Turkish game developer Hasan Kahraman also has a PlayStation Network account, which has a total of 1238 trophies in it, which in an interesting twist of fate is the exact same number used for a Japanese commercial for Silent Hill 4.

Other than that, no information about Hasan Kahraman is to be found anywhere, not a social media profile on Twitter, Instagram or even LinkedIn. The only picture we have of him is the one on his PSN account nicknamed “SneakyWarrior” – which is telling in its own right.

But out of all these allegations I mentioned and those I did not (it's a bottomless pit, trust me), I found one incident very suspicious. It seems like a YouTube channel interviewed Akira Yamaoka, the composer for Silent Hill, and took the video down after “being asked to remove the clip.”

Konami denies it asked Al Hub, the YouTube channel that released the interview, to take down the video. Nevertheless, let’s take a look at what Yamaoka said in the interview.

Teasing an upcoming project, "I think it's the one you're hoping to hear about," he says. Pretty obvious for me, but of course, highly debatable too.

Official narrative is what matters – for now

Despite all those prominent signs that Kojima and Konami might be partnering up after years of bitter divorce to create a new Silent Hill game, we can never be sure if it is going to happen or not. The only thing that matters for now is the official denial from the Blue Box Studios. “We wanted to set things straight. We have no relations with Konami. Silent Hill is owned by Konami. We do not have any relations with Hideo Kojima. It was never our intention to tease the name as Silent Hill. We sincerely apologize for this,” they said in a tweet – and it is what really matters for now. But if this really does turn out to be a massively sophisticated PR stunt, especially considering the "Coming Soon" announcement from the Official Konami Shop for Silent Hill "merchandise," it will not be a surprise for you anymore. Kojima, you are slick.