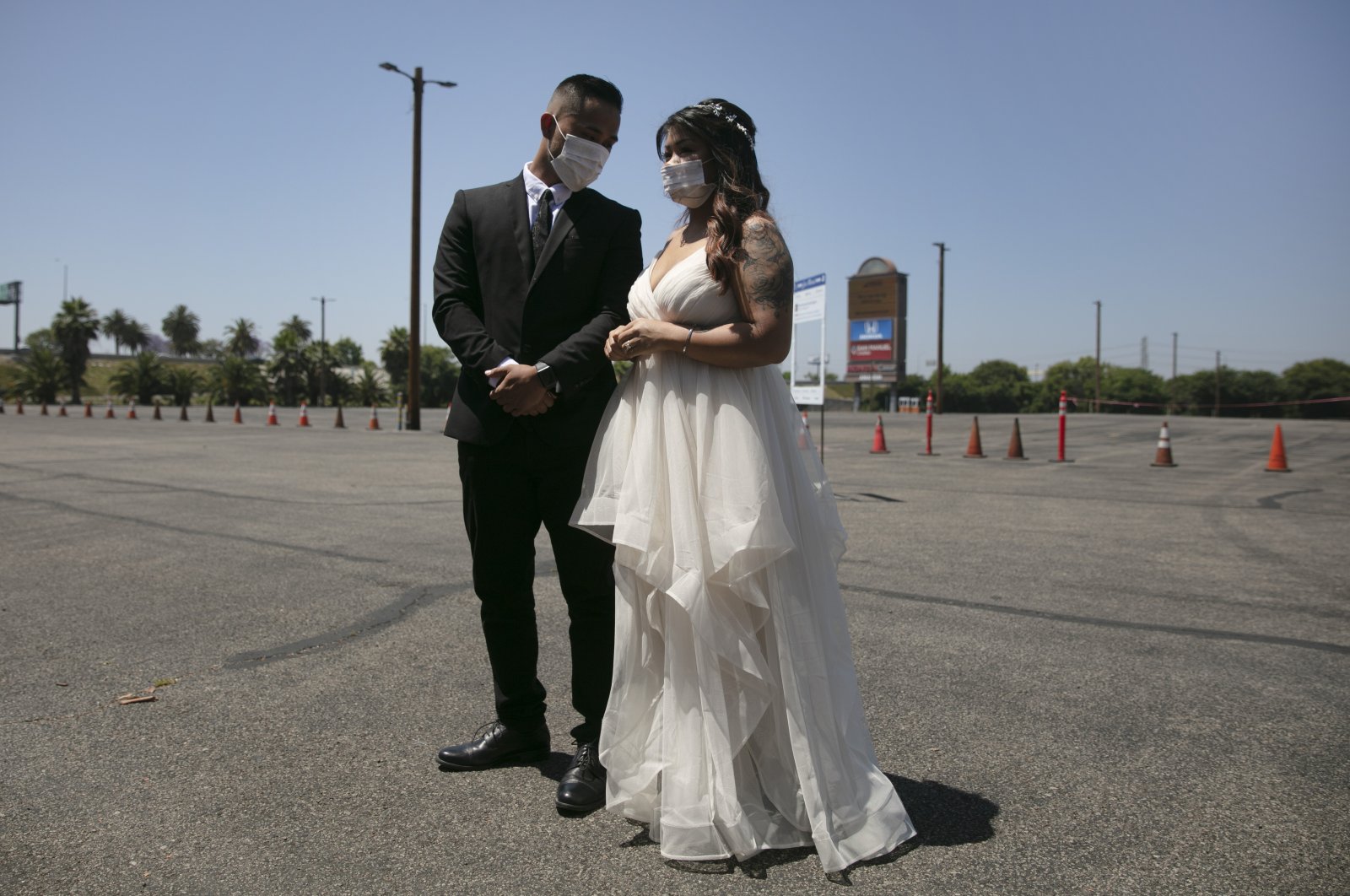 Roselle Querido, right, and her bridegroom Mo de las Alas wait for their marriage service to begin in the parking lot of the Honda Center in Anaheim, Calif., Tuesday, May 26, 2020. (AP Photo)
by French Press Agency - AFP May 29, 2020 10:20 am
RECOMMENDED

"You can take off your mask and kiss the bride," the priest said, as a septuagenarian U.S. couple who spent the pandemic lockdown together after a single date married on Thursday.

"In normal circumstances, we would still be dating," said Linda Delk, 72, her hand clutching that of her husband Ardell Hoveskeland, 78. But the novel coronavirus forced them to shift into high gear while their relationship was still in its infancy.

The couple, both of whom were still grieving the loss of a spouse in 2019, met for the first time in late February at the Peace Lutheran Church in Alexandria, near Washington.

"We met on pancake Tuesday (Shrove Tuesday) at the church," said Delk. "He greeted me, I liked him, we helped clean up together afterward." The next week, at another church event, "we were at the same table, we had a chance to talk some more," said Hoveskeland, a former urban transportation engineer. They agreed to meet for lunch.

"We got out to a lunch one time. It's the single date we have had," said Hoveskeland. Two days later local authorities called for residents to stay at home to help stop the spread of the deadly COVID-19 virus.

Given their age, the two lovebirds never imagined that they would be breaking the rules. "Both of us realized – 'I need a partner'" said Hoveskeland. Without thinking twice, she moved in with him.

"It seems the most natural thing in the world," said Delk, a former program evaluator at Gallaudet University. It was a risky move, but "none of us wanted to be alone," said Hoveskeland. "On a lot of levels we felt we connected," he said.

While at church during a religious service the couple was seized by the same rush of emotion. "I said: did you just asked me to marry you?" said Hoveskeland, without really remembering who took the first step.

"We immediately went to a jewelry store to order rings – we got them on the last day before the shop closed completely," he said.

On Thursday, clad in their Sunday best, the couple exchanged rings with friends and relatives observing the ceremony online via Zoom. A friend in Australia even rose in the middle of the night to be virtually present for the event.

"In the best Christian tradition ... you are doing the most foolish thing," joked Sarah Scherschligt, the priest who officiated the marriage, wiping a tear away that rolled over her face mask.

"In September I buried Ardell's wife," Pastor Scherschligt later told AFP, as a way of explaining her sudden burst of emotion. Back in February Scherschligt advised Ardell to talk to Linda.

"All pastors play matchmaker, we want our people to be happy," she said. But she did not imagine that they would join in matrimony so quickly. "They get to know each other faster but narrower," she said, noting that, for example, Linda never met Ardell's daughter. "They still have a lot to discover," she said.