Steam Deck: A welcome surprise from Valve, with a catch 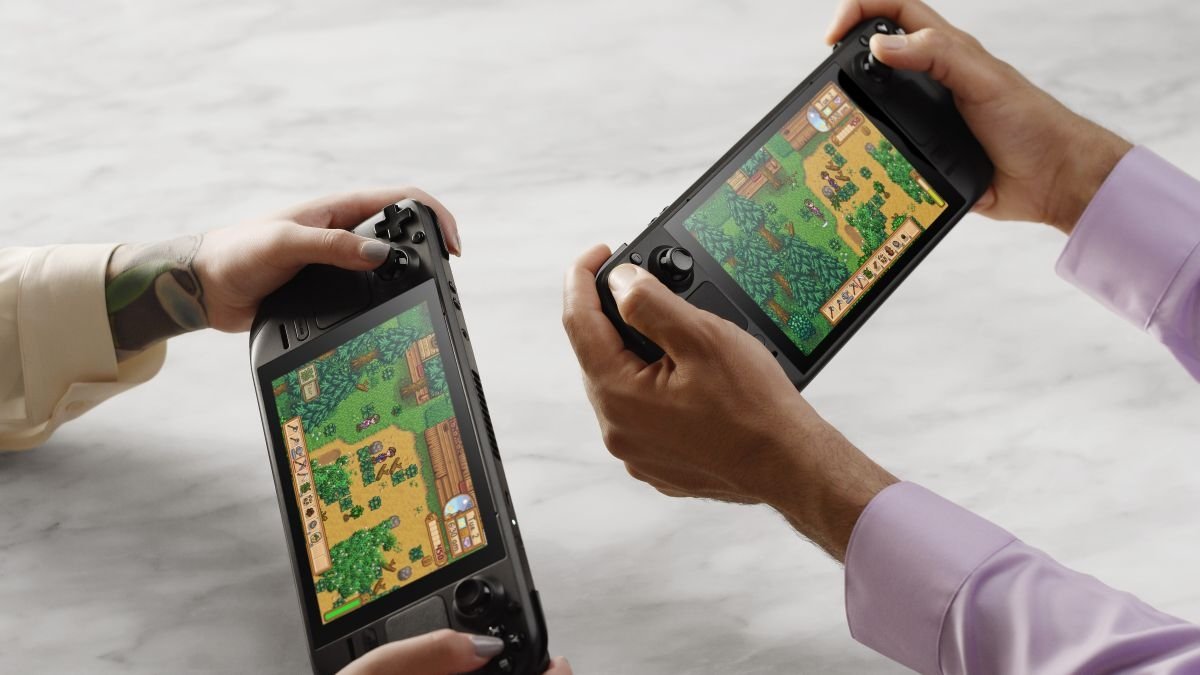 Two people are seen playing Stardew Valley on their Steam Decks in this photo (Credit: Valve)
by Emre Başaran
Aug 02, 2021 7:11 am

The big boss of the biggest marketplace in PC gaming took all of us by surprise with the announcement of the Steam Deck. It is pretty and all, but the entry-level model is set to be a huge disappointment. Here’s why

What has been taking Half-Life 3 so long?

Yes, Valve fed us a Virtual Reality (VR)-based sequel last year, the Half-Life Alyx, which was honestly groundbreaking in the VR scene. But other than that, Valve insists on not bringing a proper conclusion to the much-beloved series.

We were all wondering why that was, and at least one of the reasons for the lack of a true HL sequel has been revealed recently. It seems like the PC gaming giant has been more or less preoccupied not with software, but hardware. And that hardware truly is a beast, if you don’t opt to buy the entry-level iteration of it, that is.

Mobile gaming at its finest

One of the worst things about mobile gaming is the lack of tactile feedback. Some prefer it that way, especially Gen Z when it comes to the hugely popular PubG Mobile and many other games that have proven time and time again that a non-tactile, touch-based input model is very viable.

But as a member of Gen X, I grew up with the satisfaction of the feedback I got from the buttons of my PlayStation controllers, PC keyboards, GameBoys and all the other goodies. So, good tactile feedback is what makes gaming, gaming for me.

This is where Steam Deck comes into play.

Nintendo has been achieving unprecedented success with its Switch, which has turned four years old now and just recently got a half-baked upgrade. But everybody knows that owning a Switch is a pain in the wallet when you consider the infamous “Nintendo tax,” which implies the premium the Japanese company charges for the same product compared to other platforms. The Switch version of any game in existence usually tends to sell for high prices.

Again, that’s where Valve steps in.

Steam Deck is designed in a highly Switch-esque fashion, so any possible converts will feel at home when they buy it. A big screen in the middle, tactile buttons, analog sticks and other buttons at the sides. The two trackpads and rear buttons come as a bonus.

What makes Steam Deck so appealing is the fact that it can literally run any Steam game in your library, directly from its internal drive and with the ability to play both in handheld mode and docked mode. What’s good about the Steam marketplace is, it is usually the cheapest option to buy any game – so all those games you bought during Steam discounts will be ready to be played on that monster of a device. I find it appropriate to call it a “monster” because it apparently is a total beast when it comes to muscle. With a 4-core, 8-thread AMD Zen 2 chipset that makes use of the Taiwanese silicon maker’s RDNA 2 graphics and that operates at between 2.4 GHz to 3.5 GHz range clock speed and 16 GB RAM makes it a total powerhouse. When you consider what Nintendo has achieved in both graphical fidelity and playability with antiquated hardware on the Switch, it will come as no surprise to be able to enjoy some proper PC-grade gaming on the go.

Nevertheless, like with many things in life, there is another side to the story, and it is a little grim.

The mid-tier model seems to offer the best bang for your buck, and the highest-tier model the best experience you will have with the device.

But unfortunately, the entry-level model’s only problem is not the measly 64 GBs of storage. If you don’t play games heavy on the storage such as Call of Duty Warzone, which requires a whopping 175 GB to even install (excluding the never-ending updates that are usually over 20 GBs, of course), you may well live with it. But the type of storage the entry-level device offers is so unfortunate that you will most probably lose your temper from time to time.

The eMMC is a painfully slow type of storage. The theoretical limit for an eMMC storage is 400 MBs per second, but please take “theoretical” very seriously here. It is beyond any doubt that most buyers will not be able to enjoy such speeds on an eMMC, especially during gameplay and in demanding titles or during multitasking.

I sincerely wish that Valve could grant budget-conscious gamers super-fast NVMe SSD drives in the entry-level model like they did with the higher-spec ones.

I can only understand the difficulty of buying even the mid-tier model for $130 more than the base model, living in a country with a usually unstable currency and one that imposes relatively high taxes on imported tech. So, waiting for a highly possible price drop will be a good idea for now, and considering the fact that the world is still reeling from the effects of the chip crisis, the Steam Deck will most probably not be so easy to find anyway, just like the never-ending impossibility of finding a PlayStation 5 not in the hands of scalpers. Valve is currently taking reservations for the Steam Deck through the Steam marketplace, but only users with accounts in the U.S., Canada, EU and U.K. are able to place a reservation for the device, which is expected to start shipping in December of this year.

Valve’s decent surprise is beyond welcome as the device they will be selling is based upon the cheapest-ever PC gaming marketplace. The device is set to be a much cheaper, much more capable Nintendo Switch, so the prospects are high. But when it comes to the only advice I can give, if I may: maybe consider waiting for a price drop to buy the Steam Deck, and stay away from the eMMC model for the sake of your mental wellbeing, as waiting for content to load may lead to severe exhaustion over time. I am pretty sure that Valve did some optimization with regards to how the eMMC storage will handle things and all, but it is still a very antiquated storage technology that is technically incapable of catering to the needs of most modern games. Let’s wait and see how the entry-level Steam Deck will perform, but it is clear as day that SSDs matter. Will we be able to enjoy the scary corridors of Black Mesa in a third iteration of the Half-Life series on the Steam Deck itself? Well, that may have to wait a little bit longer as Valve has us keep our expectations in check.