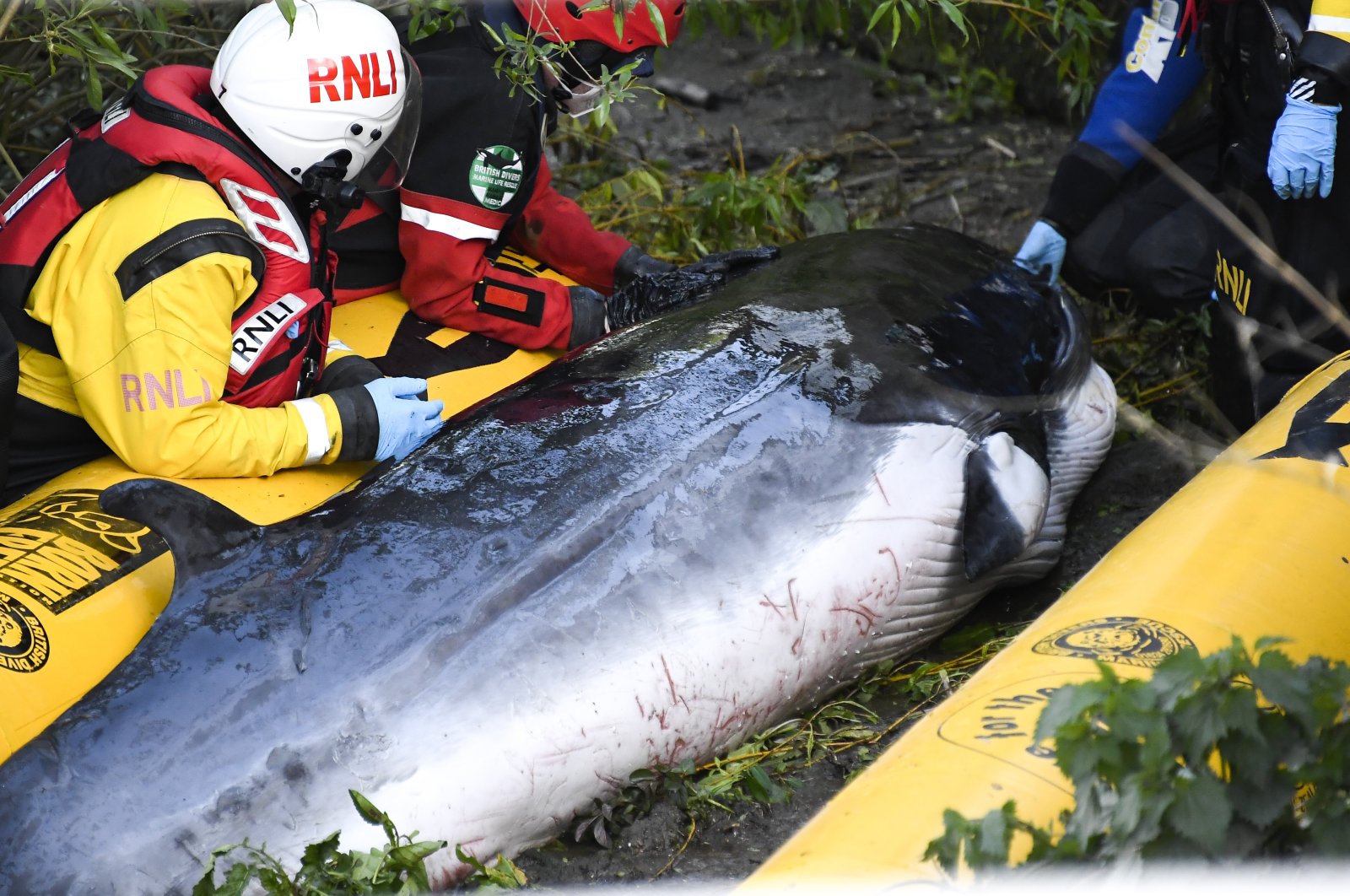 Lifeboat workers attempt to assist a stranded young Minke whale on the River Thames near Teddington Lock, in London, U.K., May 10, 2021. (AP Photo)
by Associated Press May 11, 2021 12:20 am
RECOMMENDED

A young minke whale which was lost far from home and became stranded in the River Thames near London after escaping from rescuers overnight, was put to sleep Monday as its condition deteriorated rapidly and would soon be trapped by the dropping tide near Teddington in southwest London.

"Once the whale is beached a veterinary team will be on stand by to euthanize the animal to end its suffering," the British Divers Marine Life Rescue (BDMLR) had said in a statement.

The BDMLR said the injured and drained calf would struggle to swim even if it managed to get back into deeper water.

Crews had already worked for hours before being able to free the whale early Monday from a perilous stranding on a lock near Richmond, a few miles downstream of Teddington.

However, as the mammal was being taken for further health checks on an inflatable pontoon, it slipped back into the water.

"This animal is very, very lost," Port of London Authority spokesman Martin Garside said. "It's like seeing a camel at the North Pole."

Garside said a whale had never been seen this far up the Thames before, 95 miles (150 kilometers) along the river from its mouth, with the sheer distance making the whale's route back to safety extremely difficult.

The whale, which measured about four meters (13 feet) long, was first seen lying on the lock's boat rollers Sunday night. Hundreds of people gathered along the banks of the Thames to watch the rescue operation as night fell. The area is known for wide tidal swings that easily reach over 5.5 meters (18 feet) high.

Minke whales, which are more typically found in the northern Atlantic and Pacific Oceans, can grow to a size of nine meters (30 feet).

Meanwhile, in Spain, a marine wildlife group was working to make sure that a gray whale found near Spain's northeastern Mediterranean coast, far from its usual northern Pacific migration routes, doesn't get stranded.

Maritime rescuers, firefighters and other authorities worked with conservationists over the weekend to keep a whale nicknamed Wally from venturing into shallow water and ports near Barcelona.

The maritime group said the whale entered the Mediterranean Sea through the Strait of Gibraltar and has been spotted since March in the vicinity of Morocco, Algeria, Italy and France.

In an aerial video released by the group, the whale could be seen very close to a seawall near one of Barcelona's main beaches.