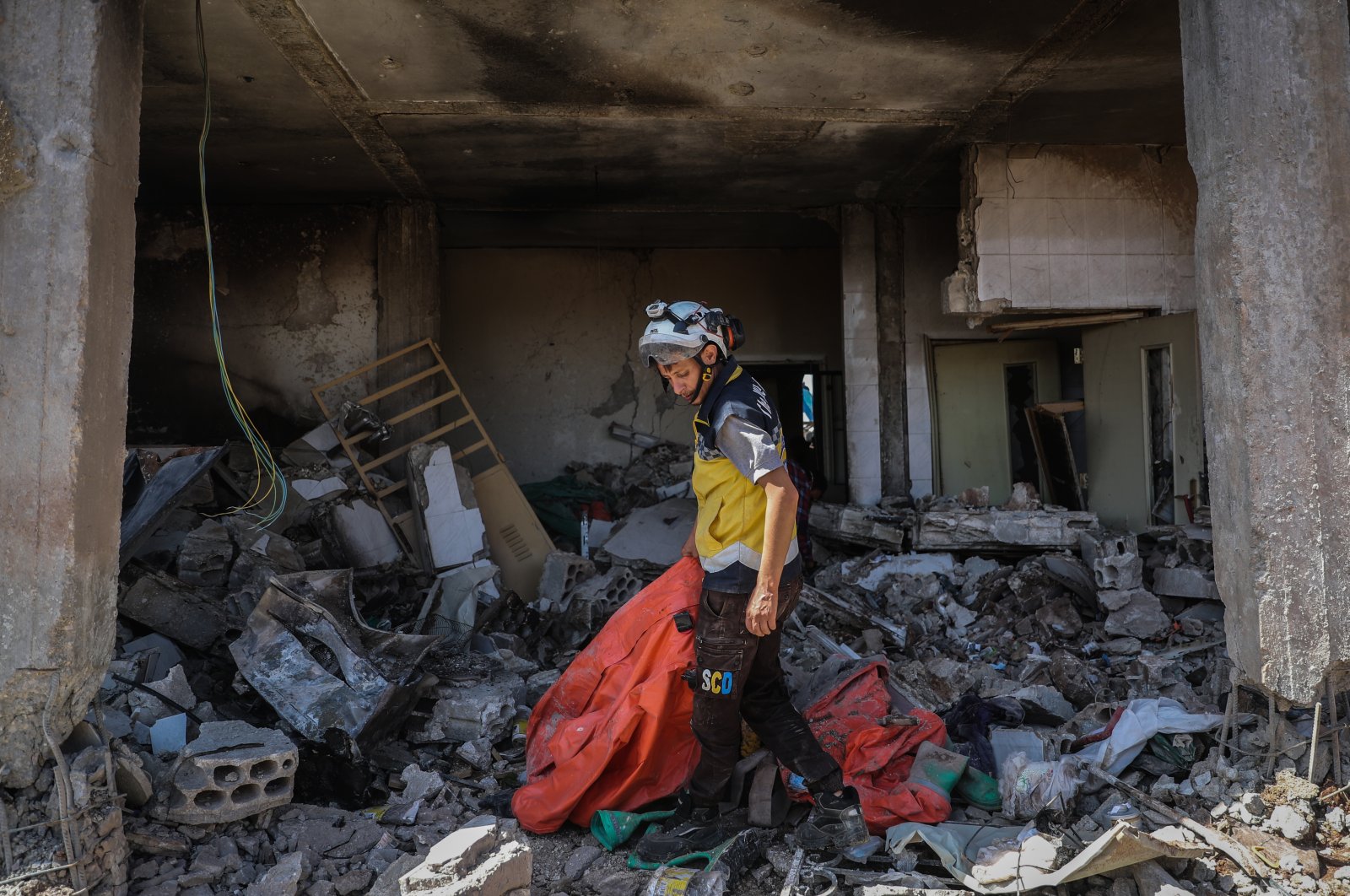 A member of the White Helmets inspects the damage at the group's center after it was targeted by warplanes in Idlib, Syria. (Getty Images)
by DAILY SABAH Sep 08, 2021 12:46 pm
RECOMMENDED

It can be hard to avoid politics when talking about Syria as it has been 10 years since a peaceful protest against the president of the country turned into full-scale civil war.

Around half a million people have died during this period. Millions have had to leave their home and move out of the country, hoping to find a better future. Nearly half of Syria’s prewar population is either displaced or living in neighboring countries or Europe as refugees. And the number keeps rising with every passing day.

However, there are people who decided to stay in Syria and join nongovernmental organizations (NGOs), like the Syrian Civil Defense group, also known as the White Helmets, to help those who are in need.

Adnan Sahiyony is a 54-year-old volunteer who decided to stay in Syria and save those who come under attack. He works at the White Helmet’s center in Latakia, one of the most dangerous parts of the country at the moment.

He worked as a driver before the war started in 2011. In that year, just like millions of Syrians, his life changed completely. In 2016, he lost one of his children in an airstrike in his city, which lead to his decision to join the White Helmets. Though his family moved to Turkey, Sahiyony stayed in Syria to help save lives.

“The only reason I stayed is to help civilians. I love my homeland,” he told Daily Sabah. Adnan manages to travel to Turkey and see his family once every few months, depending on the situation in Syria.

When speaking to someone who lives in a war-torn country, it is only natural to be curious about the horrors they have witnessed and to wonder what the biggest struggle is that they face.

“Overthinking,” he simply answered. “I was in my house and then we had to leave. It gets hard when you compare your previous life with what we have now.”

There almost wasn’t a day without some kind of attack, he said.

“It is very hard to see people dying every day, but as a rescuer, you have to do your job.”

Samir Hariri, 39, was working at a textile factory in Aleppo before he moved back to his hometown of Ariha in Idlib province when the war started. The city was bombed few times and after watching people dying in large-scale attacks, Hariri decided to join the White Helmets at the age of 33.

He has been working for the organization for the past six years and it is not getting any easier.

“The hardest is the psychological pressure, the instability and not knowing what is waiting for us tomorrow,” he said. “We lose people we love every day and the bombings never stop,” Hariri added.

His family, wife and four children live in a village near the city of Ariha in a house with a garden where they have planted olive trees.

Hariri always makes sure he explains to his children, two boys and two girls aged 13, 11, 7 and 4, what to do in case they come under attack.

“They are very proud of what I do. When I leave every morning, we say goodbye like it is the last time we see each other because I might not come back,” he said.

“But when I come back home it is a huge happiness for everyone because it is like I’m coming back from death,” he added.

Speaking about the years he spent as a volunteer, Hariri said he will never forget the day he was injured in an airstrike while responding to an incident and trying to save people in the collapsed buildings in Ariha.

Another volunteer, 25-year-old Abdullah Ashawi, was 15 when the war started. He was a student in the city of Azaz. After the war started his family moved to Turkey and for some time he stayed there with them. During this period, he was closely following all developments in Syria as he had many friends who were still in his hometown. In 2015 he decided to go back to Syria, leaving his parents in Turkey to join the White Helmets to help people suffering as a consequence of airstrikes in his hometown.

“I wanted to do all I can to help Syrian people,” he said, even though he misses his family a lot as he is unable to visit them.

Sharing his experience of being a volunteer, Ashawi said that every day there was something new, but one day will live on in his mind forever. In 2016 there was an attack on a small village close to Azaz. The White Helmets team sprung to action and headed to the village to respond to the incident, only to find many dead bodies, including babies. Seeing all this was not easy for Abdullah but he had to control his emotions as the team still needed to go to another village under airstrike.

“Sometimes it feels like it’s too much,” he said.

Ashawi explained that after so many years you stop feeling fear and become accustomed to what is happening around you.

“All you think about is that there are people who you need to save and that gives you courage,” he said. “We have to respond to the incidents very fast.”

Raed al-Saleh, the White Helmets general manager, was 28 when the war started.

“My professional career was in the field of trade before the start of the peaceful movement in Syria. I am like every Syrian who had a dream to work, be productive and build his country, but we were confronted with the tragic reality that Syria lived through before the war and the dictatorship,” he said.

When the conflict broke out al-Saleh chose to work in the humanitarian field on the Syrian-Turkish border. He started by managing the camps of the Turkish Red Crescent (Kızılay) within Turkey, specifically distributing food and tents to refugees amid increasing waves of displacement. Tens of thousands of civilians were arriving at the borders and were in need of shelter and assistance, in addition to the wounded being brought into Turkey for treatment by ambulance from the areas adjacent to the Syrian border.

He was one of the co-founders of the White Helmets in 2013.

“Hundreds of volunteers from different backgrounds and competencies came together and they did all they can to help their communities respond to bombings and other emergencies. Back then, the volunteers were not part of an institution like what we see today, instead, some volunteer groups were working in a geographical space without even knowing about other volunteer groups that were working in the neighboring neighborhoods. They were motivated by a purely humanitarian goal,” he explained.

“A charter has been drawn up in the meeting and the organization would operate under international humanitarian law. The teams agreed to establish a national umbrella to serve the Syrians, and to give it the name “Syrian Civil Defense,” he said.

Al-Saleh said he chose humanitarian work because once you see the air and artillery bombardment, the civilians under the rubble, the displaced people without shelter and the wounded without care, you cannot stand idly by, you must move and take the initiative to help these civilians and stand by them.

“No human being can see what the Syrians are going through and remain indifferent without offering to help and relieve them. Helping the displaced and civilians, healing their wounds and standing by them becomes then more than just a personal goal,” he said.

In addition to the conflict in the last year, the COVID-19 pandemic has greatly impacted the White Helmets' work.

“The infrastructure is destroyed and there are no services and more than 1.5 million live in tents. The challenge is huge,” he said.

Super-powers have even become helpless when it comes to combating the virus as the capacity to respond to the pandemic is directly affected by the availability of resources and the general situation in northern Syria. The deteriorating economic conditions make the application of prevention and social distancing measures extremely difficult, in an area considered one of the most densely populated parts of the country due to the forced displacement of millions of Syrians. Social distancing measures cannot be applied, which spells catastrophe, especially in camps where over 1.5 million civilians live and suffer from deteriorating economic conditions and lack of basic services, which could lead to an outbreak of the virus.

“A large part of the Syrian Civil Defense’s efforts was harnessed to respond to the virus through sterilization and awareness, transporting the infected and burying the dead, which is not easy and requires training and specialized teams,” he said.

Considering that the airstrikes never stopped, the situation seems like it can't get any worse.

The motto of the White Helmets is a verse in the Quran that reads: “To save a life is like saving all humanity.”

“We save a soul, irrespective of affiliation, race or religion. There is nothing greater than saving lives and giving them a chance to live again. The highest thing that a person can do in life is to be a reason for the perpetuation of the life of others,” al-Saleh said.

Since the beginning of their work, the White Helmets volunteers have managed to save more than 124,000 civilians from under the rubble.

Around 3,000 volunteers, including more than 260 women, are working in Syria now. Since 2013, 291 volunteers have been killed in attacks.