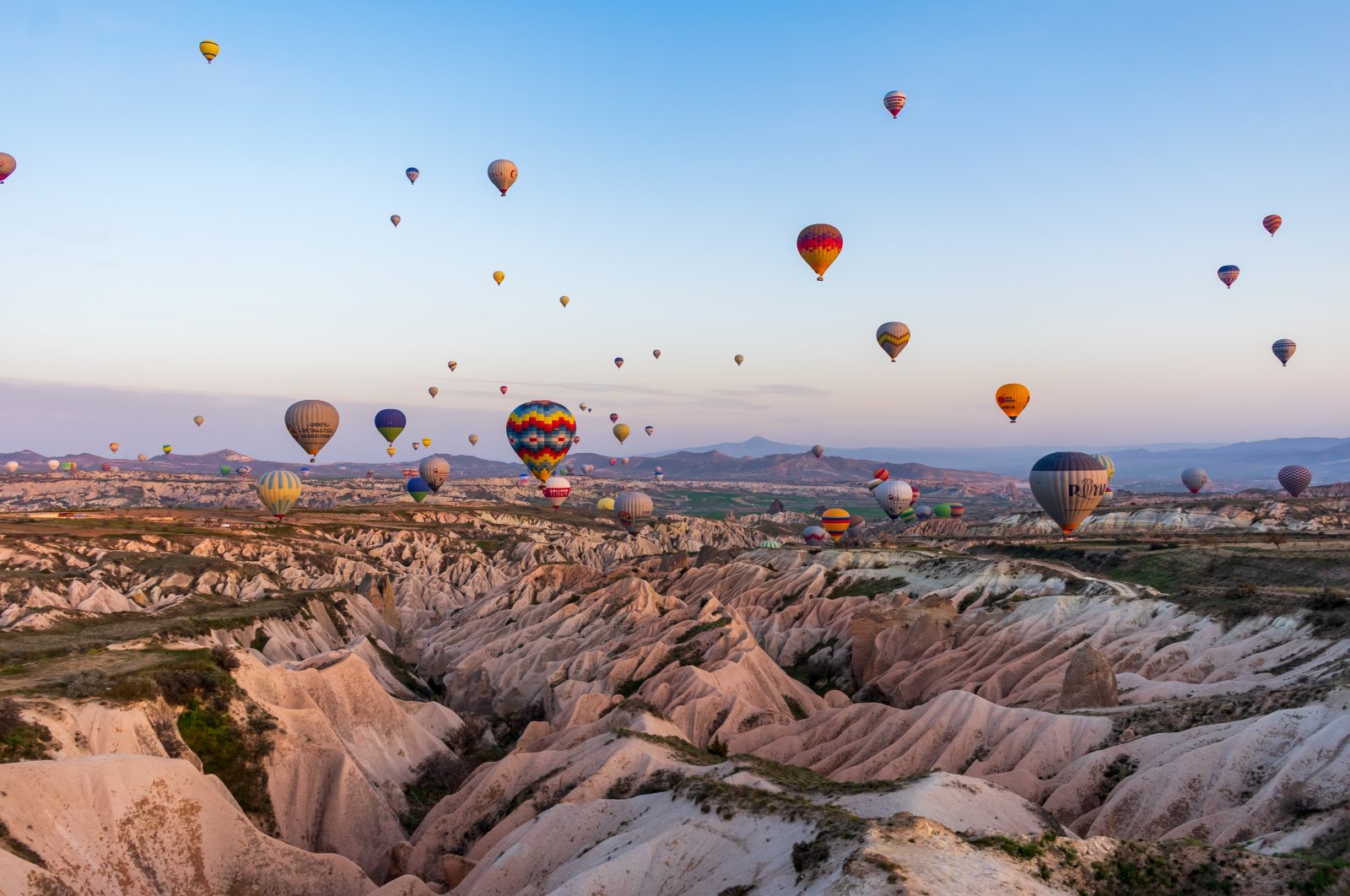 One of Turkey's most important tourism centers and a UNESCO World Heritage Site, Cappadocia is a magical place where nature and history integrate into the vast landscape that attracts millions of tourists every year.

Famous for its geological oddity of honeycombed hills, fairytale scenery, cave dwellings, remarkable rock formations carved from volcanic ash and hundreds of hot air balloons soaring in the sky at sunrise, the region, which boasts unique 30 valleys, has attracted 2 million tourists in the first 10 months of 2021, according to official figures.

Such is the love for these crafts that almost the whole of the 35,000 population of Avanos has mastered either weaving carpets or shaping delicate pottery. One may be a top government officer or an executive of a multinational company, but learning the art is a must.

Tuncer Kayıkçı, a local who also works as a tourist guide, told Anadolu Agency (AA) that a man must know pottery to get married, and a woman will only find a partner if she knows the art of weaving.

“While children are sent to schools to learn modern education, parents make sure that they learn pottery or weaving as well,” he said.

The patterns and designs produced in this town have adorned iconic structures in Istanbul like Topkapı Palace, Sultan Ahmed Mosque and Selimiye Mosque, besides various other structures.

“The most important reason these patterns have stood the test of time and are still fresh today after many centuries is that the clay in the region has a considerable amount of quartz in it,” said Zeki Dincer, the owner of Sultan Ceramic – a large factory and showroom situated in a cave.

The Kızılırmak River, which runs through the town of Avanos, brings this unique red mud, which craftspeople shape into distinctive forms that make the town famous for its pottery.

Such is the attraction of tourists to this area that in the nearby town of Göreme, there are barely any local residents. They have converted their dwellings into hotels because they are located near the famous fairy chimney rock formations. The town hosts some 400 hotels and all are filled to the brim in tourist season. During the COVID-19-related restrictions, the area became a ghost town, though it has of late come to life again.

“Before COVID-19 in 2018 and 2019, we received an average of 4 million tourists a year. But then everything dried up. We are now hoping to revive our businesses,” said Ayaz Bilici, who owns a tea stall near the Göreme heights, where one can get a panoramic view of the valley.

This year among the famous visitors who brought hope of revival of tourism were famous Indian film actors Salman Khan and Katrina Kaif, shooting the title song for the upcoming movie "Tiger 3" in Cappadocia.

Geologists say the Cappadocia region was formed 60 million years ago by the erosion of soft layers of lava and ash from Mount Erciyes, Mount Hasan and Mount Güllü. The Kızılırmak River runs through the region on the north, the Taurus Mountains to the south, the Kayseri plain to the east and the Lake Tuz salt flats to the west.

Driving from Ankara through the plains of Nevşehir, one can find small volcanoes scattered throughout the area.

According to geologist Stev Eckert, the mammoth eruption that spewed the rocks that now form the fairy chimneys is thought to have started 11 million-12 million years ago and reached its peak 6 to 7 million years ago. He believes that clouds of ash may have reached over 25 kilometers (15.5 miles) into the sky at the time of the eruption.

“The sound of the explosions could probably have been heard as far away as in Spain and Moscow. The rocks tell us that it was extremely large and included violent explosions,” the geologist wrote in the book "Fairy Chimneys of Cappadocia: Evolution of a Landscape."

Among the numerous valleys, the Zelve Open-Air Museum is an amazing cave town, honeycombed with dwellings as well as religious and residential chambers. It was closed to the public for a week in September to allow the shooting of an Indian film. The 2007 Hollywood movie "Ghost Rider," based on the Marvel Comics character and starring Nicolas Cage and Eva Mendes, was also filmed in this cave town.

According to Kayıkçı, people lived in caves in this area until five decades ago. The presence of a cave mosque and church attests to the fact that Christians and Muslims lived harmoniously together in the area.

“Then Christians had to leave the valley because of the exchange of minorities between Greece and Turkey,” he said. The rest of the population was forced to evacuate the valley in the 1960s due to erosion. They left the site to set up a modern village a short distance away, which they named Yeni Zelve (New Zelve).

The Zelve may be a ghost town due to the ongoing erosion, but tourists flocking to the site and climbing rocks make it a happening place.

On the other end in Devrent Valley, also known as the Valley of Imagination, there are no caves; however, the rock formations have taken on a variety of shapes, leaving room for visitors to use their imaginations to decipher them. There are rocks shaped like a camel, a horse, a marching army and a bird. One of the rocks even resembles the famous picture of French military and political leader Napoleon Bonaparte giving orders to his troops.

But the best view in Cappadocia is at sunset from the Uçhisar Castle – located in the middle of the small but beautiful town of Uçhisar. Approximately at the height of 100 meters, the castle is housed in two giant fairy chimneys. Across the bottom of the castle, residents have built their houses inside the mountains.

Who says cavemen have become extinct? Many residents in Uçhisar still live in caves – but these caves have modern amenities. In fact, cave houses are costlier than normal residences, and the local government enforces ordinances that ensure the original structure remains intact. But even within the strict guidelines, hotels carved inside caves have built swimming pools and spas and offer almost every modern luxury.

The history, however, comes alive in the ancient underground cities of Kaymaklı, Derinkuyu, and Özkonak. Among them, Özkonak is built into the northern slopes of Mount Idis, about 14 kilometers northeast of the town of Avanos. Its larger areas are connected by tunnels, and it contains a pipe communication system reaching each of its levels. Each carved room had ventilation provided by further piping when the city was sealed during sieges.

According to Kayıkçı, the city must have been built around the second or third centuries, when Christianity had started to become popular and Romans were still averse to it. To avoid prosecution Christian converts used to live in these away from the prying eyes of persecutors.

Local farmer Latif Acar is believed to have accidentally discovered the city in 1972 when his curiosity about the disappearance of water for his crops led him to it. When excavated, it revealed a whole city that could house 60,000 people for up to three months. Although only four floors are now open, the complex contains a total of 10 floors that extend to a depth of 40 meters.

As a measure of defense, holes were carved out above the tunnels for dumping hot oil on invading enemies. Other features of the cities include water wells, ventilation systems, wineries and moving stone doors. Kaymaklı is the widest underground city in Turkey and was awarded UNESCO World Heritage status in 1985.

Although costly for budget tourists, a trip to Cappadocia is incomplete without hot air ballooning. As the sun rises in the east, the skyline of the region is dotted with colorful balloons. The region’s potential for ballooning was first discovered by two U.S. Air Force pilots who visited the region in the '60s. But, it started in 1991 with the competition of professional hot air ballooners from all over the world. Currently, 25 balloon companies fly some 250 balloons.

“Currently, Cappadocia is considered one of the best places in the world to ride in hot air balloons. The number of balloons increases every year. However, the civil aviation authorities are very strict in maintaining standards and allow them to fly only when there is proper wind speed,” said balloon pilot Tuğrul Kaya.

That means the balloon operators only conduct flights around 200 days a year when the weather conditions are just right. To ensure safe flights, the pilots earn a license only after completing a two-year course in the flying club.

Cappadocia's landscape is not just for picture-perfect postcards. The cradle of civilization brings ancient history alive in this wonderland, where a visitor is transported back to ancient eras.