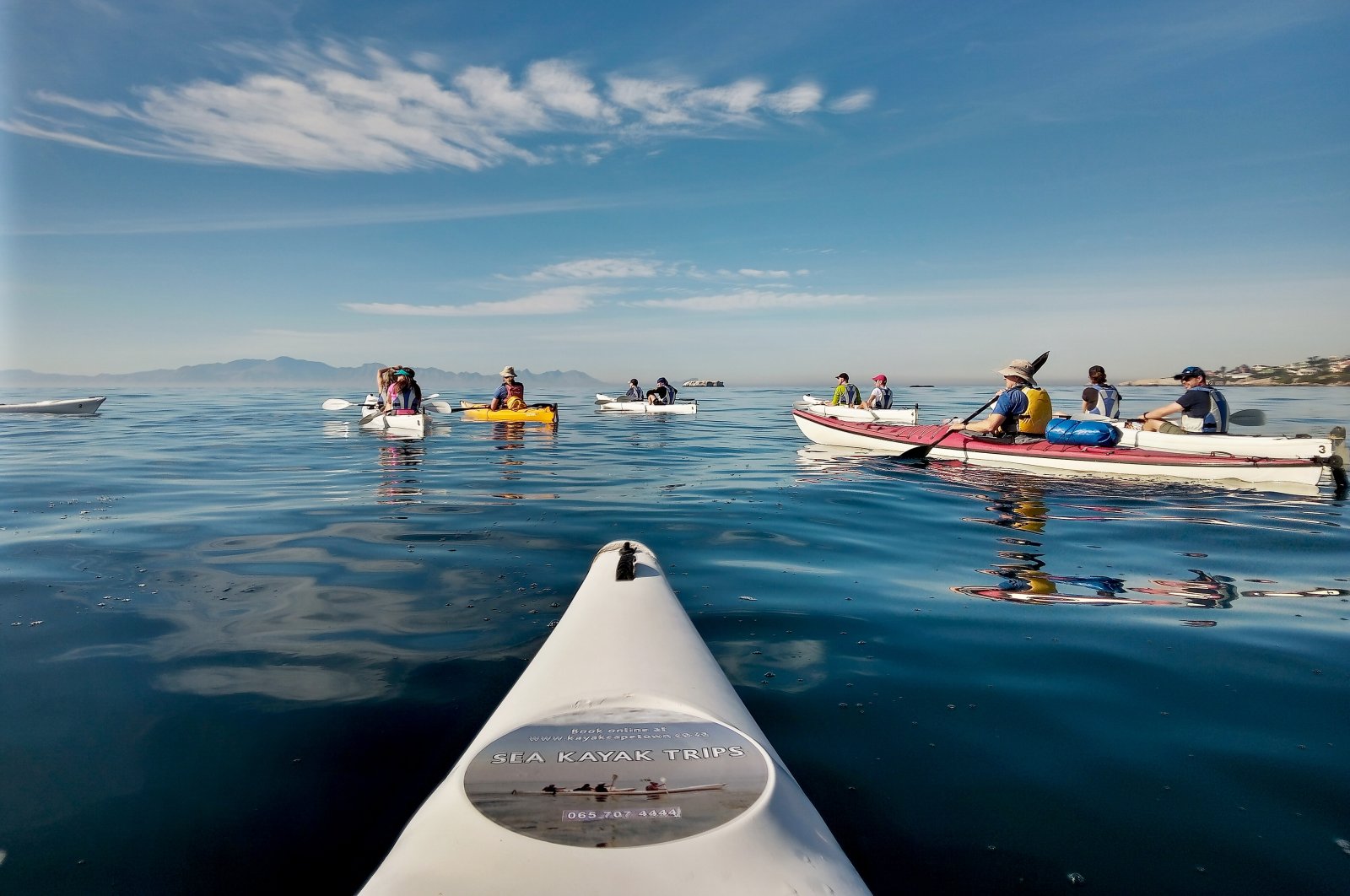 Boat excursion at the Cape: In two-person kayaks you head out into a smooth sea. (Christian Selz/dpa Photo)
by German Press Agency - DPA Sep 20, 2021 10:54 am
RECOMMENDED

The peninsula at the Cape of Good Hope is a paradise for water sports enthusiasts and nature lovers. False Bay, off Cape Town's southernmost suburb of Simon's Town, is smooth as glass on this bright sunny morning.

"Not the worst day for a trip out to sea," says Derek, who's been running kayak tours in the bay for 20 years.

His guests clamber into the small boats in the hopes of spotting wildlife that few would get to see in Africa.

After a short safety briefing, the group glides out to sea. They paddle past luxurious yachts in Simon's Town harbour and frigates at the naval base next door.

Derek and two colleagues accompany the tour guests, who are soon joined by a humpback whale that bobs up a few hundred meters behind the kayaks to take a deep breath.

The kayaks cut through the still water with impressive speed. Derek heads for a rock that juts out of the water a good 500 meters (547 yards) off the coast and serves as a perfect resting place for an obviously well-fed seal who is basking in the sun.

The tour's main draw however are birds that can swim just as gracefully as the fish: jackass penguins, given this name for their donkey-like calls.

This is where the only species of penguin in Africa has one of its last places of refuge, here at Boulders Beach near Simon's Town. Some 2,500 penguins live in a closely protected colony that belongs to Table Mountain National Park.

The penguins bred without disturbance on the small islets off the coasts of South Africa and Namibia for some 2 to 4 million years. Around the year 1900, there were some 3 to 4 million of them – but the number has since dwindled to 36,000.

The cause of the dramatic decrease is that people displaced the penguins from the islands by taking away the materials they need to build their nests by mining guano – and also stealing their eggs.

The penguins retreated to the mainland, where they are threatened by predators.

The birds, along with large parts of the Cape Peninsula and all coastal marine areas, are now protected by the Table Mountain National Park. Cape Town realized long ago that the penguins and the spectacular water world are worth much more alive.

Meanwhile, the seals that have gathered a few kilometers west of the fishing harbor of Hout Bay on the rocks of Duiker Island are also benefiting from this more environmentally friendly approach. Now, some 3,000 South African fur seals crowd the small island.

You can observe the seals, some of which weigh up to 300 kilograms (661.4), not only from a boat, but also by joining a guided snorkeling tour.

Guides Jami Marnitz and Sam Sivewright help guests into wetsuits and an additional waistcoat, whose purpose only becomes clear once you take the plunge into the Atlantic, which today is a bracing 12 degrees Celsius (54 degrees Fahrenheit).

Once the shock of the cold water subsides, you start to feel oddly warm – and able to focus on the fur seals, who are playful, curious and quick as a torpedo, darting again and again before the divers.

Sometimes, they pause briefly to take a look, before elegantly heading off again.

The best time for a trip like this is March and April, says Jami, when the youngsters begin to swim.

It's also fun to come during mating season in October and November, when the fur seals kiss each other "quite extensively and perform their intimate dances," she says.

There's lots to see on land, too, at the Cape. One good way to explore is to take a guided electric bike tour through the national park at the southwesternmost tip of Africa.

Cyclists can see how the coast drops away steeply to the east over rugged cliffs into False Bay.

Eland antelope weighing up to a ton and lesser bontebok can be seen grazing in the shrubland.

A female ostrich runs along the road in front of a group of cyclists. Then, just before the cape, a male ostrich performs an odd dance, dragging his chest almost across the ground and waving his wings.

"That's a mating dance," says guide Eduard Snyman, as the ostrich seeks to impress the ladies.

There are tourists gathered at a wood board with the cape's coordinates – a popular spot for a selfie before the pandemic.

As the bike motors quietly kick in, we head up the winding road to Cape Point, high on the steep cliffs. An old lighthouse still looks out, a picture perfect postcard motif.

Meanwhile, although the souvenir shop is shut, a female baboon has set her sights on a couple of bags and snatches them away from an unsuspecting couple.

Eduard Snyman has explained about the monkeys' ways but tried not to laugh. There are signs warning of penalties for feeding the animals – but the monkeys like to take things into their own hands.