Insider details: Tracking the trail of Gates and Bezos in Turkey 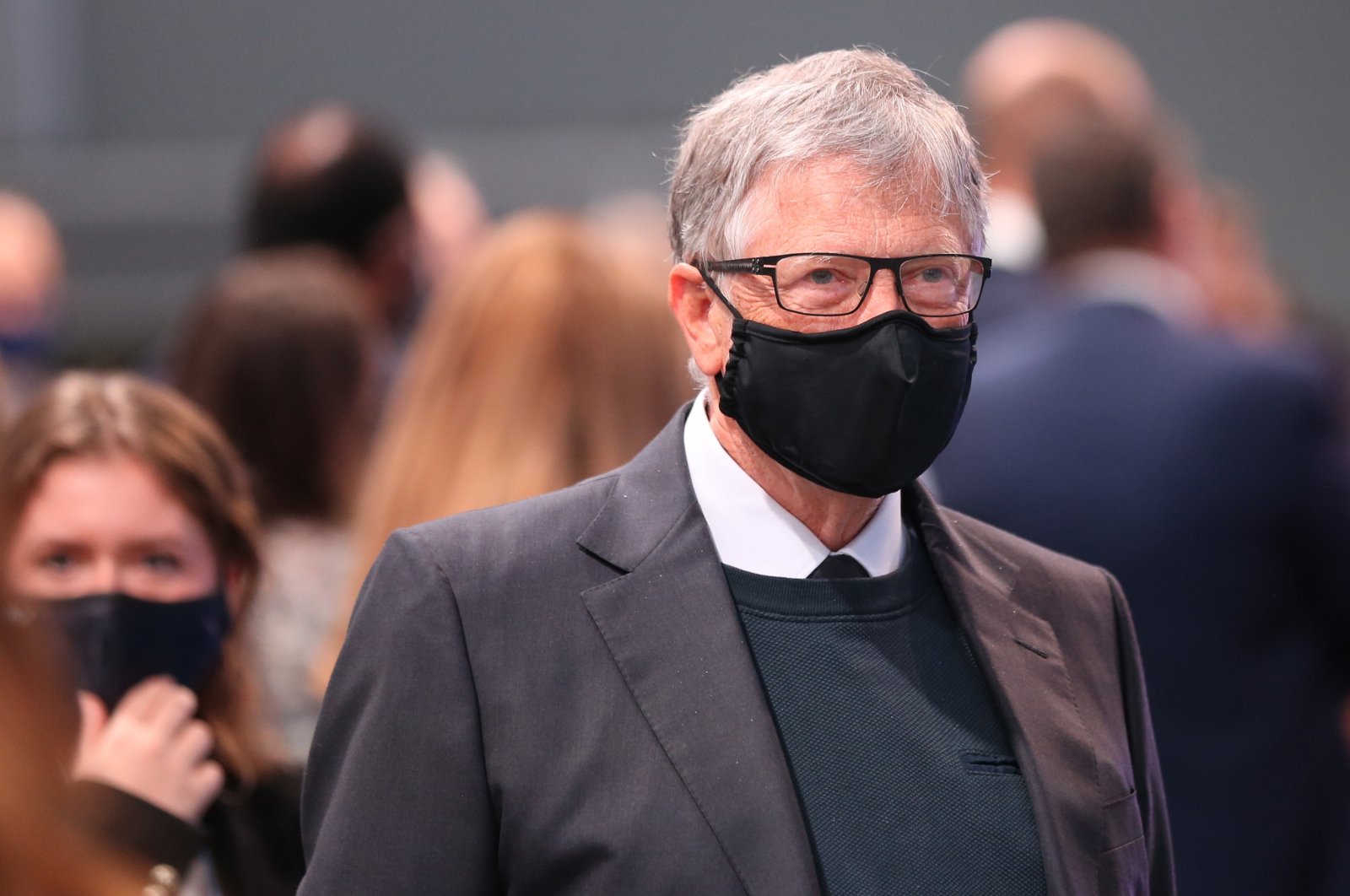 Bill Gates celebrated his 66th birthday by hosting a private party joined by Jeff Bezos in a secluded cove in Fethiye. Check out this play-by-play account of the mega-billionaires’ tour of Turkey

The extravagant arrival of Bill Gates aboard his yacht to not only tour the Turkish Riviera but also close off a cove in Fethiye for a birthday party attended by guests that included Amazon founder Jeff Bezos has literally been the talk of every town in Turkey, never mind the world.

Suddenly, the whole planet has heard of a trendy beach club in Fethiye that hosted the now infamous party held during a week both Gates and Bezos toured the Turkish Riviera aboard luxurious megayachts. The party and their docking in destinations in Bodrum, Kuşadası, Didim, Gökova, Datça, Fethiye and Marmaris are now all over the international press. But for expats that have become Turkey’s southern coastal residents, we not only witnessed their comings and goings from ashore, but many of us are also quite familiar with the destinations they visited.

Funnily enough, it turns out the “1%” like to holiday in what, for many of us expats in Turkey, are our proverbial backyards. While tracking the trail of the world’s greatest businesspeople in Turkey, it turns out that many of the spots they toured are places we, as mere mortals, can easily visit on our own accord. All of the coves they docked in, the restaurants and beach clubs they dined in, and the ancient sites they visited are easily accessible by boat, whether on a Blue Cruise or a day trip, of course depending on if you have the funds and energy.

Granted, bay-hopping the Turkish southern coastline is assumedly much easier when you have the 107-meter (351 foot) long “Lana” and the 68-meter long support vessel the “Wayfinder” carrying a supposed 30-member security detail. At a reported weekly rental price of $2 million (TL 19.4 million), the three-story Lana, which is also 16 meters wide, is claimed to have a pool, a sundeck, jacuzzi, gym and even a Turkish bath and multiple luxurious cabins, as well as over 30 staff members.

Prying eyes want to know: “Where in Turkey do they go”?

According to local press and Facebook sightings, Microsoft co-founder Bill Gates’ “Lana” and its entourage ship, the “Wayfinder,” arrived in Bodrum on Thursday, Oct. 21. The Saturday prior, Gates married off his 25-year-old daughter, Jennifer Gates, the eldest of his three children, in a fairytale-like wedding on her horse farm in Westchester County, New York.

Gates was first sighted on Monday, Oct. 22, when both luxurious yachts landed in Aydın’s Kuşadası, where Gates disembarked to head to Selçuk and the House of the Virgin Mary, his second trip to the site after his first visit in 2005. Gates and his former wife Melinda had vacationed in the Marmaris region in 2005 and 2008 aboard the luxury yacht "Leander G."

According to local reports, Gates had made a prior reservation to tour Ephesus and thus when he arrived at around 6:50 p.m. accompanied by guards, the lights were turned on at the ancient site. Local reports state that a technical team conducted testing and maintenance the day prior to his visit. Gates is claimed to have taken off his hat and mask while touring the premises with a guide. The tour supposedly lasted over two hours after which he exited from the ancient city’s lower entrance and is purported to have then purchased $40,555 worth of Ottoman kilims and rugs from a carpet dealer in Selçuk. That evening, the yachts were spotted docked in Didim. Both Kuşadası and Didim are popular destinations for year-round and visiting expats.

On Saturday, Oct. 23, Bill Gates is reported by local press to have disembarked in Didim and proceeded to play tennis for around 80 minutes and was accompanied by five security guards, but carried his own gym bag, which was notably pointed out by the Turkish press. From there, Gates is reported to have arrived to the Flying Fox by speedboat after which a helicopter took off from the vessel and flew over the gulf of Güllük and the coves of Didim for approximately 40 minutes. Later, Gates arrived to the Hisar neighborhood with two VIP minibuses and visited Didim’s Temple of Apollon. Donning a mask and hat, Gates is reported to have comfortably toured the site, escaping recognition despite sharing the space with around 300 other foreign and domestic tourists. After taking a short walk through the town center of Didim, Gates and his entourage reportedly got back in the vehicles and drove to the ancient site of the Miletus ruins located 17 kilometers (10.5 miles) away.

On Sunday, Oct. 24, Gates and his boats returned to Bodrum and the software giant, accompanied by eight security guards, paid a two-and-half-hour visit to the Bodrum Castle and Underwater Archaeology Museum, where he supposedly stopped regularly to take photos. In the evening, Gates and his entourage were spotted disembarking Lana at a pier in Bodrum’s Kumbahçe neighborhood and from there; they are reported to have gotten in VIP vehicles to head to Göltürkbükü, Bodrum’s most upscale neighborhood popular with celebrities and the paparazzi that follow them. According to local press, Gates and his entourage dined at the Mandarin Oriental for a meal that included poached Laos and seabass as well as calamari and octopus salads. This is the second time Gates has been in Turkey over the past three months and he dined at the exclusive Mandarin Oriental in late July as well, for a meal he shared with six friends that made headlines for supposedly racking up a TL 80,000 ($8,229) bill.

Local reports claim that on the morning of Monday, Oct. 25, the luxurious yachts were spotted in Marmaris’ Hisarönü. At around noon, they were said to head to Selimiye and Bozburun. From there, they are reported to have visited Emel Sayın cove and then anchored somewhere between Selimiye and Turgut.

On the 27th, the Lana and Wayfinder made their way to the Karagözler neighborhood of Boncuklu Bay, which is on the other side of a peninsula across from the town of Fethiye. On the day of his birthday, Bill Gates and Bezos, joined by the latter’s girlfriend Lauren Sánchez, were spotted hiking together at Ağa Limanı, which although technically located in Dalaman, is a spectacular slice of forested land and sea at the tip of yet another tiny peninsula across from Fethiye. It can be easily visited on the 12-island daily boat tours that take off from Göcek.

A little bit about Sea Me Beach

As for the world’s most elusive party of the year, held on Thursday, Oct. 28, on the occasion of Bill Gates’ 66th birthday; the venue may have come as a surprise to some, but not to those in the know. Having just opened last year, Sea Me Beach was already one of this summer’s hippest beach clubs, located in a secluded cove in Boncuklu Bay. The Bali-esque venue encircling a turquoise cove has hosted popular Turkish acts such as alternative rock star Evrencan Gündüz and is famed for their happy hour beach parties led by female DJ duo Cielo.

The beach club is divided into two sections, one for families and the other "adults only." There is an international café and a sushi restaurant on the "adults only" side. The beach is outfitted with relaxing rustic furniture and sunbeds covered by wicker umbrellas. There are large pillows strewn about and even larger statues of heads and artistic branch formations, all making for the perfect Instagram moment. The cost to lounge on a sunbed ranged from TL 100 to TL 150 and it was wise to get there early. The menu at the main restaurant ranges at around TL 60 for breakfast items, around TL 80 for pizzas and pastas while the mains clock in at the highest at around TL 130, while most sushi rolls hovering over TL 100.

The party in question is said to have lasted four hours and the 50 guests at the party, including Amazon founder Jeff Bezos, were reported to have dined on international fare including sushi, pizza, seafood and champagne. Staff were supposedly restricted from using their phones to capture the event. Sea Me Beach is said to have won out amongst a number of other potential party sites in Fethiye, a list which supposedly included Ölüdeniz, Kelebekler Vadisi (aka Butterfly Valley), Kayaköy amongst others in the Fethiye region.

As for Gates’ guest of honor Bezos, the 57-year-old richest man in the world, who succeeded Gates for the title four years ago, has also been hopping from bay to bay on the Flying Fox, which was spotted in Akbuk in the Gulf of Gökova and in Bodrum. Bezos reportedly returned to his megayacht, docked in Gökova, by private helicopter. Throughout the week following the party, Flying Fox was spotted in Bodrum’s Yalikavak, Yalı and Cennetkoy.

If you thought Lana was huge, the Flying Fox is even more massive, at 135 meters long, it is the world’s most expensive charter boat for rent at a whopping 3 million euros ($3.4 million) a week. But, no worries, as Bezos is alleged to own the vessel that comes with a 12-meter long swimming pool and its own beach club, 36 rooms and two helicopter pads and is six-stories high. Bezos also toured Turkey’s southern coast aboard Flying Fox in 2019, same year as its delivery. Meanwhile, the week prior to Bezos’ arrival to Turkey, his Blue Origin, a space tourism company, announced plans to launch a “business park” in space called the “Orbital Reef” by the end of the decade.

In the aftermath of the party, Gates and his luxurious yachts returned to Bodrum and local reports claim he had breakfast in the garden of a villa of a prominent Turkish businessperson in Cennetköy on Oct. 31. On Monday, Nov. 1, while Gates was in Glasgow, Scotland for a climate summit, Lana was seen docked in Türkbükü.

The Flying Fox departed for Limassol, Greek Cyprus on Nov. 5, but not before three vehicles full of gifts and flowers were spotted being delivered to the vessel at a pier in Kumbahçe. The delivery of each item from land to boat reportedly took nearly 20 minutes. Local reports claim this was a gesture organized by Gates’ advisors as an expression of gratitude to the captains and crew of the three ships.

Both mega billionaire businesspeople-turned philanthropists have been criticized in the press for Gates' birthday bash, labeling the duo as “climate hypocrites” for calling for action on climate change while waltzing around on megayachts. The international press is also circulating the speculation that Gates is in Turkey’s Aydın and Muğla regions with the intent of purchasing significant land to build a large sustainable farm. A headline in the NY Post wraps it up by reading, “Bill Gates shops for climate-saving farm – aboard super-polluter yacht.”

Fan or not, let’s face it: the news surrounding the duo is fascinating, especially when it affirms what we already know, which is that Turkey is definitely one of the most spectacular places in the world.