Travels of a solo Pakistani girl: To the stone hills of Mardin 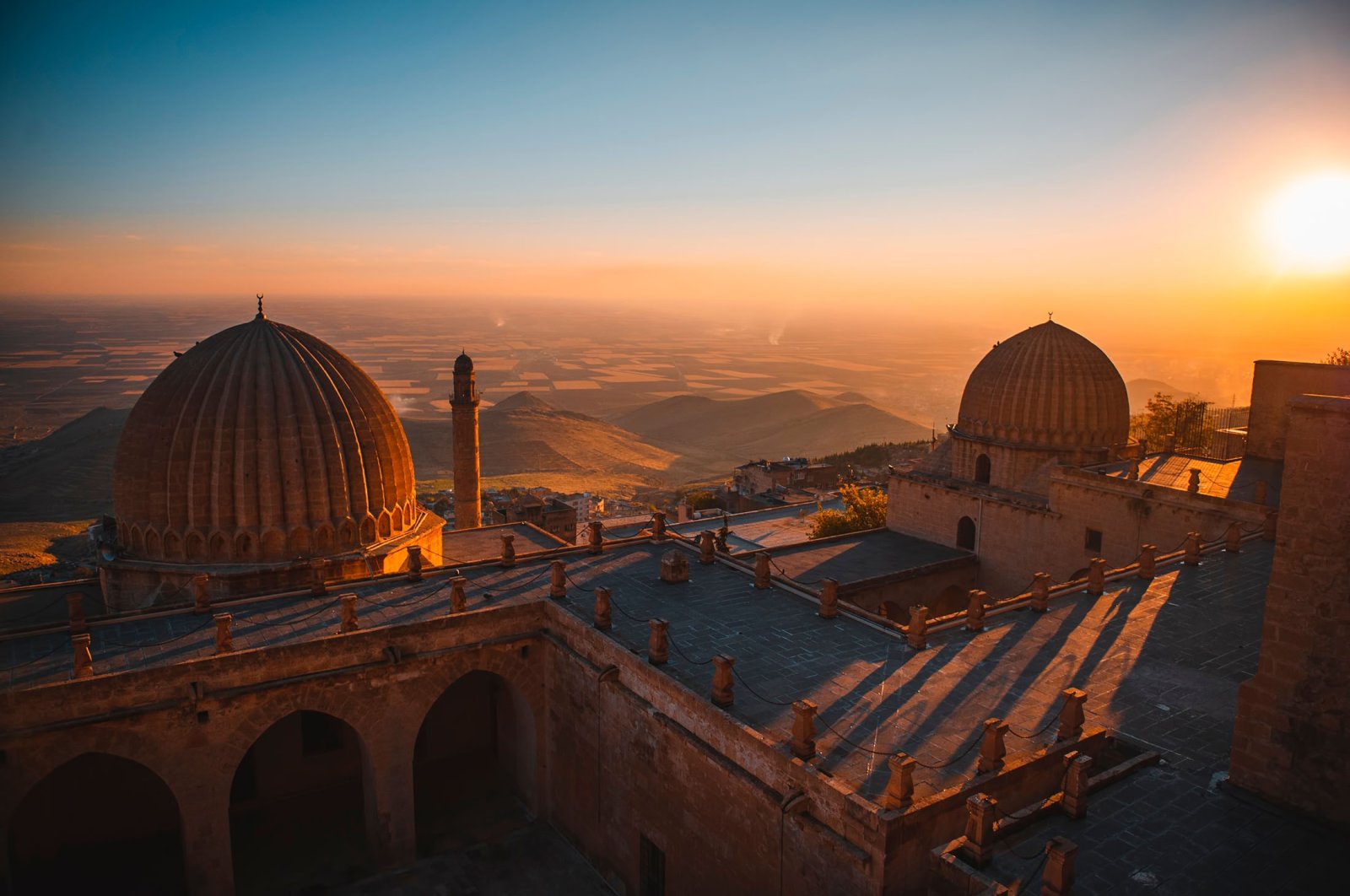 Mardin landscape at sunset with the minaret of Ulu Cami, also known as the Great Mosque of Mardin. (Shutterstock Photo)
by Aiza Azam
Jul 30, 2021 9:16 am

An unforgettable trip to an ancient Mesopotamian city that has existed at a centurieslong cross-point of Assyrian, Ottoman, Kurdish and Arab cultures

Some time ago, Turkish DJ Mahmut Orhan released a track titled "6 Days," a remixed version of the 1971 song "Six-Day War" by the English rock band Colonel Bagshot. Orhan’s version consisted of haunting music against a backdrop of mysterious images: an older woman staring into the distance, a beautiful girl in traditional dress, a man riding his horse across a dusty plain with his robes flowing behind him. The most memorable parts of the video were vistas of an ancient city carved in stone. Fascinated, I did some quick research and discovered that the reel had been shot in a place called Mardin.

This was my introduction to the ancient Mesopotamian city. When I decided to visit Turkey three years later, Mardin was the first name I wrote down on my list of places to see.

Lying in the heart of Southeastern Anatolia, the city has existed for centuries at the confluence of the Assyrian, Ottoman, Kurdish and Arab cultures. The immediate region surrounding it is steeped in history, evidenced by scores of ancient ruins, some of which have been well preserved. To the foreigner, its rich cultural heritage is immediately evident in its people's mannerisms, dressing, cuisine, and speech. If you listen to a group of locals chatting in Turkish, even the untrained ear can pick up an Arab lilt to their dialect.

A long trek and the final destination

I had left Konya on an overnight bus, which reached the outskirts of Mardin more than 11 hours later. From the station in the new city, about half an hour from Mardin proper or "Eski şehir" (old city), you drive up a winding road that cuts through enormous sepia mountains and brings you to a second bus station. Here, either a shuttle bus (dolmuş) or a cab that takes you to the center of the old town, which is roughly a 10-minute drive away.

The elderly lady who had sat next to me on the bus from Konya learned I was headed the same way she was and offered to take me along. Her name was Ameena, and her son Jibrael was waiting to receive her at the station. This was a remote region, as far from cosmopolitan life as you could get, with barely a smattering of individuals I could communicate with in English. Yet, I felt no apprehension as I set off toward the hills in a cab with a family of strangers.

Our taxi deposited us on a dirt road several meters above the highest dwelling in the city. Aided by members of Jibrael’s family, we descended carefully with our luggage toward their house, along an unpaved path cut into the mountainside. I was asked in for a quick breakfast and obliged. We sat traditional style on the floor, as Ameena quickly laid out tomatoes, fig jam, butter, cheese, bread and lahmacun. We ate and drank tea while their neighbors popped in to say hello. With breakfast over, I thanked them for their generous hospitality and took my leave; Jibrael kindly picked up my luggage and led me down toward my hotel. Like most other boutique outfits there, the accommodation was in a traditional house that had been converted to serve tourists. As I waited to check-in, I went to the rooftop terrace for my first view of Mardin’s surroundings, an enormous expanse of sun-baked plain swept by strong winds, with minarets dotting your line of sight in all directions.

Once I had freshened up, I set off to explore the old bazaar close to the hotel. It meant weaving my way through a warren of passageways crowded by bakers carrying huge tin trays to and from their ovens, shopkeepers enticing potential buyers with colorful scarves, and older men sitting in the shade smoking cigarettes. Somewhere in amid all this, I came across a mosque and quickly ducked in for zuhr (afternoon) prayer before heading up to the main street.

The main avenue runs all the way through the old town and is lined with shops, most of which sell jewelry, soaps, utensils, perfume, coffee and candy, all of which are creations specific to this particular area. The restaurants along the way offer largely traditional fare and are heavy on meat dishes. On either side, uphill and downhill, there are houses, boutique hotels, mosques, churches and crafts shops accessed by way of stone steps connecting narrow streets. Wandering in and out of them allows you to get an excellent sense of local life, and is a welcome escape from the onslaught of foot and vehicular traffic on the main thoroughfare.

Guided by Google Maps, I finally came to the Latifiye (or Abdullatif) Mosque, an exquisite structure rising from the dusty concrete and molded out of sun-kissed stone. Built by Abdullatif bin Abdullah in the late 14th century during the reign of the Artuqid sultans, it is a well-preserved complex and retains much of its original construction. The elaborate main entryway that opens into the outer courtyard is arguably its most stunning feature, with beautiful geometric patterns carved in the traditional Islamic style.

After drinking in the sights of the mosque, I resumed my exploration of the area around it. I couldn’t help imagining I was winding my way through the streets of Agrabah, the fictitious town from Disney’s "Aladdin," dodging a hungry cat here, a curtain of laundry there, stumbling upon a view of the plains below every now and then; this was fun! A number of streets, especially those situated uphill from the main road, are decorated in Instagram-worthy style; think passageways adorned with colorful lanterns, or bright clay planters suspended from trellises covering an entire walkway. It is almost addictive, a maze you want to burrow deeper and deeper into.

It must be said that these jaunts up and down the steps of history, and beneath the unforgiving Mardin sun, can work up a raging thirst very quickly. Luckily, I found a juice shop nearby. The owner took ice-cold oranges straight from the freezer and quickly prepared a tall glass of citrusy heaven; he barely had time to prepare a second one before I polished off the first. Outside, a police officer on his bike, winding his way through mid-day traffic, was speaking into a megaphone, reminding people to keep their face masks on. Pandemic safety first!

Having quenched my thirst, I decided to go to the local museum and perhaps visit a church. As it happened, the museum was closed (due to fixed hours). Disappointingly, none of the many churches in the city were open to tourists at the time; I found the same sign was affixed to the doors of each one: "Closed due to the ongoing pandemic."

Eventually, I found a place for a late lunch in the form of the Leyli restaurant, accessible via a flight of stairs above the main square. It had some good reviews online; none of them, I later felt, had done it justice. An innocuous-looking door opens into a small courtyard lined with tables and shaded with trees. I chose to sit inside and stepped into the most tastefully done interior. The walls were lined with exquisite vintage paraphernalia: radios of every make, eastern and western musical instruments, typewriters, telephone sets, clocks, cameras, recording devices, phonographs, sound systems, and leather-bound books. There was even a piano standing in one nook! It was as if I had stepped into a portal that transported me from Mardin and straight into a curio shop in the heart of Istanbul.

As I went through the extensive menu, I was offered ice-cold water in a gorgeous blue vase and some warm bread to get me started. The entire setting exuded such lovely casual elegance. I decided to have güveç, a lamb and eggplant stew that came in a clay pot and was served with perfectly chilled ayran. The lamb was tender, the eggplant velvety but not overcooked, and the seasoning very reminiscent of Pakistani cuisine. I barely ate the rice it came with because I didn’t want anything to dilute the taste of that gorgeous stew! For dessert, I had harire, a traditional custard made with grape juice and walnuts. As I ate, the owner popped by; we had a friendly chat about the food, his restaurant and what local places were worth visiting.

At the end of the meal, I found myself thoroughly sated and very relaxed. I stopped in at a few shops on my way back to the hotel and then turned in for an early night. The overnight journey from Konya had been exhausting, and I wanted to be fully rested for the busy schedule I had laid out for the following day.

It would begin with an early morning visit to Deir-ul Zafaran (Mor Hananyo in Syriac, also known as Monastery of Saint Ananias), an ancient Syriac Orthodox monastery located on the outskirts of town.