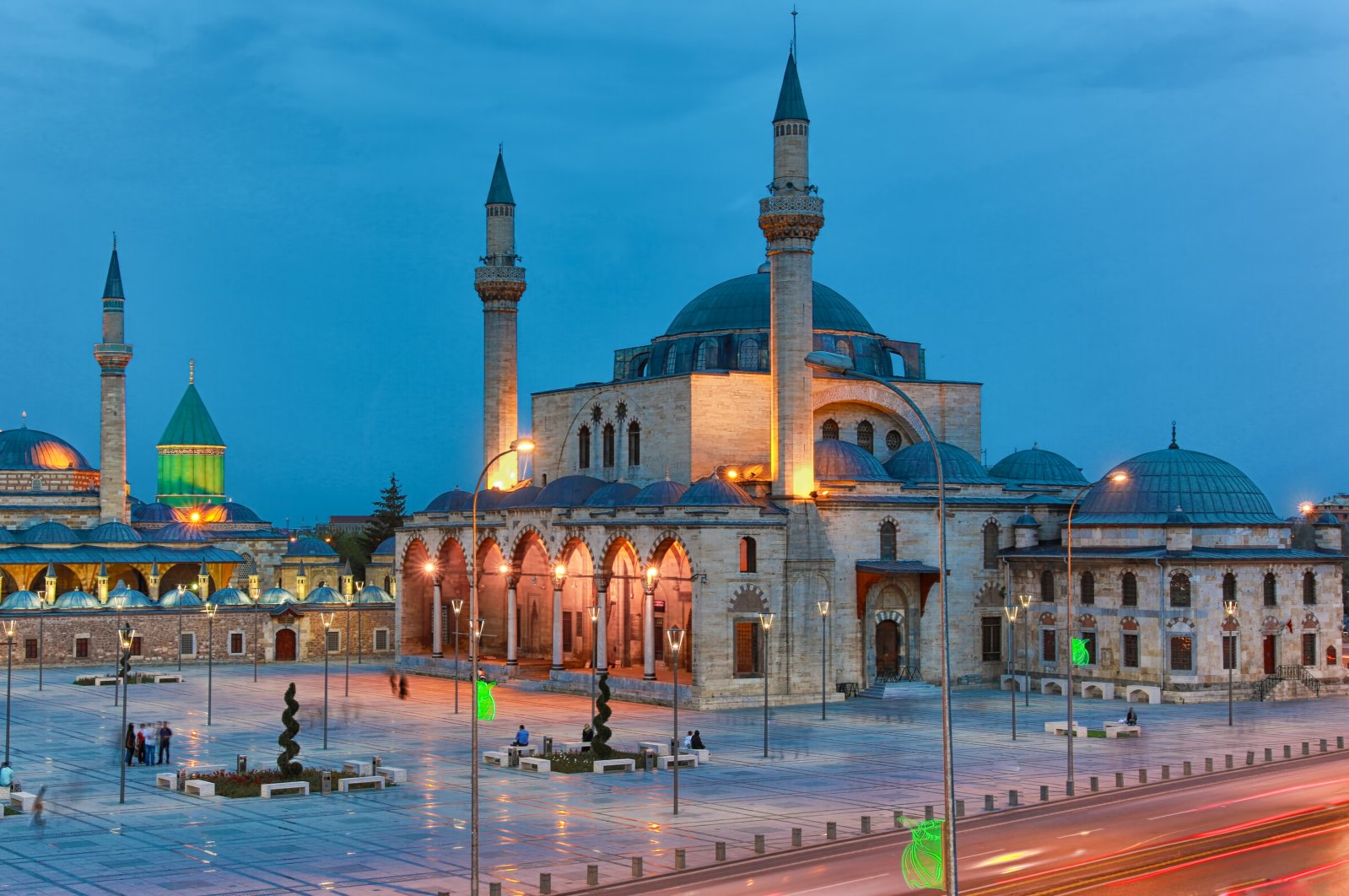 ‘You were born with wings. Why prefer to crawl through life?’ - Rumi

The next morning, having decided to leave Bursa a day early, I headed to the bus station and got a ticket for Konya. True to what I had read, intercity bus travel in Turkey is both safe and comfortable. The journey to Konya took about seven hours, but the gorgeous landscape throughout made time fly by. From rolling green mountains and hills, we descended into expansive pastures and golden wheat fields, as clouds scudded across a seemingly endless horizon.

If you plan to travel by bus, the website obilet.com is an absolute lifesaver. You simply enter your date of travel and it lists different bus companies operating on the route, travel times and durations, available seats, and even advises which side of the bus will face the sun during your journey.

By the time I reached my hotel in Konya, it was already sunset and I had just enough time before curfew to go outside for a quick dinner. This turned out to be a delicious bean stew, perfectly spiced, with plenty of warm bread. Happily fed, I hurried back to my room and locked in my plans for the following day.

Of Sufis, saints and sultans

When you think of Konya, you think of Jalaladdin Mohammad Balkhi, more popularly known as Mevlana Jalaladdin Rumi. A 13th-century Islamic scholar and jurist of great regional renown, he was the son of Bahauddin Walad, a distinguished theologian and jurist in his own right. The Rumi that is revered the world over today as a Sufi mystic and poet, evolved from his encounter with Shams Tabrizi, a wandering dervish.

The relationship between the two men was a collision of two intellects engaged in a common quest for higher meaning, seeking beauty in the divine. The intensity of their spiritual connection, however, scandalized Rumi’s family and repulsed his entourage. When Shams disappeared without a trace one night (the circumstances of his fate would not be established until the 20th century) Rumi was beside himself. This loss and the longing that grew from it would create his most prolific and beautiful works of poetry.

I reflected on this as I took the 10-minute walk the next morning to Rumi’s mausoleum, housed within the Mevlana Museum complex. The entryway leads to an L-shaped hall, and at its center lies the enormous sanduka, a type of cenotaph placed over Rumi’s burial chamber. The green brocade covering it is embroidered in gold with verses from the Quran, and it lies directly beneath the distinctive green dome of the mausoleum. Standing close to it is the sanduka of Rumi’s father, an exquisitely carved structure of Seljuk skill, twice the height of Rumi’s own. On either side lie the coffins of family members and distinguished members of the Mevlevi order.

The atmosphere inside the mausoleum is at once alive and hushed. You hear reverent whispers of Rumi’s admirers interspersed with the soft sobs of a fierce devotee, while the tourist angling for a selfie stands shoulder to shoulder with those offering Fatiha, the first surah of Quran, for the long-deceased. It is a short visit, but one that makes quite an impression. You get a sense of what the Mevlana means to different individuals and the depth of feeling each of them carries for him.

After this, I went towards the Selimiye Mosque standing in an enormous square adjacent to the museum. Constructed in the latter half of the 16th century, it was commissioned by Sultan Selim II and is an impressive manifestation of Ottoman architecture. Graceful archways float above the portico and the main entrance, leading to a large, beautifully appointed interior.

Konya is also famed for the original Sema, the traditional religious ceremony performed by whirling dervishes. Having read that the Mevlana Cultural Center hosted an evening performance each week, I set off towards it hoping to determine whether the pandemic had affected the regular schedule. It is roughly a 20-minute walk from Mevlana Museum, but the entire path has no shade. I discovered this the hard way, with nothing but sunglasses for protection from the very bright sun. Nevertheless, I pushed gamely on, a firm believer that the only way to see a city properly is either by walking through it or hopping onto a bus and letting it take you wherever. Unfortunately, when I finally reached the building, I was told that no performances had been scheduled for over a year due to the pandemic. This was a miss I regretted.

Now, with no buses in sight, I retraced my steps but chose to go through a warren of backstreets instead of the main road. The detour offered an interesting glimpse of life in the old town. Lunch was a large cookie I picked up at a bakery as I forged ahead in search of what was said to be the tomb of Shams Tabrizi.

I finally came upon it in a residential neighborhood, standing in one corner of a small park. It consisted of a solitaire sanduka inside an average-sized, largely empty hall. The disarmingly humble structure seemed incongruent with the historic reputation of the man himself. I wondered if the relative obscurity of the monument was reflective of how Rumi’s adopted city had responded to his controversial relationship with Shams.

Having paid my respects to the famed dervish, I went back to my hotel nearby to freshen up before heading towards the city’s famed Alaeddin Hill Park. My plan was to visit two other monuments on the way, the Sırçalı Madrassa and the Ince Minareli Madrassa; but as luck would have it, both were closed. The park, nonetheless, was a good choice. Strolling up and down the walkways of this huge green expanse, I made my way to Alaeddin Mosque, situated at the opposite end. Just below the mosque is a large terrace cafe decked out with comfortable chairs and tables. It also lies two flights of stairs above one of the city’s main thoroughfares. This is a lovely spot to rest on a warm afternoon. I sat there a while, refreshing myself with a cold drink as a gentle breeze whistled through the trees, watching the streets teeming with life below me.

As we inched closer to sunset, I headed down and in the direction of the Aziziye Mosque, a gorgeous edifice that quickly became my favorite building in the city.

Located in the vicinity of Konya’s grand bazaar, the mosque was constructed in the late 17th century. I had stumbled upon it the night before when I went out for dinner and was struck by its unusual architecture. A mixture of the baroque style and the traditional Ottoman aesthetic, it features towering windows on all sides through which the sun pours in during the day. At night, the cut stone exterior has a medieval quality to it, strangely reminiscent of some of the humbler buildings in the old city center of Florence.

I offered the Maghrib (evening) prayer here, and then headed to a traditional restaurant nearby. Dinner consisted of lentil soup, fırın kebap (a Konya specialty of tender lamb chunks on soft pide bread) and a cold steel tumbler of foaming ayran (yogurt drink). It was a pleasant walk back and I turned in for the night.

Mevlana again and lunch with a view

The following day was Friday. I checked out from the hotel at noon, stored my luggage at the reception and headed once again to Mevlana Museum. This time around, I stood in a corner opposite the tomb, reading Rumi’s poetry on my phone and wondering what had brought each of the people around me on this pilgrimage to the great mystic’s abode.

When the call for Friday prayers issued forth, I headed to Selimiye Mosque. Despite its size, the mosque was overcrowded, at least the women’s section. Once prayers had concluded, and with time on my hands, I decided to take a leisurely lunch at Mevlevi Sofrası. To reach it, you walk to the end of the square opposite the main entrance of the mosque and turn right. A colorful sign on a boundary wall advertises the restaurant, which is located on the terrace and has a panoramic view of the Mevlana Museum and Selimiye Mosque. As I climbed the stairs, I had no inkling I would be having one of my most cherished meals in Turkey.

It began with bamya çorbası, a heavenly soup consisting of a piquant tomato base, filled with baby okra and mincemeat. I had no idea you could do such wonderful things with okra! Next, on the waiter’s recommendation, I had Konya karışık. This is a kind of pide (flatbread) specific to Konya, which is topped with ground meat, tomato, peppers and cheese; it was served piping hot with lashings of melted butter dripping down the sides of the perfectly crispy base. The best part, dessert, was a revelation unto itself, both in presentation and flavor. A generous circlet of the most delicate filo pastry was filled with rich cream and sprinkled all over with crushed walnuts. The velvety interior balanced perfectly with the crisp exterior, and it was not overly sweet.

As I sat eating my meal, watching people in the square below from my perch above, I mused at the juxtaposition of a conservative house of worship standing next to the shrine of a revered Sufi. The entire experience of those two hours was absolute poetry, a harmonious combination of the perfect setting, gentle weather and a delicious meal.

Before leaving, I thanked the staff for their warm service and then went to Aziziye Mosque to offer Asr (late afternoon) prayers.

Once done, I bought some snacks from a bakery close by for the next leg of my journey later that evening. At the hotel, I picked up my luggage and headed straight to the bus station where I purchased my ticket. I had not found any flight options to suit my itinerary, so I faced the prospect of an overnight journey of more than 11 hours. But I was confident I could handle it, and figured much of the time would be spent sleeping anyway.

In my travel diary for next week, find out how I fared on that bus journey and made my way to the ancient southern city of Mardin.