World heritage in Turkey: Ephesus, a marvel of the ancient world 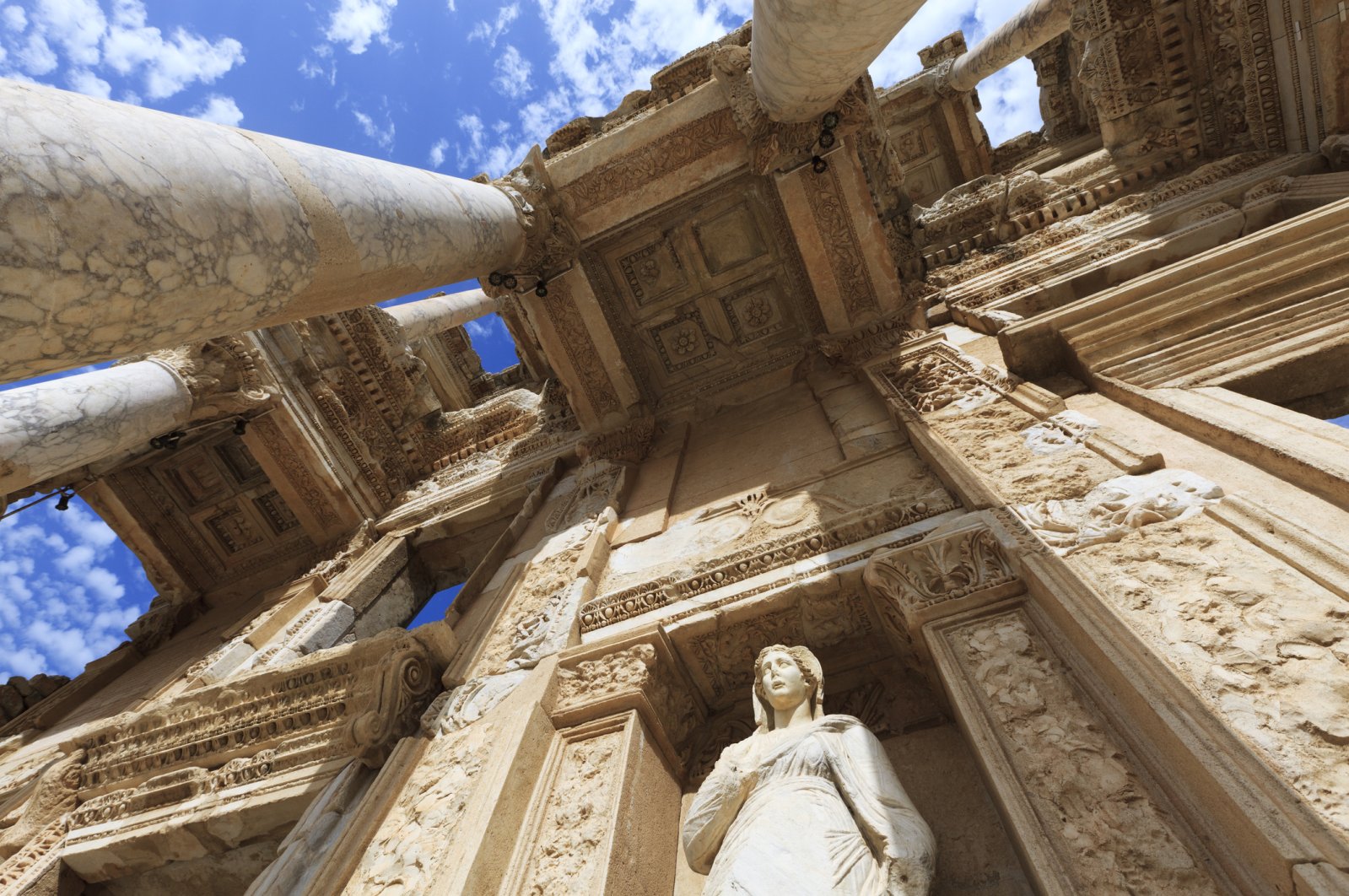 'It's not what you look at that matters, it's what you see.' Can you imagine Ephesus, one of the largest and best-excavated cities of the ancient world, in all of its former glory near the astonishing Aegean?

Where the Cayster (Kaystros) River empties into the Aegean Sea lays the ancient Greek city of Ephesus, nowadays gracing the Selçuk district of Izmir on Turkey's western shores with its glorious presence and history that dates back a few millennia.

Thanks to its exceptionally fine climate and favorable location that gave it the opportunity to become a bustling port city where trade, intellectuals and administrators would meet, Ephesus bore witness to many cultural traditions from three different epochs – the revolutionary Neolithic, the divisive Hellenistic and the influential and transformative Roman periods.

While strolling in the paved streets of Ephesus, passing by the beautiful marble pillars, the enormous amphitheater that once seated 25,000 entertainment-hungry spectators, a library that rivaled those in Alexandria and many other buildings – or whatever is left from them – it's impossible not to marvel at what was there thousands and thousands of years ago. Just take a closer look at all the details in the carvings, the intricacy in the mosaics and the inscriptions on the stones. It is easy to see the legacies left behind by the people of the old world.

Ephesus was once, indeed, a cosmopolitan center of culture, commerce and modern architecture, a convergence point of philosophy and governance, but why else does it deserve a visit and why was it added to UNESCO's prestigious World Heritage List in 2015?

Let's step back in time to see from the beginning what the first and greatest metropolis of Asia was like.

With a sprawling population that reached 200,000 at one point in its history, Ephesus was one of the 12 mighty cities of the Ionian League when it was built in the 11th century B.C.

There are two legends pertaining to its founding. The first says it was the Ionian Prince Androclos who founded it, and he chose the area after guidance from the oracles in Delphi on his quest to establish a new Greek settlement.

The second says the mythical Amazon-warrior women named the ancient city after their queen, Ephesia.

Fast forward to Roman times when it became the proconsular capital of western Asia Minor with lands that included the likes of Lydia, Caria and most of Phrygia. The city was also the center of worship for Artemis (known as Diana by the Romans), Apollo's twin and the goddess of hunting, wild animals and the moon. The Temple of Artemis, located in Ephesus, was one of the seven wonders of the ancient world. Besides Zeus, Artemis and Apollo, 15 other gods and goddesses are said to have been worshipped in Ephesus at one time.

Shrine to Muslims and Christians

In the first century, Ephesus started to play a pivotal role in the introduction of Christianity and became an important center for the religion's early days. It is from here that the monotheistic religion spread under Roman rule.

Meanwhile, 7 kilometers from Selçuk, located just outside of Ephesus, is the humble stone-built House of Virgin Mary, or Meryem Ana, as it is known in Turkey. It is now considered one of Christianity’s and Islam's holiest sites.

Legend has it that Mary, Jesus' mother, was taken to this stone house by St. John, living there until she ascended to heaven, according to Catholic beliefs.

The house was bestowed the title of an official place of Catholic pilgrimage in the 1800s after years of debates. If you aren’t still convinced of the site's holy status, perhaps you’d accept three papal visits as testament. Pope Paul VI, Pope John Paul II and Pope Benedict XVI all visited the site in 1967, 1979 and 2006, respectively.

Ephesus' irrepressible decline began in the third century when the city and the Temple of Artemis, the iconic visitor-magnet that became the lifeline of its struggling economy, was devastated by the Goths.

Then came Emperor Theodosius, who erased all traces of Artemis from the city, leaving women devoid of the many rights they were previously given, and built Christian churches from the temple's ruins.

As years passed, more and more silt accumulated in the natural harbor of Ephesus, rendering it useless and forcing people to migrate. Cue a massive earthquake, invasions and constant power struggles, and the city was left barely standing. Although it did enjoy a bit of prosperity under Seljuk rule, when Ottomans took control in the 15th century, Ephesus was abandoned and in dire straits.

The city remained partially forgotten until 1863 when archaeological studies began in the area.

And although much of the ancient objects found in excavations are now thousands of miles away – in Austria, the U.K. and Germany – far from their country of origin, the solid marble building blocks of the city and all the columns still remain in sunny Izmir. In case you were wondering, the reason why these artifacts have been scattered across the world is that the first excavations were funded by the countries in question.

The first excavations started in the 1860s and were launched by English railway engineer John Turtle Wood. These took 30 years. Then in 1895, Austrian and German archaeologists took over under the direction of Otto Benndorf and Carl Humann.

An old favorite for tourists

The fact that Ephesus and its people were mentioned in the Bible has attracted countless tourists to the area and continues to do so – about a million annually.

Ephesus was one of the first tourism centers in Turkey and in the modern sense, the world. The first tours to the area were organized in the 1920s via horse-drawn carriages, which picked them up from the nearest railway station between Izmir and the nearby province of Aydın. Although the first international visits to the area started much earlier than that, it was around those years that they became regular – especially after the establishment of the nearby Ayasuluk railway station, a stop on Anatolia's first railway line, in 1867 and a hotel in Selçuk that followed a few years later in 1873.

A word of advice

The beautiful white marble in Ephesus reflects the sun and heat so well that if you visit at the height of summer, it might be a little overwhelming for some. Late spring or early autumn really are the best times. But if you like the feeling of the scorching summer sun kissing your skin, make sure to bring your sunglasses, a bottle of water and wear plenty of sunscreen. Toward the evening though, the area blesses you with cool winds, making the palm trees sway ever so gently.

Oh, and wear shoes with good traction; years and years of walking on the marble paving stones, where previously horses were gallivanting with their chariot riders, have made them really slippery.

One more thing. For all the juicy stories the walls would tell if they could speak, you'll need a well-informed guide and at least two to four hours of your time to explore the ins and outs of Ephesus.

And if the ruins of Ephesus and the fabled House of Virgin Mary are not enough to satiate your appetite for history, fear not. The Ephesus archaeological site also contains many other historical and cultural gems such as the Celsus library, the Church of St. John the Evangelist and the prehistoric Çukuriçi mound.