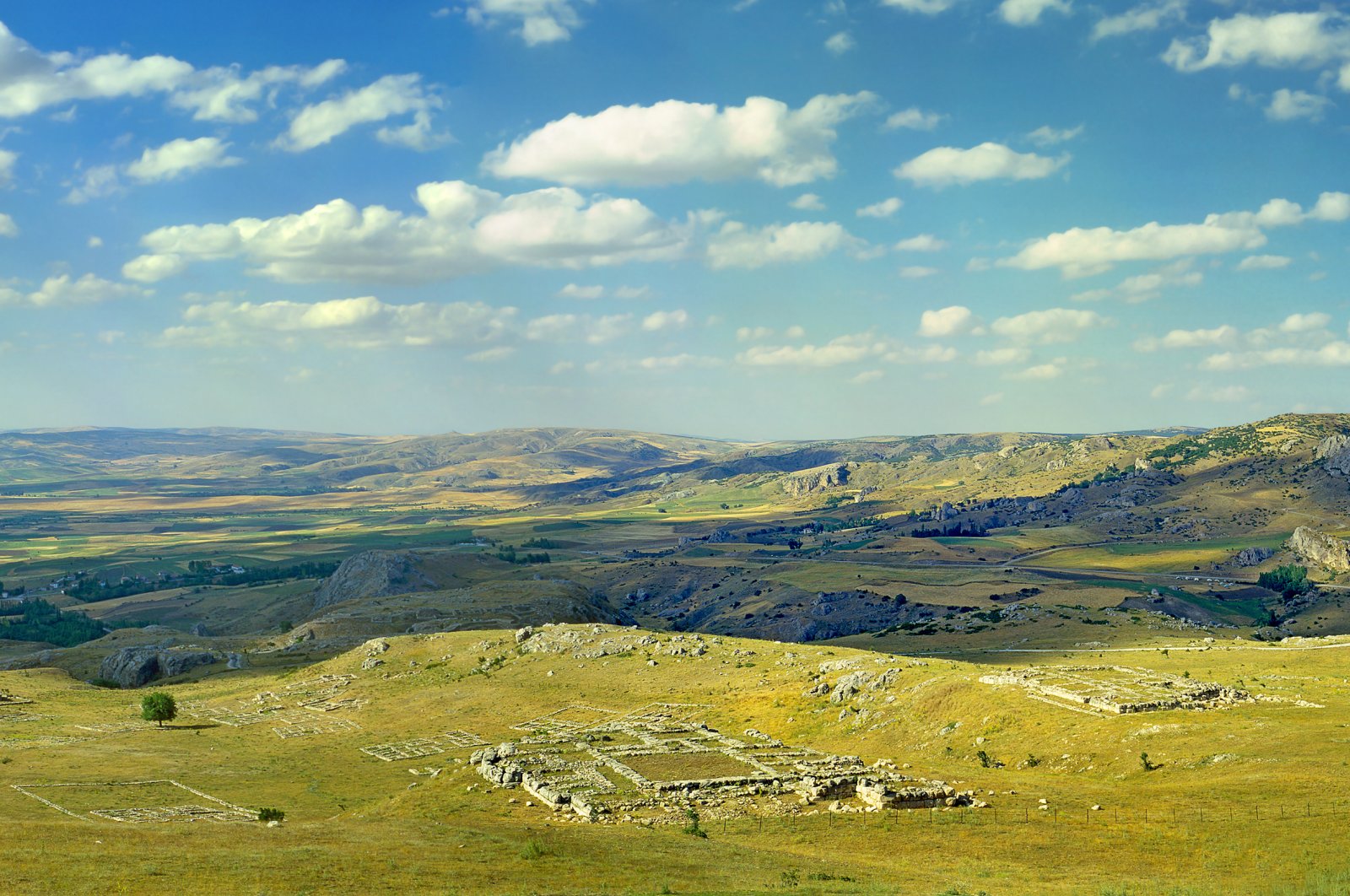 Destroyed by fire, the fall of Hattusa marked the end of the Hittite empire. (Shutterstock Photo)
by Yasemin Nicola Sakay Apr 24, 2020 3:05 pm

When you think of Çorum, you’d think it was quiet, reserved and perhaps not that interesting compared to Istanbul, Antalya or any other popular major city. But little do most know, it was once home to the mighty Hittites and has witnessed many historical firsts

Even as far as back as 2,000 B.C., we humans needed to assert our power, revel in a sense of belonging and show a semblance of purpose – hence, we engaged in warfare. The psychological origins of this desire to clash and its devastating aftermath aside, it also brought along the need for peace treaties. From endless war, conflicts and bloodshed were borne the need to establish lasting peace, and so consequently, treaties of armistice and nonaggression had to be signed. And that’s how we first came to know the Hittites, one of the most mysterious and powerful civilizations in Anatolian history.

In the year 1,280 B.C., after almost two decades of fighting, the Hittite Empire signed the treaty of Qadesh with the Egyptians, both superpowers of their time. This formal agreement would later come to be known as the first written treaty ever.

However, to this day, we still know very little about the Hittite community and the way they lived.

We know that they were one of the greatest military powers of their time – after all, they went head-to-head with the great pharaohs of Egypt, such as Ramesses the Great, before their power was finally put in check by the world’s first peace treaty.

We know they were Indo-Europeans and enjoyed considerable influence over the civilizations of Anatolia, presiding over an empire that stretched from the Dardanelles all the way to northern Syria, dominating vital trade routes along the way.

We also know that they left behind some amazing artifacts, including palaces, temples and fortresses, and although most are in ruins, they have served as historical evidence of the empire’s magnificence.

We can tell they had a rather spiritual way of life and were of a secretive nature, preferring to cremate and hide their dead. Only a small number of royal burial grounds and a few bones have been found to date.

It’s hard to say exactly when the Hittites entered the world stage but clay cuneiform tablets and diplomatic letters point to around 1,600 B.C. These heavy blocks also document the decisions taken by their Pankus parliament, which provided oversight to the monarch and hence represent the first solid evidence of democracy in history.

The empire rose with the invention of the alphabet when humanity transitioned from the Middle to the late Bronze Age in the late 14th and 12th centuries B.C.

And then one day, in around 1,180 B.C., their powerful empire suddenly broke apart, splintering into independent Neo-Hittite city-states, which slowly and mysteriously disappeared off the face of the earth. But thankfully the Hittite imperial capital of Hattusa remains standing to tell us part of their story.

The heart of a glorious empire

Hattusa lies in the area now known as Boğazkale and is located in Çorum in the central Black Sea region.

It is thought to have originally been founded by the Hatti tribe around four millennia ago and spawned a culture that would shape that of their Hittite successors.

The illustrious city of Hattusa was first discovered in the late 1830s, with excavations beginning in the early 1900s.

Its location was, and still is, immensely strategic – lying on the edges of a fertile plain fed by a source of life, the Kızılırmak River, as well as being enclosed by 6 kilometer-long walls and monumental gates.

Digs in the city have revealed a royal palace, 31 temples, an open-air theater and various hidden tunnels, with dozens of meters-long passageways to provide a subterranean safe haven for its people.

This shows that the city was, indeed, modern and advanced for its time.

At the height of the empire, Hattusa was comprised of two parts: the lower and the upper city.

In the lower part stands the Great Temple, the largest religious structure of the ancient empire. Meanwhile, in the upper lands, countless temples decorate the rugged plains encircled by pine trees and protected by a four-door wall. The upper city also houses the city's most notable gates: the King's Gate, the Lion Gate and the Sphinx Gate.

Greeting visitors at the famous Lion Gate are two impressive lion reliefs on either side, a great example of Hittite masonry. Just opposite lies the King's Gate, the most well-preserved of the structures, as well as the Sphinx Gate to the south, with only one of the four original statues of the lion-bodied, eagle-winged and human-headed creatures still standing at its entrance.

Archaeological excavations to uncover more layers are still underway in the city, which was declared a UNESCO World Heritage site in 1986.

The ruins of Hattusa also host a rather interesting object – a mystical rock that lures countless tourists every day (or at least it did before the coronavirus restrictions). The great green glassy stone at the Great Temple complex is perplexing, as neither its history nor its origins have yet been identified.

It is thought to have been made from serpentinite or nephrite (jade), and although such stones aren’t rare in the region, the fact that this one has managed to survive to this day in one piece and is significantly different from others in the area has attracted a lot of attention.

Locals have long referred to it as a wishing stone, yet archaeologists have still been unable to confirm its purpose.

What else to do?

Just 2 kilometers from Hattusa, the Yazılıkaya Temple is easily one of the most spectacular open-air temples to visit. The temple opens up into two cave chambers and its walls are adorned with the reliefs of the 12 Hittite goddesses and gods.

While in Çorum, also make sure to stop by at the local museums: Alacahöyük (named after Turkey's first national excavation site) and Boğazköy, to see the two restored sphinxes from the city's gates, along with other relics.

Also, why not go for a stroll in the historic streets of Çorum's İskilip district and set off on the ancient Hittite route?

Plus, you might as well make the most of your visit by tasting the many delicacies of Black Sea cuisine and local specialties, such as İskilip dolma (caramelized onion, rice and lamb), hingel mantı or the area's famed chickpeas. Perhaps, you'd also like to grab a hand-spun or woven product made from the local "kargıbezi" fabric as a fitting souvenir from the region. Copper utensils and leather products are also popular local items.

And if you'd like to see more remains from the Hittites – or any other ancient Anatolian civilization for that matter – you should start heading west until you reach Ankara to take a trip back in time at the Museum of Anatolian Civilizations.

Çorum is practically an open-air museum awaiting visitors, and it is surely worth a visit – after this pandemic is over, of course.