A strategic electoral upset in the making in Malaysia? 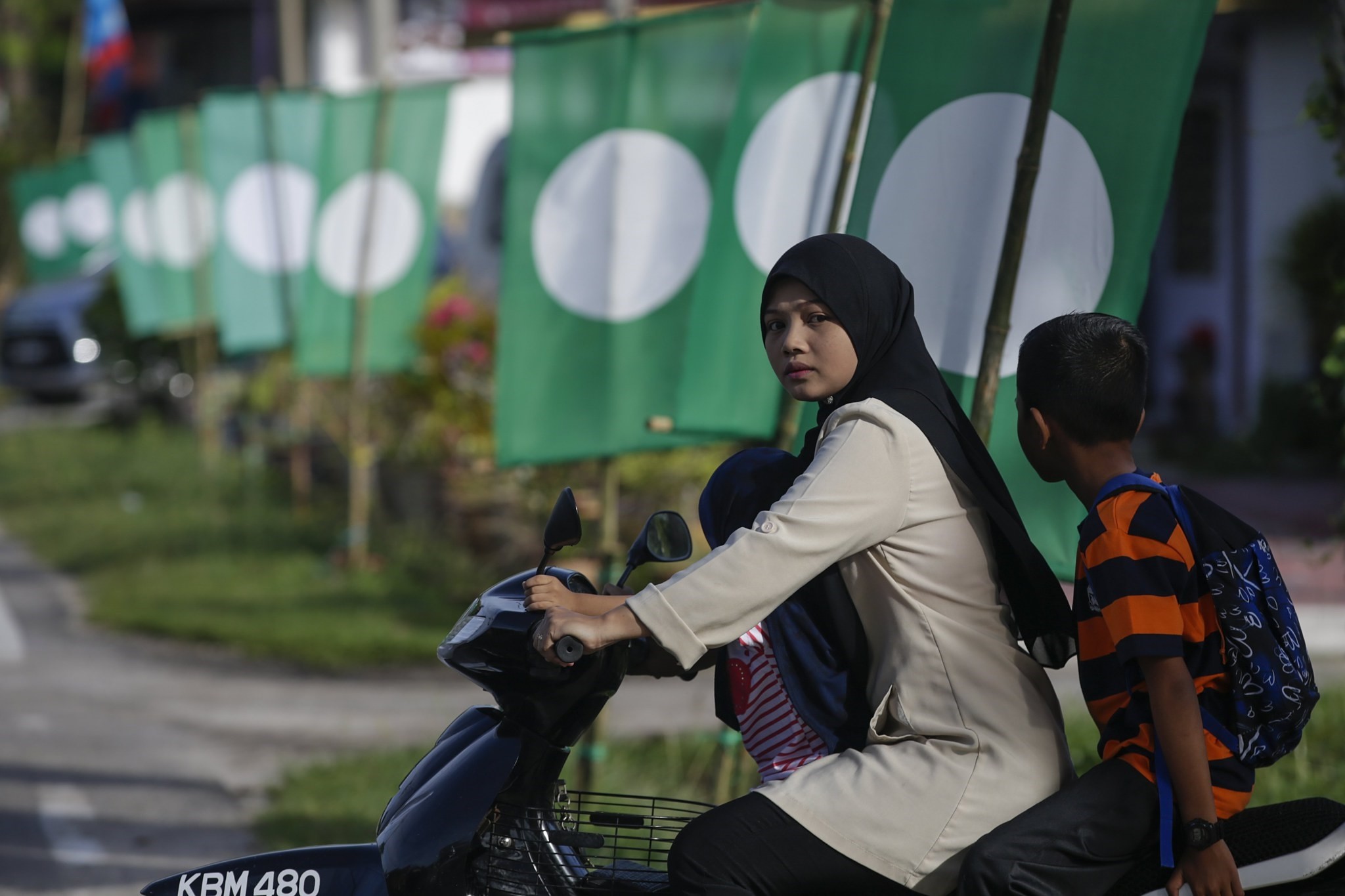 A mother and her son ride a motorcycle in front of Pan Malaysian Islamic Party (PAS) flags on the island of Langkawi, Malaysia, April 27.
by Mustaqim Abdullah May 07, 2018 12:00 am

While the Barisan National keeps losing the popular opinion, and in due course, the popular vote, the Alliance of Hope is in a commanding lead in several states and is inching towards victory at the federal level in Malaysia

The article wrote by Mushtak Parker, "Malaysian Elections: Weak Opposition Weak Coalition" published in Daily Sabah on May 1, paints Pakatan Harapan, otherwise known in English as "the Alliance of Hope," as a hopeless assemblage of parties that stood no chance of winning the election happening in Malaysia on May 9.

His exuberance over the likelihood that incumbent Barisan Nasional (BN) led by Najib Razak will coast to victory has caused him to ignore actual facts. So egregious are his omissions that he may have criminal liability in Malaysia under the Anti Fake News Law, which, ironically, was passed only to punish critics of the government. Firstly, the trend is in favor of the Alliance of Hope. Tracing its roots back to the first wave of Reformation in 1999 where it made substantial gains in the 2008 elections under the leadership of Anwar Ibrahim, the opposition obliterated the political status quo by denying the government its age old two-third majority in Parliament.

In 2013 it went further by winning the popular vote for the first time ever with 52 percent support. Had it not been for the gerrymandered districts, BN would have already tasted defeat.

Today the Alliance of Hope is in a commanding lead in several Malaysian states, and is inching towards victory at the Federal level. On popular votes, research agencies across the board are pointing to an opposition victory in excess of 52 percent.There are six key realignments taking place in the electorate which are being called tsunamis. Malays, Chinese, Indians, women, and voters living in Borneo, which is Sabah and Sarawak, are among the groups which are predicted to swing big to the opposition.

Had this been sheer exaggeration, the caretaker government of Prime Minister Najib Razak would have considered it just bluster and bravado.Yet since late March, he has initiated plans A through Z to frustrate and impede the opposition using the apparatus of the state. His tactics range from de-registering opposition parties the day before Parliament was dissolved to preventing candidates from entering the nomination centers.

That is not to mention the early April passing of the re-delineation of district boundaries, making one of the world's most gerrymandered electoral systems even worse.

Even if the six "tsunamis" do not come all at once, the former finance Minister of Malaysia Daim Zainuddin, known as the oracle of Malaysian politics who accurately predicted the results of the 2008 and 2013 general elections spot on, affirmed yesterday that the Alliance of Hope is in a position to win.

Other United Malays National Organization (UMNO) stalwarts are joining the campaign trail with Mahathir, signaling that the UMNO system is in effect broken and the psychological barrier preventing rank and file UMNO members from breaking ranks with the party is itself shattered. Not bad for a coalition that is barely a year old.

Parker describes the coalition as a senior-citizen's club of political has-beens out of touch with GenZ. However, if one looks at campaign rallies exceeding 50,000 people and engagements on social media, you would see that Malaysians from all age brackets have jumped on the bandwagon, if for nothing else than their absolute rejection of the status quo.

And, the turnout is a rainbow coalition of people of different ethnicities and background – a key feature that distinguishes the central thrust of the opposition's message – which points to a post-racial Malaysian political landscape.

In contrast, when Najib tried to hold an event in the heart of Kuala Lumpur on April 27, his Live Facebook feed visibly showed that barely 1,000 showed up.

Thus, the difference in scale and exponential is getting more glaring by the day, with the opposition able to win the hearts and minds of Malaysians, while the government is forced to dish out free blenders and a few hundred ringgit to fill the seats.

More importantly, this election has had several key supports from the sons of several former leaders of the Islamic party. Instead of remaining with PAS, the likes of Mujahid Rawa, Nik Omar, and Faiz Fadzil, all of whom are the sons of former Islamic stalwarts, have joined Amanah, which is the Islamic wing of the Alliance of Hope.

Their participation and membership have triggered talks of an "Islamic Tsunami," as up to 50 percent of the Muslim voters in Malaysia may decide to go with them, according to the research of University of Malaya.

No matter how one cuts and slices it, the Alliance of Hope is in an unenviable situation. What it has to accomplish – which it can – is a high voter turnout on May 9, ideally not less than 86 percent, which Parker conceded is both likely and a previous precedent.

The reconciliation of Anwar Ibrahim and Mahathir Mohamed represents the first step in the process of coming to terms with Malaysia's past. That Reformasi stalwarts have embraced Mahathir, who up until recently was considered a mortal enemy, reflects a mature grasp of the concept that democracy is about compromise and conviction – that ultimately there is a reform agenda that is inclusive, forgiving and pragmatic.

This allowed the parties in the opposition to reach an agreement on seat allocations that reflect an understanding of what it takes to win in multi-racial Malaysia. One party even gave up two seats for the greater good.

Barisan National appears to be on weaker footing. No one knows if they have a secret electoral pact with PAS, yet PAS has willingly taken up the cudgel of competing in 160 seats – six times more seats than they won in their best ever election in 1999. At 160, PAS is determined to be a spoiler on behalf of Barisan National.

Parker should ask himself: if Barisan National is so strong, as he claims it is, why does it have to enlist a radical Islamic party into a quasi-alliance to split the Malay votes three ways?

To be fair, Parker could no better answer that question than Malaysians themselves, clueless with the tactics and strategic thrust of PAS and Barisan National too. How can a government of right repute, and legitimacy, be formed on May 9, if the key strategy is to break up the Alliance of Hope by polarizing their votes first?

The truth of the matter is this. After close to nine years of waffling through economic transformation, which has not resulted in any trickle-down economic effects, Najib's political coalition has used up more than two-third of it's half-life, if not all of it.

If Barisan National is still determined to contest in the 14th general election with such high odds stacked against it, it is due to their very confidence in the electoral system that it has malapportioned and jerry-rigged to favor Barisan National, even when it keeps losing the popular opinion, and in due course, the popular votes.

Parker – a frequent contributor to the Malaysian New Straits Times, an English language mouthpiece for the Barisan Nasional – has every right to comment on Malaysian democracy. But when the evidence all points to the reverse, it makes no sense to declare the Alliance of Hope as practically needing a miracle to win.

The tulips of democracy are now just blooming in Malaysia. And why not? It is good for Malaysia and good for a world that has sadly seen democracy in retreat for over a decade.

If Malaysia is a genuine democracy, it stands to enhance its relationship with Ankara even further, as both countries would set a lovely example on how the Islamic and Arab world can walk out of their quagmire in the aftermath of the Arab Spring. Wouldn't that be just splendid?

* Mustaqim Abdullah, Ph.D., is the founder of Echo Strategic Insight, and associate fellow of edX.org