A coup? A terror attack? Turks can help Americans define the chaos at the Capitol 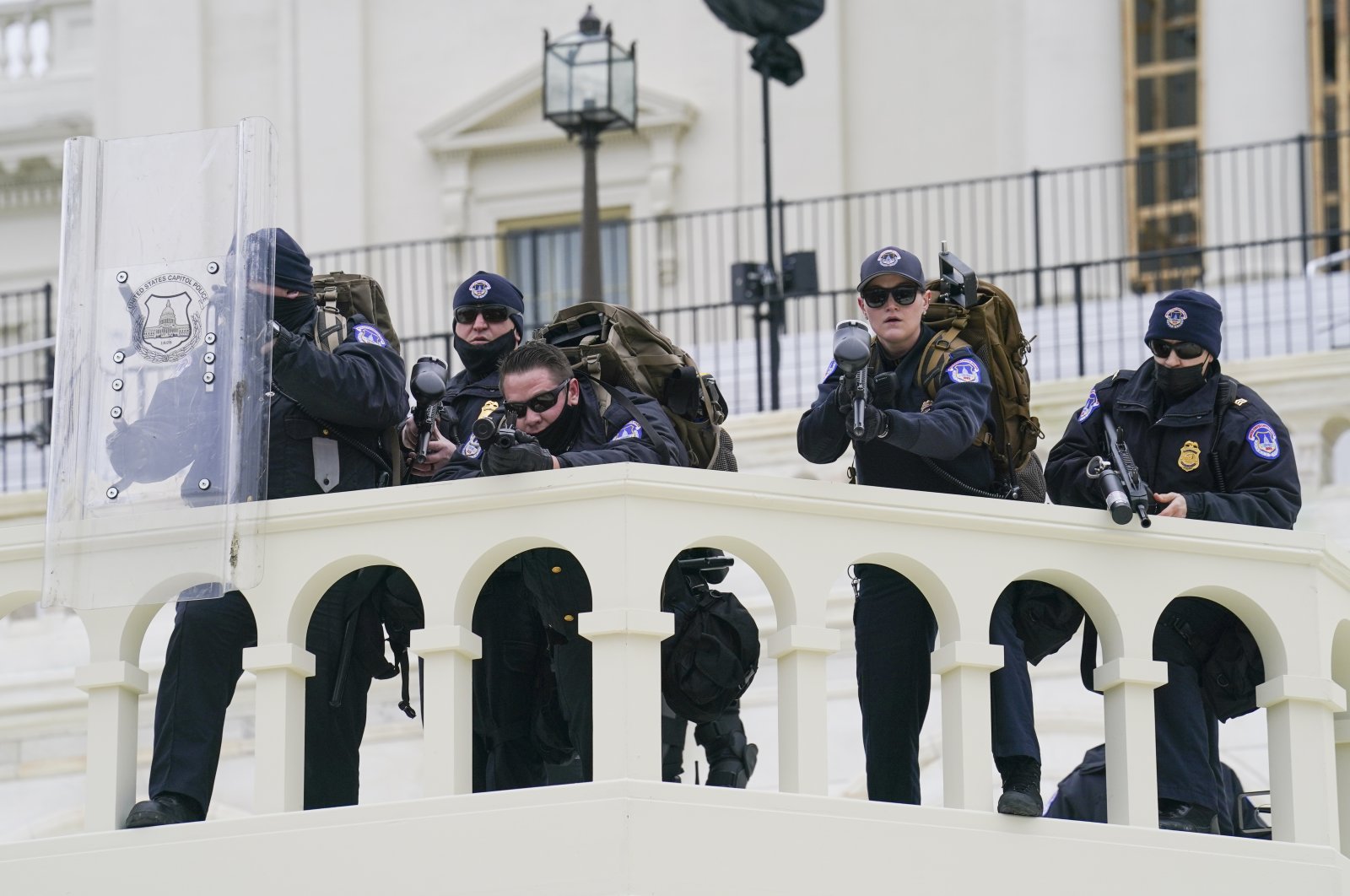 Apparently, federal investigations into what happened during the U.S. Capitol building riots on Jan. 6 will last for a while longer. The Federal Bureau of Investigation (FBI) has already made over 125 arrests with the help of more than 140,000 tips and through alleged participants photographing themselves and others during the disgraceful event and posting these photos on social media, reports said. The officials are also looking into how security officials were caught so off guard during the incident.

Although many law enforcement agencies say that no one anticipated an attack of this kind on the Capitol – despite the fact that there was enough evidence on the internet that should have alarmed them – some members of the Capitol police department have been suspended amid the investigations.

In addition to that, people are wondering whether some of them helped the rioters breach the building. In the meantime, it was revealed that at least 29 current or former members of the U.S. military or law enforcement were among the crowds that day.

The Democrats were quick to say that the incident was an act of domestic terrorism, while the rioters called themselves “patriots.” The woman who died after being shot in the Capitol was identified as an Air Force veteran, who became a celebrated martyr for many far-right groups. Some of the people in the crowd were allegedly U.S. soldiers or Marines who served in Iraq and Afghanistan.

While Washington has started to prepare for Jan. 20, the inauguration day of President-elect Joe Biden, thousands of National Guard troops have arrived in the capital of the U.S. to support law enforcement through the big day. Many photographs of National Guard members at the U.S. Capitol building went viral on the internet.

As the Democrats insist on the Senate impeachment trial of Donald Trump even after he leaves office, saying that the “most dangerous crime” must be punished, it looks like the new administration will continue their reprisals. In addition to that, the FBI is reportedly investigating whether foreign governments, organizations or individuals provided any support to rioters to plan and execute the Jan. 6 events.

The extreme security measures that are being taken in Washington, which have never been seen before, as well as the reaction of the nation in the wake of the incident, have been perplexedly watched by the rest of the world, and the rhetoric surrounding the event, mostly used by the Democrats, are raising questions: Was it really a coup? Was it a terror attack? Mob violence?

In Turkey, many people including me, are following the actions of the security apparatus of the U.S. and the reactions of the Democrats from a different perspective. As a country that survived an attempted coup four years ago, we know what a coup really looks like.

On July 15, 2016, 251 civilians were killed and more than 2,100 were injured during the planned coup attempt by the Gülenist Terror Group (FETÖ), members of which had already infiltrated into the Turkish army as well as many other bureaucratic institutions including the judiciary.

President Recep Tayyip Erdoğan was almost going to be assassinated by members of the terror group, whose leader has been living in Pennsylvania since 1999. The horrific attempt not only targeted the democratically elected government of Turkey but also the people who poured into the streets to stop the coup, who were later horrifically killed.

The Turkish Parliament, the almost sacred symbol of Turkish democracy and the people’s will, just like the Capitol Hill of the U.S., was bombed from the air.

Turkey expected some sympathy and solidarity from its allies, including the U.S., but instead, it faced criticism just because the state started to arrest the members of the terror organization. In fact, the Obama administration’s first reaction to the coup attempt was like a joke. While Turkish citizens were clashing against the putschists on the streets, then-U.S. Secretary of State John Kerry just called for “stability and peace and continuity within Turkey.”

When the course of events turned in favor of Turkish democracy and against the terrorists, then the White House finally released a statement saying “all parties in Turkey should support the democratically elected government of Turkey, show restraint and avoid any violence or bloodshed.” As FETÖ members were starting to be arrested, two days later Kerry warned Turkey “not to overreach its reprisals against the coup plotters.”

In the meantime, the then-head of the U.S. Central Command, Gen. Joseph Votel, said that some officers with whom the U.S. had relationships were imprisoned for their role in the coup attempt, adding that the “post-coup purge might affect Turkey-U.S. military cooperation,” further infuriating the Turkish people, who had already thought that the U.S. was involved or at least aware of the failed coup attempt.

It took 40 days for then-U.S. Vice President Joe Biden to pay a visit to NATO ally Turkey. During the press conference with then-Prime Minister of Turkey Binali Yıldırım, Biden condemned “the tragic events on July the 15th,” adding: “I remember at the time when he (Obama) and I heard the news, we weren’t sure whether it was real or whether it was some concoction made up on the internet and the web. I’m serious.”

This is not even half of it. Turkey has always been criticized by its Western allies, especially the U.S. during its fight against the outlawed PKK, which killed tens of thousands of people for 40 years. The PKK is designated as a foreign terrorist organization by the U.S.; however, when the terror attacks by the organization, which were emboldened with U.S. military support for its Syrian offshoot YPG allegedly to fight Daesh, resumed and increased day by day, Washington chose to overlook the terror and violence, “urging” Turkey to “respect the rule of law.”

It was almost like an insult to the civilians who were brutally killed by the PKK terrorists, the rights of whom became first for the Americans and the Europeans.

The former co-chair of the pro-PKK Peoples’ Democratic Party (HDP), Selahattin Demirtaş, is in jail since he called his supporters to take to the streets during the Kobani riots in 2014. A total of 46 people were killed on Oct. 6-7, 2014, due to the violence of the PKK. Some of them including children were tortured in the southeastern cities of Turkey following his call. However, Turkey’s Western allies led by the U.S. argue that Demirtaş is imprisoned just because he is an opponent of Erdoğan.

How can Trump be responsible for the Jan. 6 Capitol riot as he called on the people to walk to the Capitol while Demirtaş is innocent even though he called on his supporters to join the events that were staged by the PKK?

How can the U.S. Capitol rioters be “domestic terrorists” and FETÖ members who bombed the Turkish Parliament and killed hundreds are not in the eyes of the American Democrats? For many Turks, if this is not hypocrisy, then what is?

It is a good development for the U.S., a country that has not even seen the Ku Klux Klan as a terror group until now, to finally see the potential of the threat of white supremacist groups and far-right extremists. It is good for the West to see that radicals are not only among the “Islamists" but that there is a domestic terror risk for even the most democratic countries.

But the Americans should understand that another country's terrorists cannot be their “freedom fighters.” No need to mention that the U.S.' enormous support of the PKK’s Syrian wing YPG and providing shelter for FETÖ leaders and members are the main reasons for the problems in Turkey-U.S. relations.

On Friday, the FBI arrested a former U.S. Army soldier, Daniel Alan Baker, on charges of inciting violence ahead of planned demonstrations this weekend at the Florida state capitol. According to the reports, he is an Antifa supporter and was plotting an attack on Trump supporters on the inauguration day.

Most interestingly, he joined the YPG in Syria in 2017. The U.S. State Department said: “He claimed on social media that he was a trained sniper for the YPG, and he can be seen in a documentary film fighting Daesh and Turkish militants. The YPG is a sub-affiliate of the PKK, which is designated by the U.S. as a foreign terrorist organization.”

It is also good to see that the U.S. understands the extremists can also be leftists. And most importantly, the U.S. government admits that the YPG is a PKK sub-affiliate. I hope the domestic tension in the U.S. will end soon and the American policymakers will learn from the events they have gone through. Otherwise, the new administration will continue to make the same mistakes expecting different results.