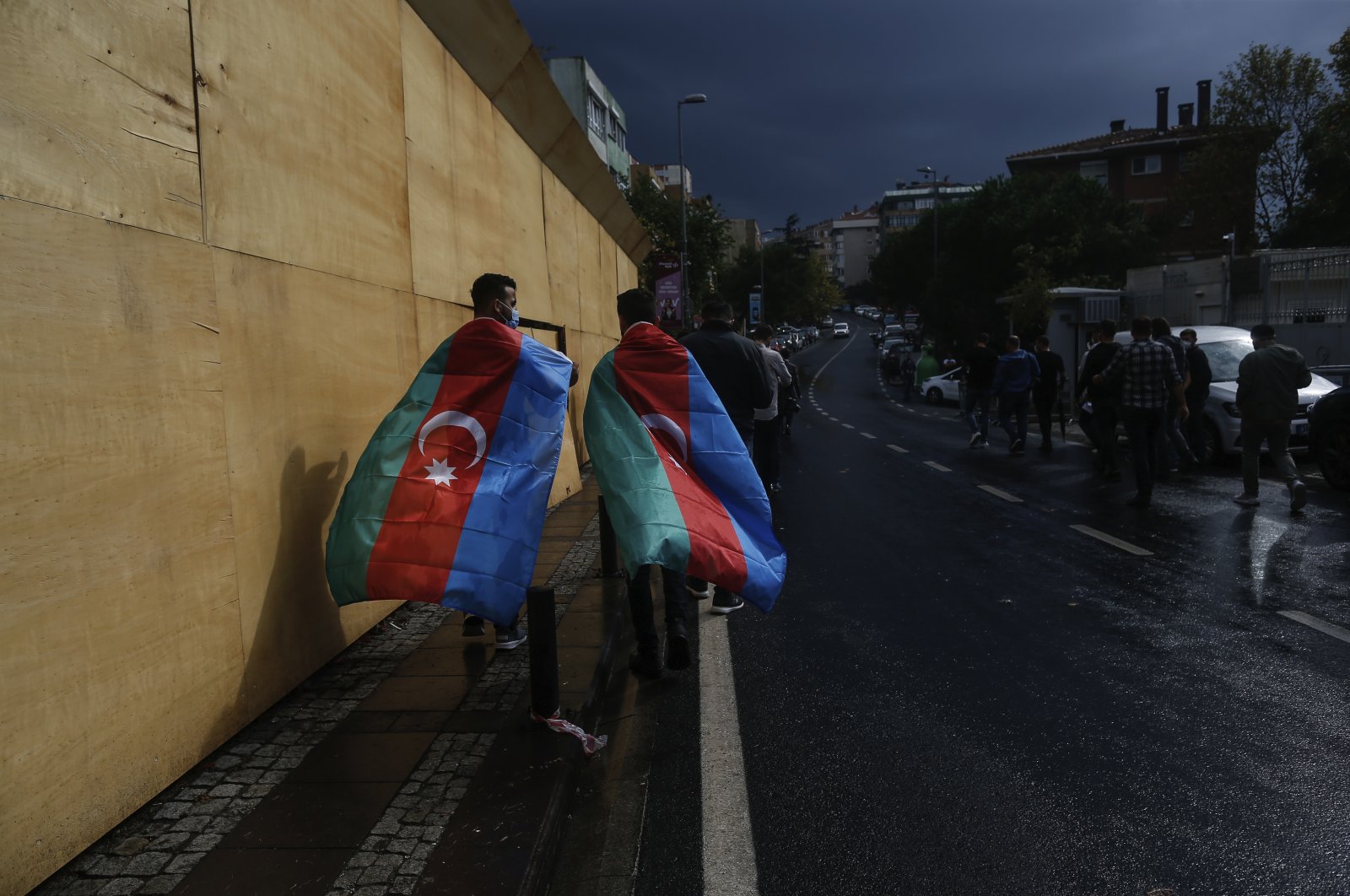 Since the beginning of the recent armed conflict between Azerbaijan and Armenia, Turkey has been increasingly criticized by some circles due to its support of Baku. Specifically, French President Emmanuel Macron attacked Ankara this week during his visit to Latvia.

"France is concerned by the warlike messages from Turkey in favor of Azerbaijan's reconquering Nagorno-Karabakh. And that we won't accept it," he said. His statement targeting Turkey was not surprising as Macron’s aggressive stance toward France’s NATO ally has become familiar in the last couple of months since the failure of France-backed putschist Gen. Khalifa Haftar in Libya against the country’s United Nations-recognized and Turkish-supported Government of National Accord (GNA) during the warlord’s offensive on the capital Tripoli.

France previously gave support to the YPG, the Syrian branch of the PKK, an outlawed organization designated as a terrorist group by the U.S. and the European Union, as well as Turkey. Turkey’s ground operations against the presence of the YPG/PKK in northern Syria infuriated Paris. Most recently, Macron provided support to Athens during the tension between Greece and Turkey in the Eastern Mediterranean – not only in words but also by sending warships and fighter jets to the region, further escalating the conflict between the two NATO allies. The agreement to resume exploratory talks between Ankara and Athens, which was reached last month after German Chancellor Angela Merkel’s efforts for dialogue, probably disappointed the French president. Obviously, he is eager to settle accounts with Turkey in the Caucasus now.

Macron is accusing Turkey of getting involved in the conflict in favor of Azerbaijan, while he declares Paris’ support for Armenia, which is another of his contradictions. As France is one of the co-chairs of the Minsk Group, founded 24 years ago by the Organization for Security and Co-operation in Europe (OSEC) to resolve the frozen conflict between Azerbaijan and Armenia, Macron should have spoken in a more constructive direction, but his statement is clearly not neutral.

Besides, forgetting that Nagorno-Karabakh is internationally recognized as belonging to Azerbaijan, he said that Azerbaijan is “reconquering” the region, which was actually invaded and occupied by Armenia. After supporting a terrorist organization in Syria, backing a war criminal in Libya and fueling the tension between two NATO allies in the Eastern Mediterranean, it looks like the ambitious French leader has once again picked the wrong side.

Apart from Macron’s aggressive stance as a political leader, some organizations such as Western think tanks are trying to turn Turkey into a target in this recent armed conflict. While they intentionally spread misinformation, claiming that Baku started the conflict while it was Armenia that attacked Azerbaijani soil last week, repeating its July assault on Azerbaijani territory, they also argue that Turkey has injected itself into the conflict by declaring its “complete support” for Azerbaijan.

Despite the fact that the Turkish Ministry of Defense declared that Turkish aircraft and unmanned aerial vehicles (UAVs) were not used against Armenia, false claims on official Armenian social media accounts, which cannot provide any evidence, are echoed by the circles in question. Turkey is one of the main arms suppliers of Azerbaijan, just like Russia and Israel, so Azerbaijan's armed forces, of course, are using Turkish-made UAVs and other military equipment.

But twisting and turning obvious facts is just black propaganda targeting Ankara. Using the international community's complete lack of information concerning the background of the relations between Turkey and Azerbaijan as leverage, attacking Ankara over its support of Baku is just a new chance to discredit Turkey.

Those attacks are also a threat to Azerbaijan, which implies that being close to Turkey means isolation in the international community. That is why it is necessary to underline why the Turkish state and Turkish people stand in solidarity with Azerbaijan.

Turkey-Azerbaijan relations are defined as “one nation, two states.” The slogan is not only a popular or fashionable motto, but it comes from the heart of the people of the two countries as they come from the same blood and the same genesis. “One nation” means that both societies share the same core. They see each other as more than friends; they are brothers and sisters.

Azerbaijani people call themselves Azerbaijani Turks, or simply Turks, not Azerbaijanis or Azeris, showing that they stick to their roots. The people of Turkey and Azerbaijan have never been under the rule of the same state throughout their history. They have their own histories, their own stories. However, both have always known that they belong to the same ancestors. In this context, it is normal for two states to have close ties.

The Batumi Treaty, signed on June 4, 1918, between the ADR and the Ottoman Empire, ensured that the new state could ask for military help from the empire when faced with a threat. Shortly after the signing of the treaty, the ADR actually needed help. The first government was formed in Ganja, now northwestern Azerbaijan, as Baku was then controlled by the Bolsheviks and Armenian militants.

An elite Ottoman force, namely the Caucasian Islamic Army, led by Nuri Pasha (Kıllıgil) was sent to Baku by the Ottoman Empire’s minister of war Enver Pasha in September 1918, during the final weeks of World War I. The Caucasian Islamic Army, formed by Turkish soldiers and Azerbaijani Turks, liberated Baku, where at least 1,100 of them sacrificed their lives side by side.

The ADR was toppled in 1920 by the Soviet Union, and Azerbaijan was able to found an independent state after the collapse of the Soviet Union in 1991. Then again, Turkey was quick to recognize Azerbaijan’s independence. Ever since then, the relations of the two countries have always been close.

In 2009, Ankara tried to hold talks with Armenia in line with its initiative to refresh its relations with all neighboring countries, despite the criticisms of Azerbaijan and the majority of Turkish society. Noting that there would be no normalization with Armenia before the Armenian occupation of Nagorno-Karabakh ended, Turkey believed that this move would help to solve the problems between Baku and Yerevan as well. However, both Armenia and the Armenian diaspora’s stance against Turkey have shown that they do not want peace.

Turkey continues to reiterate it is ready to open its archives to historians and scholars to learn the truth regarding Armenia’s genocide claims, but Armenia has never accepted that offer. Unfortunately, it is crystal clear that Armenia does not want to have peace with Azerbaijan. In addition to that, its aggressive policy toward Turkey and Azerbaijan is not only a political problem, it also reveals that Armenia has an ethnical grudge against Turks.