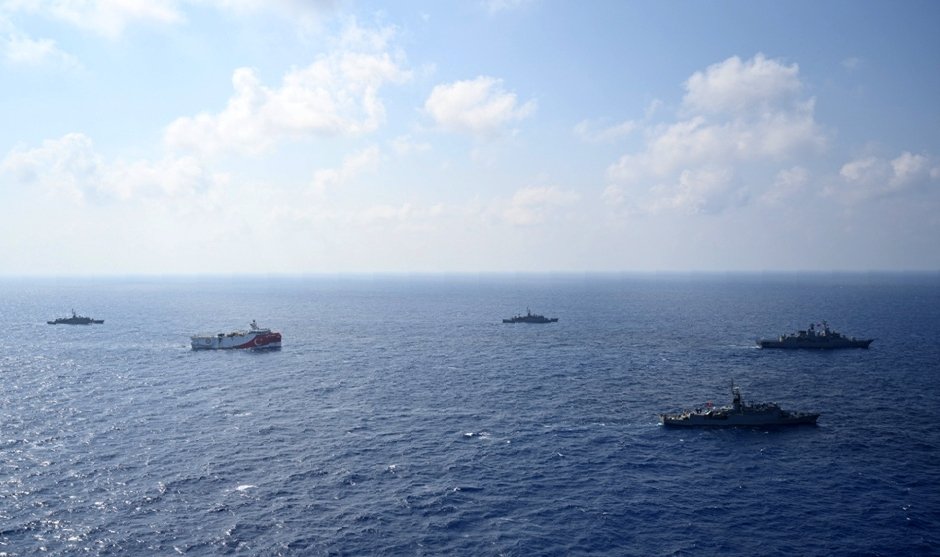 Turkey's research vessel Oruç Reis, in red and white, is surrounded by Turkish navy vessels as it was heading in the west of Antalya on the Mediterranean, Turkey, Aug 10, 2020. (AP Photo)
by Nagehan Alçı May 08, 2021 12:05 am
RECOMMENDED

Actually, there were some steps made prior to the visit. The two sides initially made contact through their intelligence chiefs and foreign ministers.

Turkey and Egypt have an agreement over maritime delimitation in the Eastern Mediterranean as well as on strengthening economic relations.

There is a global power struggle going on in the area, and Turkey is moving to block plans aimed at dismissing it from the Eastern Mediterranean waters.

The goal is to repair diplomatic and economic ties with Egypt, as the country remains Turkey’s biggest African trade partner with a trade value of $4.86 billion (TL 40 billion) last year.

Turkey and Egypt backed opposite sides in the Libyan conflict. A 2019 Turkish deal with Libyan officials, aimed at boosting Turkish maritime rights and influence in the Eastern Mediterranean, angered regional countries including Egypt. In response, the country signed a separate deal to delineate its maritime boundaries.

However, there has been a cease-fire in Libya and official government forces backed by Turkey and the United Nations have formed an interim government. This also paved the way for the normalization of Turkey-Egypt relations.

The dialogue started last year between the intelligence services of the two countries.

Egypt gave a green light to the exclusive economic zone (EEZ) demarcated by Turkey which was welcomed by Ankara.

Lastly, Foreign Minister Mevlüt Çavuşoğlu announced that Turkey might negotiate a maritime demarcation agreement with Egypt in the Eastern Mediterranean which opened the way for the recent developments.

This does not mean that Turkey has changed its position toward the Muslim Brotherhood. The coup in Egypt was brutal, anti-democratic and unjust and Turkey stood firmly by the democratically elected government.

However, it never aimed to change the regime in Egypt.

The reaction showed Turkey's willingness to stand with democratically elected governments. And it still defends those same values.

So, the normalization of relations should not be seen as a step back by Ankara. This move has been taken for the benefit of the country but the Justice and Development Party (AK Party) government will continue to defend the rights of freely elected governments elsewhere in the world.