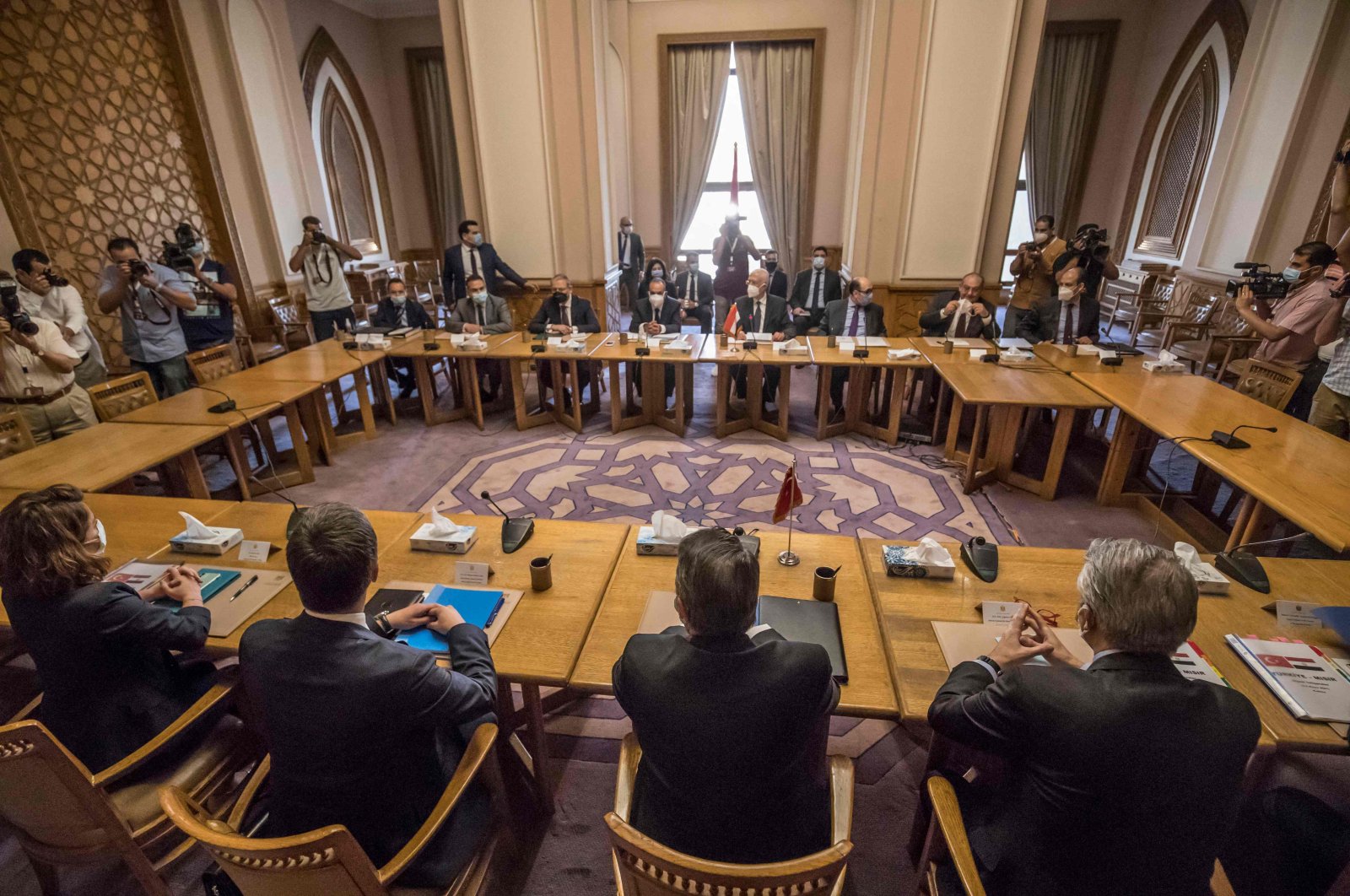 Closer ties between Turkey and Egypt will make a significant contribution to regional peace and development, senior Turkish officials have said underlining the positive atmosphere in recent "frank and in-depth" diplomatic talks to mend ties broken over a decade.

Responding to questions from reporters in Istanbul following Friday prayers, President Recep Tayyip Erdoğan said that Turkey currently is trying to regain and resume its historic unison with the people of Egypt. "It would be sad to see them in solidarity with Greece," Erdoğan said, referring to Athens and Cairo's joint hydrocarbon efforts in Eastern Mediterranean.

In an interview broadcast live by NTV, Oktay said Ankara's door was open to improving relations with regional countries on the basis of mutual respect of sovereignty and territorial integrity, especially Egypt, with whom bilateral ties have recently been advancing.

"We have 500-year-old ties, common experiences...commercial ties, a partnership in the political sense, so the connection between the peoples of Egypt and Turkey has never been broken off," he said.

"The political relations might have ups and downs from time to time," he said but added that the joint actions by the two sides would certainly serve in their interests.

According to Oktay, the lines drawn by Egypt in its pursuit of new natural gas and oil reserves in the Mediterranean region respect Turkey's exclusive economic zone (EEZ) territory established through a maritime jurisdiction deal reached with Libya.

In addition, Turkey and Egypt never cut relations completely and had connections through certain other channels, including intelligence and diplomacy, he said, adding that now contact is maintained through deputy foreign ministers and that a full normalization would benefit both sides.

Following two-day exploratory talks between Turkey and Egypt, the Turkish foreign minister on Thursday noted the "positive atmosphere" in Cairo.

"Discussions will continue on the steps that can be taken to normalize relations in the upcoming period," Foreign Minister Mevlüt Çavuşoğlu told public broadcaster TRT Haber.

On a question regarding the two-day meetings between Turkish Deputy Foreign Minister Sedat Önal and his Egyptian counterpart Hamdi Sanad Loza in Cairo, Çavuşoğlu had said that a Turkish delegation would visit Cairo upon Egypt's invitation.

"As emphasized in the joint statement, the meetings were held in a positive atmosphere. Our friends discussed bilateral relations and what could be done about it," he said.

Regional issues concerning both countries were also addressed during the meeting, Çavuşoğlu said, adding that the issues of Libya, Syria, Iraq and the Eastern Mediterranean are important for all countries, including Egypt.

"We always say that Egypt will also profit from cooperation over here. When the relations improve to that level, we will discuss them as well for sure," he added.

The Turkish top diplomat noted that he had been in contact with his Egyptian counterpart Sameh Shoukry for various reasons in the past, including meetings of the Organization of Islamic Cooperation (OIC) and the Syrian Support Group.

He said Shoukry had called him for Ramadan greetings and that Çavuşoğlu himself called the Egyptian foreign minister after a ship accident.

Exploratory talks between Turkey and Egypt that ended on Thursday were "frank and in-depth," according to a joint press release by the two sides.

"The discussions were frank and in-depth. They addressed bilateral issues as well as a number of regional issues, in particular the situation in Libya, Syria, Iraq, and the need to achieve peace and security in the Eastern Mediterranean region," said the statement at the end of two days of deliberations in Egypt's capital Cairo.

Turkey and Egypt will evaluate the outcome of this round of talks and agree on the next steps, said the release, which was also published by the Turkish Foreign Ministry as a statement.

Earlier, it had been agreed that existing contact first drawn between the two sides' intelligence agencies would continue on the foreign ministry level.

Earlier this year, Turkey said it had resumed diplomatic contact with Egypt and wanted to improve cooperation after years of tensions that began with the disruption of relations in 2013. On April 15, Çavuşoğlu announced in a live broadcast that the two countries had agreed that the channel first opened between Turkish and Egyptian intelligence would continue through the foreign ministries. Çavuşoğlu said Egypt had invited the Turkish side for the visit in early May, which is to be held at the deputy foreign minister level. After an inter-delegation meeting, Çavuşoğlu expressed his willingness to meet with his Egyptian counterpart as well. The top diplomat also recently announced that the countries have discussed appointing envoys.