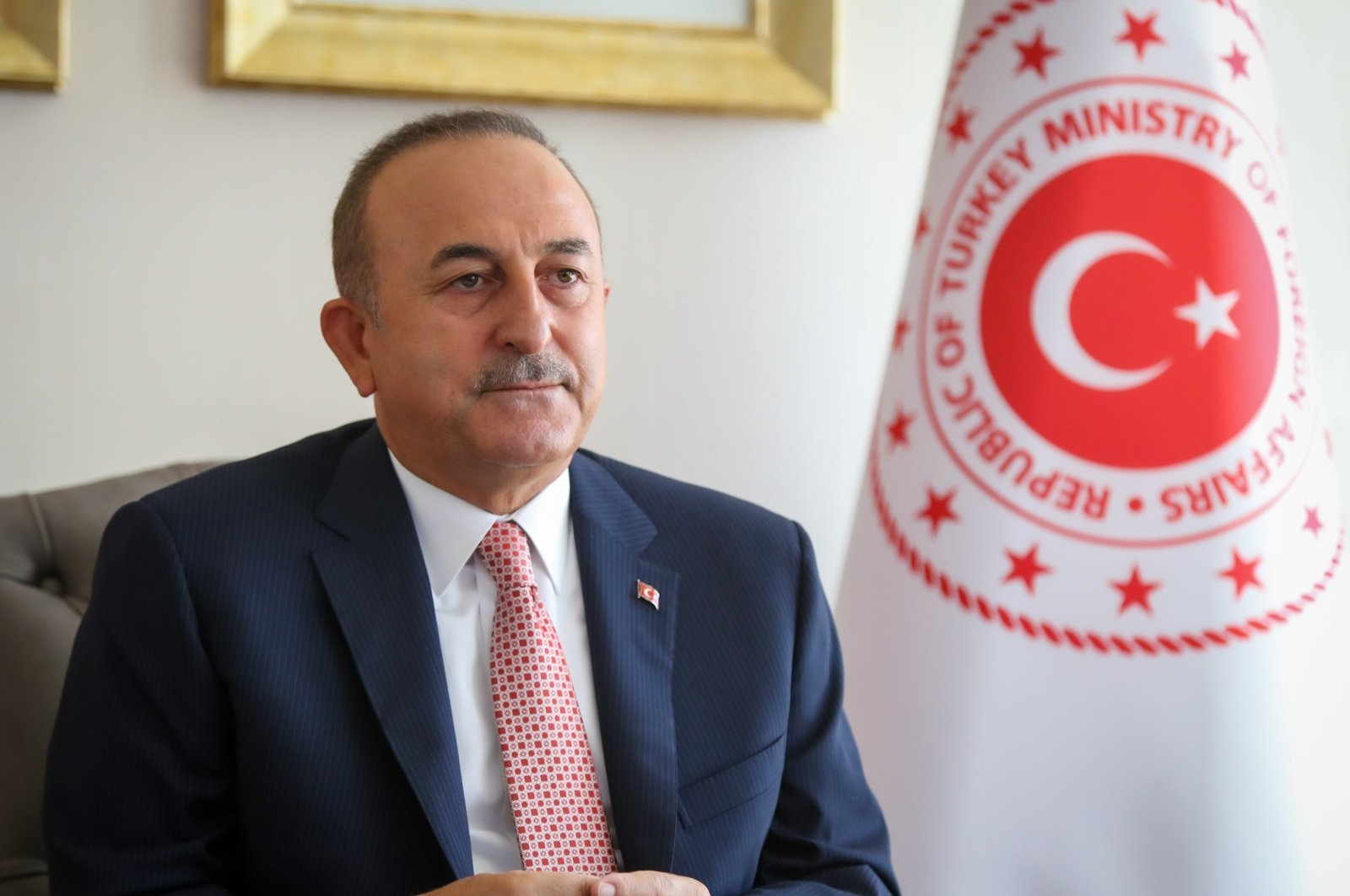 Turkey and Egypt will soon discuss the appointment of ambassadors and how to bring relations to a better point in the future, Foreign Minister Mevlüt Çavuşoğlu said Tuesday, as the two countries seek to fix years of broken ties, strained after the military takeover in the Arab country.

“Egypt has invited us at the level of deputy foreign ministers. Later on, we will sit down to discuss appointing ambassadors with Mr. Shoukry,” Çavuşoğlu said, referring to his Egyptian counterpart Sameh Shoukry.

Çavuşoğlu also said that Turkish diplomats will visit Egypt for official talks in May.

Regarding the strained relations between the two countries, Çavuşoğlu said that the tensions were due to the coup that overthrew Egpyt’s first democratically-elected President Mohammed Morsi.

“We have always been against the coup in Egypt. This was not because the Muslim Brotherhood was targeted. Should (Abdel-Fattah) el-Sissi have been overthrown with a coup, we would have sided with him too,” he concluded, reiterating that Turkey is against anti-democratic coups on principle.

Çavuşoğlu and his Egyptian counterpart Sameh Shoukry spoke by phone Saturday, their first direct contact since a push by Ankara to improve strained ties between the regional powerhouses.

A Turkish delegation led by Deputy Foreign Minister Faruk Kaymakçı will go to Egypt in early May, Çavuşoğlu told a live broadcast on NTV, as he highlighted the significance of Egypt in the region.

Last month, Turkey said it had resumed diplomatic contact with Egypt and wanted to improve cooperation after years of tensions that began with the disruption of relations in 2013.

Problems between Turkey and Greece cannot be solved in a single meeting, Çavuşoğlu said, as he highlighted the importance of properly focusing on difficult-to-solve issues.

Çavuşoğlu noted that visiting Greek Foreign Minister Nikos Dendias did not act honestly during the joint news conference last week, even though their meeting took place in a positive atmosphere.

Referring to the French seismic exploration vessel’s attempt to enter Turkish territorial waters accompanied by a Greek frigate as an “ill-intentioned initiative,” Çavuşoğlu said Turkey would have positively responded to their request if they properly sought the country’s authorization to carry out scientific exploration in the country’s continental shelf.

“We are not closed to such activities, but we only want others to respect our continental shelf,” Çavuşoğlu told Habertürk.

The foreign minister continued by saying that President Recep Tayyip Erdoğan and Greek Prime Minister Kyriakos Mitsotakis will come together to discuss bilateral relations, but the two sides have not yet decided on whether the meeting would be a strategic meeting or a high-level meeting.

Saying that it is possible to create trilateral and quadrilateral mechanisms in the Eastern Mediterranean and other regions, Çavuşoğlu said Turkey supports such initiatives as long as they do not target a specific bloc or a country. He continued by saying that Greece’s bilateral and trilateral agreements in the Eastern Mediterranean directly ignore Turkey and the Turkish Republic of Northern Cyprus’ (TRNC) rights.

Last Thursday, Dendias came to Turkey to hold meetings with Çavuşoğlu and Erdoğan. The visit was the first between the two nations after tensions rose high in 2020 over maritime boundaries and energy exploration rights in the Eastern Mediterranean, leading to a military buildup that featured warships from the two countries facing off.

Yet, recently, the two NATO allies have adopted a more conciliatory tone and have been seeking dialogue.

Turkey, which has the longest continental coastline in the Eastern Mediterranean, has rejected maritime boundary claims made by European Union members Greece and the Greek Cypriot administration, stressing that these excessive claims violate the sovereign rights of both Turkey and the TRNC.

Turkey also announced Tuesday that it is postponing the much-anticipated Afghan peace conference in Istanbul until the end of the Muslim holy month of Ramadan.

"We thought that it would be beneficial to postpone it ... We consulted Qatar, the U.S. and the United Nations and decided to hold it after Ramadan and Eid festivities," Çavuşoğlu said, adding there is "no need to hurry" after the recent decision by the U.S. to withdraw its troops.

The Eid al-Fitr holiday is due to follow Ramadan, which ends this year in mid-May.

The international conference, deemed essential for the war-torn country's future amid the withdrawal of foreign troops and escalating violence, was scheduled to be held from April 24 until May 4 in the Turkish metropolis.

"The conference would be meaningless without the Taliban joining. At the moment, we decided to postpone it since there is no clarity about the formation of the delegations and participation ... The aim is not to initiate alternative talks to Doha but to contribute to the process. Hosting the meeting together in Istanbul will be Turkey, Qatar and the U.N.," he said.

Çavuşoğlu underlined that Turkey made efforts to conduct the meeting before May 1 as U.S. forces were initially supposed to be completely withdrawn from Afghanistan by that day.

Last week, U.S. President Joe Biden announced that the withdrawal of all its forces would begin on May 1 in line with an agreement President Donald Trump's administration made with the Taliban, but some U.S. troops will remain to protect American diplomats.

Biden said American diplomatic and humanitarian efforts would continue in Afghanistan and that the U.S. would support peace efforts between the Afghan government and the Taliban.

"It is time to end America's longest war. It is time for American troops to come home," he said in a televised address on April 14.

"Negotiations continue on a decision in NATO. As part of this decision, we are trying to outline how we can support Afghanistan as NATO allies after the Resolute Support Mission is over," he said.

In his announcement of the withdrawal plan from Afghanistan, Biden said Washington would ask regional countries to "do more" to support Afghanistan, especially Pakistan, as well as Russia, China, India and Turkey.

"They all have a significant stake in the stable future for Afghanistan," he said, adding that over the next few months, Washington will also determine what a continued U.S. diplomatic presence in Afghanistan will look like, including how to ensure the security of the diplomats.

In line with Biden's announcement, all American troops will depart from Afghanistan by Sept. 11, the 20th anniversary of terrorist attacks in the U.S.

Noting that the Taliban and the state should agree on a permanent cease-fire and determine a political road map to avoid a new mission in the country, Çavuşoğlu recalled that intra-Afghan negotiations in Doha were initiated for that purpose and thanked Qatar for its contributions.

The intra-Afghan talks began after a February 2020 agreement between the Taliban and the U.S., which set a timeline for the withdrawal of foreign troops from Afghanistan in exchange for security guarantees.

Kabul has insisted on a permanent cease-fire, a demand so far rejected by the insurgents.

The two sides have been engaged in the second round of talks in the Gulf city since Jan. 10.

Çavuşoğlu also emphasized that Erdoğan will open the conference, which will be attended by 21 countries, three international organizations and the two parties from Afghanistan.

Speaking on the Bashar Assad regime's planned presidential election, Çavuşoğlu said the election "conducted on its own" would not be legitimate and nobody would recognize it.

Pointing out that the regime does not want a political solution, he said that Assad should realize that there will be no military solution and that he should attach importance to political outcomes.

He also highlighted that only an election after the political process would be legitimate and underlined the need to make legal arrangements and regulate the records in the country.

"Supporting an illegitimate election contradicts our principles," he added.

According to U.N. estimates, hundreds of thousands of people have been killed and more than 10 million displaced in Syria's civil war.