Concession to Egypt, confrontation with Turkey 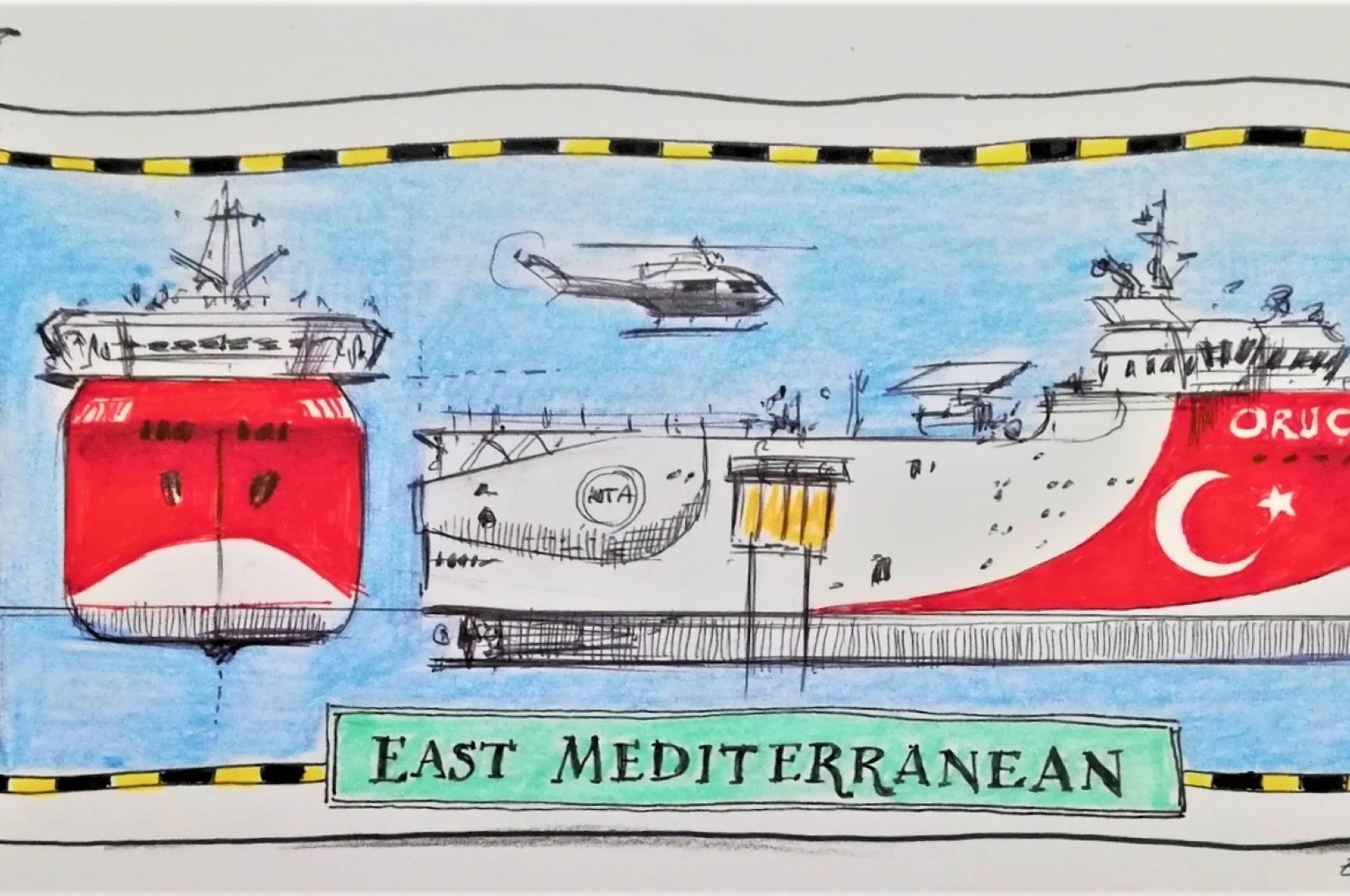 "Our MTA Oruç Reis seismic research vessel reached the operation area after departing from Antalya, for its new mission in the Mediterranean. Around 83 million Turkish people support you, Oruç Reis," Energy and Natural Resources Minister Fatih Dönmez wrote on Twitter.

Oruç Reis, which is accompanied by two logistics vessels, Cengiz Han and Ataman, has been escorted by Turkish navy units. Greece issued a counter Navtex against Turkey but there has been no massive mobilization of the Greek navy so far.

Turkey’s new seismic research activity was first announced on Aug. 6 – the same day Greece and Egypt declared that they signed a maritime delimitation agreement in the Eastern Mediterranean. Turkish Foreign Ministry said that the so-called agreement is null and void as a maritime boundary between Greece and Egypt. "The supposedly-delimited area lies within the Turkish continental shelf as declared to the U.N.," the ministry said.

The latest developments show that the tension in the Eastern Mediterranean will not ease and escalation will continue. In late July, Ankara announced that Oruç Reis was to start drilling, however, the decision was put on hold at the request of German Chancellor Angela Merkel. The goal was to give a chance to diplomacy and resume the talks between the two NATO allies and neighbors and to find a solution for the revenue sharing of the hydrocarbon reserves in the East Mediterranean.

President Recep Tayyip Erdoğan said on Aug. 7, "Merkel asked me to stop drilling. We said, 'If you trust Greece, we will stop working for a few weeks, but we do not trust them.'"

"They did not keep their promises," Erdoğan added.

Presidential Spokesperson İbrahim Kalın said over the weekend that the controversial Greco-Egyptian deal was signed a day before Ankara and Athens were supposed to jointly announce the resumption of talks for a solution regarding the problems between the two countries.

Before that, Ankara repeatedly said they were ready to discuss all issues; the Aegean, continental shelf, islands, airspace, research and screening efforts, and the Eastern Mediterranean along with other bilateral matters with Greece without any precondition. Berlin on Monday called once again for direct talks between Greece and Turkey to de-escalate tension sparked by Greece’s controversial deal with Egypt. However, Athens' latest move reveals that Greece will continue its "maximalist claims."

On the other hand, Ankara says that the so-called maritime delimitation agreement between Greece and Egypt is, in fact, endorsing Turkey’s thesis that the islands do not have sovereign continental shelves. According to Turkey, Greece conceded Egypt. Foreign Minister Mevlüt Çavuşoğlu said, "It looks like that concession was made over the sovereign rights of the islands, including Crete. It has been raised as a subject of criticism by the former Greek foreign ministers as well. Essentially, this is in support of our thesis."

Greece-Egypt deal does not include Kastellorizo (Megisti-Meis) and part of the coast of Rhodes. According to reports, Egypt did resist Greek demands as it tries to avoid a confrontation with Turkey.

Turkey argues that the notion of "continental shelf," by definition, means that distances should be measured from the continental mainland, claiming that the Aegean seabed is geographically a natural prolongation of the Anatolian landmass. When the two states' maritime claims overlap, the division is made by the median line. This means that Turkey is entitled to economic zones up to the median line of the Aegean, except for the territorial waters around the Greek islands in its eastern half, which would remain as Greek exclaves.

Turkey puts Greece's Kastellorizo island just 2 kilometers (1.2 miles) off the Turkish coast but around 600 kilometers to the Greek mainland as an example of this. According to Turkey’s equity-based viewpoint, Kastellorizo should not have an Exclusive Economic Zone (EEZ) since it is a very small island right across from the Turkish mainland. It argues that Kastellorizo, as a tiny island, cannot claim maritime jurisdiction that is 4,000 times larger than its landmass since an EEZ has to be based on the relative lengths of adjacent coastlines.

Greece, on the other hand, claims that all islands must be taken into account on an equal basis as a mainland. It looks like Greece gave up its claims and had to make concessions.

Minister Çavuşoğlu did also recall a maritime delimitation agreement Greece signed with Italy very recently which did not start the former’s continental shelf from its islands in the Ionian Sea. "These are two agreements that endorse our thesis," Çavuşoğlu stressed. So why can Greece abandon its long-standing claims when it comes to Egypt and Italy but ignores Turkey’s rights?

Egypt, on the other hand, surrendered an area of around 10,000 kilometers squared with Greece deal in addition to its loss of an area of 11,500 kilometers squared with the so-called agreement it signed with the Greek Cypriot administration in 2003. This is once again a loss for the Egyptian people; however, it looks like Cairo doesn’t care about it while it also does not hesitate to usurp the rights of Libya. After the announcement of the Greece-Egypt deal, Libyan U.N.-backed Government of National Accord (GNA) said it would not allow any party to violate its maritime rights.

The natural gas exploration activities that took place in the East Mediterranean in the 2000s, has created new crises and opportunities. A report, published by US Geological Survey (USGS) in 2010, indicates that there is an estimated 3.45 trillion cubic meters of natural gas and 1.7 billion barrels of oil in the Levant Basin, which is a region between Cyprus, Lebanon, Syria and Israel. It means that one of the largest natural gas deposits in the world is in the Eastern Mediterranean.

Moreover, there are around 8 billion barrels of oil reserves around the island of Cyprus. Besides, it is stated that there is a total of 3.5 trillion cubic meters of natural gas in the south and southeast area of Crete, which is called the Herodotus Basin. Considering that possible reserves will be discovered, the importance of the region in terms of energy is increasing.

The Eastern Mediterranean Basin often referred to as the cradle of civilization, has witnessed severe confrontations between numerous political powers throughout the course of its history. And today, this continues with vital disputes continuing to disconcert regional players as well as global powers pursuing their own interests in the region.

Currently, some of the most complicated and heated disputes are the overlapping claims on the maritime territories in the Eastern Mediterranean by several coastal states. In particular, the contrasting claims of Turkey, Greece, the Turkish Republic of Northern Cyprus (TRNC) and the Greek Cypriot administration of Southern Cyprus have built toward a major escalation in the last couple of years.

Turkey says that the countries of the region should cooperate in the delimitation of maritime zones and for the extraction and marketing of oil and natural gas resources. However, the one-sided activities of several states, especially Greece and the Greek Cypriot administration, in line with their own interests as well as their bilateral agreements with some regional states have increased since the beginning of the 2000s. After Greece, the Greek Cypriot administration, Israel and Egpyt launched EastMed Gas Forum, an attempt turned into a goal in order to exclude and isolate Turkey, which has one of the longest shores in the Eastern Mediterranean.

That is why Turkey reached a mutually beneficial deal with Libya’s GNA and signed a Memorandum of Understanding (MoU) on the Delimitation of Maritime Jurisdiction Areas on Nov. 27, 2019, to secure both the countries’ rights in the region, demarcate maritime zones in the Eastern Mediterranean on an area between Turkey and Libya and prevent any fait accompli by other regional states. This was Turkey’s second deal in the Eastern Mediterranean following a continental shelf delimitation agreement with the TRNC on Sept. 21, 2011.

This move of Turkey and the GNA came before Greece's attempt to sign a deal with Egypt. After this, Greece will probably try to make a similar agreement with the Greek Cypriot administration which would further escalate tension.

Ankara continues to say it is ready to dissolve differences in the Eastern Mediterranean and invites the coastal states to the table to give room for diplomacy. However, it will not stop protecting its rights and interests if its calls are ignored.