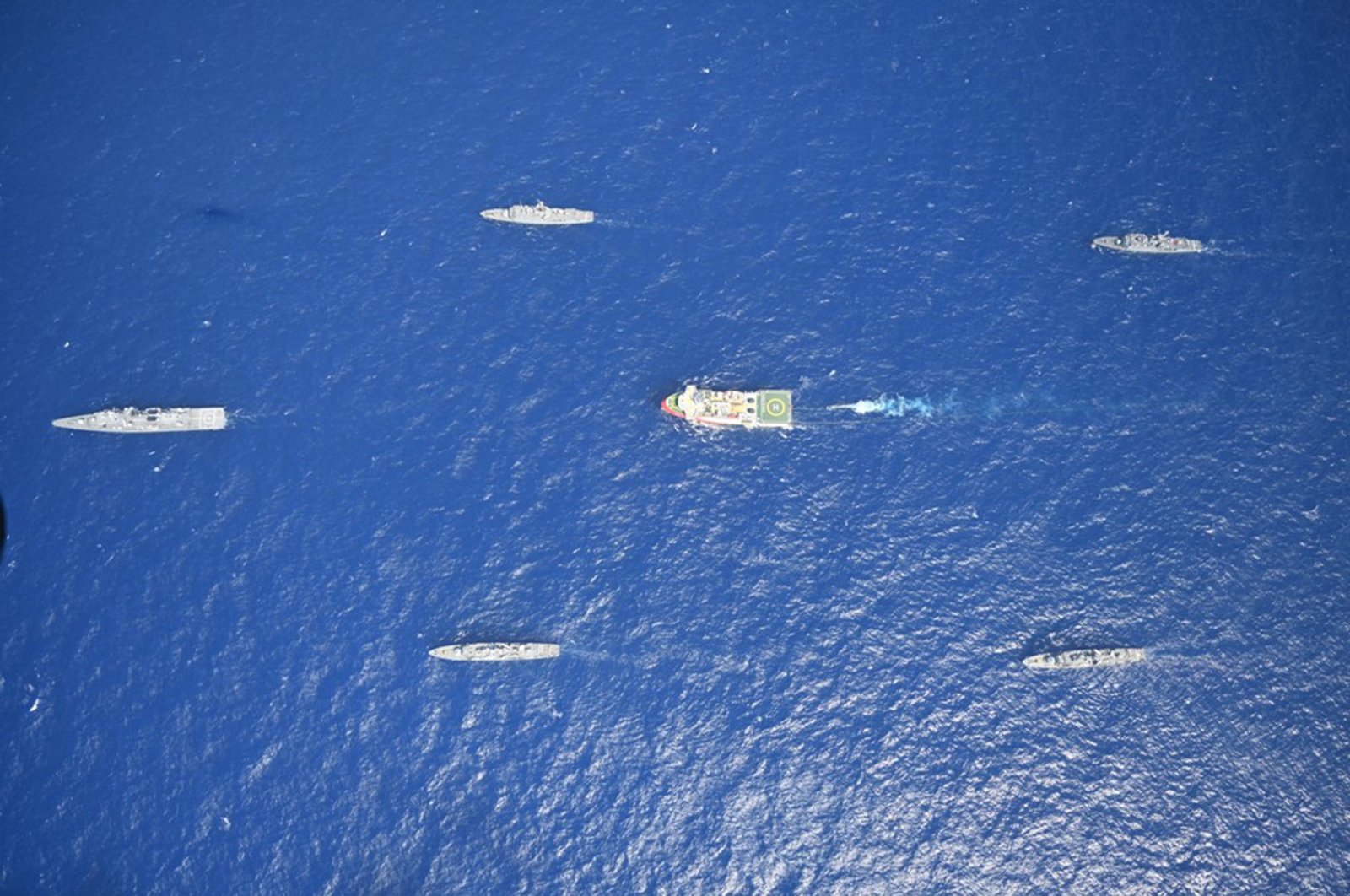 Turkey's research vessel Oruç Reis, in red and white, is surrounded by Turkish naval vessels as it cruises near Antalya province on the Mediterranean, Turkey, Aug. 10, 2020. (AP Photo)
by Yahya Bostan Jan 29, 2021 12:05 am

Exploratory talks between Ankara and Athens have yet to yield concrete results, but they serve as a great step toward diplomacy

Earlier this week, Turkey and Greece resumed exploratory talks after a long break. The two countries engage in dialogue to address their disagreements and resolve problems through diplomacy. Turkish and Greek officials met 60 times between 2002 and 2016, but there had been no contact since their last meeting. Monday’s meeting, in other words, marked a return to dialogue after five years.

Turkey and Greece are back at the negotiating table for two main reasons: The European Union became involved as tensions in the Aegean Sea spilled over to the Eastern Mediterranean. Secondly, Turkey’s actions in Libya left Greece helpless.

Let me recap. Greece seeks to maximize its maritime jurisdiction in the Mediterranean by claiming that its islands also have exclusive economic zones (EEZs). That policy would have entailed the containment of Turkey, which happens to have the longest Mediterranean coastline, within a small portion of the sea. Ankara responded to that move by signing an agreement with Libya regarding the delimitation of maritime jurisdictions, thereby undermining Athens’ maximalist demands.

Greece, together with France, proceeded to support putschist Gen. Khalifa Haftar, who attempted to overthrow Libya’s U.N.-recognized Government of National Accord (GNA) and pinned their hopes on a coup d’etat.

In response to those steps, Turkey deployed troops to Libya and offered military support to the country’s legitimate government in Tripoli. In the end, it became clear that Haftar had failed, leaving Athens no option but to negotiate with Ankara.

For the record, the European Union stepped in around the same time, having waited for the dust to settle in the Libyan theater in order to encourage diplomatic talks between Turkey and Greece. Had Haftar successfully toppled the Libyan government, Brussels would probably not call for diplomacy at all. Such a course of events would have also strengthened Athens’ hand.

Now back to this week’s meeting. Official delegations from Turkey and Greece met at the Presidency’s office located at Istanbul’s Dolmabahçe Palace. Officials from the Ministry of Foreign Affairs were expected to attend the talks, but the Turkish delegation also included Ibrahim Kalın, the president’s spokesperson, in order to highlight the importance Ankara attaches to negotiations.

He echoed the same sentiment in his statement: “All problems, including the Aegean question, can be solved and we are fully committed (to a solution). Peace and stability in the region serve everyone’s interests.”

Ahead of the meeting, the Greek side stressed that they wanted to talk about the delimitation of maritime boundaries exclusively. They reportedly shunned the Turkish offer to discuss all issues related to the Aegean Sea and the Eastern Mediterranean.

The Turkish side intends to discuss a long list of disputes, including Greece’s remilitarization of the Aegean islands in violation of the 1923 Lausanne Treaty. Turkey also wants to clarify the legal status of certain islands in the Aegean that are not subject to any treaties.

At the same time, Athens wants to increase its airspace and its territorial waters from 6 to 12 nautical miles. That step would severely and unreasonably restrict Turkey’s access to the Aegean Sea and is therefore viewed as a casus belli by Ankara.

Last but not least, Turkey wants to clearly establish where each country’s search and rescue teams can operate in order to act more quickly in the case of naval accidents – which Greece refuses.

According to sources, however, Turkish and Greek officials exchanged views on all those issues. The meeting, they added, was positive and constructive. The location of the meeting, coupled with the presidential spokesperson’s participation, also appears to have left a positive impression on the Greeks.

Will the exploratory talks lead anywhere though? In truth, exploratory meetings are intended to keep diplomatic channels open, as opposed to solve pressing problems. At least that’s what they mean in the real world. Therefore, there is no reason to expect the exploratory talks to yield huge results that successfully address all disagreements between Turkey and Greece.

At the same time, it is no secret that Athens has generally been unwilling to enter into negotiations. Ironically, Athens finally agreed to meet at a time when its military is armed to the teeth as Greece's defense budget, which increased fivefold in 2021, indicates.

The country plans to spend $3.02 billion (TL 22 billion) on weapons this year – making it the 12th largest buyer of military equipment in the world. Moreover, the duration of mandatory military service has been increased from nine to 12 months.

The Greek government also plans to hire 15,000 professional soldiers by 2025. In addition to buying 10 training aircraft, Athens will establish a military aviation academy with Israel. It also stands to purchase 18 Rafale fighter jets from France – not to mention four new frigates and navy helicopters.