EU will miss the old TRNC a lot! 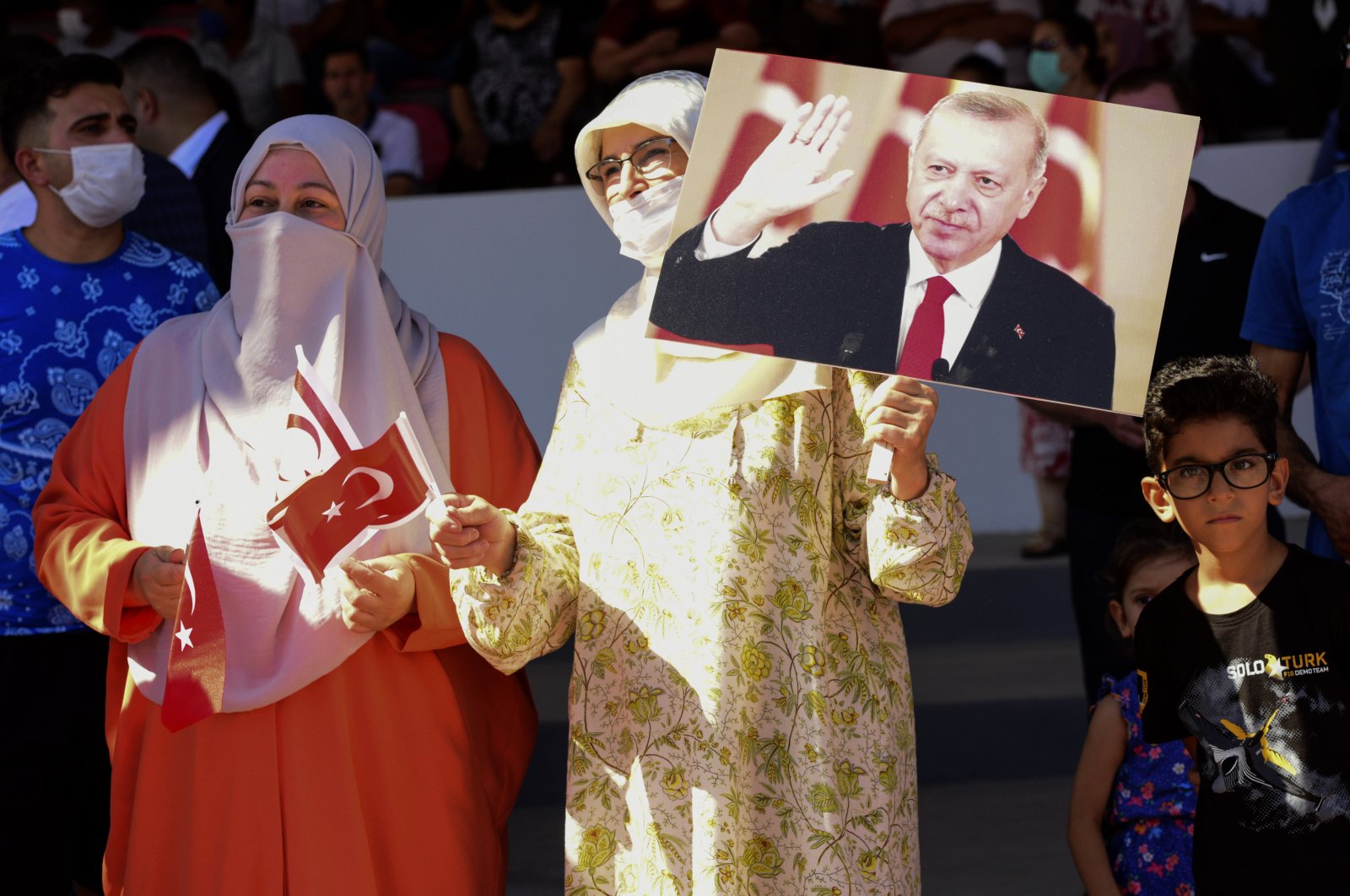 A Turkish woman (R) holds a portrait of Turkish President Recep Tayyip Erdoğan as another woman holds a Turkish flag during the military parade marking the Peace Operation that took place on July 20, 1974, in Lefkoşa (Nicosia), Turkish Cyprus, July 20, 2021. (AP Photo)
by Melih Altınok Jul 24, 2021 12:05 am

It is time that the EU acknowledges the sovereign equality of both sides on the island of Cyprus. The issue of Turkish Cyprus continues to live in the collective memories of the Turkish nation

Turkish President Tayyip Erdoğan's visit to the Turkish Republic of Northern Cyprus (TRNC) with his ministers and partners in the People's Alliance was watched with interest by the whole world.

Erdoğan's arrival on the island on the anniversary of the Peace Operation that took place on July 20 has a great symbolic significance. Cyprus, which has been under Turkish rule for centuries, is a national issue on which a consensus has been reached for the Turkish community and parties of different views. The right and left parties also embrace the slogan “Cyprus is Turkish.”

Even Kemal Kılıçdaroğlu, the chairperson of the main opposition Republican People’s Party (CHP) in Turkey, who gave moderate messages to the West, had to send nationalist tweets about the Cyprus case to his constituents during the hours when his rival Erdoğan was on the island.

On this visit, Erdoğan announced the Kulliye project under which a presidential complex and parliamentary building will be made for TRNC. This project marks a new stage in the national agreement with the nation.

By giving this gift to Nicosia, Ankara announced to the world that the elected, sovereign TRNC president will no longer reside in the residence of the British colonial deputy governor.

In the coming days, we may witness further moves, including the recognition of the TRNC by some states.

How did it get to this point?

However, it came to an end in 1963, after the Greek Cypriots unilaterally annulled the Constitution with the use of force. The Greek Cypriots who took up arms to achieve their Enosis goals (EOKA), continued the oppression and embargo against the Turkish Cypriots. Hundreds of Turkish civilians were killed. EOKA leader Nikos Sampson, with the support of the Greek junta, staged a coup on July 15, 1974, against then-President of Cyprus Makarios III in order to connect Cyprus to Greece. With this coup, the sovereignty and territorial integrity of Cyprus were targeted.

After the coup, Turkey turned to diplomatic initiatives at the first stage, in accordance with the 1960 Treaty of Guarantee. Negotiations were also held in London on July 17-18, 1974. When the negotiations failed, Turkey started the Cyprus Peace Operation on July 20, 1974, using its right of guarantor and taking into account the security of the Turks on the island. The island was split into two, with separate states established as the Turks in the north and the Greeks in the south.

The actual situation, which has continued since that date, changed radically in the initial years of Erdoğan's rule. Erdoğan supported the United Cyprus project as the EU wanted. For the reasons I have described above, he took a great political risk. As a result, in the unification referendum held in 2004, while the "yes" votes were in majority on the Turkish side, the "no" votes were victorious on the Greek side.

The EU, on the other hand, openly violated its promises and laws and admitted half of Cyprus, which had a sovereignty problem, to the union, even though it was the Greek Cypriots who were the party blocking the solution.

Judging by the statements of the EU officials, who use an iron hand in a velvet glove, they seem unaware of how clear this historical background is in Turkish people's collective memory. They still do not seem to understand that the determination announced to the whole world from the TRNC on July 20 is the common will of the Turkish people, whose patience is running out in the Motherland and the TRNC.

Let us remind you once again.

For Cypriots, the concept of a "solution" has acquired a meaningless context. The people of the TRNC said, “Let's focus on the economy and go about our business. We are a separate state and let's take care of this state."

We have no patience for even the slightest concession to be made in Cyprus in return for fulfillment of the dream of full membership to the EU, which we understand will never come true for Turkey either.

Let me even go further and say that the hypocrisy of the EU has brought the public to the point of accepting concessions for any step that has not been taken for the use of rights that have been de facto "frozen" for years. (The closing of the ghost town of Varosha, known by the island's Turkish community as Maraş, etc.)

After this time, there is no turning back.