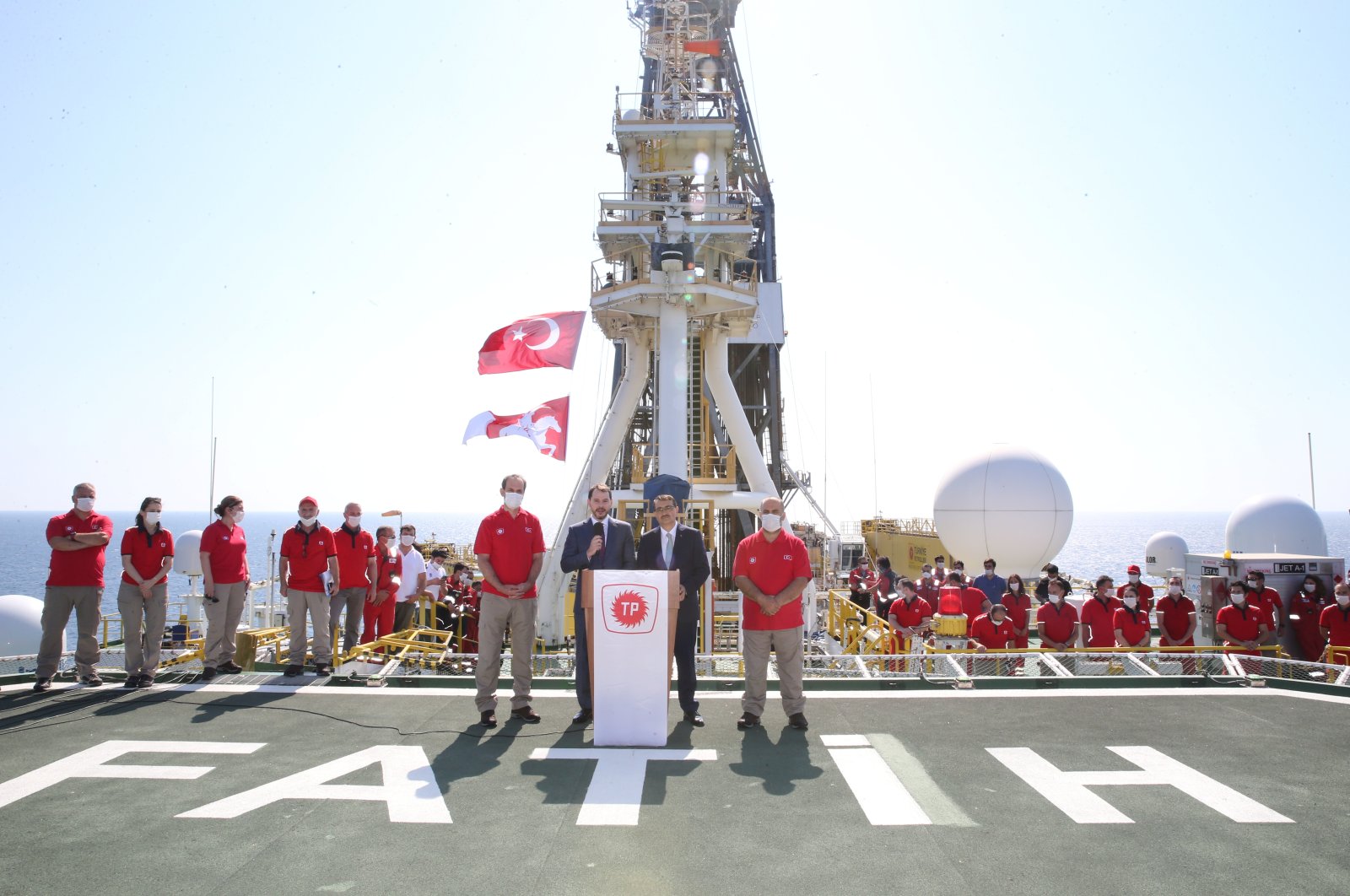 Addressing the nation on Friday, President Recep Tayyip Erdoğan announced that Turkey’s Fatih drilling vessel discovered the country’s largest natural gas reverse in its history in the Tuna-1 zone of the Black Sea. Erdoğan said the reserve discovered amounted to 320 billion cubic meters (bcm) of natural gas. There are additional layers below the discovered reserve, according to Erdoğan, who stressed that there could be more natural gas in the same spot.

The Tuna-1 zone, which was renamed the “Sakarya natural gas field” after the discovery, is some 150 kilometers (93.2 miles) from Turkey’s coast and close to the exclusive economic zones (EEZ) of Bulgaria and Romania. It is also not far from Romania’s Neptun block, where the largest gas reserve was discovered eight years ago by the Romanian integrated oil company Petrom and the American multinational oil and gas corporation Exxon.

Speaking on the deck of the Fatih vessel on Friday, Treasury and Finance Minister Berat Albayrak, who has made significant changes in Turkey’s energy policy during his term as the energy minister, said that the discovery marked a new era and the country’s current account deficit issue will be off the agenda thanks to the discovery. Ankara hopes to begin production by 2023.

Energy demand has been one of the main burdens on the Turkish economy, and the country is dependent on energy-rich countries. Turkey produces only about 1% of its natural gas locally and spends around $50 billion (TL 368 billion) annually on foreign energy. Ankara buys one-third of its natural gas from Russia, one-fifth from Azerbaijan, 17% from Iran and 12% from Algeria.

For decades, it was generally believed that Turkey’s geology was not feasible for hydrocarbon reserves. But successful discoveries of regional countries such as Israel, the Greek Cypriot administration and Egypt in the Eastern Mediterranean pushed Ankara in recent years to invest more in energy exploration.

In 2017, Turkey developed a new energy policy and bought seismic and drilling ships in order to start exploration in its territorial waters in the Black Sea and the Eastern Mediterranean. The country’s goal was simple: To diversify its energy supply. As Russia and Iran both weaponize energy exports against it from time to time, Turkey has been looking into alternative sources.

The 320 bcm of natural gas is a significant discovery even though some inside and outside Turkey are skeptical about it. Over the last decade, Israel first discovered 320 bcm of gas in the Tamar field in the Eastern Mediterranean. Some 600 bcm found in the Leviathan field followed Tamar. At the Aphrodite field, the Greek Cypriot administration found 130 bcm of natural gas and is still continuing its exploration and drilling activities. Egypt, on the other hand, reportedly discovered 800 bcm of natural gas in the Zohr field, which is the largest-ever discovery so far in the Eastern Mediterranean. Maritime border disputes in the sea were fueled between regional countries after these discoveries. Currently, there is a race between littoral states of the Eastern Mediterranean to declare their maritime boundaries.

Once it becomes operational, the Sakarya Gas Field in the Black Sea is projected to ease the financial burden of Turkey for around eight years. It will also help the country solve most of its energy supply security problems for a while. Moreover, the recent discovery will make Turkey more ambitious to find more reserves in the Black Sea and the Eastern Mediterranean. Hosting multiple pipelines to connect the energy-supplier countries in Asia and the Middle East with the consumers in Europe, Turkey is known to have an appetite to become a regional energy hub. Domestic needs will always be a priority for the country, but there is a potential that it can turn into a new energy supplier, especially for European markets, if there are further discoveries. There is no doubt that the geopolitics of energy trade in its region will change if that happens.

Of course, developing offshore wells in the Sakarya Gas Field will take a few years, but in the short term, Ankara can still make some immediate gains from this discovery by using it as leverage. Turkey does not have to be quick to renew its energy contracts as they will expire by 2023 and 2026. However, it can use the gas find as a bargaining tool to renegotiate the terms and pricing.

Most importantly, energy contracts with Russia may turn into shorter-term contracts, while the new gas discovery will also be a challenge for the TurkStream pipeline, which stretches to Anatolia carrying Russian gas via the Black Sea. That is why Russia might offer significant price concessions to Turkey. As I said above, energy supplies have sometimes been weaponized against Turkey but now the discovery will possibly strengthen Turkey’s hand against Russia and Iran as well. As Moscow’s hand will be weaker against Ankara, two neighbors who have developed close ties in the last couple of years, Russia would prefer to draw closer in order to enhance collaboration on energy-transfer routes.

Meanwhile, further discoveries might positively affect Turkey’s relations with the European Union, which is heavily dependent on the energy resources of Russia. Since the European states seek alternatives to diversify their energy supply, they closely follow the developments in the Eastern Mediterranean where Turkey and Greece have been at odds. The importance of Turkey can increase in the eyes of the EU if it discovers more energy reserves, and it will not have any difficulties in transferring gas to Europe due to its existing energy routes. That would signal the beginning of a new chapter for Turkey and EU relations.

These predictions may sound immature, but this latest development opens the door slightly to new discussions over the energy geopolitics in Eurasia, making us consider the current equation and potential alterations to the regional energy game. As Turkey eagerly proceeds with its exploration and drilling activities, the other nations will continue to have their eyes on Ankara.