How did the world buy Assad’s 'war on terror' narrative? 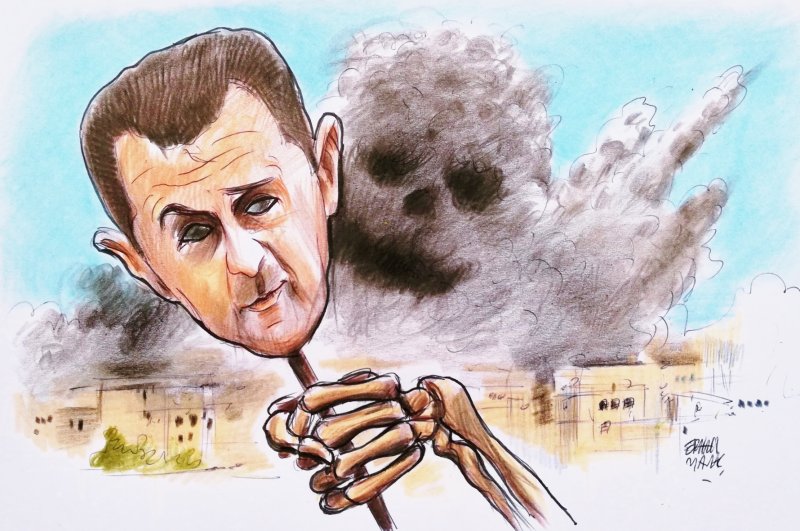 Since the start of the uprising in Syria, even before it turned into a civil war, dictator Bashar Assad used the words “terrorism” and “extremism” instead of “civil war.” He denies the existence of a civil war in the country and says that Syria is just fighting terrorists who are either living in Syria or have come from abroad and are supported by other countries like Turkey and the U.S. with the sole aim of destabilizing the country.

Terrorism has been the most prioritized security issue since 9/11. Since 2014, a series of deadly attacks by Daesh in the West further fueled fear about terrorist incidents and refugees have since become scapegoats of Daesh’s terror.

Since there is no universal agreement about the “right” usage of the terrorism label, it is easy to portray any group and person as a terrorist. Assad has used this loophole. Systematically rejecting the label of “civil war” between two domestic groups is an example of narrative contests that work as a propaganda machine and is used as a tool to change the course of interstate conflict. Assad, too, did not accept the ongoing hostilities in Syria, instead, he even went on to draw a parallel between what’s happening in Syria and Daesh terrorist attacks in Europe.

In 2015, for instance, he compared Daesh attacks and bombings in Paris to daily violence routine in Syria. He said that France had felt what they had been going through in Syria.

However, when Daesh attacked Turkey, a country that Assad accused of supporting opposition groups in Syria, he was silent. It was a strategy to make the Western world believe that he was not evil but the opposite was. He tried to depict them as terrorists and radicals as he has since day one. Some countries, even the U.S. was ready to buy it as they shifted their priorities in Syria. Instead of working on stabilizing the country, they initiated two more fights in the region. While they chose to back the outlawed PKK’s Syrian offshoot YPG in their fight against Daesh, they also overlooked the PKK’s goal to bring the war inside Turkey through its borders. However, Daesh and the PKK did not fight each other in Turkey, they attacked it together.

According to the former Barack Obama administration, Assad became the “least-worst option in Syria” in 2014 when it came to protecting U.S. interests. For Washington, Assad was the lesser of two evils, when they compared the Assad regime to Daesh. At first sight, it might look like this is the U.S. policymakers' idea, but in fact, they were tricked by Assad’s own narrative. Iran, and especially Russia spread this narrative on social media underlining that Assad was fighting terrorists, not civilians. However, he didn’t have one single battle with Daesh, he chose to kill as many opposition figures as possible ignoring how many civilians were killed in the meantime.

As the Nazi Joseph Goebbels said, you repeat a lie often enough and it becomes the truth. Before Daesh emerged and played its catalyzer role very well, he most probably hoped that his counterterrorism narrative strategy would help him avoid a fast defeat. Daesh was a prize for Assad as he was desperately seeking ways to defame the opposition.

Unfortunately, many countries underestimated Damascus’ capabilities for a long time. In the Assad regime’s playbook, there is always a plan. Even small opportunities are used for leverage, and there is no space for failures and accidents. The rise of Daesh was the biggest opportunity to apply this rule. Finally, Assad had found a way to convince the world that he is not the perpetrator of the crisis in Syria but the ones who were involved in the uprising.

When a clash appeared between Daesh and the opposition groups, he used all the tactics to push his opponents to spend a long time fighting. When they were fighting Daesh, he attacked the opposition groups from different fronts. Since the Western mainstream media was focused on Daesh and did not care about whom the notorious terror organization was fighting against, Assad’s strategy was missed. The journalists were asleep at the switch and paved the way for Assad to continue on the same path. It is actually working as his atrocities have been ignored. “Terrorism” narrative was his favorite diversion and what Daesh did between 2014-16 helped him divert the international focus in Syria.

Assad and his advisors studied the Arab uprisings very well and found a way to concoct the best possible scenario to protect the reign. They concluded that non-violent protests would end with the collapse of the regime. So, making reforms would make Damascus seem weak and that was not an option. In the beginning, he scared the Alawite minority of Syrians with retaliation from the Sunni majority and used the sectarianism card while he started to use brutal methods against the Sunnis. In the meantime, he kept saying that the protests were not peaceful and were being carried out by radicals aiming to bring “sharia law” to Syria.

Then he made his first move to provide a space for the extremist presence among his opponents to show that he was right. He released prisoners from Sednaya prison, which housed many al-Qaida-linked prisoners and battle-hardened extremists, to inject the poison in the veins of the opposition.

In an interview with a French-language weekly, Paris Match, in Nov. 2019, Assad said, “every few years, they grant amnesty to prisoners as it was a general policy before the war and there was no category to exclude the extremists.” This a very absurd argument. Was it just a coincidence that it happened in 2011 the year when the violence began? He sent those extremists to demonize the peaceful protesters in the very early weeks of the peaceful demonstrations while he had already started to use excessive force on the protesters. Those extremists joined the ranks of Daesh and Jabhat al-Nusra.

Thanks to the then Iraqi Prime Minister Nouri Al Maliki’s sectarian violence in the neighboring country, Iraq-Syria border security was loosened and many al-Qaida in Iraq (AQI) linked terrorists spilled over into Syria.

Assad was the one that orchestrated the influx of foreign extremist fighters in his own country. Daesh’s rise from the ashes of AQI surely ensured his survival. He labeled the civil war a “war on terrorism” between Syria’s military powers and Sunni extremists. After that, it was easy to carpet-bomb cities, destroy schools and hospitals, kill civilians under the pretext of fighting terrorists or use chemical bombs. With the active help of Hezbollah and Iran since the beginning of the war, and Russia’s coming to the ground in 2015, Assad’s war on his own people got more violent.

While the Assad regime and its most loyal backer Iran provided an opportunity for the rise of al-Qaida and Daesh in Syria, Damascus also allowed the radicals to travel abroad freely to confuse the Westerners. The extremists went abroad and recruited sympathizers, brought them to Syria for training and then sent them back. Assad’s clerics had already threatened the West; they kept their promise and made Daesh bombings happen in the Western countries. It was a “shock and awe” tactic that actually worked. The Western leaders who were against Assad’s rule became the targets of far-right and leftist political groups in Europe. And finally, Islamophobia – Sunniphobia is the right word actually – started to rise in the West as every Sunni was seen as a threat by the white supremacists and their circles of influence.

While Assad held the opposition for creating a state of panic among the people, destabilizing public security and damaging the basic infrastructure of the country by using weapons, ammunition, bombs and explosives, toxic products or any method fulfilling the same purposes,” he used all of those methods against his own people and tried to legitimize his crimes under the pretext of “war on terror.” In addition to weapons, ammunition and explosives, he used other brutal tactics such as airstrikes, barrel bombs, sectarian massacres, sieges, rape and tortures to neutralize resistance. He killed, threatened, silenced and displaced many civilians to make sure that the extremists take over the country.

But in the meantime, he never took a step to attack Daesh while it became stronger and more powerful. Daesh terror replaced Assad’s terror on the headlines. In favor of international media’s selective journalism, almost the whole world has been convinced that Assad is a dictator but he can leash the extremists. Obama administration’s indirect coordination with Iran, Russia and even the Assad regime during the fight against Daesh helped Assad’s plan succeed. It proved that Assad put his chips on “terrorism” narrative, played accordingly, gained time and changed the whole world’s perception.

With his “counterterrorism” narrative, Assad imprisoned thousands of people among diverse groups, non-violent activists, innocent civilians who just asked for reforms. Many of whom are still in prison. Even though there is evidence of torture in those prisons Damascus still denies it.

Root cause of the catastrophe

Syria’s horrific humanitarian crisis is the fruit of Assad’s “war on terror” narrative. In Syria, at least 500,000 Syrians – the exact figure is not known – were killed and more than half of the population displaced. Millions have fled to neighboring countries that have been carrying the heavy burden for almost nine years. One of them is Turkey as it hosts more than 4.5 million Syrians and now there is a huge risk of a new refugee influx in Idlib as the latest attacks by the Assad regime and its backers force people to leave their homes.

Assad regime is now deliberately killing Turkish security forces who are there under the Sochi agreement signed by Turkey and Russia in 2018. Once again, Assad tries to convince the world that Turkey is supporting terrorists. Turkey has never done and will never do that as it is not the guarantor of the terrorists but the opposition groups while Russia and Iran are the guarantors of the regime under the Astana process.

Turkey is there to protect its national security and the civilians trapped in Idlib to prevent another massacre in Syria and another refugee influx into Turkey. Let’s hope this time the world would not buy Assad’s “counterterrorism” narrative and see the horrific results of Assad’s long-time strategy.

Assad is not a leader who would fight against extremists as his problem is the opposition, not the extremists that he unleashed in the first place. He is also not the “least-worst option” in Syria as he is the perpetrator of the humanitarian crises and the civil war. He cannot control Syria without Russia and Iran’s help and because of this Syria will never be an independent country. Also, he would not have been able to come this close to winning against the opposition without their help. And most importantly, his violence, abuse, brutality paved the way for extremists to grow regionally and globally. This was his war on terror strategy: Open the way for terrorists and say that “I am fighting terrorism.”