Is Greece engaging in a frantic act? 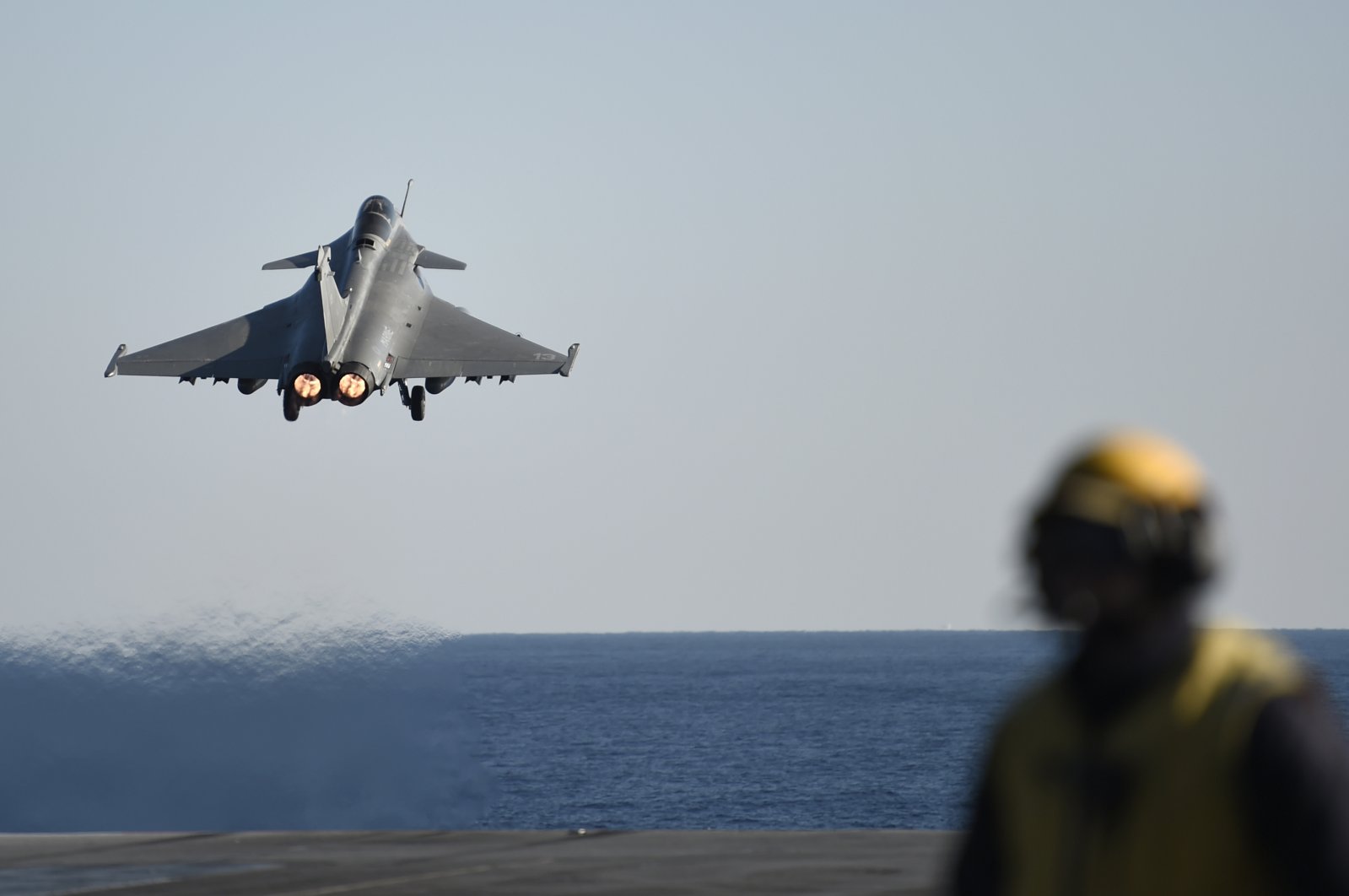 A French Rafale fighter jet takes off from France's aircraft carrier Charles-de-Gaulle, used in the U.S.-led operation against Daesh group in Syria and Iraq in the Eastern Mediterranean Sea, Dec. 9, 2016. (AP Photo)
by Burhanettin Duran Dec 28, 2021 12:05 am
RECOMMENDED

Greece has been arming itself aggressively in recent years, attempting to add F-35 fighter jets to its inventory of Rafale fighters, Belharra frigates and corvettes. In 2021, Athens spent 2.5 billion euros ($2.8 billion) on military equipment, quintupling its spending compared to the previous year. By next year, the Greeks will increase their military budget sevenfold anew.

Obviously, the Greek government’s decision to buy new planes and warships reflects its intention to reverse the balance of power in the Aegean Sea and the Eastern Mediterranean, which has been shifting in Turkey’s favor. At the same time, the Greeks have concluded negotiations on military cooperation agreements with France and the United States, which, according to The Wall Street Journal, consider Greece a “new bright spot” in Europe.

The same story recalled that Athens strengthened its relations with Washington, at the expense of Russia and China, under Prime Minister Kyriakos Mitsotakis. Against the backdrop of the growing liquefied natural gas (LNG) trade to Greece, the Journal noted that the U.S. Congress had passed a bipartisan bill to modernize the Greek army and add another layer of Washington’s security support to the Greeks in the Eastern Mediterranean. Finally, the newspaper highlighted that the U.S. military base in Alexandroupoli has become important for the American military presence in the Balkans and Black Sea.

Needless to say, Turkey could not possibly be happy about its neighbor's excessive spending on military equipment. Let us recall that President Recep Tayyip Erdoğan recently warned that Greece in its entirety has become “an American base.” Meanwhile, Turkey’s Foreign Minister Mevlüt Çavuşoğlu and Defense Minister Hulusi Akar have reiterated their country’s commitment to defend its interests in the Aegean Sea and the Eastern Mediterranean.

Most recently, Akar criticized the Greek government’s “armament show” and highlighted that Athens had been militarizing certain islands in violation of the international agreements: “They attempt to thrive over Turkey by arming themselves amid encouragement and acts of provocation by certain nations. That is a pointless effort. At the same time, (the Greeks) have been trying to form fresh alliances despite being part of NATO. We have been making the point that all (those partnerships) are artificial.”

The defense minister added that a Greek delegation was expected to visit Ankara for “the fourth meeting as part of confidence-building measures” and stressed that Turkey wants “the people of both countries to lead their lives, safely and prosperously, by taking advantage of (the region’s) riches.”

Here’s why I brought all that up: In recent months, the government in Athens has frequently mentioned increasing its maritime boundary by 12 miles (19.3 kilometers) in the Aegean Sea, counting on its fresh cooperations. Prime Minister Mitsotakis on Jan. 20 said that his government’s decision to increase its territorial waters in the Ionian Sea was “a message regarding our eastern border as well.”

Last week, in a joint press conference with Bulgarian Prime Minister Kiril Petrov, the Greek leader claimed that Turkey needed to “end its acts of provocation, including the existing threat of ‘casus belli’ for normalization.”

Experts note that the same idea, which Foreign Minister Nikos Dendias originally promoted, could evolve into “a show of courage” for Athens. In other words, they warn that the Greeks could unilaterally increase their maritime boundary in the Aegean Sea by 12 miles, which will be squarely based on a mistaken assessment of their power in light of their fresh partnerships with the U.S., France, Israel and the Gulf states. That decision would not only violate the normalization process but also lead to an entirely different situation. Hence, my doubts about Athens engaging in such a frantic act right now. For the record, Ankara may favor dialogue, but it won’t turn a blind eye to a fait accompli.

Those folks in the Western media, who talk about Greece becoming an “alternative” to Turkey, cannot seem to make sense of the changing balance of power around the world or appreciate how much both sides need each other in the long run. In a world of intensifying great power competition, Turkey will continue to assume significant roles on the regional and global levels.

Athens would do well to heed Ankara's friendly warnings.