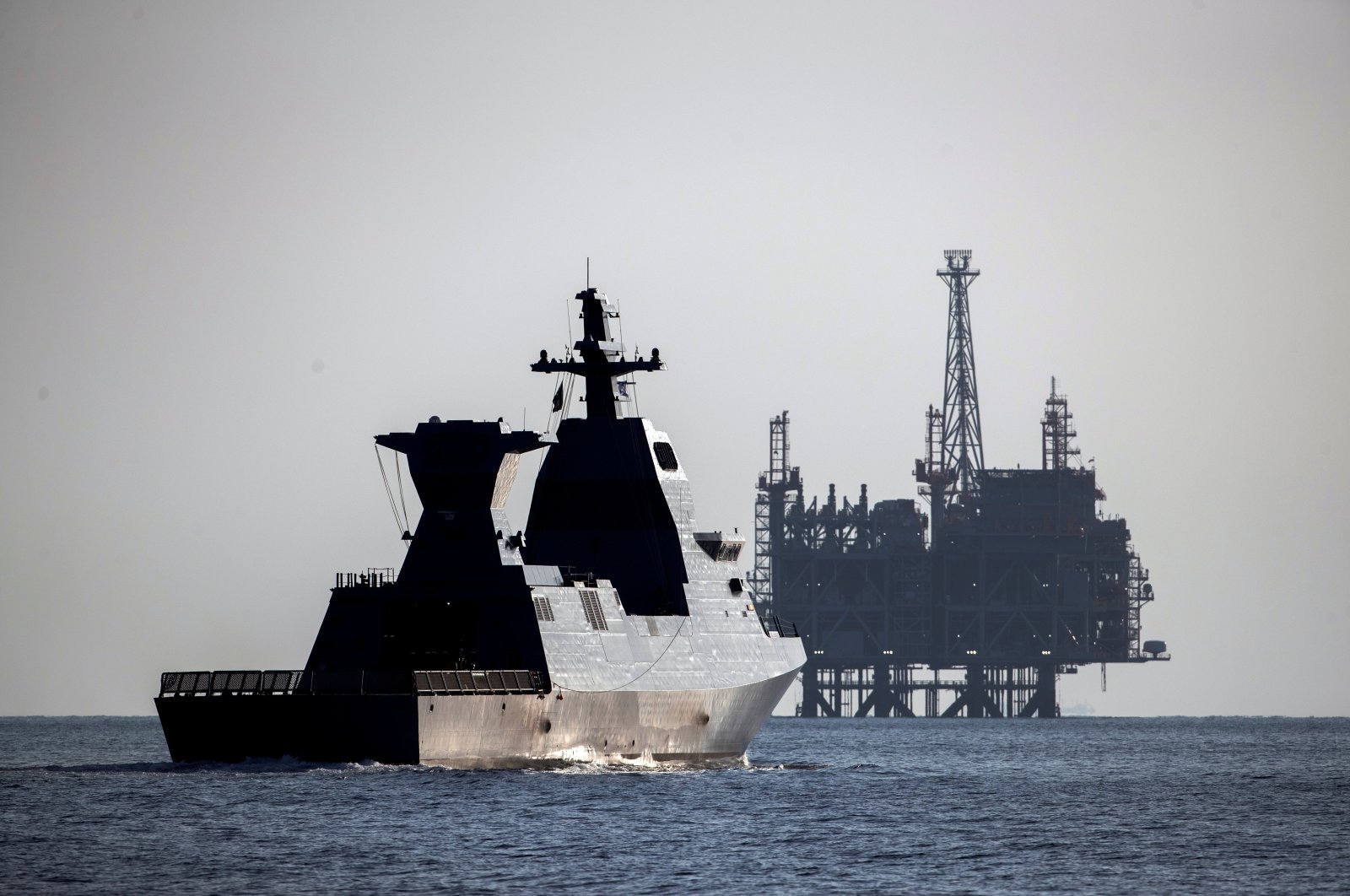 Israel's Saar-6 corvette, a warship dubbed "Shield," cruises near the production platform of the Leviathan natural gas field after a welcoming ceremony by the Israeli navy marking its arrival in the Mediterranean Sea off the coast of Haifa, northern Israel, Dec. 1, 2020. (Reuters Photo)
by Hakkı Öcal Apr 12, 2021 12:05 am
RECOMMENDED

During my long years in Washington D.C. I had several Jewish colleagues who happened to know Hebrew even though they were not from Israel. This is one of the things that I appreciated about the Jewish diaspora: They taught their children to speak and write perfect Hebrew. (Whereas, the children of my Iranian, Arab, Greek and Turkish colleagues had to speak with their visiting grandparents in English. But that is not the matter for discussion now.)

One of my good Jewish friends, Chaim would whisper through his teeth about those who would erroneously think that they were entitled to do whatever they were doing, without his help: Af’al atzmecha! Those who used to think too highly of themselves would of course come back begging for Chaim’s help. He could tell when someone was flying solo when they became too excited over their ways. He would say, in a hushed tone, “Af’al atzmecha” and wait and when they came back, he would provide the needed help easily and gladly. They would always come back to him after falling on their faces.

He would call them “chai bi seret” because it was as if they were living in a movie; that fairy tale, that unrealistic fantasy world that wouldn’t allow them to go anywhere. I used to like this one because it sounded similar to one we have in Turkish. (Allow me an aside: “Seret” is a Biblical term and today it means “movie” in Israel.)

If you are living in a movie that you created in your fantasy, you send all your warships and warplanes to joint maneuvers with Greece, Cyprus and France in what the Jerusalem Post calls “an effort to strengthen control over the Eastern Mediterranean Sea.” It is exactly what my friend would silently criticize: You are flying solo and you are “chai bi seret” my friend: You are living in a dream world.

But before going into the details of that dream, let me repeat the answer of a Talmud teacher to the question, “Who was he who had been allowed to be eaten by wolves by her sisters on a mountain top”?

– “They were not sisters but brothers; it was not on a mountaintop, but in a desert; wolves hadn’t eaten him but the brothers lied about it."

Sometimes a simple “Ismael” wouldn’t do!

Likewise, the long and short of it goes like this: Israel doesn’t have a navy. It is not Cyprus but the Greek sector of the former republic of Cyprus. The French navy is mostly immobile nowadays and Greece cannot afford gasoline for its ships and planes unless Israel secretly fuels them. No, it is not going to “strengthen its control over the Eastern Mediterranean.”

Even if we fancy that it does, the “EastMed” is not a small pond in the neighborhood. It is a pipeline that includes 1,300 kilometers (807 miles) of offshore and 600 kilometers of onshore sections “to transport natural gas from the Levantine Basin in Israel, as well as from the gas fields in Cypriot waters, to Greece and Italy.”

In their legalese, the international lawyers call it “the gas fields in Cypriot waters” but (a) there is no entity called Cyprus anymore, and (b) when you restore that republic you need to include Turks on that island in the decision-making mechanism – who may or may not endorse the 2011 agreement.

It is obvious that the disintegration of Turkish-Israeli relations after 2010 provided Israel with an incentive to form ties with the Greek Cypriot administration. But a long 11 years have passed since and it is time for Israel to put its thinking cap on and start thinking about the alternatives: a shorter route on terra firma, as they say – stronger political, military and economic cooperation with Turkey. Ask the Sephardim immigrant of 1492 and reread the 1950 Ben Gurion-Menderes Alliance of Periphery document.

The Ben Gurion-Menderes Pact is not as complicated as the “Deal of the Century” written by former United States President Donald Trump and his son-in-law. You may add one article to that historical pact about treating the Palestinian state as equal. Then you don’t need Greece's Kyriakos Mitsotakis and France's Emmanuel Macron. This move will also prove to Israel’s overseas friends and close-by neighbors how realistic in fact Israel is. It is not as cumbersome as holding large-scale extraterritorial drills in Crete or bootlicking in Jeddah.

Your navy, my navy

The Greek navy may have the “objective of addressing modern challenges and threats in the marine environment” but Israel doesn’t. Israel’s navy is relatively small compared to other Israel Defense Force (IDF) units and Israel’s 150-mile-long exclusive economic zone (EEZ) is too large for it.

No exercise is going to make the Greeks dependable allies if that area has to be defended against, say, Turkey. The IDF people must have realized that the Aegean Sea is too difficult, especially when it comes to underwater warfare.

The British tested the Greek's dependability in the 1920s and they didn’t like it. The IDF has regularly joined the U.S. Navy in military exercises, but France has just participated for the first time in a naval drill with it. The commanders should be asking (a) why now? (The correct answer would have “Total SA” in it), and (b) how did it go? (The correct answer would have the word “badly” in it.)

The Arab Spring might have more important consequences for Israel than for any other non-Arab country. Throughout the whole region, there are threats coming from uncertain directions. Israel also has important policy issues stemming from the Syrian crisis.

While Syria continues to be a battleground of proxy wars between regional and international rivals, Israel cannot (in fact, should not) busy itself with underwater battlegrounds.

All Israel needs is a new government that can take its head out of the clouds and see the realities of the world as they are, not “chai bi seret.”