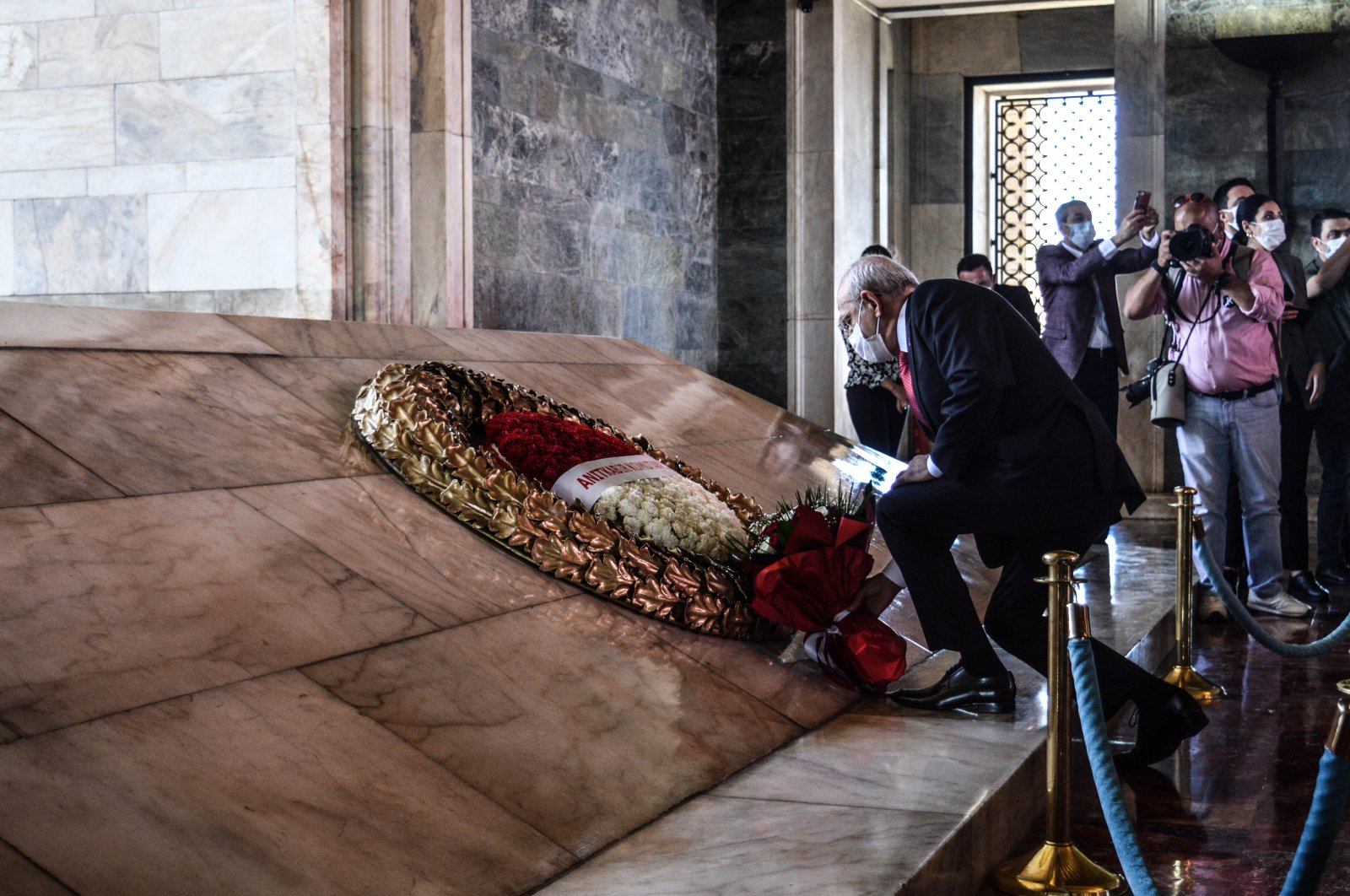 Kemal Kılıçdaroğlu, the chairperson of the main opposition Republican People's Party (CHP), lays a bouquet of flower at Anıtkabir, the mausoleum of modern Turkey's founder Mustafa Kemal Atatürk, on the commemoration of Atatürk, Youth and Sports Day in Ankara, Turkey, May 19, 2021. (Photo by Getty Images)
by Burhanettin Duran May 27, 2021 12:05 am
RECOMMENDED

Turkey’s 2023 election is two long years away, but there is heightened activity in the country’s political arena. Although the election is not on the horizon yet, there is already lots of chatter about potential candidates and alliances. Moving forward, we have every reason to expect an uptick in bickering and new movements regarding campaign-relevant issues.

The current international atmosphere, too, favors these developments. The Biden administration has not finalized its Turkey policy yet. The European Union, in turn, has been waiting for the United States – which creates a fertile ground for such activity within the country’s borders.

Turkey’s opposition leaders, meanwhile, continue engaging in negotiations over potential presidential candidates, the nature of their alliances, and the number of candidates that will contest the election in each round.

Kemal Kılıçdaroğlu, the main opposition Republican People’s Party (CHP) chairperson, is not only courting speculation about his intended candidacy, but he is also attempting to update his public image to convince voters that he is serious about running.

Part of that effort is geared toward winning over conservatives and young voters. The main opposition party’s most recent "documentary" was certainly produced with that goal in mind.

Talking about his own party, Kılıçdaroğlu engages in a more indirect alienation of the ruling party than in the past. Furthermore, he aims to win over undecided voters, who are still closer to the AK Party than others, by making the following claim: “Erdoğan has become a burden on Turkey. He cannot govern the country. I recommend him to call for an election and express his intent to step down in order to spare all 83 million citizens more pain.”

His attack on Erdoğan is mixed with a commitment not to start a witch hunt after the AK Party’s demise. Kılıçdaroğlu thus suggests that conservatives do not have to worry about reversing their gains regarding the lifting of the headscarf ban and allowing religious instruction.

For the record, the memory of Kılıçdaroğlu referring to Erdoğan as a “dictator” and blaming his supporters is still fresh. Again, he recently talked about “taking over” businesses, media outlets and nongovernmental organizations (NGO). The CHP chairperson also threatened countries intending to invest in Kanal Istanbul, along with bureaucrats and others.

Keeping all this in mind, what does Kılıçdaroğlu hope to accomplish here? He wants to get people talking about his potential candidacy by repairing his image. He thus wants to keep a lid on the claims and manipulations coming from other members of the Nation Alliance as well as mayors affiliated with his own party. The purpose of that plan is to stop the pro-opposition alliance’s eventual candidate from taking hits.

If Kılıçdaroğlu indeed intends to run for president, he will stick to this new discourse for a long time and leave strongly-worded speeches to his deputies and spokespeople. Either way, the CHP leadership has a vested interest in raising its chairperson’s profile.

Whatever Kılıçdaroğlu ends up doing, the voters will keep asking the same question: Who can shoulder Turkey’s burden?

The country’s main short-term challenge is to reverse the coronavirus pandemic’s negative impact on the economy. A longer-term issue is the consolidation of Turkey’s international standing – by defending its interests in Libya, the Eastern Mediterranean, Syria, Iraq and Nagorno-Karabakh.

Not a plan yet

It is due to those critical concerns that I oppose the opposition’s use of anti-Erdoğanism as a "political opioid." Therefore, I urge the various parties, with their conflicting ideological backgrounds, to unveil their visions for the Republic’s second century.

For the record, the opposition leaders haven’t even settled on a plan to restore the parliamentary system. They do not have a series of successfully negotiated policy proposals.

The voters do not know what the Turkish national identity means for each part of the opposition. Where do they stand on the Kurdish question, Turkey’s Syria policy, the PKK/YPG or bilateral relations with the U.S.? How do they see the pro-PKK Peoples' Democratic Party's (HDP) pan-Kurdish nationalism and its endorsement of terrorism – which resulted in the abandonment of its plan to become a nationwide movement?

The opposition cannot just ignore those issues until Erdoğan is gone, and signal that they can address the country’s problems. No coalition, which is formed in the absence of that kind of debate, can reasonably manage the challenges that Turkey faces. It can neither defend Turkish interests nor promote political stability during the fragile transition.