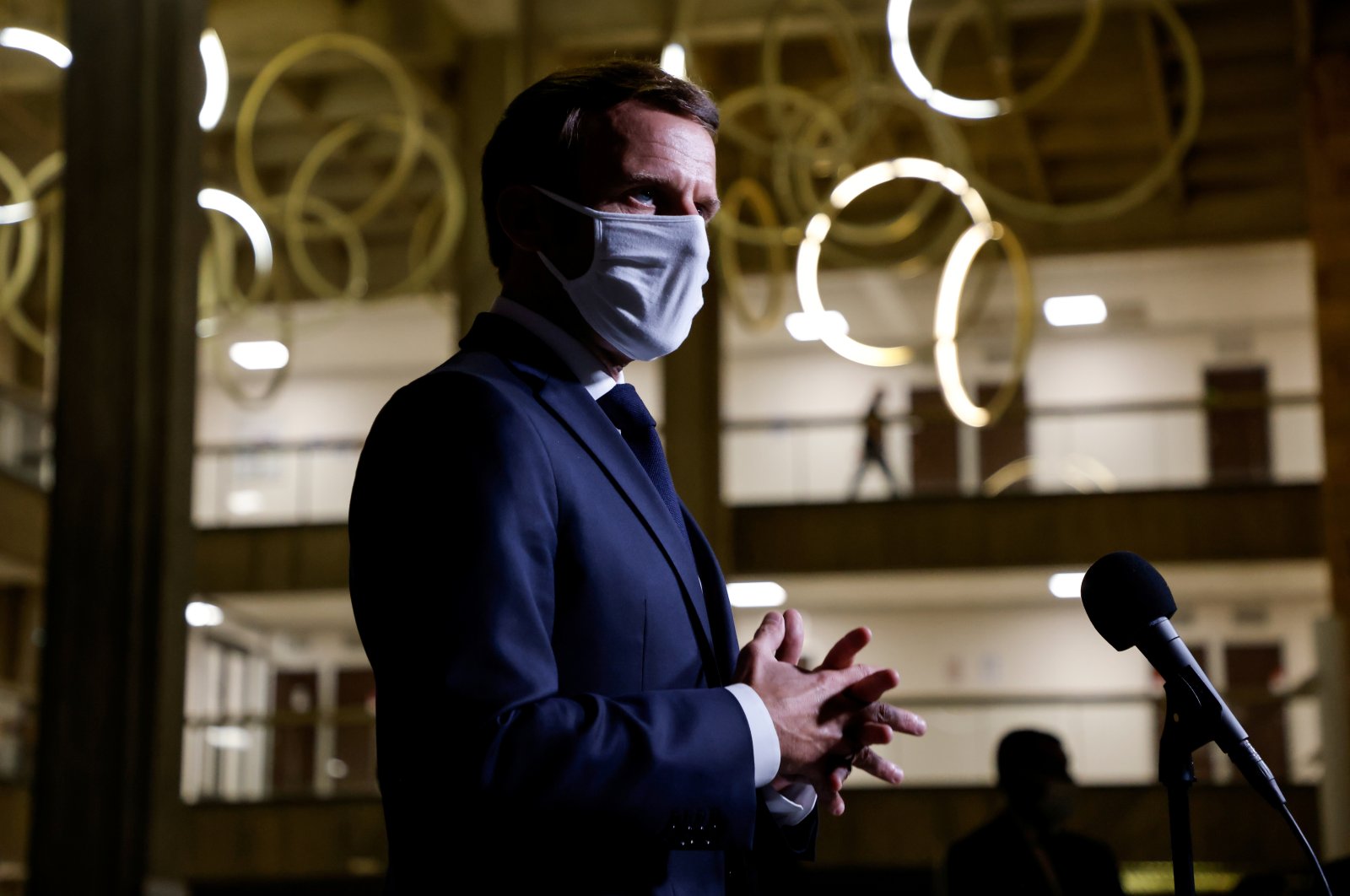 On Jan. 12, 2015, an estimated 3.7 million people rallied in shows of unity and solidarity across France with more than 40 world leaders marching with them shoulder to shoulder following the killings in Paris.

From Jan. 7-9, 17 people were killed by three terrorists in attacks on the satirical Charlie Hebdo magazine headquarters, a kosher grocery store and the general area of the Paris suburb of Montrouge.

Although the march was organized in a short amount of time, millions walked the streets of Paris chanting, "Je suis Charlie" ("I am Charlie").

According to France's Interior Ministry, the demonstration was larger than the rallies staged when Paris was liberated from the Nazis in World War II. The gathered crowd was described as the largest in France's modern history. Around the world, from Hong Kong to Tunisia, crowds gathered in major cities illuminating their famous monuments in the Tricolor.

Charlie Hebdo is a satirical newspaper that has a reputation for standing up to authority, confronting what is held sacred or questioning any group claiming supremacy.

After publishing cartoons that mocked Islam on a number of occasions, in 2015 the magazine printed numerous images that insulted the Prophet Muhammad in a move that provoked Muslims for who drawing the prophet is considered blasphemous and prohibited in the Quran. In simple terms, the editors of the "irresponsible magazine"(their own words) hurt the feelings of believers of Islam.

The Charlie Hebdo attack was different than other massacres because it was seen as an attack on freedom of speech. In the wake of the attack, the world seemed to me, to think that there was nothing more important than the freedom of expression. I personally believed the holy principle of freedom of speech was superior to everything.

If that were the case, people would have the right to freely express all of their opinions regardless of whether they criticize or mock what is sacred to others. I was aware that the French law didn't protect unrestricted free speech.

For example, condoning terrorism is a crime and denying the Holocaust is banned in France. But after the millions-strong march, I thought things had changed as the streets of Paris felt like an outdoor temple revering in divine free speech that day. But I was wrong. A few days after the historic rally, French authorities began to arrest people on charges of glorifying or defending terrorism online.

It was time for nations to better understand why disaffected citizens were joining radical causes. There should be efforts to get to the root of the problem especially in Western countries, such as France where the Muslim population is around 5 million.

Unfortunately, the French government chose to follow an extreme version of secularism or laicity. Depicting the Charlie Hebdo attack as France's 9/11, the country started to change radically, maybe more so than that the U.S. was changed after the fall of the Twin Towers.

In 2017, Emmanuel Macron went head-to-head against Le Pen in the second round of the presidential elections after a first-round vote brought centrist, left-wing and moderate voters together against a possible far-right presidency.

Coming to power as a centrist and having no established party, ideology or tradition, Macron was free to govern France for a full five years avoiding populist extremism, which was rapidly spreading across Europe and beyond.

He was viewed as the one liberal, democratic politician who could stem the tide of populism sweeping the globe. However, he has become the most populist leader in Europe.

His supporters rationalize his policies saying if Macron didn't do something about the populist threat he would be replaced by a far-right leader. As the protests of yellow vests began in November 2018, his approval ratings sank to 29%.

While his globalist supporters went quiet, Macron may have thought he would not be able to secure his seat by continuing to take on the populists who were gaining ground every day, opting to embrace populism instead.

The rhetoric of hatred

The French president did not stop there and gradually adopted a strong anti-Islamist rhetoric intended to draw in the Islamophobes. Today, so-called "secular" hatred towards Muslims has become a part of everyday speech for the French government as well as its media. French Muslims keep asking Macron to stop stigmatizing them, but his normalization of hate speech against Islam has almost legitimized the institutionalized discrimination towards the France's Muslim community.

Taking further steps, the French President recently said "Islam is a religion that is in crisis all over the world today, we are not just seeing this in our country." Adding that he is seeking to "liberate" Islam in France from foreign influences by improving the oversight of mosque financing. He announced a law against religious "separatism" and outlined new measures to "defend the republic and its values and ensure it respects its promises of equality and emancipation."

His supporters argue that the upcoming draft bill against "separatist" threats will also include other groups like White supremacists when it is clearly targeting Islamist movements. French Muslims now fear that the extremists will not be the only target of the state and public hatred towards Islam as a religion will increase.

Macron has no tolerance for Islam but at the same time asks Muslims to be tolerant of insults toward their religion. If it continues like this, the problem won't be the prohibition of respecting Islamic values but the active obligation to attack them.

Then, it shouldn't come as a surprise to hear that Muslim kids are forced to eat pork at school or draw cartoons of the Prophet Muhammad under the guise of "being a true French citizen."

Unfortunately, there have been more tragic incidents in France as a result of Islamophobia and extremism. Last week a school teacher was beheaded by an extremist for showing cartoons of the Prophet Muhammad during a class, while two Muslim women were stabbed under the Eiffel Tower as the attackers shouted "Dirty Arabs" this week. We will continue to see cases like these if the French government continues to encourage Islamophobia.

Noticing the double standards between freedom of speech and freedom of religion after the Charlie Hebdo attack, many Muslims around the world came to see the event as a milestone. From that day onwards they knew Islam would be attacked again under the pretext of being a non-peaceful religion and these attacks would not be limited to harsh words or insults.

Charlie Hebdo actually paved the way for extremists, who were looking for a pretext to attack, one of whom pledged allegiance to Daesh and the other two declared their loyalty to al-Qaida in the Arabian Peninsula (AQAP). A Yemeni branch of al-Qaida took responsibility for the deadly attack against Charlie Hebdo, claiming the al-Qaida leadership chose the target and the massacre was in retaliation to the depictions mocking the Prophet Muhammad.

All Muslim countries, including the French Muslim community, immediately condemned the Charlie Hebdo attack. As radicalization began to spread, particularly since the evolution of the Daesh terrorist group, Muslim countries played a major role in fighting the notorious terror organization. However, their efforts were not enough to stifle the rise of Islamophobia around the world as Islamophobic incidents including far-right terrorism, motivated by a variety of ideologies, started to increase.

In France, more than 1,000 Islamophobic incidents occurred in 2019 including 70 physical attacks. While intelligence agencies in the West warn that white supremacists are becoming a more dangerous threat every day, countries like France do not listen. Fortunately, not all of the Western countries follow the same path.

This time there were no global marches for the victims, no promises of solidarity and unity from other countries, no condemnation or warning of rising extremism from world leaders.

Other than Muslim countries, only German Chancellor Angela Merkel described the mosque attacks as "terrorism" when expressing her sorrow over the "citizens who were attacked and murdered out of racist hatred."

Regardless of the lack of support she received from the rest of the Western world, New Zealand's Prime Minister Jacinda Ardern worked her hardest to ease the pain of the families of the victims.

She took a decisive stand against terrorism in a world where even liberal leaders cater to white-supremacists in a bid to keep votes. In her own words, her role was to "voice the grief of a nation."

She was the face of New Zealand and denounced terrorist attacks to the world. Following the attack she visited the families of the victims, wearing a headscarf to show respect, and promised to ensure their safety in mosques across the country.

Ardern opened the next session of New Zealand Parliament with an evocative "Assalamu alaikum" message of peace to Muslims and vowed never to utter the name of the terrorist. "He is a terrorist. He is a criminal. He is an extremist. But he will, when I speak, be nameless," she said.

There was a recitation from the Quran, a tribute to the souls of the Muslims killed in the attacks. Led by Ardern, all the MPs, wearing black had a moment of silence and listened to the recitation. Across New Zealand the public mourned the victims, visited mosques and placed flowers on memorials. In the following days she declared a ban on all military-style-rifles, including assault and military-like semi-automatic rifles. The enthusiastic public showings of support for Ardern has now come to be known as "Jacindamania."

This week, Ardern won a landslide victory in the country's general elections. She has led the center-left Labor Party to its best result in 50 years, winning 49.1% of the vote.

Western leaders such as Emmanuel Macron may think that tolerance towards Islam and Muslims would destroy their political career but in fact it has been the making of others just like Jacinda Ardern.

Ardern has been depicted as "anti-populist" in the media for a long time and we can credit her victory to her sympathy and compassion. Uniting the country she has been an example to other world leaders who adopt populist rhetoric out of fear of being replaced by right-wing politicians and whose policies cause divisions. I know I am trying to keep the faith, but what will be left to us if we also lose hope.