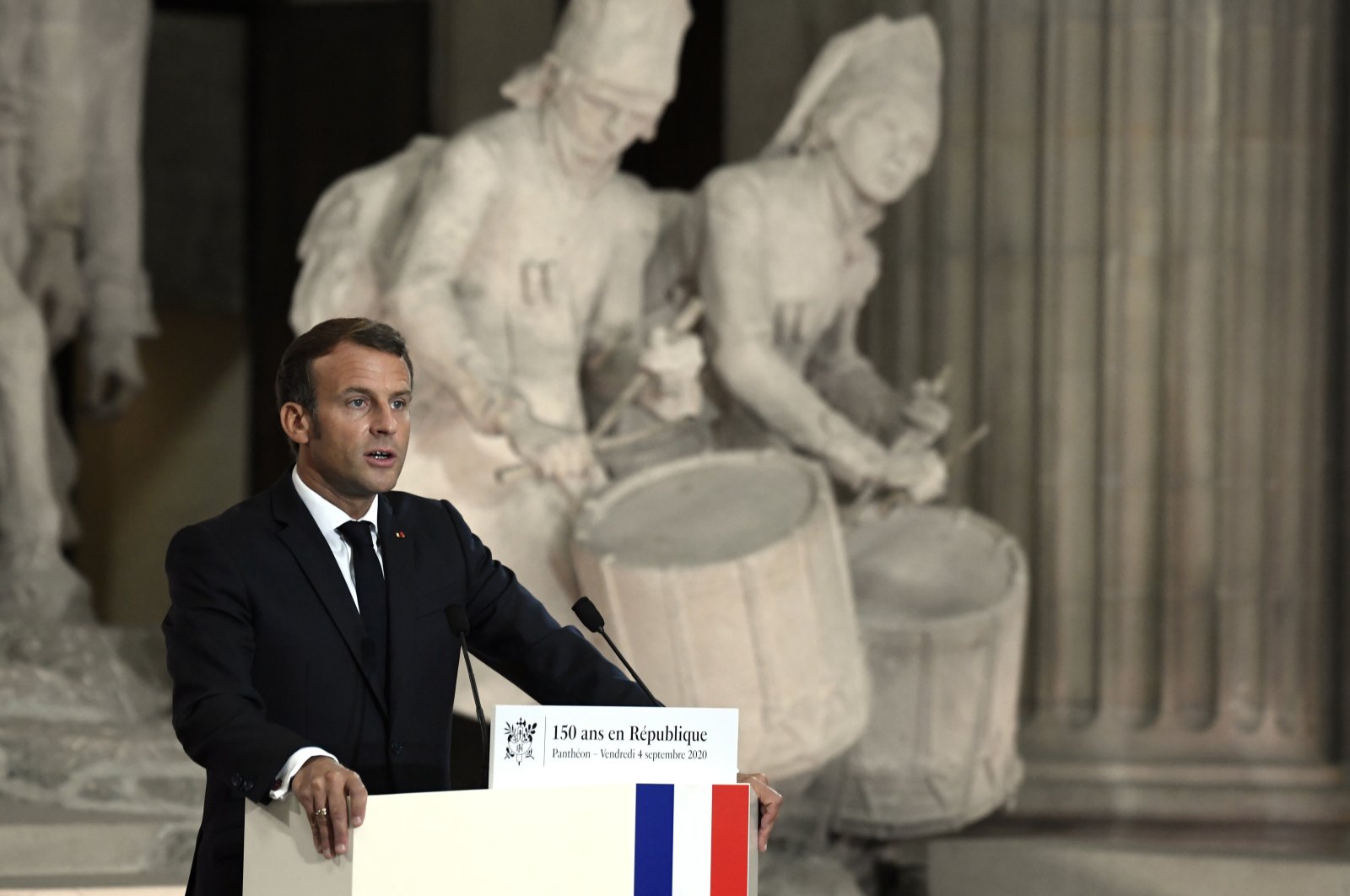 French President Emmanuel Macron speaks during a ceremony to celebrate the 150th anniversary of the proclamation of the French Republic, at the Pantheon monument, Paris, Sept. 4, 2020. (AP Photo)
by Burhanettin Duran
Sep 08, 2020 12:05 am

The power struggle in the Eastern Mediterranean rages on. Even the United States, otherwise preoccupied by the upcoming presidential election, is calling for de-escalation, yet pouring fuel on the fire through its actions.

The U.S. decision to lift a longstanding embargo on the Greek Cypriot administration, albeit designed to curb Russia’s influence over that territory, effectively encourages the maximalist goals of Greece and the Greek Cypriot administration in the Eastern Mediterranean. With the upcoming election and the possibility of a new president taking over in January 2021, the U.S. is unlikely to assume an active role in de-escalating tensions.

Although the European Union, under Germany’s rotating presidency, could take fresh initiatives until the year’s end, France’s aggressive position undermines all of Berlin’s constructive steps.

It would hardly be unsurprising, therefore, if the Eastern Mediterannean were to remain “the world’s most dangerous waters” until the new year.

Since a potential clash between Turkey and Greece would drag NATO into serious turmoil, it is critically important to keep tensions under control at least until the U.S. can start focusing on external affairs again. If Germany surrenders to the push for sanctions against Turkey “to demonstrate power” at the EU leaders' summit on Sept. 24, it will become even more difficult to manage tensions in the Eastern Mediterranean.

It is no secret that Emmanuel Macron wants to fill the power vacuum that Washington’s partial withdrawal has created. The French president’s recent steps to install a new government in Lebanon and throw his weight behind Iraq’s fight against the terrorist organization Daesh reflect that objective.

The problem with the French position, however, is that Macron’s ambitious regional policy is intended to facilitate confrontation and competition vis-a-vis Turkey. That is indeed a dangerous game, which taps into the image of Turkey as “Europe’s other” – a driving force behind Brexit – and exploits the European instinct to “contain Turkey” and “discipline President Recep Tayyip Erdoğan.”

Indeed, Macron’s real purpose is to exploit Greece’s greed in an attempt to reclaim Syria and Iraq, where Turkey has assumed a leadership role in recent years. As such, the French president displays the kind of European leadership that can overshadow Germany as the continent’s top military power. If Berlin surrenders to French policy, Europe’s own interests will be at stake.

Macron, who responded to Turkey’s military operations in Syria by claiming NATO to be “brain dead,” now seeks to draw a red line in the Eastern Mediterranean. Against the backdrop of the U.S. and NATO's withdrawal from the region, he claims that Turkey, as a “regional imperial power,” has embraced its “historical fantasies” anew.

The French president seems to forget that people in the region already know that France is not a regional power and indeed, has colonial fantasies.

Macron’s policy of alienating Turkey, however, is incompatible with Europe’s strategic interests. Indeed, he threatens to collapse NATO’s southern flank.

The French president also cozies up to Russia, which seeks to benefit from tensions within the Atlantic alliance. In other words, Macron strengthens Moscow’s hands in Libya and the Eastern Mediterranean.

That European politicians cannot understand that pushing Turkey away from the Western alliance and the EU serves no party’s interest is beyond comprehension. It amounts to surrendering to narrow, selfish interests.

The French president, who berated a journalist for breaking the story about his secret meeting with a Hezbollah official in Lebanon, places at risk Europe’s strategic interests.

Is there no European leader left to confront Macron about his actions? Or would they prefer for Erdoğan to dress down his French counterpart?