The US ends in three years; what about the EU? 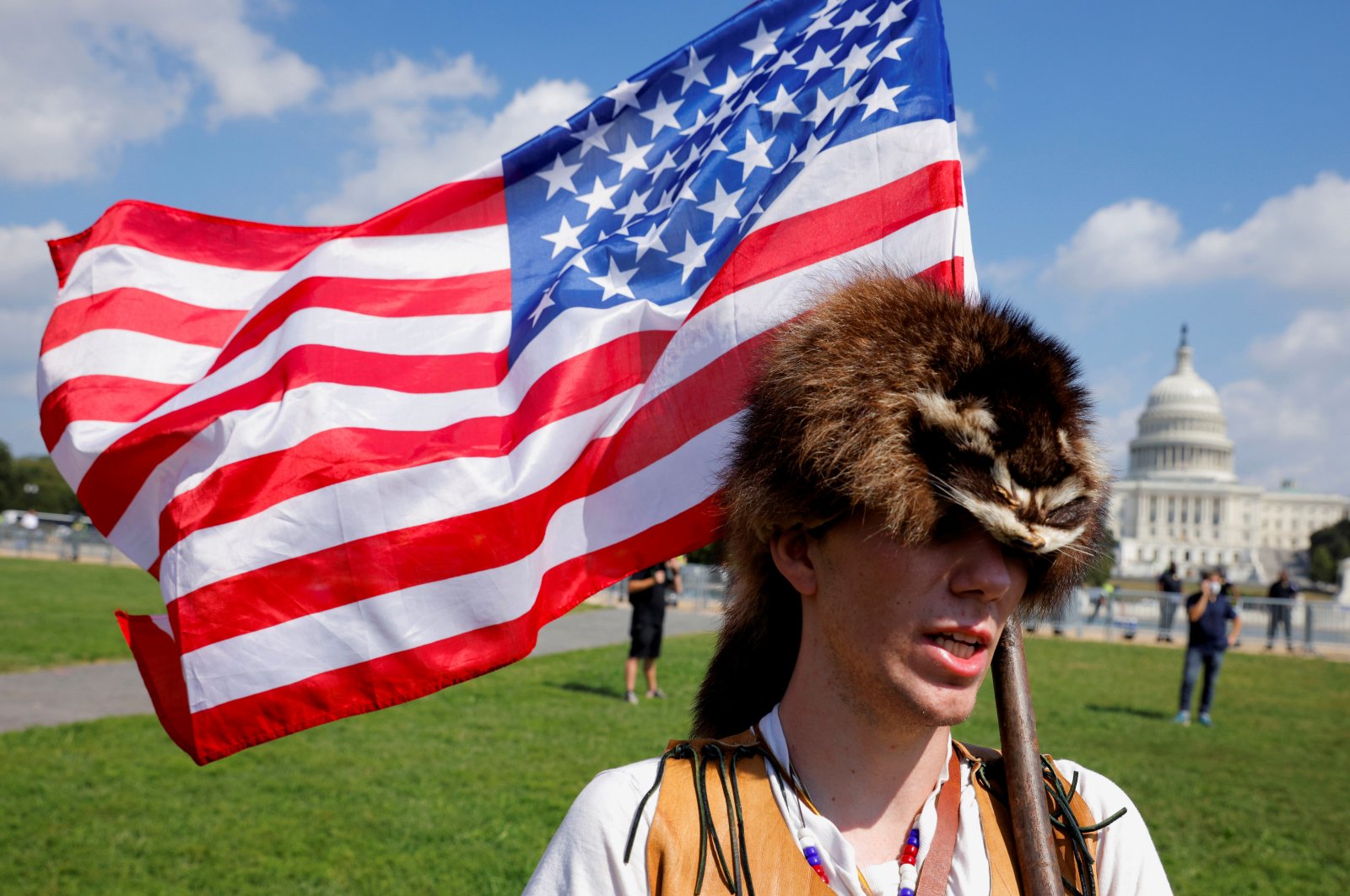 A man wearing a raccoon hat talks about his belief that former U.S. President Donald Trump won the election and that it was stolen from him through fraud, during a rally in support of defendants being prosecuted in the Jan. 6 attack on the Capitol, in Washington, D.C., U.S., Sept. 18, 2021. (REUTERS Photo)
by Hakkı Öcal Sep 20, 2021 12:05 am
RECOMMENDED

Despite the many contradictions he makes, such as the U.S. will end in three years while also preparing himself to run for election in three years, Donald Trump made a good point last week. He said: “Our country has gone really downhill in the last eight months like nobody’s ever seen before.” While he did not offer solid proof, he argued that the downhill trajectory will bring the country to its end.

'America is a laughingstock'

Trump also claimed that America has become “a laughingstock” to the rest of the world. I am not sure if everyone is laughing, but some people have grown the confidence to bark in America's face. Take the French Ministry of Foreign Affairs, for example. The mighty U.S. and the U.K. are creating a new alliance in the Indo-Pacific by signing an agreement with Australia to acquire nuclear submarines. The French Foreign Minister Jean-Yves Le Drian dares to reduce this security partnership for the Pacific region (dubbed Aukus, pronounced as “aw-kiss”) to a multi-billion dollar sale of submarines that will only anger China and serve as the first step in the U.S.-China war.

You cannot count the number of punches in a brawl, but Le Drian dealt a couple of heavy jabs at Aukus. He said he was “angry and bitter” over the move that breached the country's trust, adding that “This isn’t done between allies.”

The French minister forgets two recent facts about his own country's affairs: France pulled the same move in the Aegean Sea by signing military contracts with Greece without consulting its ally, Turkey, when the Turkish-Libyan maritime agreement to join their exclusive economic zones in the Mediterranean was signed. Also, France (and the whole European Union) was working on its own strategic alliance with Australia that encompassed building conventional submarines for Australia.

The U.S. and U.K. simply raised the stakes; the Europeans were expecting more cordial diplomatic relations with the U.S. after the Trump years, and were baffled by the "belligerent" move against China by the U.S and U.K. A senior EU official told CNN that “English-speaking countries, the same nations who took the lead in invading Afghanistan and Iraq – and we all know the results – are now acting against China.”

Apparently, China is not as anxious as Mr. Trump about the U.S.' early demise, though traditionally China has never missed an opportunity to confront the other's belligerence. As a matter of fact, the Chinese Foreign Ministry spokesperson accused the U.S., Australia and U.K. of “severely damaging regional peace and stability, intensifying an arms race, and damaging international nuclear non-proliferation efforts” with their pact, adding they would closely watch the situation’s development.

What is the situation really? Many people are aware that the Biden administration has adopted a one-dimensional worldview that it takes all political steps in accordance with. For instance, the $2 trillion investment in infrastructure and improvements in public services is aligned with the goal of strengthening the country to better compete with China.

President Biden sees foreign policy as a way to counter China’s rising power. He even left Afghanistan as the U.S. was being bogged down in the country and his hands were tied when it came to China. The COVID-19 pandemic and climate change couldn't even take precedence over China.

America’s China syndrome is nothing new, it is so deep-seated that the chair of the Joint Chiefs of Staff called his Chinese counterpart in the final months of the Trump administration to assure them that even if the president were to order an attack on China, the armed forces would not obey the command. This general was not fired after the scandalous revelation, because – God forbid – the Chinese take that to mean that if the president orders an attack on China that the U.S. armed forces would obey him!

It is not the reality of Chinese supremacy but more the perception of the threat that has people on either side of the aisle in Congress scared. Both the former and the current U.S. presidents share this fear, but their ways of coping with it appear different. Trump must have been talking about war to such an extent behind closed doors that the head of the Joints Chiefs of Staff felt the need to call the Chinese to assure them otherwise.

As a traditional democrat, Biden says the aim of his anti-China strategy is to promote democracy; but this, according to Trump, is not going to work and America will be completely destroyed before the next presidential elections. Trump might be right. Of course not about the total destruction of the U.S., but about the failure of Biden’s China policy. One or two nuclear submarines in the hands of Aukus will not stop China from increasing its influence abroad. Xi Jinping will not change his mind about building the world’s most powerful economy.

With or without Aukus, or French involvement, China is going to integrate into the global economic system, which in turn will usher in more political liberties. “More” in this context simply means “as much as the hybrid communism of China can take." Despite all the provocation coming from Europe and the U.S. in East Turkestan, have we witnessed any Tiananmen-like reactions from Chinese authorities? That is "political freedom" in China!

What about countries other than China?

But the U.S. fixation on China may be damaging many other aspects of the country's international relations. Israel, for instance, enjoying the American bulldog’s attention being fixated on the Eastern end of the yard, might take care of its own problem with Iran. Israeli (and U.S.) newspapers' exaggerations about the Institute for Science and International Security report, claiming that Iran is approaching an atomic milestone and is just a month away from gathering enough material for a nuclear weapon, has not generated the expected intensity in Washington. According to the Israeli media, this is because the Biden administration is “blinking on the issue.” What is the issue, you might ask?

According to Yonah Jeremy Bob of the Jerusalem Post, it is a “U.S., Iran, Israel nuke standoff.” Imagine this: President Ebrahim Raisi of Iran orders the Iranian atomic bombs be powered up, he has the button in his hand; on one side of his chair is the U.S. representative, on the other side sits a Scandinavian ambassador representing Israel, and in this nuclear standoff, the whole world is waiting, holding its breath. In just a few minutes Iran is going to wipe Israel off the face of the earth.

The reality is more like this: Iran agreed last Sunday to allow international inspectors to install new memory cards into surveillance cameras at its nuclear energy sites to continue filming there. When Israel paints such fictional pictures, it usually acts on its own to delay Iran readying a nuclear bomb through computer sabotage or “unexplained explosion in the facilities.” In Iraq, they actually bombed the site. The U.S., fearing an incident escalating into regional war in Iran, would usually interfere. Let’s hope Biden’s fixation with China doesn't end the U.S. soon.