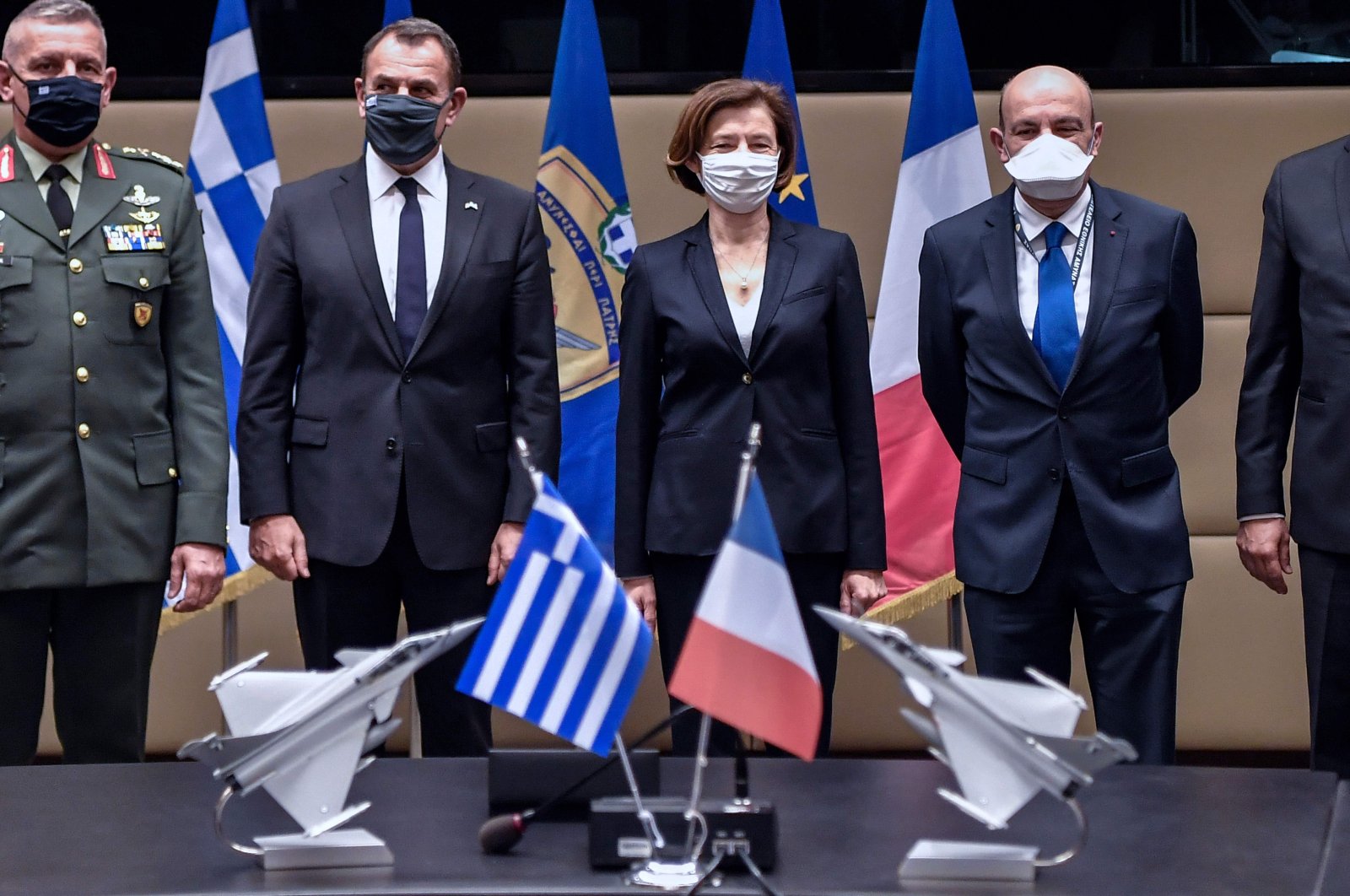 Greece, which has been using the tensions in the Aegean Sea and Eastern Mediterranean in recent years as a pretext, is using most of its national budget and aid coming from the European Union on arms and defense spending.

Most recently, Greece bought 18 Rafale jets from France under the guise of the legal right to defense and as part of initiatives to illegally militarise islands in the Aegean. This is being closely followed by Ankara.

Turkey last week issued a complaint to the United Nations, sending a letter that Greece’s acts violate the demilitarized status of the islands in the Aegean.

The letter that was sent to the U.N. Secretary-General Antonio Guterres and signed by Turkey’s U.N. representative Feridun Sinirlioğlu, stated, “We want you to note once again that Greece is not abiding by its obligations from relevant agreements on the demilitarisation of islands in the Aegean and Mediterranean.”

The letter underlined the proximity of the islands that include Kastellorizo (Megisti-Meis) to the Turkish mainland and continued to say that although the 1923 Lausanne and 1947 Paris Peace Agreements state clearly the demilitarization of the islands, Greece’s militarisation of the islands poses a significant threat to Turkey’s security. Furthermore, it was stated that tensions due to these violations could have ramifications on regional peace and security.

Saying that Turkey repeatedly brought up Greece’s violations through diplomatic channels, it added, “If Greece fails to fulfill its obligations from the agreements, it cannot put forth its sovereignty rights rooted in these agreements, including the demarcation of maritime zones.”

The letter further called on Greece to reestablish the demilitarized status of the relevant islands within the scope of cooperation and good neighborly relations.

Moreover, security sources similarly stated that the arms race in both the Eastern Mediterranean and the Aegean islands under the pretext of the legal right to defense as well as its recent acquisition of warplanes from France are the result of its maximalist and expansionist policies in the region.

Sources further indicate that threatening Turkey and trying to convince Ankara to give up its rights will not achieve any result and that this arms race will mostly harm the Greek people, who are in the midst of an economic meltdown.

By buying the French jets, Greece is spending almost all of its 5 billion euros defense budget on the purchase. Whether these were bought for defensive or offensive purposes remains a question. However, if the military capacities of Ankara and Athens are calculated, Greece’s claims seem far removed from mathematics and reality. Greece started an arms race against Turkey from the 1990s on. The technology of the Rafale jets it bought recently also dates back to the 1990s. The jet is a fourth-generation warplane that has similar features to the F-16.

Greece bought 18 Rafale jets that entered the inventory of the French air forces in 2006, and at least a dozen of the jets have already been used by Paris. It was announced that only six of these are actually new.

Considering that combat aircrafts are designed to have a general life of 6,000-8,000 hours of flight – which enables them to be in service for around 50 years – it is certain that Greece’s recently bought airplanes need modernization. It is understood that 12 Rafale jets that have undergone modernization will be sold to Greece by putting the Greek flag and nationality emblems on them. It is known that France did not add any capability to the planes.

It is estimated that the Rafale jets that were sold to Athens for more than 3 billion euros by France have been in use for 15 years and have consumed one-third of their life cycle.

Within this scope, security circles state that it is hard to believe that Greece bought these expensive planes solely for defensive purposes.

The latest Rafale order, which is a reflection of Greece's recent policies to increase tension against Turkey's call for peace and dialogue and constructive policies, does not match the realities of the Greek economy in this sense.

Greece has recently increased its defense spending and entered a major arms race. The Greek economy, which invested even the financial aid given to it by the EU to be used for infrastructure investments such as education, health, transportation and energy into its military instead, went bankrupt in 2008 and became an over-indebted state and the Greek people suffered.

Athens, which allocates 2.3% of its Gross National Product to the supply of weapon systems, also increased the period of compulsory military service from nine months to 12 months.

In light of all this data, Ankara thinks that Greece is trying to start a new arms race with Turkey. Instead of chasing after maximalist dreams that will not come true, it gives the message that Greece should seek dialogue with Turkey for a just solution in the Aegean, Eastern Mediterranean and Cyprus.

The message from Ankara to Athens from diplomatic and security circles is that good neighborly relations can be established not through an arms race with their neighbors, but through dialogue and negotiations for the resolution of problems through peaceful methods and in accordance with international law.

In this sense, it is underlined that Greece should give up arms races that can condemn its own people to poverty and deprive them of welfare and cease with provocative actions and rhetoric that can escalate tensions. Greece's current approach is one that feeds on the continuation of the problems, not the solution, and is uncompromising in its stance.