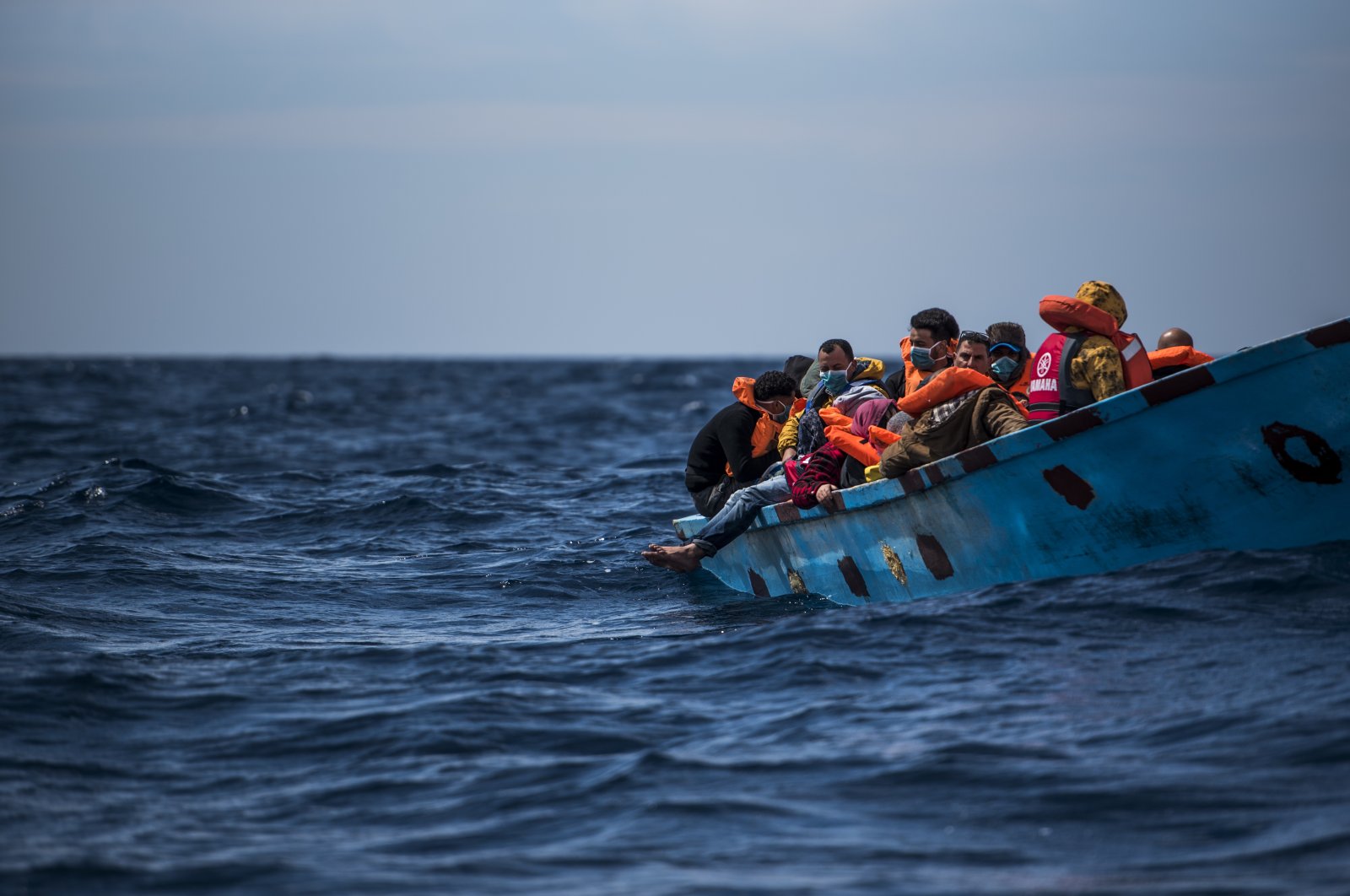 Before it was rescued by a nongovernmental organization in Barcelona, ​​Spain, a wooden boat with 38 migrants of various nationalities, the majority of whom were Libyans, bobs in the Malta Search and Rescue (SAR) Zone, March 27, 2021. (Photo by Getty Images)
by Hakkı Öcal Jun 07, 2021 12:05 am
RECOMMENDED

June is going to be a busy month internationally. First, Turkish President Recep Tayyip Erdoğan is going to meet with U.S. President Joe Biden on June 14. Biden will be on his first overseas trip for NATO and European Union meetings in the U.K. and Belgium.

The Erdoğan-Biden meeting will take place on the sidelines of the NATO summit in Brussels, which is not necessarily a good venue for discussing issues that have been a source of some serious tension between the countries.

Greece is not one of the invitees, and Greek Foreign Minister Nikos Dendias expressed his sorrow over Germany’s decision not to include his country in the upcoming Berlin Conference on Libya.

Dendias talked to Jan Kubis, the U.N. secretary-general’s special envoy for Libya. Dendias said they discussed the issue of Libyan refugees and cooperation. Presumably, the U.N. official must have asked for assurances from Dendias that the Greek coast guard will be more careful with their bayonets when they are pushing African refugees back to the seas, endangering the lives of children, women and men on those flimsy rubber boats.

A Turkish fisherman or coast guard cannot be there to rescue those refugees from the sea when their rights are violated by the Greek and EU border protection agency, Frontex, naval elements. The Greek and Frontex forces not only unlawfully block the boats’ way, but they occasionally puncture the boats.

The main focus of the second Berlin Conference on Libya will be on general elections and the removal of foreign forces from the war-weary country. The refugee issue is not going to be on the agenda. Perhaps that’s the reason Greece was not invited to Berlin.

A drama, a reflection

The Libyan drama is the darkest chapter of the Arab Spring fiasco. The smallest impact of the disappearance of national unity and government authority in Libya is the question of the ever-increasing African refugee problem. Instead, the civil war, the actual dismemberment of the country and many other regional issues stemming from the Libyan issue are a source of international discord among the African people and Muslim nations.

Now 10 years later, Libya is still a disaster but the time for a solution appears to be at hand. The Berlin Conference brought the sides of the two different regimes to an election that, hopefully, will produce national unity under the U.N.-recognized Government of National Accord (GNA).

But still, why did the Western powers decide to create this disaster in Libya in the first place? The apparent reason for the U.S./U.N. war in Libya was Moammar Gadhafi's killing of his own people.

Former U.S. Secretary of State Hillary Clinton once said, “If you don’t get him out and if you don’t support the opposition and he stays in power, there’s no telling what he will do.”

Later, the U.S. organized a hanging party (this time they used machine guns, not a noose), transmitting it live on television, and killed the deposed leader Gadhafi. Clinton screamed to the world, “We came, we saw, he died.”

Years later, former U.S. President Barack Obama would admit that the Libyan war had been the “worst mistake” of his presidency. He further accepted the fact that the U.S. didn’t fully understand how fractious Libyan society really was.

Therefore, the U.S. replaced Gadhafi by protecting one tribe and killing the other, supporting one terrorist group one day and fighting the other the next. The U.S. military strategy, developed and implemented in three short days, eliminated Gadhafi but provided no alternatives for the post-Gadhafi era.

Under the watchful eyes of Clinton and then-Turkish Foreign Minister, and later Prime Minister, Ahmet Davutoğlu, Libya turned into a hub for human trafficking and human slavery.

The U.S. and its allies perhaps had not willingly allowed or gotten involved in such crimes but their man, warlord Khalifa Haftar, would have ruined the U.N.’s resuscitation plan for Libya had the Turkish military alliance with the GNA not saved the country.

The GNA also signed a maritime boundary treaty to establish a joint exclusive economic zone (EEZ) in the Mediterranean. The two countries now claim the rights to sea bed resources.

The Berlin Conference will focus on preparations for national elections planned for Dec. 24. During the first round of the U.N.-sponsored talks in January 2020, an election calendar was set up, but the warring parties could not reach a formal truce until October of that year.

Finally, the creation of an interim government began the difficult task of unifying Libya and preparing for the December 2021 polls.

Now the daunting task of reviving a nation that the U.S. single-handedly brought to the brink of total collapse requires the removal of 20,000-plus mercenaries and foreign troops from Libya.

The eastern half of the country that Haftar controls should be linked to the western half by opening the roads.

Greece might deserve a seat in Berlin if it had stopped courting Haftar – who, if he had won, would have stricken the maritime boundary treaty with Turkey – and started helping the open-heart massage Libya needs.