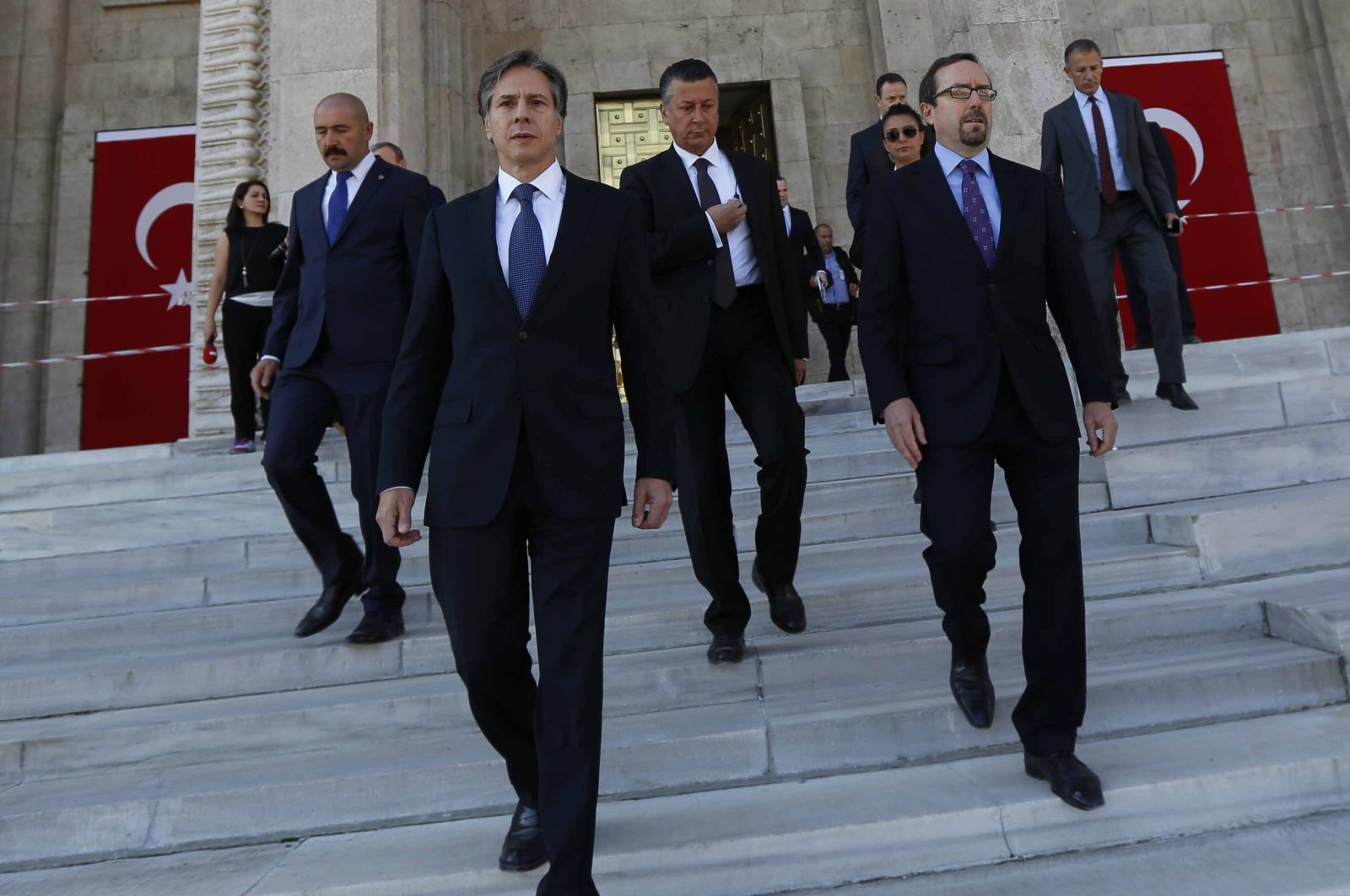 Then-U.S. Deputy Secretary of State Antony Blinken (Center L), accompanied by then-U.S. Ambassador to Ankara John Bass (R), leaves the Turkish Parliament after observing the damaged parts of the building due to the bombing of the Gülenist Terror Group (FETÖ) coup plotters on the night of the July 15 failed coup attempt, Ankara, Turkey, Sept. 27, 2016. (Photo by Ali Ekeyılmaz)
by Hilal Kaplan Nov 27, 2020 12:05 am
RECOMMENDED

Do you remember that British Prime Minister Boris Johnson once won the competition for writing the most offensive poem about President Recep Tayyip Erdoğan? Less than a year later, however, he found himself as a foreign secretary and came to express his eagerness to work with the Erdoğan administration.

In addition, Johnson, a partner in the thesis “Turks will invade Europe,” one of the most basic arguments of Brexit, declared during his first visit to Ankara as a minister that they would support Turkey's efforts for European Union accession. It is more important to predict and analyze the actions of politicians without paying attention to their remarks.

I am of the opinion that we need to assess U.S. President-elect Joe Biden and Anthony Blinken, who is expected to be nominated as secretary of state, from a similar point of view. Biden's declaration in an interview with The New York Times one year ago that he would support the opposition to overthrow Erdoğan in the election was not only a blunder in terms of admitting that he would interfere in Turkey's elections, but also an arrogant attitude that no NATO member has adopted against the leader of an allied nation. We will all see Biden taking a much softer tone in his first meeting with Erdoğan, a president who, like himself, was elected through democratic means.

So, I would like to focus more on Blinken's views on Turkey today. I think his adept perspective and diplomatic tone will determine the tone of future relations. On all occasions, Blinken highlights the importance of Turkey, which has the second-largest army in NATO. However, the main topics that strain the NATO alliance, such as the purchase of the Russian S-400 missiles and the exclusion of Turkey from the F-35 project in violation of international law, are still unresolved.

Also, we can predict that Turkey-U.S. relations on Syria will enter a very tense phase. Blinken, despite all objections by Turkey, advocated arming and supporting the YPG, the Syrian offshoot of the PKK terrorist group. He turned a deaf ear to the border security concerns of Ankara, the only NATO member that fights Daesh on the ground, and also objected to U.S. President Donald Trump’s decision to withdraw from Syria.

Another point of divergence in Turkey-U.S. relations will be Cyprus. As the struggle for energy exploration in the Eastern Mediterranean escalates, the importance attached to Cyprus is increasing. Under the Trump administration, the U.S. lifted its arms embargo on Southern Cyprus, making it clear that it was taking up a stance against Turkey.

However, after the 2004 referendum, the Greek Cyprus administration was made a member of the EU, despite its rejection of the olive branch extended by the Turkish Republic of Northern Cyprus (TRNC) for a federal solution. Then in 2017, at the Crans-Montana meetings, the negotiations remained inconclusive again, as the Greek Cypriots gave a maximalist ultimatum with zero concessions. However, despite this, Blinken opposes a two-state solution in Cyprus.

On the other hand, we know that Blinken has a more sensitive approach to the July 15 coup attempt of the Gülenist Terror Group (FETÖ) than Biden, who had said, “We couldn't understand if it was an internet game, if it was serious, when it happened.” Blinken, who started his visit to Turkey by visiting the Parliament bombed by Gülenists, said, “People around the world need to know that this attack is a dagger in the heart of democracy in Turkey.”

Of course, feelings are not enough to change the fact that Fetullah Gülen, the mastermind of the deadly coup, has lived freely in Pennsylvania for 20 years and led FETÖ from there. In other words, the U.S. “aiding and abetting” Gülen will remain a problem in relations that could not be solved in the four to five years since the coup.

As you can see, a challenging four-year period is beginning in Turkey-U.S. relations. The U.S. will either accept the importance of Turkey as a NATO ally not just with words but by deeds and seek a happy medium accordingly. Or, Washington will continue to regard it as a country that it needs to "contain" and surround, like Russia, and push Turkey to further increase cooperation with Moscow, as in Syria and Azerbaijan.