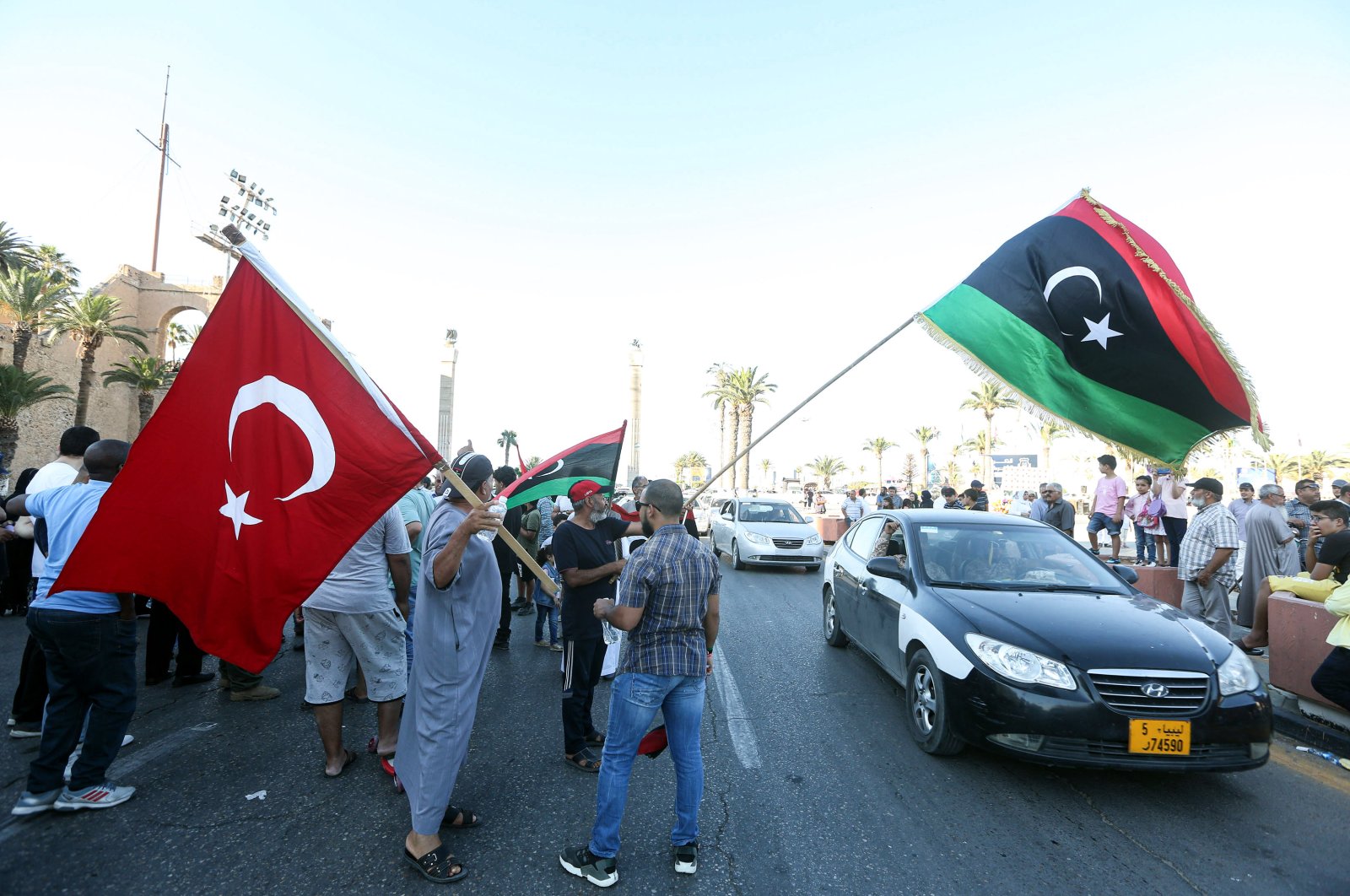 People wave flags of Libya and Turkey during a demonstration in the Martyrs' Square in the center of the Libyan capital Tripoli, currently held by the U.N.-recognized Government of National Accord (GNA), June 21, 2020. (AFP Photo)
by Nagehan Alçı Jun 27, 2020 12:05 am
RECOMMENDED

In Libya, the tension is rising as the putschist Gen. Khalifa Haftar continues to threaten the country’s internationally recognized government, the Government of National Accord (GNA). As a counter-move last Thursday, Prime Minister Fayez Sarraj’s GNA demanded Haftar’s forces withdraw from Sirte and Jufra provinces as a precondition for talks.
Turkey is the key player here. With Ankara’s help, GNA forces have gained position and reversed a 14-month offensive on capital Tripoli by Haftar’s men. Haftar is backed by Egypt as well as by Russia and the United Arab Emirates (UAE). Not only them but also France supported the warlord. It is actually his international support which keeps him still as a player in Libya. However, his power is diminishing with Turkey continuously helping the U.N.-backed GNA.
Now with Egypt’s leader Abdel Fattah el-Sissi threatening to intervene if Sarraj does not back off from the coastal areas the civil war seems to get even tenser.
Libya has been struggling with civil war since Moammar Gadhafi’s death in 2011. The country’s new government was founded in 2015 under a U.N. agreement but unfortunately, there is no political settlement reached yet. Haftar forces’ military offensive made the country experience bloodshed and there is still no stability and agreement reached on a solution.
Haftar seems to be panicking. His spokesperson Ahmed al-Mismari claimed that the GNA is going to take the pyramids. That absurd idea shows on one hand his approval of the GNA’s victory and on the other hand a loss of his superiority over Sarraj.
This change could happen largely due to the presence of Turkey’s state-of-the-art Bayraktar drones which changed the course of the war. With the help of the Turkish military’s support, the GNA was able to move from being defensive to being an offensive and reclaimed territory and key strategic assets like al-Watiya air base.
There are talks going on between the GNA and Ankara about the possible use of the al-Watiya base as well as the naval base at Misrata which will open Turkey to establish a more permanent military footprint in the region.
Turkey’s Libyan strategy gave the country a big advantage to energy exploration in the Mediterranean. So on one hand the legal Libyan government is on a stronger footing now and the country is closer to a political settlement and on the other hand, Turkey gains position in the Mediterranean waters with its decision in Libya.
This definitely seems to be a win-win strategy.