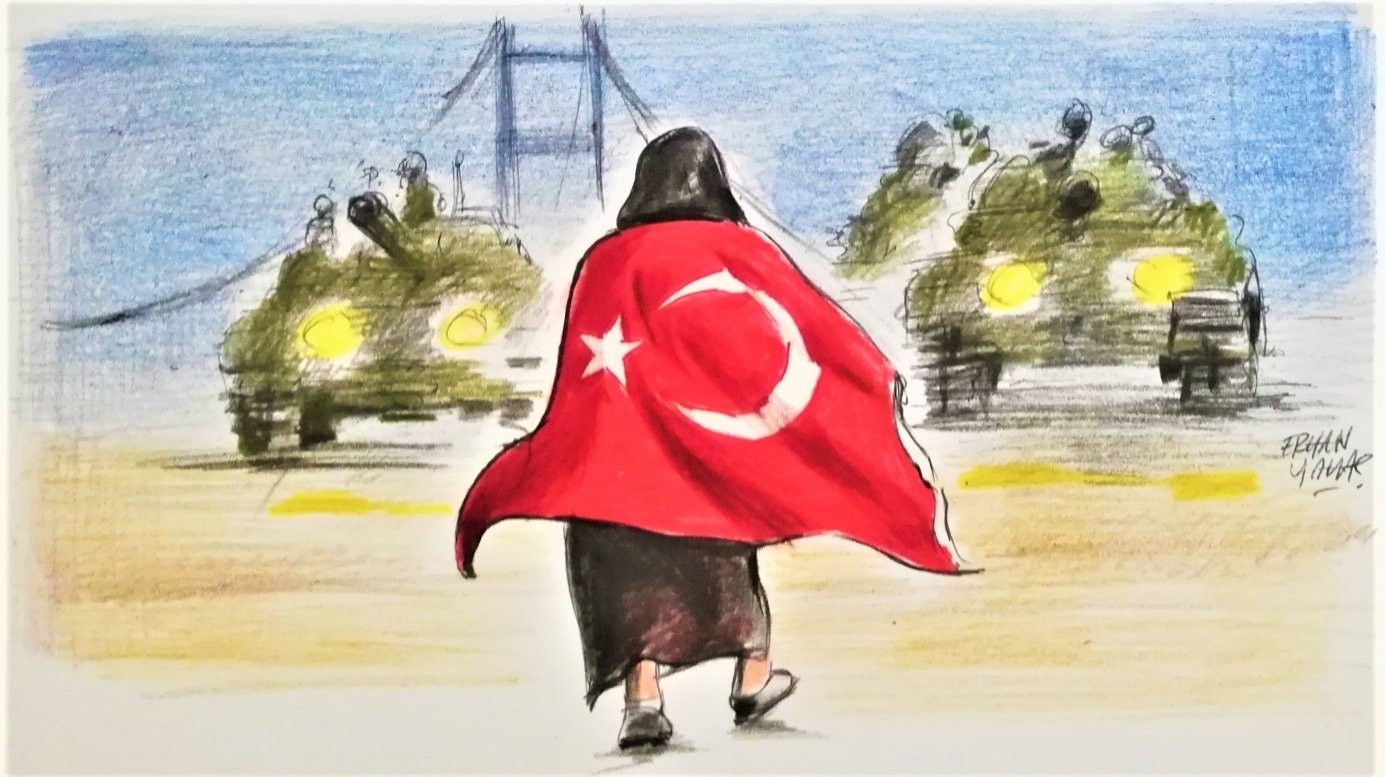 Illustration by Erhan Yalvaç shows an iconic moment of the July 15 coup attempt when a woman walks against the tanks of the coup plotters, in the background of Istanbul's July 15 Martyrs Bridge.
by Burhanettin Duran
Jul 17, 2021 12:05 am

Turkey marked the fifth anniversary of the July 15 coup attempt and relived that night – the night when the Turkish people made history. That night, which instantly became a turning point in the history of our democracy, consisted of two significant parts.

The first part was about the coup plotters, who were members of the Gülenist Terror Group (FETÖ), who revealed their treason, and attempted to occupy and start a civil war in Turkey. Tanks appeared on the Bosporus Bridge, as rogue jets bombed the Turkish Parliament and traitors murdered 251 innocent people in cold blood.

Millions of heroes, who answered President Recep Tayyip Erdoğan’s call to defend the republic, their homeland and their free will, made their mark on the second part of July 15, 2016. It was a blessed night, and a bright morning, that belonged to those champions that stopped tanks with their bare hands and ran in the direction of bullets.

July 15 also belonged to those people, who peacefully resisted all types of coup plots and objected to all forms of domestic and foreign tutelage, by participating in the democracy watch.

Finally, it belonged to those folks, who love Turkey dearly and defended their nation’s independence.

The spirit of July 15 is embodied in that common resistance and sense of resurrection. It was that spirit, which ushered in a new era for Turkey’s domestic and foreign policy. For the sake of our independence, democracy and Republic, we must always keep it alive.

What the Western governments, which called for “calm” during the attempted coup, really meant was not lost on the Turkish people. They noted the attitude of Turkey’s “allies” – namely their failure to object to the coup and support democracy – at that difficult time. In the end, the people understood that they had to take care of their own business. They grasped that there was no option, except to strengthen Turkey’s position in the international arena.

That newfound political consciousness will remain the main cornerstone of political life.

In this regard, Erdoğan did the right thing by criticizing attempts to “downplay” the July 15 coup attempt: “Our nation made history on July 15. Yet that story was not just about thwarting a coup attempt. That night, our nation resurrected its will – which was there in Manzikert (Malazgirt) in 1071, in Istanbul in 1453, and in Gallipoli (Gelibolu) in 1915 – for the sake of their homeland, flag, future and independence.”

There is no reason for the opposition to be unsettled by that will. Governments come and go, but that will alone, can keep our Republic, democracy and state safe. As such, we must not allow anyone to undermine it.

The main opposition Republican People's Party (CHP) Chairperson Kemal Kılıçdaroğlu, too, talks about two sides of July 15 – that “one part belongs to the people, and the other belongs to the palace.” This approach is ultimately detrimental to Turkish democracy since it equates the coup plotters with the coup’s opponents.

Kılıçdaroğlu’s references to a “controlled” or “civilian” coup, too, do not amount to a critique of the fight against terrorism. Unfortunately, the main opposition leader recites FETÖ’s own talking points in order to criticize the post-July 15 period when coup plotters appeared before the courts for the first time.

Indeed, if Kılıçdaroğlu wants to discover the two sides of July 15, 2016, he is welcome to focus on that night: There were coup plotters and Gülenists, whom certain people hoped to use to take Turkey hostage. On the other side, there was the real July 15 – a victory for democracy. That was the path of martyrs, which, Erdoğan said during the opening ceremony of the Democracy Museum, he envied.

It was the feeling of “sacrificing one’s life for one’s homeland,” which he saw in the eyes of hundreds of thousands of people, who rushed to the Atatürk Airport that night.