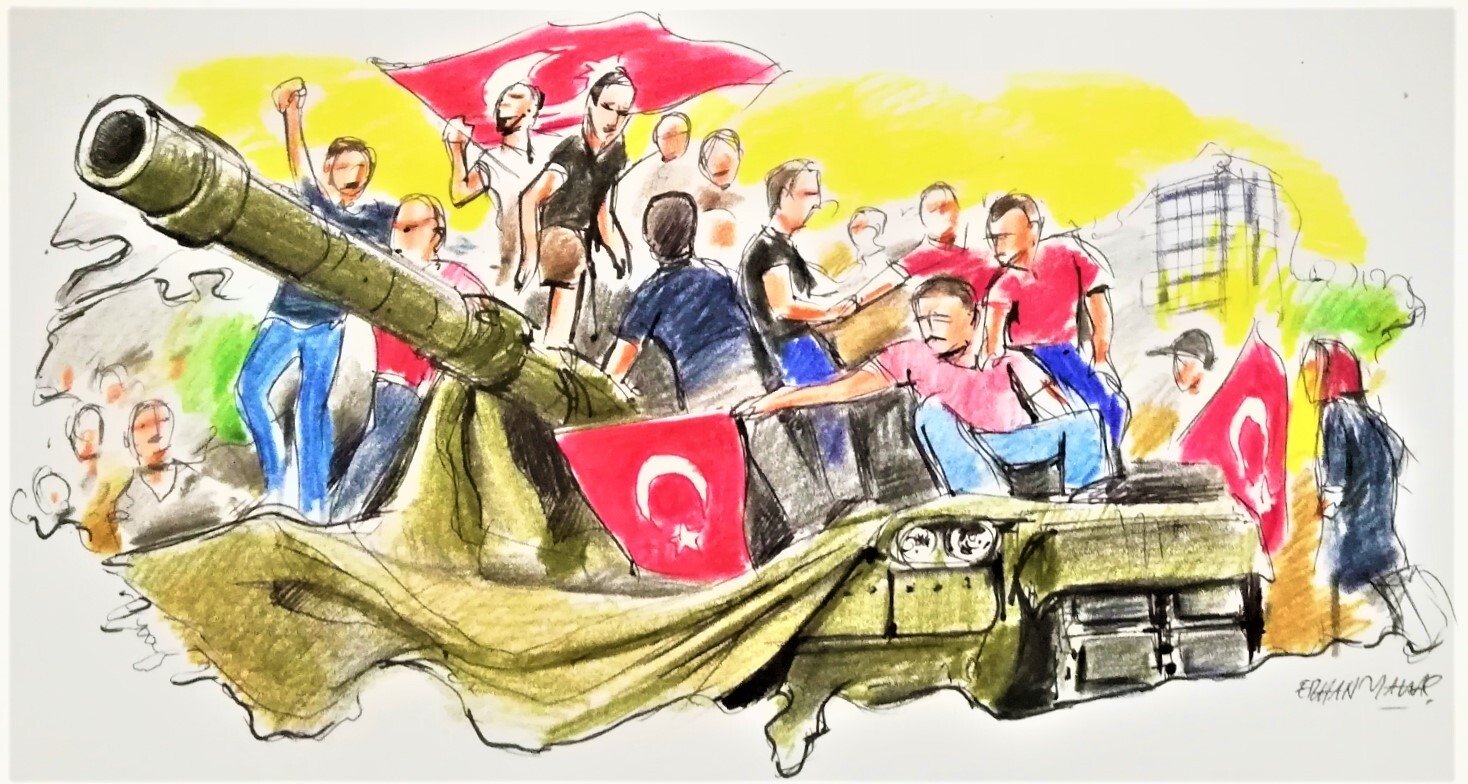 Illustration by Erhan Yalvaç shows the Turkish people resisting against coup plotters on July 15, 2016, to defend their country and democracy.
by Burhanettin Duran Jul 14, 2021 3:40 pm
RECOMMENDED

Five years have passed since the inauspicious coup attempt in Turkey. That fateful night is when the Turkish people took charge of their future, too. Many events will take place this week to tell the epic story of a glorious nation, which stopped tanks with their bare hands.

Talking about the night of July 15, 2016, and its aftermath must be an indispensable part of our socialization and shared memory. We must never forget that the people who answered President Recep Tayyip Erdoğan’s call to storm public squares to oppose coup plotters who were attempting to drag Turkey into chaos and occupation.

We must not shy away from proudly remembering the epic of July 15 and its exceptional place in the history of our democracy. Let us remember the sacrifice of our martyrs and veterans, who stopped our beautiful country from turning into Syria, with gratitude.

Let us blend the vigilance of the "democracy watch" with the sense of "social contract" in the spirit of Yenikapı.

Let us celebrate our unforgettable heroes as a tradition, yet with permanent passion. Let us remember it as a symbol of our nationhood and our defense of democracy, together with our state.

In retrospect, everyone knows that the July 15, 2016 coup attempt targeted the nation’s will, the Parliament as its representative, and Erdoğan.

The purpose of the Gülenist Terror Group (FETÖ), which served foreign powers, was to stop Turkey in its tracks. It is no secret that Turkey’s attempt to elevate its international standing has unsettled many nations. Those parties attempted to fuel turbulence, at home and abroad, starting in 2013.

Turkey not only thwarted those attempts but also took crucial steps in Syria, Iraq, Libya and the Eastern Mediterranean. It fought actively against terrorist groups like Daesh, the PKK and FETÖ, and consolidated its international role through a proactive foreign policy.

Taking stock of the past five years, we must note that Turkey accomplished many things in the fight against FETÖ and coup plotters, but our work is not yet done.

That FETÖ’s ringleader continues to live comfortably in Pennsylvania shows that his organization remains a useful tool for foreign intelligence services.

That the Western governments, which could not bring themselves to support democracy on July 15, continue to harbor FETÖ operatives signals that the road ahead is still long.

Today, that organization hopes to find fresh opportunities to create a “parallel state” after the 2023 elections.

Erdoğan’s most recent address to the people of the southeastern province of Diyarbakır suggests that Turkey could still encounter “major challenges.”

In other words, Turkey has not yet consolidated its new international position beyond the point of no return.

To accomplish that goal, Turkey must be governed in line with the spirit of Yenikapı for years to come.

We must promote a sense of citizenship, so that coup plotters are held accountable and there is no room for coups in our nation’s future in any way, shape or form.

Please do not mistake my warnings for fueling fears about Turkey’s survival.

Democracies can address such concerns if they learn from past mistakes.

Unfortunately, the main opposition party betrayed the spirit of Yenikapı by referring to the fight against the coup plotters as a “controlled” or “civilian” coup.

Main opposition Republican People’s Party (CHP) politicians won’t be able to absolve themselves until they apologize.