When the American dream becomes an American nightmare 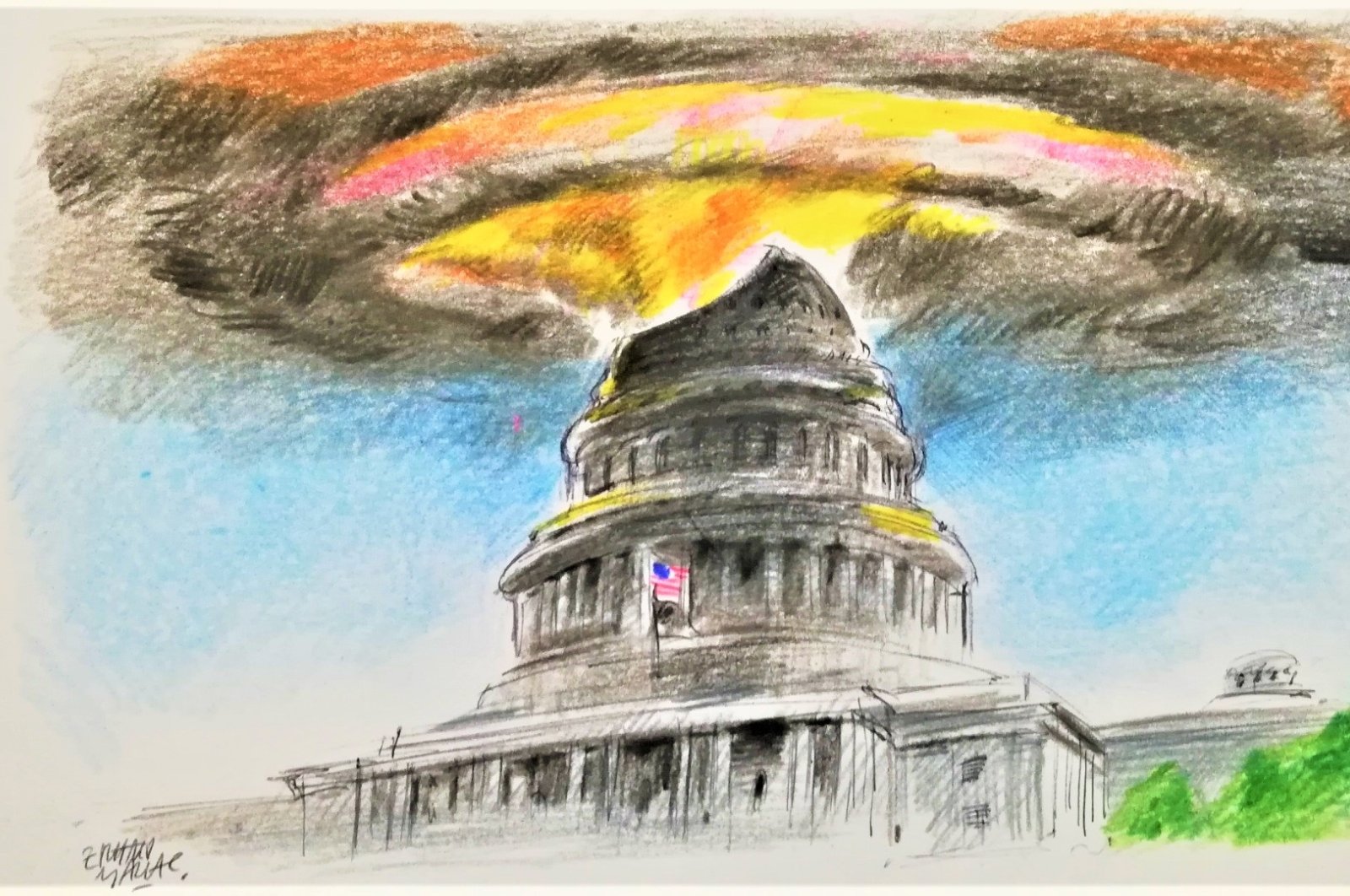 Jan. 6, 2021. What a day. Hours before U.S. Congress confirmed that President-elect Joe Biden won the election, thousands of supporters of President Donald Trump, who continues voter fraud claims, walked to the U.S. Capitol. The demonstrations soon escalated into a violent riot, shocking the whole world.

“We will never give up, we will never concede,” Trump told the attendees gathered outside the White House earlier the day, repeating his claims: “They cheated in the elections. They cheated like hell.”

The crowd, who listened to pop songs, danced and cheered Trump on during the organized protest, later broke into the building, running amok in the Senate and chanting in the chamber, accustomed to more quiet sessions.

Both Confederate and American flags were waved. Looking at the photos, the U.S. Capitol looked more like a madhouse. The American dream had all of a sudden been replaced by American carnage.

But who were these people really? According to some, a mob, but according to themselves, "patriots." Twitter users proclaimed the group was trying to overturn the election results, disregarding the U.S. democracy. However, many reports identified the woman, one of four who died during the clashes, as a U.S. air force veteran from San Diego.

Even though Trump said there would be an "orderly transition on Jan. 20," what needed to be done had been done when Congress concluded the electoral vote count, certifying Biden's victory.

Trump still insists there was voter fraud, something 80% of his voters believe, according to polls. There is no need to point to the fact that 74 million Americans voted for him in the elections.

Everyone agrees that the 2020 presidential race was one of the tensest elections in U.S. history. Some even compare it to the 1864 presidential election when incumbent President Abraham Lincoln of the National Union Party defeated the Democratic nominee, former Gen. George B. McClellan in the midst of the American Civil War.

The fact that parallels are being drawn between an election taking place in the 21st century in a democratic country and another during the Civil War-era shows how far the U.S. has been pushed to the edge.

On Jan. 6, over 200 years after the U.S. Capitol was breached and burned down by the British in 1814 during the War of 1812, it was occupied again but this time by its own citizens. Yet again, we watched events unfold, conscious of the fact we were witnessing a historical turning point in U.S. democracy.

During the campaign period, both Democrats and Republicans, who turned the 2020 elections into more of a referendum on the future of the U.S. parties, argued that they "loved America more" and would "put America first," stressing that the nation would be destroyed if it fell into their opponent's hands.

While the Biden camp accused Trump of being fascist and racist, Trump called the Democrats socialists and communists. Election promises were not focused on how they would serve Americans or what they would do for the people when they were elected.

The candidates went as far as to defame, attack and insult their rival's supporters. The growing partisanship and polarization in the U.S. today can be largely blamed on the language used by politicians. The rival parties are polarizing society; it is not happening by itself.

Unfortunately, partisanship only increases when one party considers itself to be patriotic and its opponents to be traitors. When destroying the other side becomes the ultimate goal, it is fair to say democracy is on the brink of collapse.

Imagine if the same thing were to happen in another country, for example, Turkey. Washington would undoubtedly release a statement expressing its deep concern for the country's democracy, stressing that polarization has reached dangerous levels.

If Turkey were to have similar election results, the U.S. would urge the country to try and understand the other half of the population. More importantly, if there were allegations of electoral fraud, they would warn the nation to respect the rule of law.

Imagine if the Jan. 6 riots happened elsewhere in the world. Ironically, nearly every country delivered Washington the same advice they would expect to receive if the tables were turned.

It had to have been an embarrassing moment for the proud American policymakers who are addicted to preaching democracy to the world and are usually the ones to decide whether a protest is considered peaceful or not, telling nations to respect human rights no matter how violent the events escalate to be.

Was it a coup attempt as the Democrats said? Was it an attack on U.S. democracy? It was an odd feeling reading the tweets of the same Americans who applauded the July 15, 2016, coup attempt by the Gülenist Terror Group (FETÖ), chanting when the Turkish Parliament was bombed.

Over the last year, the pro-Biden U.S. mainstream media and social media have rightfully provided a platform to protestors fighting racial injustice and police brutality, mostly ignoring the riots and violence. But in doing so, they have used these demonstrations as a tool to portray Trump supporters as racist, illiterate, intolerant people.

Now, they have the license to call those who entered the Capitol fascists and criminals. But how can the rest of the 74 million Americans who weren't there to support Trump be racist?

Lumping everyone into the white supremacist category shows that the Democrats do not care about those who may have voted for Trump for other reasons, including those without a university education who are more susceptible to becoming cogs in a globalized machine.

Blue-collar workers are losing their jobs every day across the U.S. and lack the specialized skills needed to apply for more technical positions. Trump's "Make America Great Again" slogan strikes a chord with them as does his position opposing manufacturing being moved overseas to countries like China.

When the Democrats talk about “climate change,” they steal the hearts of environmentalists but lose the blue-collar workers such as coal miners. When asked, these workers say: “The Democrats want to make the world a better place while turning our lives into a mess.” To which environmentalists shockingly retort: “You can’t make an omelet without breaking eggs.”

Unless this "democratic despotism" changes, Biden's promises to be a president for all Americans are just empty words. Trumpism is not going anywhere even though Trump has accepted that it is time to concede.

On the other hand, if Trump keeps up the fighting, only a darker future lays in store for the U.S. In fact, he may have already left a hint: “While this represents the end of the greatest first term in presidential history, it’s only the beginning of our fight to Make America Great Again.” We will continue to follow the events in the U.S. with deep concern.