Who wants to buy Manu’s submarines? 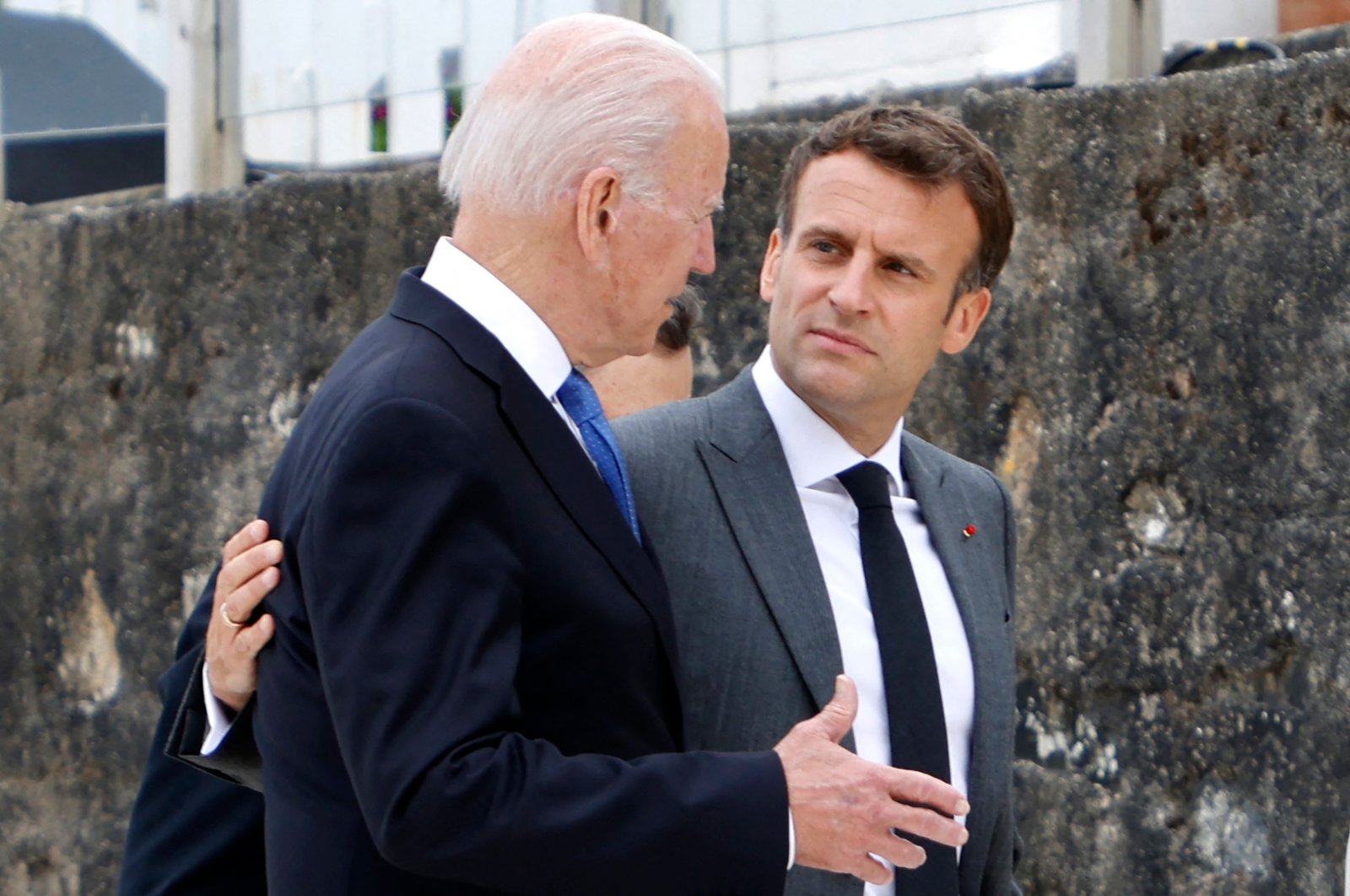 United States President Biden has opened not one, not two, but three Pandora’s boxes:

He kicked French President Emmanuel Macron out of the Western world's future alliance plans, pocketing $60 billion that was going to go to Paris. He also opened old wounds between former rivals France and Great Britain.

If Germany's outgoing Chancellor Angela Merkel were still at the helm of another historical French rival, Macron would run to Berlin to lay his head on her shoulder and cry in search of solace. Unfortunately, she is no longer taking calls and the man likely to replace her does not intend to get into a row with the new head of the Western world.

The Daily Telegraph of London belabored that Macron may give up France's seat at the U.N. Security Council (UNSC), offering the place to Ursula von der Leyen, a German politician and president of the European Commission, who appears to be the most interested in Europe and promises not to get lost in the shuffle amongst the U.S., Russia and China. Europeans are very comfortable like that, thank you very much.

Besides, the French Foreign Ministry vehemently denied the British newspaper's claims. France offering up its UNSC seat, which it was given as a rake-off for the torture it suffered at the hands of Germany in WWII, proves that an internal reformation of the U.N. system is truly urgent. But that is not the point right now. The point is AUKUS, the new alliance between the U.S., Britain and Australia, which is rerouting $60 billion of the Australian people from Paris to London and Washington. France was only a day away from signing the deal with the Aussies.

Why did Biden not include France in his new Indo-Pacific alliance against China? Biden called the French president and “smoothed things over,” according to U.S. media reports right after the French foreign minister declared that the alliance was “a genesis of what we have witnessed in Afghanistan.” The U.S. media, in unison, called it “a spat” and reported that it had “simmered down” after Biden’s call to Macron. The French media, on the other hand, acknowledged that the U.S. recognized the need for stronger European defense to complement the NATO military alliance, a key idea repeatedly floated by Macron. But Biden was smiling during the call and he did not use the word “apology” in any shape or form.

Asked if Biden had apologized to Macron, White House press secretary Jen Psaki said, “He acknowledged there could have been greater consultation.” So, things may have simmered, or maybe not. Anyhow, how much of the diverted Aussie dollars could go back to France, if any at all, will be determined soon. Is it really that important for France to get other EU members behind it in this “spat” to yield its seat at the UNSC? Perhaps not for France, but it is for Macron personally as elections are scheduled for April 10, 2022, and this time he is not as comfortable as he was in 2017.

This time, the owners of the votes he had stolen from the right and left are strongly reclaiming their electors. Macron had advertised himself as a candidate for both sides, but today he has nothing to offer that proves he deserved those votes. He tried to form an alliance in the Eastern Mediterranean to drill and pump oil and natural gas, but it turned to be impossible without Turkey; he tried to egg on Greece against Turkey, but it was later understood that Greece would only benefit if France would provide enough credit. Maybe Macron has enough money to do that, but the British had them cut off from the Australian deal. Back to square one! What could poor Manu do? He was planning to sell 12 conventional submarines to a country that has not waged war on its own against anyone since it gained its independence in 1901. Biden had a better plan for the Aussies: “join in our alliance against the Chinese, we’ll throw in the nuclear boilers for free.”

Even if the most significant rift in decades between the U.S. and France seems mended and France remains at its seat at the UNSC, it has picked the scab off the old wound. Professor Ali Demirdaş, in his article in National Interest magazine, says Europe increasingly resembles its pre-1939 self. He notes that France recalling its ambassadors from Canberra and Washington is a first in the history of the long alliance between France and the U.S. since 1778. But professor Demirdaş says the French reaction to AUKUS may not trigger wider conflict in Eurasia, we have to wait and see. However, he highlights that the real motivation behind the deal was London’s aspiration to ascend in the great power competition. “After all,” Demirdaş writes, “British Prime Minister Boris Johnson promoted Britain’s departure from the European Union as an opportunity for the country to strike more global strategic deals unrestrained by the EU.”

Now we see how these “global strategic deals” are going to reshape the global geopolitical order; and in this conglomeration, France is a very small player. Behind this, lies not a simple military deal but a new diagenesis of the "Third World War," unless Xi Jinping – the paramount leader of China, the country's most prominent political leader since 2012 – buckles when he sees the 12 nuclear submarines the Aussies bought.

What is Xi doing?

Xi has been rising through the political ranks since he was governor of the coastal regions. Following the dismissal of the party secretary of Shanghai, Xi replaced him in 2007. He subsequently joined the Politburo Standing Committee and served as the first secretary of the Central Secretariat. In 2008 he was designated as the successor to the paramount leader and appointed as general secretary in 2012. In 2018, he abolished presidential term limits and introduced far-ranging measures to fight corruption. He enacted a more assertive foreign policy with regards to Japan, Africa and Eurasian countries with his Belt and Road Initiative (BRI).

Yes, Boris Johnson’s post-Brexit policies are in concert with Biden’s own ambitions regarding Russia and China; but neither of them will be able to stop Xi’s Indo-Pacific trade routes. Boris does not seem to be looking at the data closely lately: after the U.S. and Germany, it is China who is Great Britain's best trade partner. China has invaded Europe and Eurasia without firing a single shot. Nuclear or traditional, no submarines are going to stop China from becoming the richest country in the world. Can Xi convert this supremacy into any political clout?

It is no secret that while the world was busy combating COVID-19, China continued to build and fortify its islands in the South China Sea. As part of its bid to expand its influence across the world, China is not hiding its political or military ambitions. What China is doing was dubbed a “war without gunsmoke strategy” by Andrew S. Erickson and Ryan D. Martinson, the editors of a book titled “China's Maritime Gray Zone Operations” three years ago. In challenging China’s claims in the South China Sea, the U.S. Navy is getting more assertive and AUKUS is only part of what the U.S. is preparing for. However, for China's business partners in other parts of the world are aware a "full normalization" has yet to take place as China is contesting this area in the South China Sea. The region includes the Paracel Islands, the Spratly Islands and various other areas, including China's large-scale reclamation project the "Great Wall of Sand." This is not a new situation, and neither the creation of AUKUS or any stronger, more conspicuously belligerent alliance will stop the people of the world from benefiting from trade and manufacturing with China. Quite the contrary, they will readily accuse the capitalists of the world of countering the economic development of a non-capitalistic country through military buildup.

Who is going to say this to Biden’s face? Not oxy-Macron. He is busy selling 12 conventional submarines at discount prices. Any takers?