A decade of human catastrophe in Syria 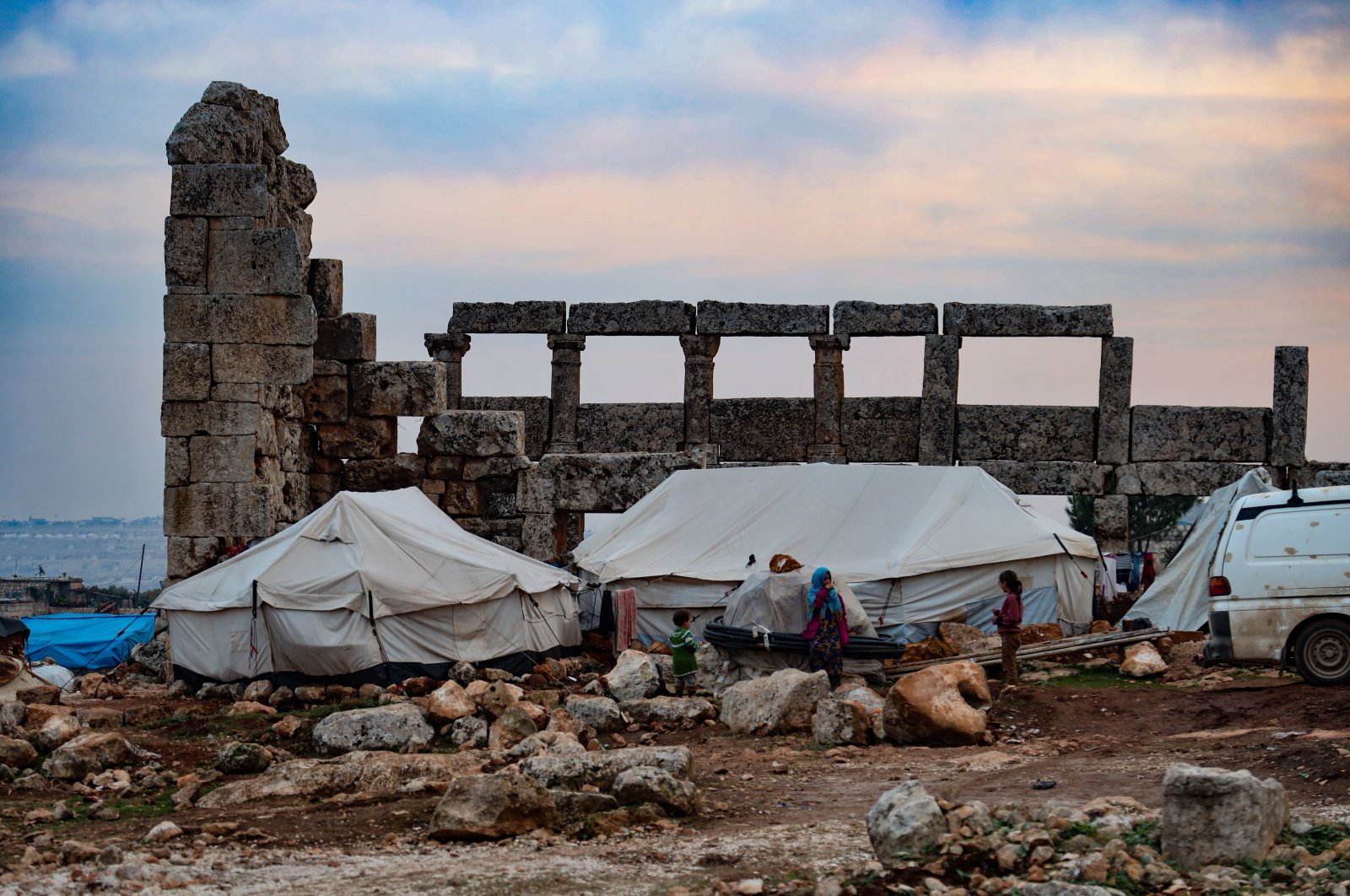 A group of displaced Syrians at their makeshift tents set up at the Dana ancient site, Idlib, northern Syria, Dec. 20, 2020. (Photo by Getty Images)
by Fazzur Rahman Siddiqui Apr 13, 2021 12:05 am
RECOMMENDED

In February 2011 in the Syrian city of Daraa, during a discussion among a group of youths about the recent fall of President Hosni Mubarak in Egypt, the teenagers, encouraged by the ongoing anti-regime protests in the region, in a sudden outburst of emotion graffitied "now it is your turn doctor" and "Down with (Bashar) Assad" on the walls of their school.

The events that followed in Syria have been a collective tragedy.

March 15 marked the 10th anniversary of the Syrian uprising when people took to the streets demanding the release of the children who had been arrested and tortured for the act of vandalism.

The Assad forces' backlash further enraged the protestors who have never looked back after the "Day of Rage" organized on April 28, 2011.

Even after a decade of mayhem and bloodshed, many are still engaged in tracing the genealogy of the revolt and see it as a part of a global conspiracy to destroy the state of Syria and to weaken its military forces which could have stood against the increasing aggression of Israel.

After a decade of revolt, many in the Arab world are either mourning the past or hailing the present. Today Egyptians can share the stories of economic progress, Tunisians can boast of their nascent democracy and Libyans can imagine a better political future. However, for Syrians, the past decade has left them alienated.

The early hope for the dawn of new politics in Syria soon disappeared and the ensuing polity was usurped by divisive and destructive forces. What dominated the later political course was bloodshed, mayhem, anarchism, sectarianism, radicalism and all-out chaos.

The humanitarian disaster and tragedy that war-torn Syria represents today has been unparalleled since World War II. Today 80% of Syrians are living in poverty, 9.3 million people are undernourished and around 2.8 million children are out of education.

United Kingdom-based monitoring agency, the Syrian Observatory for Human Rights (SOHR), has calculated that, in the past decade, 388,652 people lost their lives, including 117,388 civilians.

The report further suggests that in 2014 alone, 76,000 people were killed either in the armed conflict on the ground or in airstrikes. The terrifying memory of chemical attacks in Eastern Ghouta on Aug. 21, 2013, which killed 913 people, still haunts many.

The regime not only targets those fighting them on the battlefields, but it is also intolerant of the slightest criticism.

Recently, a female broadcaster was arrested for merely posting a radical quote from Genevan philosopher Jean-Jacques Rousseau and was charged with having committed a cybercrime.

A decade of war has uprooted millions from their cultural and economic roots. According to a report, 6.2 million Syrians have moved to other safer places within Syria, while 5.6 million have fled the country in search of shelter in neighboring nations like Jordan, Turkey and Lebanon.

Half of those looking for safety outside the country are regrettably children. According to a UNICEF report, since the outbreak of the war in Syria, 6 million children have been exposed to intense violence and warfare since they were born.

Today, one child is killed every 10 hours in Syria due to the violence.

The past decade in Syria is not only characterized by mayhem and bloodshed, but the country's economic woes have also pushed many to the brink of starvation. Today, Syria is in the midst of the worst economic crisis of the past decade as food prices have doubled and the World Food Program (WFP) has warned that 60% of the population, or 12.4 million, could suffer from starvation at any time.

The Syrian lira reached its lowest ever value against the U.S. dollar in February 2021, causing a decline in the value of salaries and making imports costlier.

Economic woes have hit all the economic syndicates and reportedly many doctors are moving to poorer countries like Sudan and Somalia for a better future.

In a recent TV interview, when Assad’s attention was drawn to the rising price of fuel and basic food commodities, his reply incensed many after he said that TV channels should avoid airing programs that present Syria as a food-deficit nation.

What further infuriated the audience was his attribution of the current food crisis to the harshness of global capitalism and neo-liberalism and his continued blaming of social media for the current economic miseries.

He also criticized Israel and brought up other social issues to distract the audience from the real problems, and said that Syria would never normalize relations with Israel nor legalize homosexuality.

The brewing economic crisis has devastated many families, impoverished the population and many have been left with no choice but to sell their belongings to survive.

A mother of three working in a salon in an interview said, "I had to sell my body for the sake of my children.”

One vendor said that over the past year, food prices have risen so rapidly that he has diversified his offerings to cover his expenses. He made pomegranate molasses and pickled eggplant but stopped when it became very difficult to acquire gas to cook with.

Many can be seen lining up for hours to get their share of subsidized bread from the ration shops.

Another aspect crippling the Syrian economy is the control of most of the country's oil fields and a large chunk of farmland (located in the northeast) by the PKK terrorist group and its Syrian offshoot the YPG with U.S. support.

The growing trend of radicalization among the youth is another source of worry for both the Syrian and global communities. According to a report, many refugee camps in Syria could turn into breeding grounds for terrorism as these camps are very often visited by veterans of different radical groups.

Recently the United Nations Counter-Terrorism Undersecretary-General Vladimir Voronkov said that the 27,000 children in different camps in Syria are very much vulnerable to such radical indoctrination. In the recent past, many detainees have been killed merely for showing disloyalty or abandoning their past association with radical groups.

Since the inception of the Syrian civil war, a series of negotiations have taken place, but unfortunately, nothing could alter the situation on the battlefield. The Kofi Annan Plan of 2012 was the first U.N.-led individual initiative that called for an inclusive and Syria-led peace process.

The U.N. Security Council (UNSC) resolution 2254 (2015) served as a foundation for a permanent cease-fire in Syria but could not be implemented because of the conflicting interests of different stakeholders.

A fresh effort was made jointly by Russia, Turkey, the U.S. and Saudi Arabia in November 2015 under the Vienna Plan but it too failed to meet any concrete outcome or end the political mess.

Similarly, multilateral negotiations were held under the auspice of the Moscow Principle (2015) and Geneva Process (2016-17) but these also failed.

The Astana Peace Process, launched jointly by Russia, Iran and Turkey in January 2017, was another effort to explore the possibility of implementing the UNSC Resolution 2254.

Around eight rounds of Geneva talks and 10 rounds of Astana talks proved equally disappointing. The Syrian Constitutional Committee failed to meet many deadlines despite holding of series of national dialogues as the regime was not receptive to the suggestions or amendments proposed by the opposition blocks.

Most recently, a new tripartite platform consisting of Qatar, Russia and Turkey was launched in Doha to establish permanent peace in Syria but one wonders if it is capable of bringing any stability to the war-torn country.

Amidst this political mayhem and economic woes, nothing can match Assad's survival instinct. It is clear to see today that there is no threat to his rule. Even the regional hostility to his regime has waned as the United Arab Emirates – a one-time enthusiast for Assad’s exit – reopened its mission in Damascus in December 2018 and many other Gulf countries may follow very soon.

Many Arab nations are demanding the return of Syria to the Arab League and aid from Arab League countries is pouring in to alleviate human suffering there.

Assad has succeeded in turning the growing ethnic and ideological divide on the ground to his advantage and his ability to cast all the opposition as terrorist groups has further consolidated his power.

The constant support from Russia, Iran, Hezbollah and other militias also helped his political survival.

A decade of civil war now seems to have settled for a complete stalemate. Despite the large-scale suffering of common people, unabated killing, the internal and external displacement of millions, the presence of rebel groups and regional proxies, Assad's authority remains unchallenged. This is because the Syrian people have not only lost their appetite for change but also their drive for unity and the independence to make that decision.

Over the months, despite some level of compliance with the cease-fire plan, peace in Syria still seems to be a mirage, and finally one can conclude that although the regime has not lost the war it has failed to win peace.