A friend in need is a friend indeed: Turkish-Italian solidarity in face of crisis 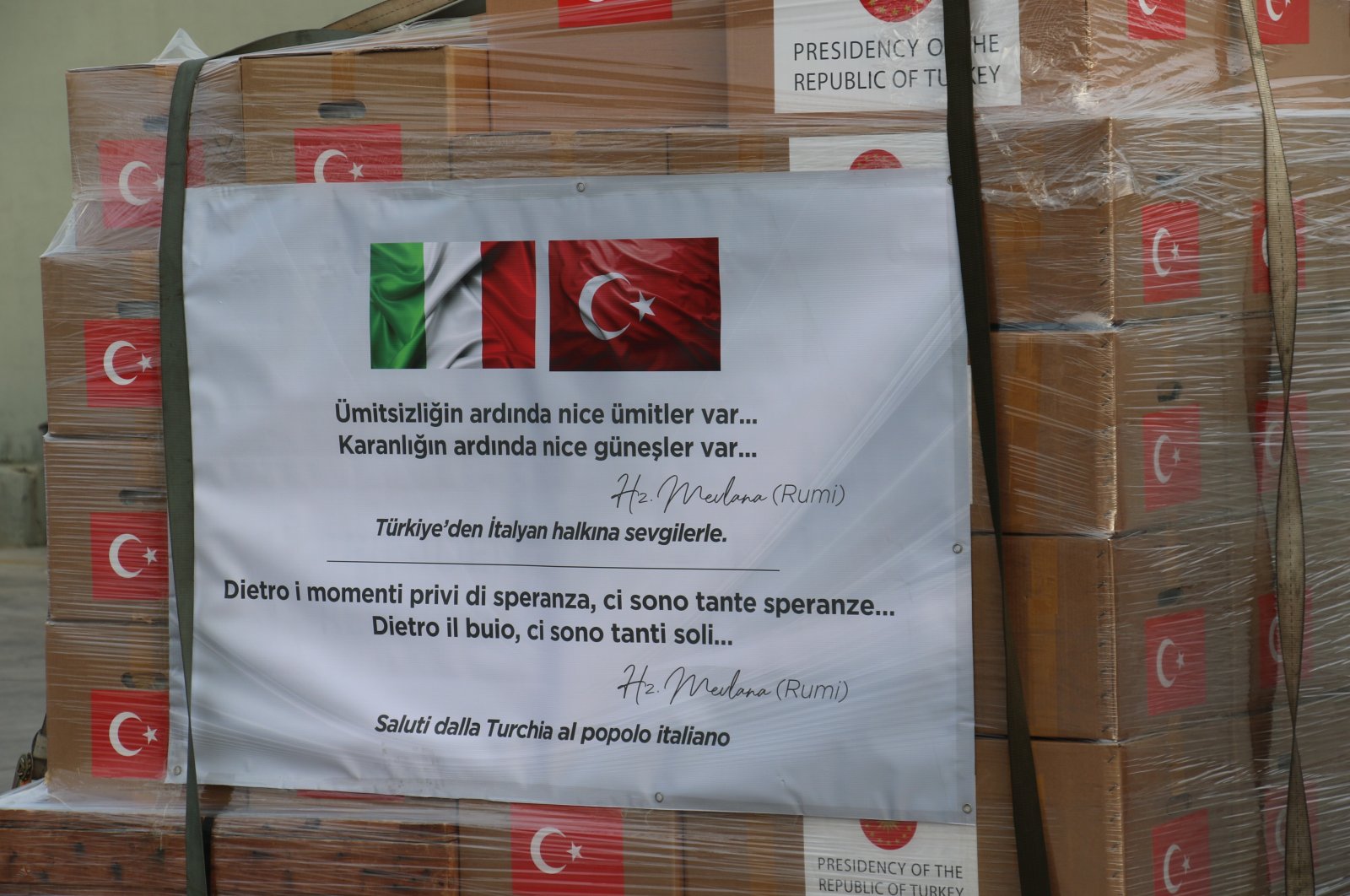 "There is hope after despair and many suns after darkness," a quote by the 13th-century Sufi mystic Mevlana Jalaluddin Rumi, is seen on a coronavirus aid package prepared by Turkish authorities to be delivered to Italy to help combat the pandemic, Ankara, Turkey, Wednesday, April 1, 2020. (İHA Photo)
by Valeria Gianotta Apr 08, 2020 12:05 am

Italy and Turkey are two countries of great importance, as is the friendship that binds them. The concrete facts that confirm this are plentiful in terms of history and culture, as well as business, investment and tourist exchanges.

There are common interests as well as some thorny issues by which both partners measure themselves. However, a true friendship proves itself in times of crisis, and it is the will to overcome obstacles that cements alliances.

On several occasions, the importance of bilateral relations between Turkey and Italy has been reiterated. These relations pivots around very strong historical and cultural connections and an equally solid economic partnership.

The countries' bilateral relations have deep historical roots dating back to the 14th century. Turkey and Italy are Mediterranean countries that are joint members of the Council of Europe and, of course, NATO allies that work in close collaboration.

Over time, their diplomatic relations have been facilitated by deep emotional ties that have led the two countries to be more than special friends. Strengthened by their shared Mediterranean heritage, the Turks have an almost instinctive sympathy for Italians, as has been recently confirmed.

The recent delivery of medical equipment and aid by the Turkish Red Crescent and the Turkish government in the fight against the coronavirus has underlined once again the huge degree of solidarity between Rome and Ankara.

At a time when Italy is experiencing its most dramatic crisis in the post-war period, Ankara has proven to be a precious friend. “In times of need, you discover who your friends are” is certainly a universal sentiment, but it is honored only by those who truly and concretely display that feeling of brotherhood and friendship.

This is what we felt upon finding that the first aid delivery from Turkey was joined by a message from Turkish Foreign Minister Mevlüt Çavuşoğlu to his Italian counterpart Luigi Di Maio, stating: “Italy is really important for us, my friend. We are here to offer any assistance.”

These were heartwarming words, especially given conflicts of interest that have emerged within the European Union, which has been strained by the current emergency. Although Italy is one of the EU's founding members, the bloc has shown great difficulty in satisfying Rome and this has fostered a deep feeling of abandonment among Italians.

Currently, many are the crises within the EU, but what is terribly clear is the deaf incommunicability between state members, marking a further division into two camps. Beyond the epidemic itself, there is also the matter of the economic fallout it leaves behind. While Italy and Spain lead the group that wants to issue a joint Eurozone debt, namely “corona bonds,” other countries such as Germany, Austria and the Netherlands keep rejecting this proposal.

This is nowadays the main issue at the core of the institutional union, whose functioning mechanisms are marred by rusty logic and subject to domineering and patronizing positions.

Since “union” is supposed to imply shared participation, commonality and solidarity, new awareness and synergies are arising. Despite the propaganda and prejudices carried by certain media outlets, however, the load of aid sent to Italy by Turkey did not go unnoticed.

"There is hope after despair and many suns after darkness.” These were the words, originally penned by Mevlana Jalaleddin Rumi, which were inscribed onto the crates of aid supplied by the Turkish Ministry of Defense, upon the orders of the Presidency.

Words that temper hearts and go beyond any mere political interests and gains, indeed. This gesture was widely appreciated by Italians, as shown when a 10-year-old boy sporting an Italian football jersey cried: “I would like to thank the Turkish people and the Turkish government for their support and help. Thank you." Clasping his chest with his right hand in a traditional Turkish form of obeisance, he even added in Turkish: “Teşekkürler Türkiyem. Teşekkürler Türk Halkı," which means in English, "Thank you, my Turkey. Thank you, Turkish public."

Despite the darkness of the current mood, a further bond between the two countries emerged, centered around the story of a child as, just a few days ago, hematopoietic stem cells were taken from a Turkish donor and urgently transported to Italy to be administered to a 2-year-old child in Rome.

Despite the current restrictions on commercial travel, the pick-up and transport operation was organized by the military. The event was another sign of effective teamwork between Italy and Turkey, showing an eager readiness to collaborate.

Indeed, when Italy proclaimed a day of national mourning for the country's COVID-19 victims on March 31, Turks residing in Italy affixed to their windows the flags both of Turkey and Italy at half-mast.

It was a simple and sincerely touching gesture to express solidarity in the pain of the host country. Similarly, the Turkish flags of diplomatic missions in Rome and Milan were lowered to convey condolences to the families of the victims. Indeed, although each state has tried to protect itself by closing its borders, no limit can be set on humanitarian actions, the bonds of fraternity, feelings of mutual sympathy and unconditional support.

Further examples abound. A video message showed a number of Italians attempting to pronounce a few words of Turkish telling their Turkish counterparts to stay home and take care of themselves. This was certainly an emotional display and sparked a prompt reply from the Turks. They did not wait long to answer and cheer up their Italian counterparts, instilling courage and motivating the Italians to not to give up.

Sincerity on the frontline

Furthermore, the sincere affection felt by ordinary people has been reflected in many requesting to join Italy on the frontline of its current battle. Among the many celebrities who have offered assistance, Turkish director Ferzan Özpetek has consistently spoken up in support Italy by posting videos to instill strength and hope. Similarly, Turkish actress Serra Yılmaz has regularly posted messages both in Italian and Turkish asking all citizens to stay at home.

Linked by a great love for Italian art and culture, Ankara-based tenor Murat Karahan, general director of the opera and ballet theaters of Turkey, in a television interview with TRT World sent waves across the public with a rendition of “At Dawn I Will Win” from Puccini's "Turandot." The tenor added in Italian, “Vinceremo – we will win, Italy.”

Moreover, support can be felt every day from the various groups of Turks in Italy or Italians in Turkey. Recently, the Turkish Culture Institute Yunus Emre in Rome launched free online courses in Turkish as a sign of solidarity and has attempted to enrich Italians' daily routines at home.

All of these initiatives are aimed at building bridges and increasing solidarity. Hence, while in the past we used to hear that “the best friend of a Turk is only a Turk,” the current reality clearly refutes this thesis. Turkey and the Turkish people prove to be full of heart. Thanks so much; you have been able to transmit your warmth, both human and material, in the current and painful calamity of COVID-19. Thank you, Turkey; take care of yourself, too.