Ahead of COP26: Why is climate finance so important? 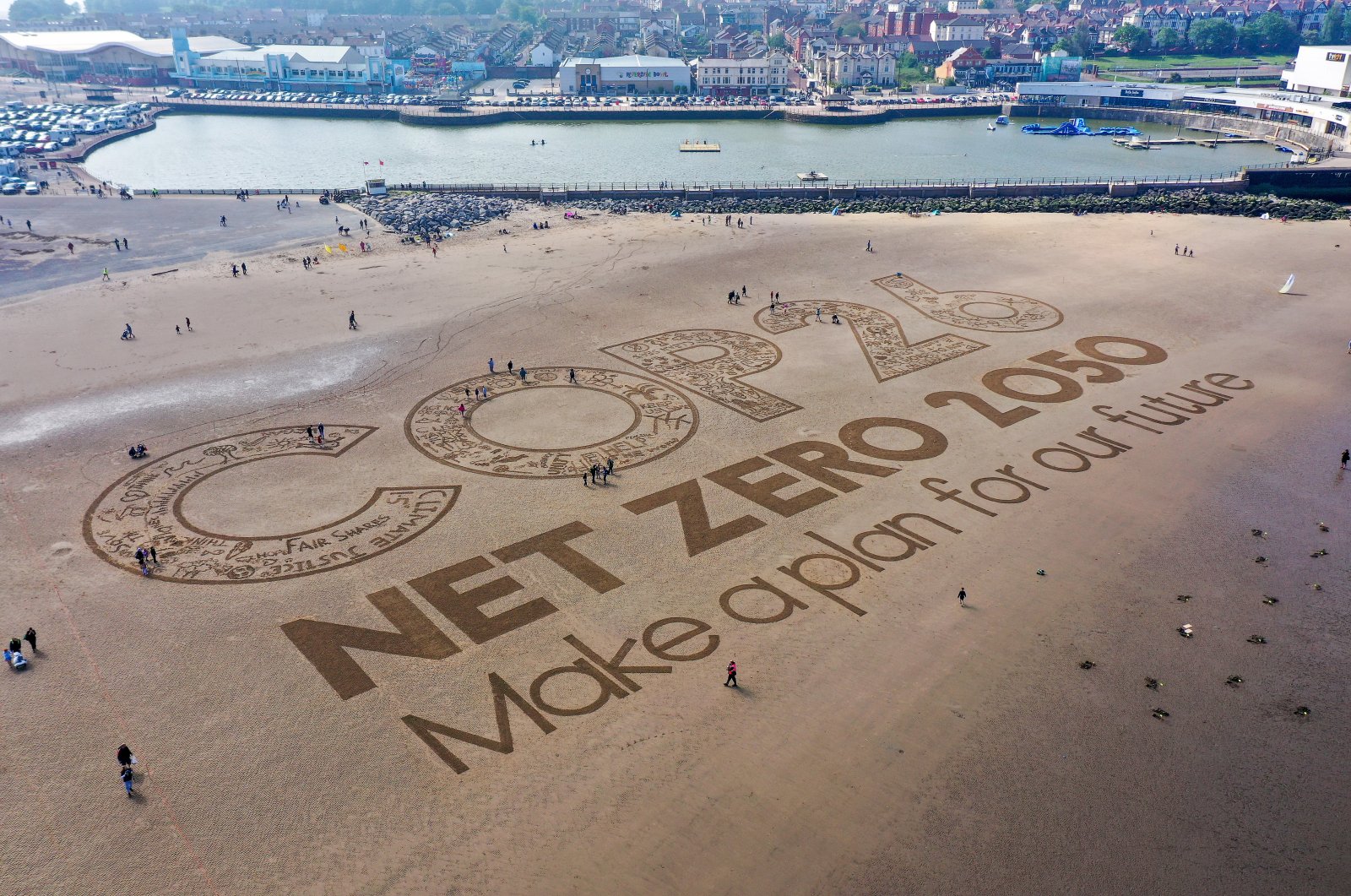 Before it's too late, the international community must find a way to mobilize to address the climate crisis. The COP26 in Glasgow could be a good start for it

Nearly five years have passed since the historic Paris Agreement, adopted at the 2015 United Nations Climate Change Conference, or COP21, took effect. One of the expectations from the agreement, which became the centerpiece of international climate change policy, was to direct financial flows in the areas of emission reduction and adaptation to climate change.

As a matter of fact, the agreement stipulated that developed countries should continue to provide public financing to developing countries in order to reduce emissions and make investments in adaptation to climate change. It invited other countries to provide support on a voluntary basis.

As of 2020, the obligations for developing countries to provide $100 billion annually in the context of climate finance were emphasized by the developed countries. It was decided to further increase this figure after 2025. The deal also agreed on the balanced distribution of climate finance resources between adaptation and mitigation in the field of adaptation finance.

Past climate conferences have generally attempted to create regulations to monitor the finances provided by the developed countries. Also, the developing countries’ access to these finances or the inadequacy of the adaptation investments has often been a topic of discussion.

At the 2021 United Nations Climate Change Conference, also known as COP26, which will be held in Scotland’s Glasgow on Oct. 31, countries are expected to discuss the climate finance target after 2025 and the possibility of increasing investments in adaptation.

As COP26 approaches, the issue of climate finance comes to the fore more and more on the international agenda. The 2021 report of the Intergovernmental Panel on Climate Change (IPCC) showed that if the global temperature increase is to be kept below 1.5 degrees Celsius (2.7 degrees Fahrenheit) in the next 20 years compared to the preindustrial era, large-scale structural conversions must be made. The way to realize this transformation is to provide sufficient financial resources and to direct these financial resources in the most appropriate way.

Thus, the global developments in the context of climate finance must be addressed during the Glasgow negotiations, where Turkey will be a party for the first time.

In 2010, developed countries promised to mobilize an annual financial resource of $100 billion by 2020 to be transferred to developing countries. In order to help achieve this goal, the Green Climate Fund (GCF) was established within the scope of the United Nations Framework Convention on Climate Change (UNFCCC) and it was envisaged that it would become the most important fund under the financial mechanism of the UNFCCC.

At this point, it is clear that the GCF or the UNFCCC financial mechanism should not be evaluated alone in reaching the annual target of $100 billion in the fight against climate change. The international climate finance system consists of many complex and integrated structures and actors, each of which has its own rules and priorities. In a very general way, the mechanisms of this system contain the UNFCCC financial mechanism, bilateral aid of donor countries, grants, loans and other tools provided by multilateral development institutions.

In addition, there is direct support from the private sector expressed on various platforms. All these actors and developing countries, which are the beneficiaries of these funds, constitute the picture mentioned in the $100 billion annual target.

According to data provided by the Organisation for Economic Co-operation and Development (OECD), the total climate finance provided and mobilized by developed countries to developing countries in 2019 was $79.6 billion. In other words, in 2020, an increase of more than $20 billion will be required to reach the $100 billion target. The 2020 data has not been shared yet. Considering that the financial resources increased by 2% in 2019 compared to 2018, it seems quite debatable how much of the $20 billion increase can actually be achieved.

We are faced with a familiar predicament between mitigation and adaptation. According to reports, the share of funds provided for greenhouse gas reduction in 2019 was 64%, while the share allocated to compliance investments was 25%, and the share of funds serving both areas was 11%.

Multilateral development banks have decided to change the composition of the support they provide to countries, especially since the Paris deal. In this context, they announced that they will realize their investments in line with the agreement. In other words, in the upcoming period, multilateral development banks will stop supporting fossil fuel-based investments and will support green and environmentalist investments.

These banks have started to provide comprehensive reports on the progress they have made. The nine banks, including the World Bank, the European Investment Bank (EIB) and the European Bank for Reconstruction and Development (EBRD), which shared their analysis of their 2020 investments, announced that they contributed a total of $66 billion to climate finance in 2020 whose $38 billion was made to low and middle-income economies.

During this period, the amount of financing spent on greenhouse gas reduction was approximately $50 billion, while the amount allocated for adaptation was $16 billion. These figures show us that 76% of the financial support provided by multilateral development banks in 2020 is directed to reduction investments and the remaining 24% to adaptation investments.

The GCF, which is expected to be the main element of climate finance under the UNFCCC, has played a role in the funding of 190 projects since its establishment and has created a value of $37.2 billion when calculated together with the co-financing.

It is seen that developed and some developing countries, which contribute voluntarily, have made a commitment of $10 billion in total to the GCF. Of this amount, $6.1 billion was allocated to projects currently in progress, and the fund approved 13 new projects in 2021. While 62% of the said investments were made with a reduction focus, the remaining 38% was spent on compliance investments.

Debate on the horizon

When we evaluate all these figures and findings, two main results emerge. First, the climate finance resources are insufficient at this stage in terms of reaching the $100 billion annual target and the adaptation investments continue to lag behind mitigation investments.

It is frequently mentioned that the G-20 countries do not fulfill their financial commitments regarding the inadequacy of climate finance. They do not sufficiently reduce their fossil fuel-based investments. Just think of the recent increase in energy prices that has bolstered demand for natural gas-based investments. This very development may also cause a decrease in the amount of funds that can be allocated to environmental investments. When considering this, it is unrealistic to expect developed countries to take the necessary steps in the near future. Considering the public-sourced bilateral climate finance, which decreased by 10% even in 2019, when the impact of the global pandemic was not observed, we see the risk of a decrease in the share of countries' budgets for environmental investments in the coming period.

Developing countries, especially the least developed ones, need support for financing clean energy investments due to their political or macroeconomic risks. Developing countries clearly need more help, especially in the field of adaptation where it is difficult to attract investment due to the increasing number of adverse weather events and natural disasters caused by climate change.

For example, the World Bank calculated that the cost of Cyclone Idai, which devastated Malawi, Mozambique and Zimbabwe in 2019, was $2 billion. In the context of reduction, the International Renewable Energy Agency (IRENA) stated that an annual investment level of $5.7 trillion should be reached by 2030 in order for the energy sector to reach net-zero emissions on a global scale. The European Commission revealed that an additional investment of $417 billion per year is needed to reach the 2030 climate target.

Despite this pessimistic picture, at the recent U.N. General Assembly (UNGA) gathering, United States President Joe Biden announced that the U.S. government's share of climate finance would increase to $11.4 billion by 2024. Or, Chinese President Xi Jinping said Beijing would end coal subsidies abroad. When it comes to the European Union, the bloc has ambitious targets and commitments to combat climate change. Such examples can be defined as promising developments.

It may be possible to see upward momentum in climate finance as multilateral development banks stop supporting fossil fuels and direct the funds they will allocate in these areas to investments in line with the Paris Agreement.

As for the inadequacy of adaptation investments, sufficient progress has not been made in the decision made within the scope of the Paris Agreement, despite the time elapsed with regard to the balanced distribution of funds between reduction and harmonization. Especially at a time when adverse weather events and disasters due to climate change have increased, this issue has become a struggle for survival for many underdeveloped countries and small island states. In the fund compositions of bilateral aid and multilateral development banks, abatement investments dominate by far.

At this point, it would be useful to open a separate parenthesis for the GCF. Despite its aim to create a source of funds to eliminate the imbalance between investment and abatement investments, the GCF cannot fully achieve this goal. The very fund is the subject of discussions at the point of approval of the projects. As a result of political conflicts between developed and developing countries in the board of directors, developing countries complain that the projects they need are not approved by developed countries for various excuses.

To summarize, it is clear that the target of providing climate finance of $100 billion annually to developing countries (it was promised by developed countries some 11 years ago) is still not met. With this promise, although the global climate finance mechanism has been reshaped and gained momentum with the acceptance of the Paris Agreement, it is obvious that developed countries with historical responsibilities should make more efforts to fulfill their commitments.

Underdeveloped countries and small island states, which need serious financial resources to realize their adaptation investments, believed that some of the funds spent for reduction investments with the Paris Agreement could finally be used to meet these needs. However, as of today, it is clear that much more determination is needed in this regard. The share of funds for mitigation in climate finance provided by both bilateral aid and multilateral development banks is predominant, and this gap has not closed despite the passing years.

The GCF plays a huge role in the annual target of $100 billion under the UNFCCC and has focused on the discussions within itself. Turkey has been unfairly prevented from benefiting from this important fund under the UNFCCC, and it has also not been included in any related project since it is not classified as a developing country.

To conclude, the recent UNGA in New York showed how much the world leaders care about the climate issue. Therefore, without a doubt, climate finance will be at the top of the world’s agenda. Hopefully, all parties in the upcoming negotiations in Glasgow can act responsibly and take a historic step against climate change.