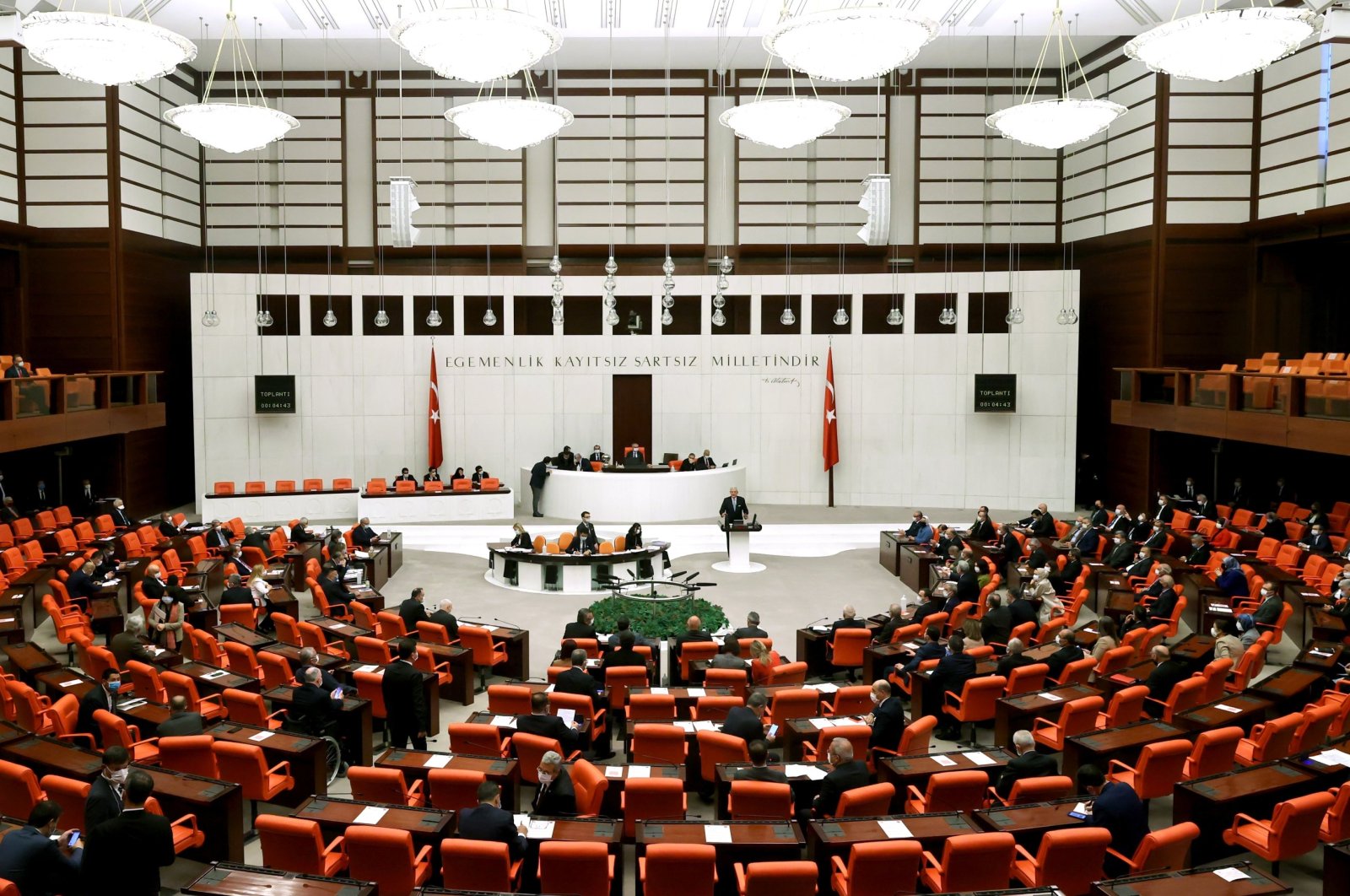 The United Nations Wednesday welcomed Turkey's ratification of the Paris Climate Agreement, a move that will contribute to global efforts against climate change.

"It's essential that all countries continue to boost ambition, and the Secretary-General has been clear that G-20 countries must lead the way," Stephane Dujarric, spokesperson for U.N. chief Antonio Guterres, told Anadolu Agency (AA).

Dujarric's remarks were made shortly after all political parties in the Turkish parliament voted "Yes" to the agreement.

Parties to the U.N. Framework Convention on Climate Change reached an agreement on Dec. 12, 2015, to fight climate change and achieve a sustainable low-carbon future at the U.N. Climate Change Conference (COP21) in Paris.

The Paris Agreement, defined as "a bridge between today's policies and climate-neutrality before the end of the 21st century," seeks to strengthen the global response to the threat of climate change by stopping global average temperatures from rising more than 2 degrees Celsius (3.6 degrees Fahrenheit) above pre-industrial levels over the next century and to pursue efforts to limit the temperature increase even further to 1.5 degrees Celsius, if possible.

Presidential Spokesperson Ibrahim Kalın also congratulated the unanimous adoption of the law on approval of the Paris Climate Agreement in the General Assembly of the Turkish Grand National Assembly (TBMM).

Kalın made a statement on his Twitter account, quoting the social media post of Environment and Urbanization Minister Murat Kurum regarding the Paris Climate Agreement, "An important step has been taken for the future of our country. Best wishes."

Emphasizing that they will continue to work for a greener and nature-friendly world, Kalın said that he congratulated everyone who contributed and supported them.

A new era in climate policy is beginning in Turkey after it ratified the Paris Agreement, according to a joint statement released on Thursday by 15 environmental groups in the country.

Turkey is expected to set new targets and prepare action plans for emissions reduction after it became one of the 191 countries that ratified the deal on Wednesday to contribute to global efforts against climate change.

The statement, signed by such organizations as the World Wildlife Fund Turkey and the Climate Action Network Europe, underlined that this was a positive step on Turkey's part, adding that with the adoption of the net zero emissions target by 2053, the country would enter a new era in its climate policy.

It also pointed to statements by Turkish President Recep Tayyip Erdoğan at the U.N. General Assembly last month that the document's approval in parliament would bring radical changes in the country's investment, production, and employment policies.

They said that to fulfill this commitment and the 2053 target, emission reduction targets were expected in the short term, as were new action plans, especially in the field of energy but also in industry, transportation, buildings, agriculture, waste, and the use of natural assets.

The statement went on to say that in order to make policies that are in line with the goal of limiting global temperature rise to 1.5 C degrees under the Paris Agreement, Turkey should review its nationally determined contributions statement and present a "more ambitious" emissions reduction target.

The statement highlighted that the energy sector was the first priority in the new action plan that Turkey is set to prepare to reduce greenhouse gas emissions in line with its new climate policy.

It also emphasized that Turkey should phase out fossil fuels and end support for them.

"As a first step in its new climate policy, it is of increasing importance that the government makes a commitment that no new coal plants will be allowed to be built," said the joint statement, noting that to reach net zero emissions by 2053, such "important milestones" would need to be set today.

The statement also stressed that it would be important for Turkey to set a target year for its coal phaseout. "Turkey can become one of the leading countries in this regard by planning an exit from coal," it added.

It noted that steps to be taken to combat climate change would entail benefits in such areas as employment, clean air, and technological development, all of which could boost national income by 7% via an active climate policy.

Eyes are turned to the steps that Turkey would take from now on after the Turkish parliament on Wednesday ratified the Paris Climate Agreement to contribute to the global efforts against climate change.

As a first step, Turkey is expected to update its national climate action plan, officially known as Nationally Determined Contribution (NDC), including emission reduction targets in the "energy, waste, transportation, buildings and agriculture" sectors and submit them to the U.N. Secretariat.

Turkey committed to reducing its emission increase by %21 by 2030 as part of its climate action plan submitted to the U.N. Secretariat in 2015.

As part of the Paris Agreement, Turkey is expected to update and resubmit its NDC to the Secretariat for the 2030 target.

Another important target of Turkey in the fight against climate change is to achieve "net-zero carbon emissions" by 2053, a plan announced by Erdoğan.

Net zero-emission means that all man-made greenhouse gas emissions must be removed from the atmosphere through reduction measures, thus reducing the Earth's net climate balance, after removal via natural and artificial sink, to zero.

Turkey plans to organize a council in Jan.2022 to combat climate change, the country's Environment and Urbanization Minister Kurum announced on Monday.

Turkey will determine a long-term strategic action plan on combating climate change at the meeting, which will be attended by representatives of the private sector, non-governmental organizations, universities, industrialists and international organizations.

The vote followed President Erdoğan's announcement at the U.N. General Assembly (UNGA) in September that Turkey would implement the accord in time for next month's U.N. Climate Change Conference in Glasgow.

"In line with constructive steps and declarations of contributions, Turkey plans to submit the Paris climate pact to Parliament in October," Erdoğan told the UNGA.

The Turkish leader underlined that the world should put its focus on climate change because, beyond being an environmental issue, this problem could lead to irreversible consequences for the Earth.

"Turkey is not indifferent to any global problem, crisis or call, and will also do its part on climate change and protecting the environment," he said.

"It is possible to prevent the coronavirus with vaccines but there is no laboratory solution for climate change," he also added.

Turkey has felt the full force of climate change, with a rapid succession of floods and wildfires killing some 100 people in July and August. Swathes of the country have also been suffering through an extended drought.

Nearly 200,000 hectares (around 480,000 acres) of forest have been scorched in Turkey this year – more than five times the annual average for 2008-2020, data from the European Forest Fire Information System (EFFIS) show.

Climate change has become one of the greatest issues of concern to Turkey's youth, millions of whom are set to vote for the first time in elections expected in 2023.

Some 95% of young people in Turkey believe climate change is one of the biggest threats facing the country, according to a report last month by the British Council as part of its Global Youth Letter on Climate Action.

Turkey's hesitation to ratify the accord came over disputes about the amount of funding afforded to specific countries and timelines for putting stricter regulations into place.

Turkey's total greenhouse gas emissions rose by 157.7% between 1990 and 2019, according to the state statistics service.

One Western diplomat said Turkey had invested strongly in the infrastructure for renewable energy, including solar and wind, but remained weighed down by its reliance on coal.

"Turkey's policy on the environment is reactionary, as we saw with the mucilage and the debate around importing European plastic waste," the Western diplomat claimed.

The shores of Istanbul were covered this summer by a viscous mucilage, also known as "sea snot", which scientists blamed on an accumulation of pollutants being dumped into the Sea of Marmara.

The government this year banned the import of some plastic waste products from countries including France and Britain, after a public backlash over images showing the waste dumped in ditches or burned by roadsides.