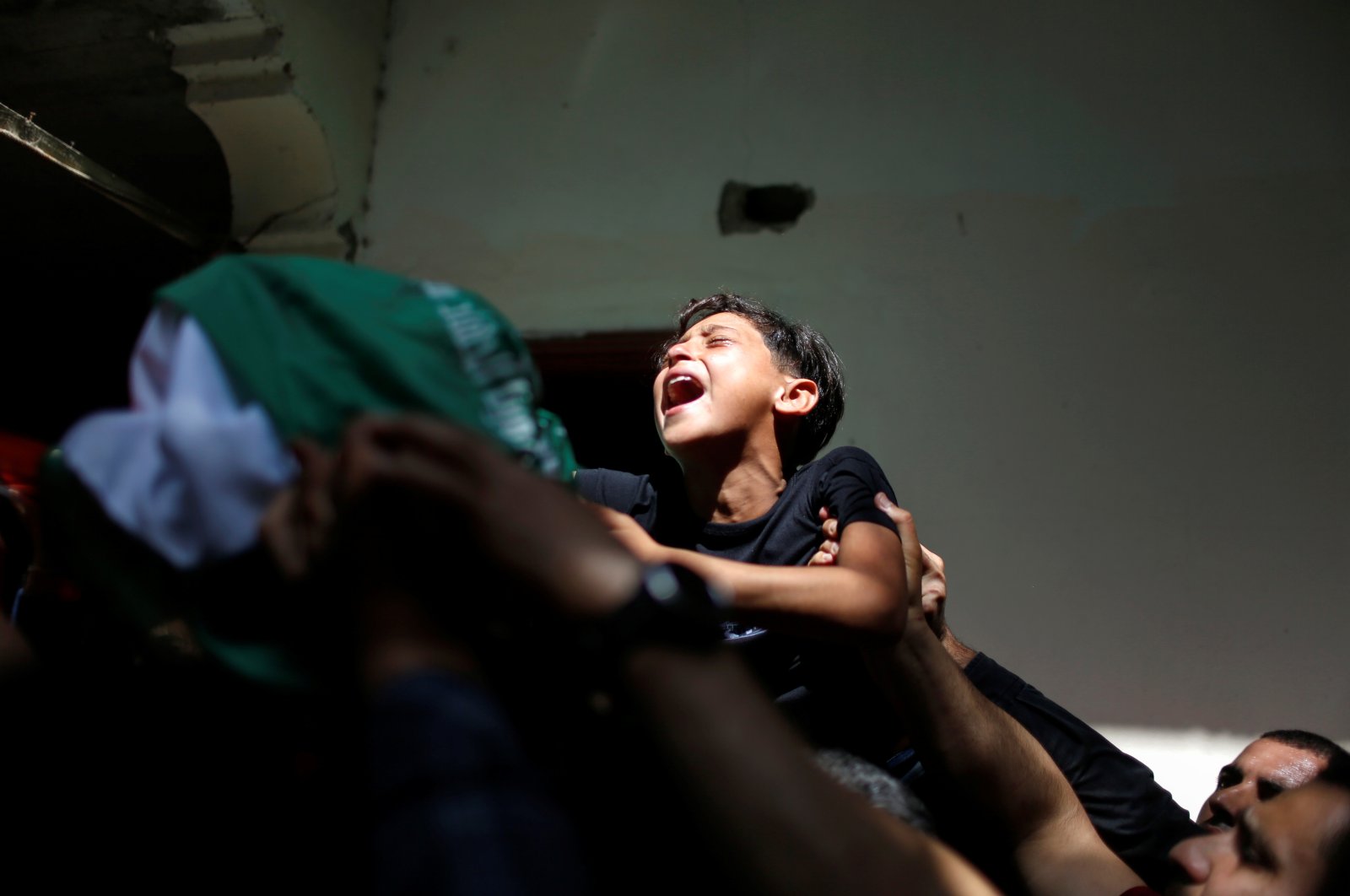 A Palestinian boy cries for his brother Ahmed Al-Shenbari, who was killed by Israeli bombardments, as mourners carry his body during his funeral in the northern Gaza Strip, Palestine, May 11, 2021. (Reuters Photo)
by Betül Özel Çiçek May 21, 2021 12:05 am
RECOMMENDED

It happened one night. Vigil after vigil, they were harassed, tortured, maimed, killed. With deliberate evil and cruelty. On purpose, on demand. Some were made to watch; all, bound in one way or another, only their voices and prayers (aren’t they the same?) indomitable. All, in incurable despair. And then, there were none.

The streets empty, the ruins, the hills. Nobody left behind. Not even the ghosts. Except the unworthy and unwilling. Whose numbers were less than you would imagine. Not just one city, one country, one continent. All were asked. All said yes. A thousand times yes. Yes. Please.

They took everything worth having. Which was less than you would imagine. Their laughter, their hope, their faith, their word, their benevolence, their glow. The world is now without them all.

The world will never see them again. Never feel the light steps of their children, never hear their poems (which were like beautiful flowers in a cemetery), their singing with joy, never be filled with diligence and hope anew as they faced another day.

They didn’t take their deeds that complete the world, though. Their gifts to the world, they left behind. One last act of blessing for their brethren. Brethren bent on maiming and killing them. Brethren thinking they were better without them.

(At the place they were finally summoned, invited, received with open wings, they were whole again, cured, healed, in love. Nothing bad remained in them, with them, not even as a distant memory.)

At first there were jubilations. All around the world. Of course. Only to be expected. Their brethren always thought they were the problem. If only they ceased to be. Then the world would be a better place, would be theirs only. And they thought it was so. For a while.

(That last gift from them, the last blessing, strong as a bull weak as an almond blossom, lay in the ruins, unnoticed, unvalued, diminishing as the years passed like a pearly mist on a swamp, never to be seen again.)

All that the eye can see, is ours now, the brethren believed; were relieved. The world is ours now. Indisputably.

The world, the world that had lamented with them, now lamented for them. Yearning for them. Cringing, trembling at every step the brethren put on it without their counter steps to balance out the malice. Not a cypress left unbroken, the sky always incomplete. The world in silent agony.

The brethren didn’t understand what was happening. They didn’t see it coming. They had eyes but didn’t see. They had ears but didn’t hear. The world barren, the world without hope, without word, without benevolence, faith, glow. The world they wanted so much that they destroyed leagues of their brothers to possess it wholly, now a useless, bitter waste, right perfection wrongfully disgraced. The brethren now a barren, bitter waste.