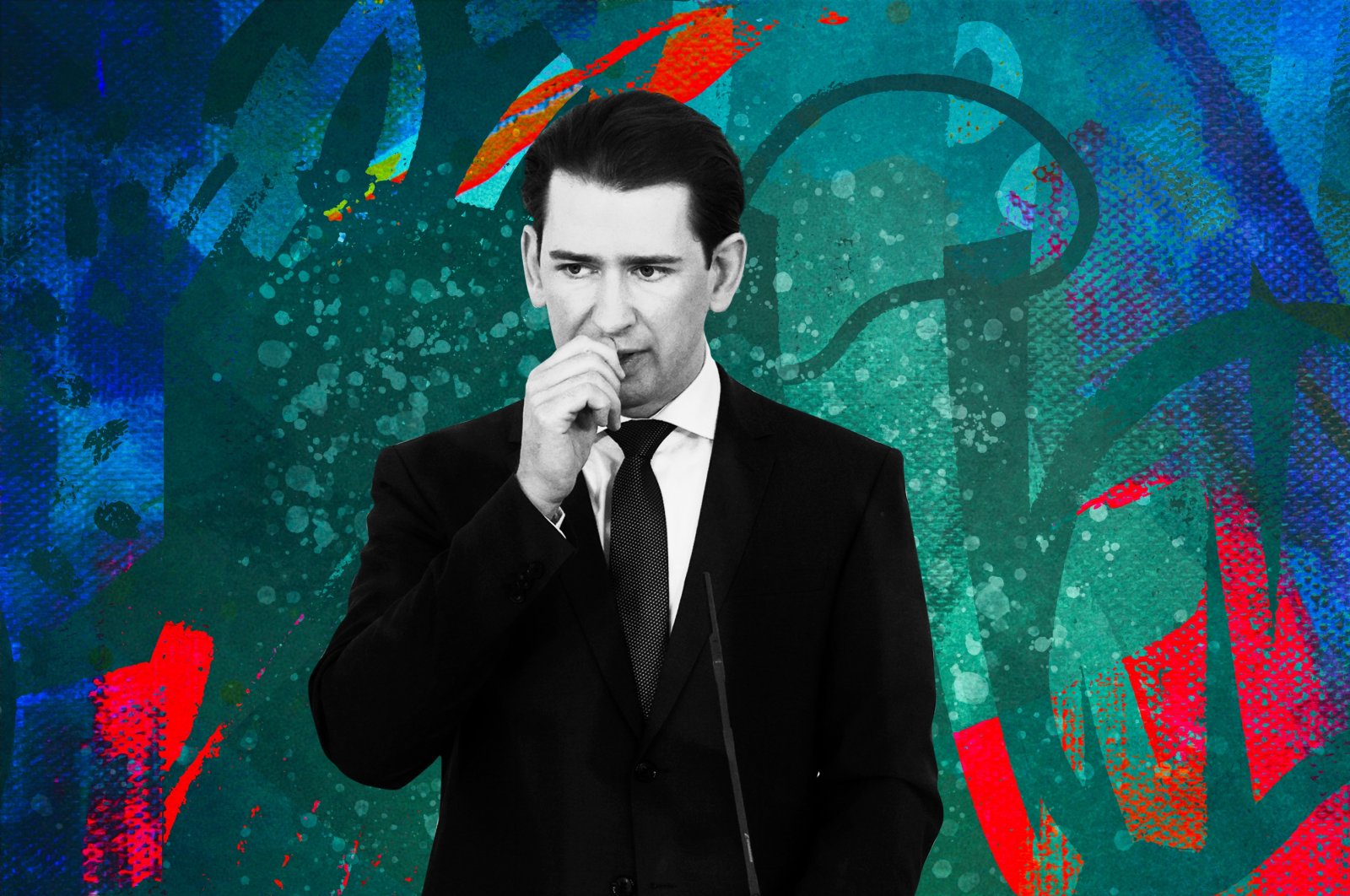 A photo illustration by Daily Sabah’s Büﬂra Öztürk depicts Sebastian Kurz, the leader of the Austrian People’s Party (OVP) and former chancellor of Austria.
by Muhammed Ali Uçar
Oct 12, 2021 12:05 am

Kurz has finally resigned because of his populist politics since 2017 but is not departing from the chairpersonship of his party. He will try to govern the system from the back seat

Austria is facing one of its biggest scandals in the history of the republic. Sebastian Kurz, the leader of the Austrian People's Party (OVP) and former chancellor of Austria, is now a target for the Central Prosecutor's Office for Prosecution of Criminal Cases Economy and Corruption (WKStA). The prosecutor's indictment consists of 106 pages. The allegations against Kurz and his close team, two media outlets and two pollsters, unfolded after the police searched the OVP headquarters and Kurz's office in the Federal Chancellery. The accusations are very grave: corruption and bribery. The prosecutor’s office said that “between the years 2016 and at least 2018, budgetary funds of the Federal Ministry of Finance were used to finance surveys conducted by a polling company in the interest of a political party and its top official that was exclusively motivated by party politics, and sometimes manipulated.”

Not the first fraud

When Kurz became leader of the OVP in 2017, conservatives saw him as a future leader of Europe. Considered the fresh face of the movement, Kurz, after winning the elections, formed a coalition with the far-right party of Heinz-Christian Strache: the Freedom Party of Austria (FPO). This was Kurz's first official step in pushing both his party and Austria ahead of populist politics. Being au fait with the rise of the far-right in Europe, Kurz aimed to consolidate right-wing voters in Austria by forming a coalition with the FPO. With this move, Kurz established himself as the standard-bearer of conservatism in Europe.

To achieve the latter, he enacted his first manipulation through Islamic nursery schools. When he was the minister for foreign affairs and integration, he was accused of manipulating a study on Islamic nursery schools that he had commissioned from a professor at the University of Vienna. The original version of the report included the following statements from a Muslim parent: "Values such as respect, serenity, the individuality of the child, hygiene, satisfaction of the children, punctuality, love, warmth, and security, independence and transparency of the rules." Nonetheless, one of Kurz's officials at the ministry changed these statements to the following: "It is particularly important to them (the parents) that the children are taught Islamic values." Since the target of this manipulation was only the Muslim community, it did not arouse a great reaction in the predominantly Christian society. In fact, support for Kurz from the right-wing increased even more.

But this manipulation was just the beginning. This time, as his manipulation targeted all voters and was financed through taxes collected from the people, it has drawn the ire of the whole society. If Austrian society had read the writing on the walls from the case of the Islamic nursery schools, Kurz would not have been able to lead the country into scandals for four long years.

Discussion of yet another manipulation in Austria is becoming a byword for the political climate of the country. It is claimed that the taxes were transferred to a media organization that manipulated the polls in favor of Kurz and his party. This is not the sole allegation during his term as chancellor, since Kurz is also being investigated for making false statements before the Ibiza Investigation Committee. The "Ibizagate" scandal surrounding Strache, the vice-chancellor of the time, has deeply affected many institutions and people in the country. In the Ibizagate scandal, Strache was recorded by a hidden camera describing his planned rise to power, and when these were published, he had to resign. Nevertheless, Kurz seems to have realized these plans – at least the media-related parts.

Kurz tried to gain votes based on the topic of immigrants and Muslims through populism and demagoguery, rather than by introducing reforms and strengthening the economic and social life in Austria. In fact, for the first time in the history of the Republic of Austria, which has followed a policy of neutrality, he explicitly sided with Israel in the Israeli-Palestine conflict by hoisting the Israeli flag over the Chancellery building. The reason for this was Kurz's efforts to change the agenda from the Ibiza investigation and gain Israel's support. According to Austrian political scientist Heinz Gärtner, Kurz’s move meant Austria's departure from both its mediation role in the Israeli-Palestine conflict and its advocacy for a two-state solution that it had maintained since former Austrian Chancellor Bruno Kreisky, who was the first statesperson to propose it at the United Nations. It is evident that the ongoing developments have damaged and continue to damage Austria's international reputation.

The tangled relationship between politics and media in Austria does not boil down to a single person. Rather, the system has been designed in tandem with the rise of populism since 2017. Kurz's irrational populist policy of constantly targeting Muslims and immigrants has put Austria on corrupt political ground seeded by the abuse of power, illegal party financing and the intermingling of media and politics. A fresh start is urgently needed before the whole country is damaged and its image in the international arena is further strained by the legacy of Kurz.

Perhaps it could have been worse for Kurz. He could have been the first and only federal chancellor to be dismissed by a vote of no confidence. With his recent resignation, however, he avoided it. However, he proposed current Foreign Minister Alexander Schallenberg of the OVP as his successor. Au fond, it is more than just the chancellor that needs to change in Austria: the government and the political system that Kurz has established in Austria must change. Kurz will remain as party chairperson and will try to continue running the government from the back seat. In this case, the political dynamics of Austria will remain unchanged, and so it does not seem likely for the system to work. Either the coalition will dissolve and early elections will be held or a technocratic government will be established. When the government collapsed after the Ibizagate scandal in 2019, a technocratic government was established for the first time in Austrian history. One of the best options, until the early general election, is the reestablishment of a government similar to Brigitte Bierlein's chancellorship. Former Federal President Heinz Fischer also stated that "given the first successful government under Bierlein, one can imagine a new government of experts." To improve the image of Austria in the international arena, an early election and a new page in politics are a must.