Bangabandhu and the story of Bangladesh 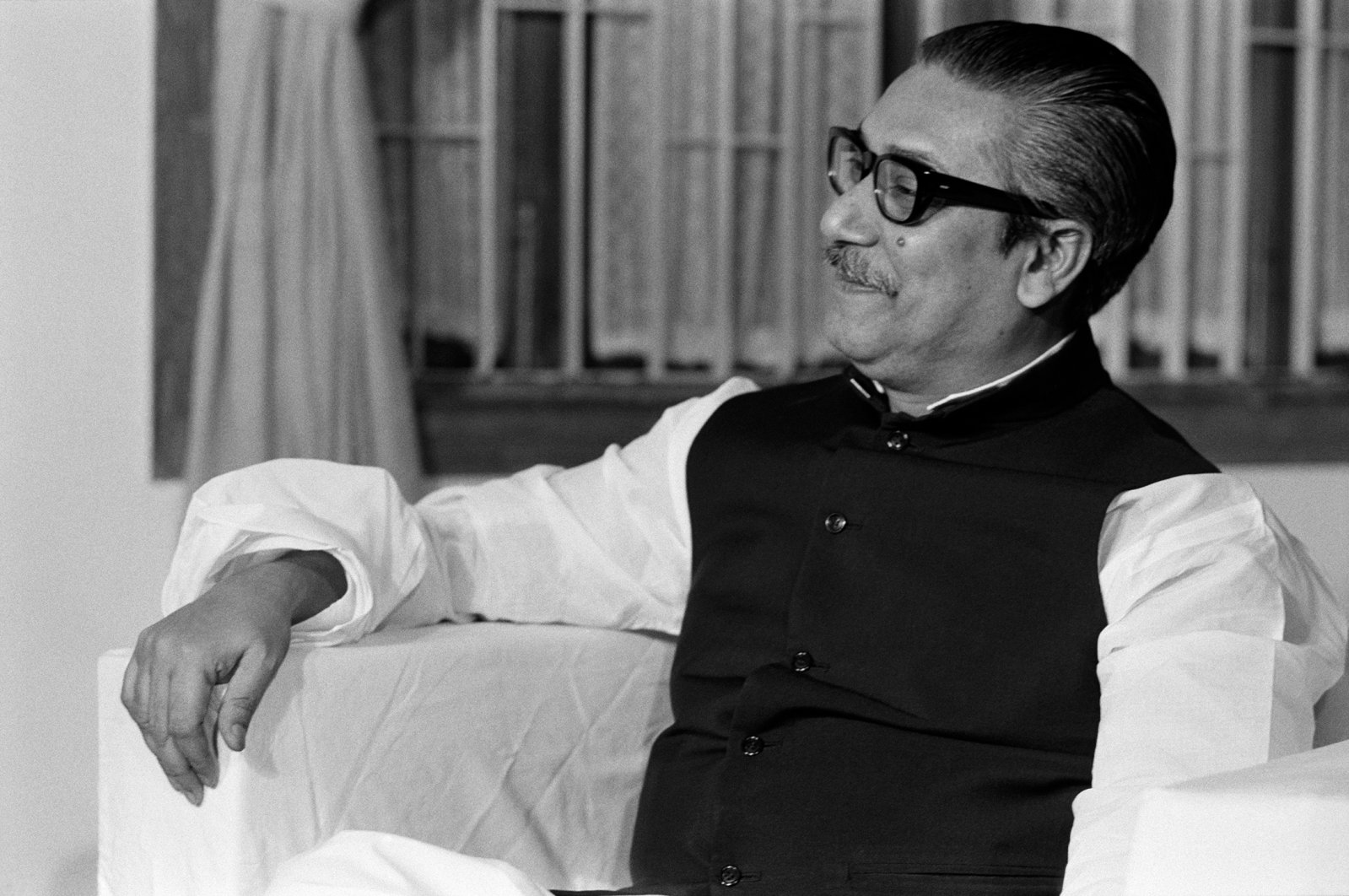 The history of Bangladesh is long and eventful. East Bengal was always well known for its monasteries and seaport, for its exquisite muslin fabric and its brave seafarers. But East Bengal languished in servitude, and her masses were oppressed. This was to all change with a man who was born in the rural heartland of East Bengal in 1920. The Bangladesh story is the story of a man named Sheikh Mujibur Rahman who loved the masses of East Bengal and who sacrificed his life for a country he had named "Bangladesh."

Bangabandhu was a genuine people’s leader. It was his love for his people and empathy for his people’s suffering that made him strive for their freedom. The sacrifice and contribution of Bangabandhu for the independence of Bangladesh are incomparable. A visionary, Bangabandhu valiantly led the nation in every single movement inter alia:

The Pakistani occupation forces launched a brutal military operation on the innocent Bangalee civilians on the night of March 25, 1971. Bangabandhu declared the independence of Bangladesh in the early hours of March 26, 1971, and an all-out guerrilla war began against the Pakistani oppressive regime. In his declaration, Bangabandhu said "this may be my last message. From today Bangladesh is independent. I call upon the people of Bangladesh, wherever you are and with whatever you have, to resist the army of occupation to the last. Your fight must go on until the last soldier of the Pakistan occupation army is expelled from the soil of Bangladesh and final victory is achieved.”

Just after his declaration of independence, Bangabandhu was arrested from his residence at Road 32 Dhanmondi in Dhaka and subsequently flown to West Pakistan where he was to serve solitary confinement in a jail in Punjab. He was awarded a death sentence after a farcical trial. Far from his home and hearth, Bangabandhu knew that he would be sent to the gallows at any moment but he knew that he had instilled the Bangalee nation with a pride in their identity and he had shaped in them an indomitable spirit to struggle for a just cause.

Bangabandhu remained firm and ever steadfast in his goals. Bangabandhu’s most famous utterance was, “I will say, while going to the gallows, I am a Bangalee, Bangladesh is my country and Bangla is my language. Joy Bangla.” He was indeed the source of the indomitable spirit of the freedom fighters. Following the declaration of independence of East Pakistan, the provisional government of the People's Republic of Bangladesh, popularly known as the Mujibnagar government, was established on April 10, 1971. The goal of achieving independence by defeating the occupation forces and freeing Bangabandhu were the twin dreams that propelled the whole Bangalee nation.

Bangabandhu’s undisputed leadership and the blood and sweat of millions of Bangalees prevailed. Victory was achieved on Dec. 16, 1971. Bangladesh emerged as a free and sovereign nation after the Pakistan Army surrendered in Dhaka at the very Race Course Maidan where Bangabandhu had delivered his historic March 7 speech only nine months ago. Some 200,000 women sacrificed their honor and 3 million people sacrificed their lives for the birth of Bangladesh. It was Bangabandhu’s political inspiration and moral persuasion that made mass people embrace martyrdom for the motherland. The Pakistani rulers were compelled by international pressure to free Bangabandhu. The Father of the Nation returned to independent Bangladesh on Jan. 10, 1972. Bangabandhu was welcomed by millions at the Racecourse Maidan once again on Jan. 10, 1972. Overwhelmed with emotions, he said: "The dream of my life has been fulfilled today. My Sonar Bangla (Golden Bengal) is now free and a sovereign state has emerged."

As described by Sheikh Hasina, the prime minister of Bangladesh and the daughter of Bangabandhu, he dedicated his life to establishing a democratic, peaceful and exploitation-free society called Sonar Bangla. He devoted his entire life to one dream: to liberate the Bangalee nation, which had been groaning under the colonial and imperialist yoke for nearly 1,000 years. Born and raised in the rural heartland of Bengal, he became a relentless champion for the downtrodden Bangalee people. He became the founding father of the sovereign state of Bangladesh.

More than a leader

Bangabandhu is not just a mere individual or a name. He is the architect of a nation – the Bangalee nation. He was the greatest political leader of Bangladesh, the founder of independent Bangladesh, the biggest influence on the lives of Bangladeshis, he was a gigantic personality. But he loved the simple epithet "Bangabandhu" that his people had adoringly bestowed on him. “Bangabandhu” in Bangla, means simply “friend of Bengal.” He continued until his last breath to lead a simple unaffected, unpretentious life. A true son and friend of Bengal, he was the kindred of millions of Bangalees whom he loved dearly and who in turn followed him unhesitatingly.

Bangabandhu was the epitome of courage and selflessness. Even foreign nationals remembered him as a towering figure, a charismatic speaker. A full-blooded Bangalee, Bangabandhu’s physical stature was indeed towering. His voice was deep and hypnotic. His charisma worked charms on people. He had all the makings of a political legend. His political acumen was as strong, as was his intuition. He could read the pulse of the nation like no other. He radiated confidence and instilled courage in people. It was his lifelong devotion to the cause of the toiling masses that made him Bangabandhu. In Bangabandhu, Bangalees saw a leader who fought for peace and prosperity for his country and viewed all people as equals. His unabashed Bangalee nationalism has infused a new vitality and robustness in the age-old Bangalee civilization and culture.

Mujib Rahman is the hero of the Bangalees. He is the symbol of fortitude and emancipation for Bangalees for today and all days to come. This is his abiding legacy. After his death, Bangabandhu was voted the "Greatest Bangalee of All Time" in a survey conducted by the British Broadcasting Company (BBC). The legacy of Mujib will remain entrenched in Bangladesh’s history.

The importance of Aug. 15

As head of the government, Bangabandhu immediately devoted himself to the rehabilitation and recovery of the economy of his war-ravaged country. The tasks were multifarious and very difficult but he was intent on succeeding. Unfortunately, he got less than four years to engage in nation building. In the early hours of Aug. 15, 1975, Bangabandhu was brutally assassinated in his Dhanmondi residence along with most members of his family by a group of scheming defeated forces and misguided army personnel. His two daughters, Hasina and Rehana, survived as they were abroad at the time. The assassination of the founder of Bangladesh had a catastrophic effect on the newly founded Bangladesh. The goals of building a Sonar Bangla, that is a democratic, secular society free from fears and inequalities, were completely destroyed. All the goals and values that Bangladesh had harbored during its war of liberation and had enshrined in its constitution were wiped out overnight. Bangladesh plunged into an abyss of despair.

But the lessons taught by Bangabandhu were not forgotten. Bangalees did not give up. They kept on struggling for establishing democracy and working toward economic development goals. Bangalees have succeeded, and Aug. 15 is now commemorated each year as the National Mourning Day. As the month of August approaches, a sadness descends on the Bangalee people, at home and all over the world. A pall of gloom is cast over the nation in remembrance of the immense sacrifices Bangabandhu had made for the Bangalee nation and for the cause of Bangladesh. Flags are lowered at half-mast, the president and prime minister of Bangladesh deliver messages on the occasion, and people of all faiths offer prayers. Monuments erected for Bangabandhu are covered with flowers. The people of Bangladesh pay their deepest tribute to the greatest leader and vow to nurture his courage and ideology in their hearts.

However, the best tribute that the Bangalee nation paid to Bangabandhu’s memory is working relentlessly and collectively to materialize his dream of the Sonar Bangla, defying all odds. This is the work of vibrant generations of men and women who have not let the blood and sacrifice of the Father of the Nation go in vain. The facts are there for everyone to see: Bangladesh is a thriving parliamentary democracy with a sustained economic growth rate of 7% per annum. In 50 years, the export earnings of the country have gone from $297 million to $45 billion.

The rate of poverty has come down from 70% to 20.5%. The per capita income has increased sixteenfold. From being a least developed country Bangladesh is poised to becoming the 25 largest economy by 2035, according to the U.K.’s Centre for Economics and Business Research (CEBR). According to Nobel Laureate Amartya Sen, Bangladesh is well ahead of its South Asian neighbours in social indicators. This is the result of governmental policies and nongovernmental organization (NGO) involvement. Bangladesh also is home to the Building Resources Across Communities (BRAC), the largest NGO in the world.

The evolution of Bangladesh from a classic debt-dependent, fragile economy to one that has a respectable growth rate and a confident future is not a miracle. This evolution has been possible due to the vision of Hasina.

She undertook the materialization of the dream of Sonar Bangla that Bangabandhu was not able to complete due to his untimely death. Hasina took the country from being a mostly aid-dependent country to a country that depends on its own resources. Singlehandedly, she took Bangladesh into the Digital Age, into the Nuclear Power Age, into the Age of Space Tech. Under her steady and pragmatic leadership, the country has successfully combat terrorism, radicalism and is fighting climate challenges. In the world arena, Bangladesh is regarded as a stable and flourishing young country. It discharges its international obligations, observes international treaties and is respectful of the cultural rights of all people.

During Bangabandhu’s lifetime, he spent nearly one-fourth of his time or a staggering 4,682 days in prison. The assassins’ bullets ended his mortal life along with most members of his family. The heinous attempts to obliterate Bangabandhu and his achievements have not succeeded. Bangladesh has emerged as a confident state on the global stage. Bangabandhu has remained and will remain a lighthouse, inspiring and leading Bangladesh to newer heights.