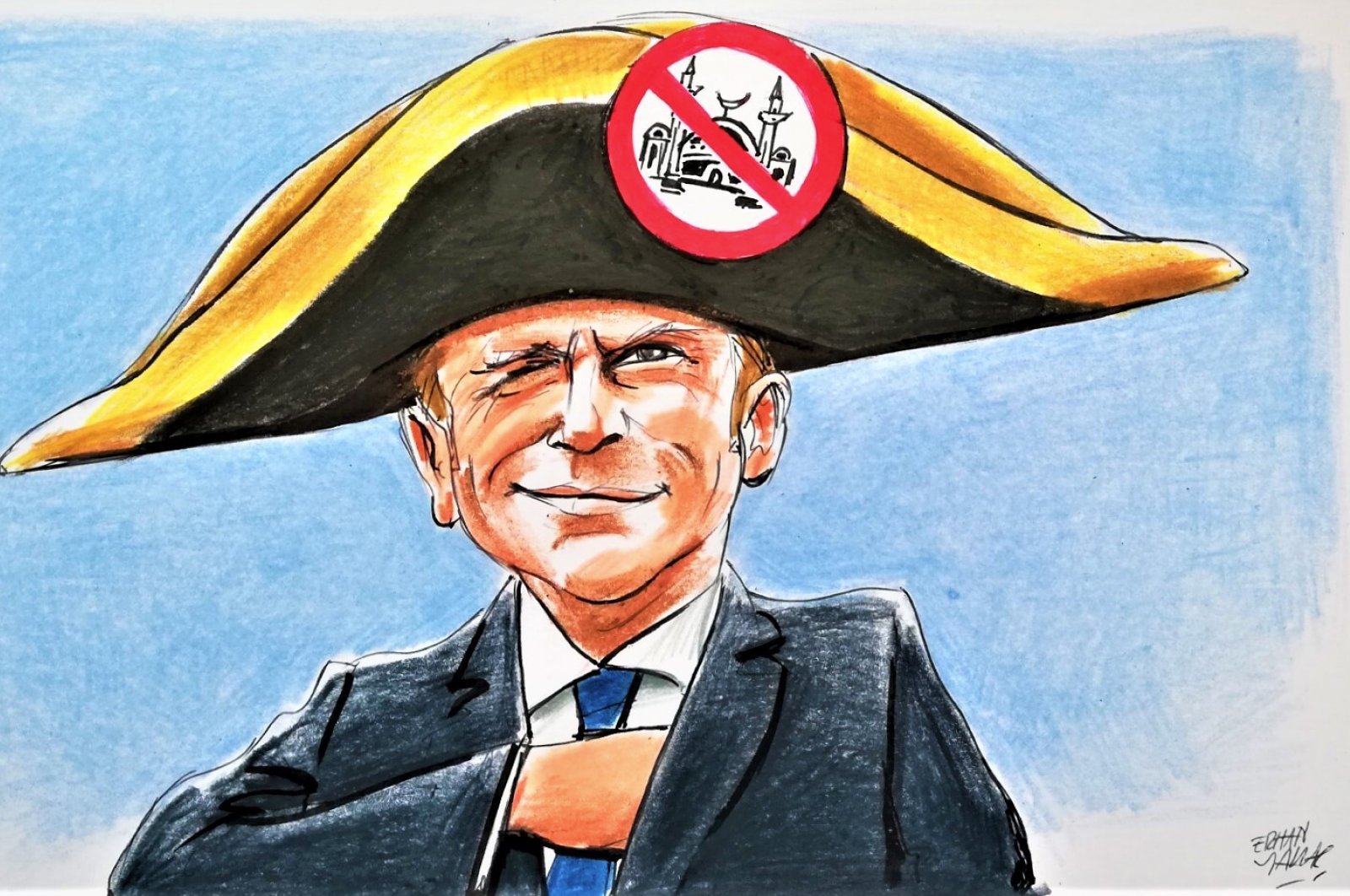 Illustration by Erhan Yalvaç
by Anne-Claire Deschamps Jun 03, 2021 12:05 am
RECOMMENDED

On Oct. 2, 2020, during a press statement, French President Emmanuel Macron announced that they had started a fight against what he called "Islamism."

The goal was presented as strengthening respect for republican values and combating communitarianism. Although it has insistently been pointed out that the “religion of Islam” or "French Muslims" are not the target, in his statement that day alone, Macron used words such as "Islam" and "radical Islam" repeatedly.

Ultimately, the French government submitted a draft to the cabinet on Dec. 9 and the legislative process was initiated. In the text of Dec. 9, it did not appear that any religion or its members were explicitly targeted. However, the government's press release regarding the bill again pointed to just one religion: Islam.

The bill, which was accepted with the affirmative votes of 347 deputies and sent to the French Senate, underwent a great change here as well.

Afterward, because the two houses of the French Parliament did not vote on the same text, a mixed commission consisting of seven senators and seven deputies was established. Yet, this commission could not agree on the text either.

In the next scenario, it looks like both wings will meet again and in the end, the government will wait for parliament to decide.

The most crucial article

In the bill, which could not yet be agreed upon due to the articles that the Senate added, the most important article creating serious public debate concerns the prohibition of the use of religious symbols for parents picking up their children after school, accompanying them on school trips and during national sports competitions.

Although it is not clearly stated, the target group here is Muslim parents wearing headscarves. With the amendment made in 2004, the use of religious symbols in schools was prohibited in France, though parents were excluded from this ban.

Later, this exclusion was supported in practice by various court decisions. It is surprising that 17 years after this law, the question of parents wearing headscarves is still being discussed.

Moreover, since the ban on religious symbols in both chambers of the parliament (including the banning of the full-body swimsuit known as the burkini in public places) is justified on the basis of the perception that Muslim women do not wear the headscarf on their own free will, the government is in fact, violating the "women's rights" it claims to defend.

Another controversial issue in the bill is the article related to education. Homeschooling, which is allowed in the French education system and has been practiced for various reasons, is being reregulated.

While illness or disability is the most common reason for homeschooling in practice, the perception being created in public opinion claims that Muslim families, in particular, lean toward educating their children at home.

However, the question of whether this claim has any factual basis or not is highly controversial.

Another group that the bill will affect the most is undoubtedly nongovernmental organizations (NGOs).

In its current form, the regulation imposes serious financial and administrative obligations on associations established under the laws of 1901 and 1905.

The time given to comply with these obligations is an issue of concern. Failure to allow an appropriate period of time will seriously damage the freedom of assembly and association, many associations will be dissolved or severely punished.

Undoubtedly, on grounds of security and public order, it is important and necessary for religious rituals to be open to the public and audited. However, fuzzy concepts such as "compliance with republican values," which are not clearly defined in the bill, and "compliance with public order," which causes the most excessive use of power in administrative law, are a problem.

Furthermore, after the lawmaking process is completed, the proportionality of the frequency of interventions or inspections remains to be seen in practice.

At this stage, if we look at the statements of the political actors and the perception created by the media on public opinion, we can predict that those who will be affected the most by these regulations will again be Muslim and immigrant associations.

Cultural or religious associations belonging to immigrants, mostly formed by societies that have settled in France due to work migrations, operate in the buildings built by the communities in question, and their management is ensured by the first two generations.

It would not be rational to expect such organizations to immediately fulfill the obligations stipulated in the bill.

On the other hand, the claim that such associations are "separatist" will always be kept on the agenda and their members’ freedom of peaceful assembly will be implicitly suppressed.

Concurrently this bill, which has not been enacted yet, has accelerated the closure of many associations. NGOs operating in France such as BarakaCity and the Collective against Islamophobia in France (CCIF) were closed by a cabinet decision without any court process and without sharing any evidence supporting the "radicalization" allegations with the public, and some Muslim religious associations and schools have already been temporarily closed.

This is just a small preview of what awaits us if the bill becomes law.

The "law" and "human rights" are the main things being ignored in these discussions. The marginalization and labeling of Muslims have gained momentum in French society. The rights of Muslims such as freedom of thought, belief and religion, freedom of assembly and association, the right to respect privacy and the inviolability of private life are not defined and are degraded in the face of "republican values" with no clear boundaries.

In public law, balance is an important element. It is essential for the state to pursue a certain balance in the rules it sets, to try to find a middle way instead of directly imposing prohibitions and it should be in favor of public freedom.

However, it would not be wrong to say that the bill on “Reinforcing the Respect for Principles of the Republic and the Fight Against Separatism” is far from this attitude both with its text and the image it creates in the public opinion.

We will see how France's desire to "live together," which it often expresses, will manifest itself in the ongoing legislative process.