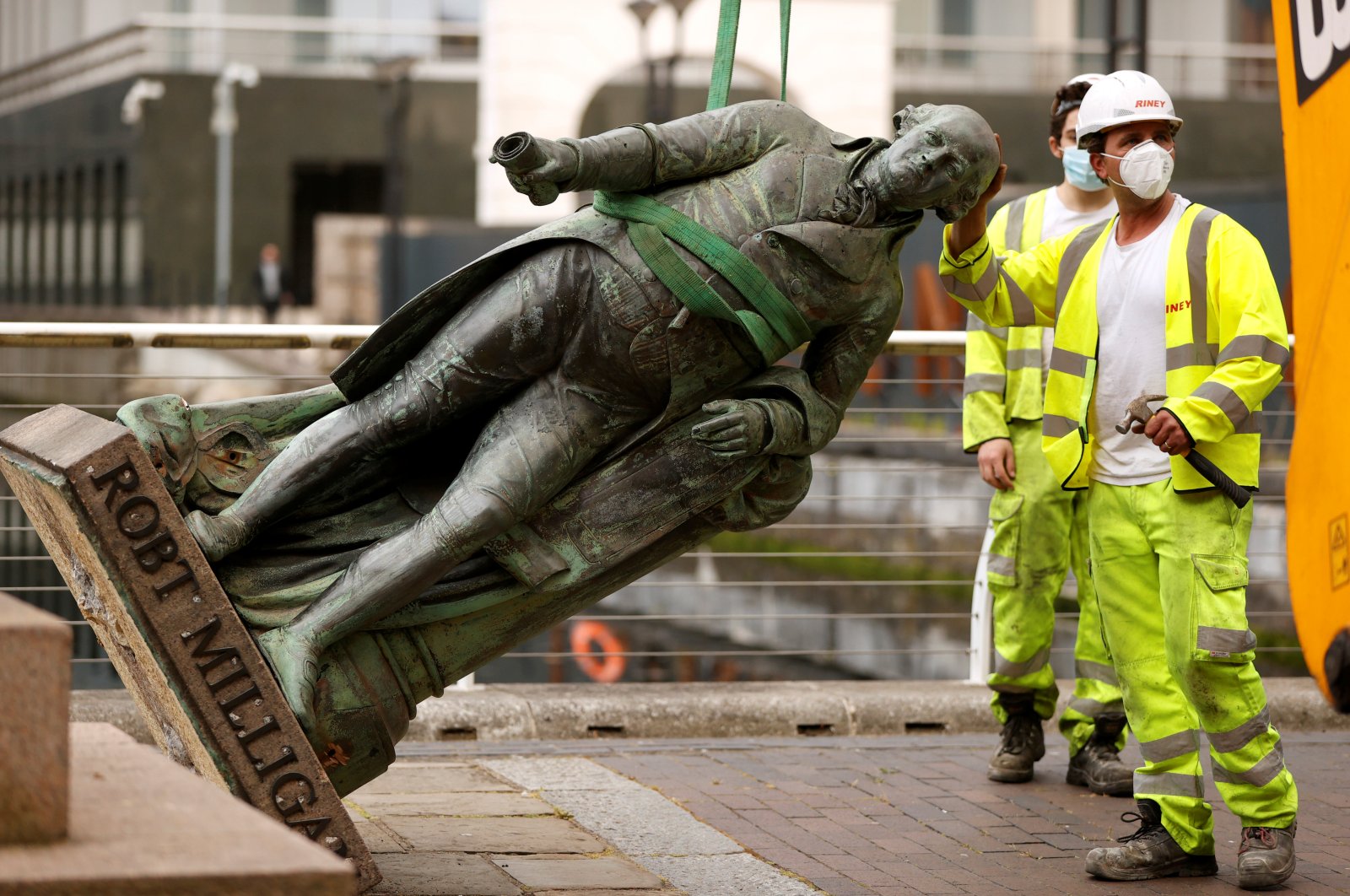 A statue of Robert Milligan is removed by workers outside the Museum of London Docklands near Canary Wharf, following the death of George Floyd, London, June 9, 2020. (Reuters Photo)
by Irfan Raja Jun 12, 2020 12:05 am
RECOMMENDED

Like America and Europe, Britain is also rocked with anti-racist protests, campaigns of removing statues of slave traders, strikes, knee-down events, solidarity meetings, calls to boycott Sainsbury, removing films from the BBC iPlayer and the storming of Twitter hashtags #shutdownacademia #ShutDownSTEM are all part of celebrating #BlackLivesMatter grand victories.

People are toppling statues, one after another in London, Bristol and several other European cities, while calls to remove several others get louder. The New York Times reports, “Statue of Leopold II, Belgian King who brutalized Congo, is removed in Antwerp,” echoing calls to remove several similar monuments in European cities, such as those of Oliver Cromwell and Cecil Rhodes in the U.K.

A long list of “racist statues” that need to be toppled in England, Scotland and Ireland is floating around on social media and in sections of the press. So where will it end?

The point is, by removing slave traders and colonialist statues can we halt the modern slave trade that is happening right under our noses? What about sweatshops in Britain? Make sure to watch “Child Labour for Shimmering Cosmetics.”

European manufacturers pay laborers peanuts in India, Bangladesh, Pakistan and Africa and then sell their goods at diamond-like costs. What can such exploitation be named?

Yet another uncomfortable truth is the growing number of “sex slaves” in Britain and other European cities. Well, people have been tolerating it, and presumably, they will continue to do so even after the statue removal campaigns.

How about human trafficking as modern-day slavery? It’s an organized industry that exploits millions of girls, women, men and children for various disgraceful means such as drug smuggling, forced marriages and shameful acts. Anyone can read The Guardian section, “Modern-day slavery in focus.”

Europe's illegal wars, invasions and support of undemocratic governments that allow its large corporations to exploit people in developing countries for cheap labor are prime reasons for increasing “human trafficking.”

In Britain, takeaways and other small businesses including bedding factories, construction companies and farmhouses pay migrant workers as little as 4 pounds ($5) per hour. What would you call it? Modern imperialism and modern slavery.

To understand modern imperialism and modern slavery, it is essential to briefly look at modern phrases. No one says, for example, “I shot my dog” instead of “I put my dog asleep.” Countries uses phrase like “Operation Enduring Freedom” and “Operation New Dawn” instead of war, invasion or attack. At Tesco in the U.K., they even use the modern term, shrinkage, instead of stealing or thieving.

Think of old-fashioned English versus modern English. People in power, political and business elites, have invented new phrases to cover up and carry on their same old exploitations.

It’s something that George Orwell told us decades ago in his ever-cited essay, “Politics and the English Language.” One of his quotes reads: “Political language is designed to make lies sound truthful and murder respectable and to give an appearance of solidity and pure wind.”

The same old imperialist powers have changed their costumes, and now they wear modern fashionable clothes. John Pilger’s “The New Rulers of the World,” David Harvey’s “New Imperialism” and Walter LaFeber’s “The New Empire: An Interpretation of American Expansion, 1860-1898” are three popular books that explain how the old masters have become in charge of new businesses.

In the past, these powers looted, stole and committed mass slaughters while using social and class divisions that we remember today as the “divide and rule” strategy. No shame no gain!

We have heard stories of imperialists looting gold, diamonds and other natural resources, including food during the world wars, from India and Africa. So what has changed? Have Britain and other colonial powers like the Dutch, French and Italians become good guys?

Today, the same imperial powers exist, perhaps being even more potent, as they have adopted decent methods of larceny in underdeveloped countries' wealth and natural resources.

Think of the infamous, counterfeit and deceptive Iraq War on the pretext of “weapons of mass destruction” that destroyed a whole country. It’s all about getting the oil game!

Look at The Guardian headline “Trump’s plan to seize Iraq’s oil: ‘It’s not stealing, we're reimbursing ourselves.” So what is it that America is reimbursing in Iraq? Oh yeah! America and Britain helped the Iraqis get rid of the same bad guy to whom they supplied weapons to deal with the Kurds. This is a truth, and no one feels shame about it because the weapons trade is now big business.

Today, modern imperialists create and support wars in faraway places in the name of freedom, liberty and human rights. For example, most conflicts in the Middle East and Africa involve local groups, warlords and missionaries, all trained, equipped and funded by foreign investors, usually the past's imperialist powers.

The John Bew article, “The tragic cycle: western powers and the Middle East,” is one of a series of opinion pieces that explains the story of modern-day slavery and looting in the Middle East.

One after another, oil-producing countries are falling into the traps of the former-imperialist Western powers. Think of Iraq, Syria, Libya, Afghanistan and many other places in Latin America and beyond. Better still, read Lutz Kleveman’s book, “The Great Game: Blood and Oil in Central Asia.”

The Western powers, Russia and China are now competitors for the world's energy resources. These nations have turned Syria, Libya and other resource-rich countries into football grounds.

Here is a list of the 10 most reliable books for understanding how the Middle East became a battleground for the new imperialists.

A decade ago, John Gray wrote, “Those who control oil and water will control the world.” He warned: “The struggle is no longer focused mainly on central Asian oil. It stretches from the Persian Gulf to Africa, Latin America, even the polar caps, and it is also a struggle for water and depleting supplies of vital minerals.”

Gray was right. Today, almost all conflicts have the common objective to secure “pipelines” whether it is in Afghanistan, Central Asian states, the Middle East, Central America or beyond.

Modern imperialism works in a fashionable way; it installs and supports dictators and authoritative dummy rulers in underdeveloped countries. In addition, modern rulers use the World Bank and the International Monetary Fund to sanction high-interest loans to poorer nations with terms and conditions that are often unbearable.

Modern imperialists take the wealth of underdeveloped nations in a sophisticated manner that is often termed financial aid, certainly not stealing or looting.

To further understand, watch the documentaries, “Stealing Africa: Why Poverty” and “Fight for Oil: 100 Years in the Middle East.” Once a war is over, modern imperialists have public relations, service, consultancy and building companies, and nongovernmental organizations such as the Rand Corporation help underdeveloped countries in yet another cultured way of robbery. Sorry, I mean "help." So what do you think of modern slavery? Will it end by removing statues?