Could Macron be the real winner in the post-Merkel era? 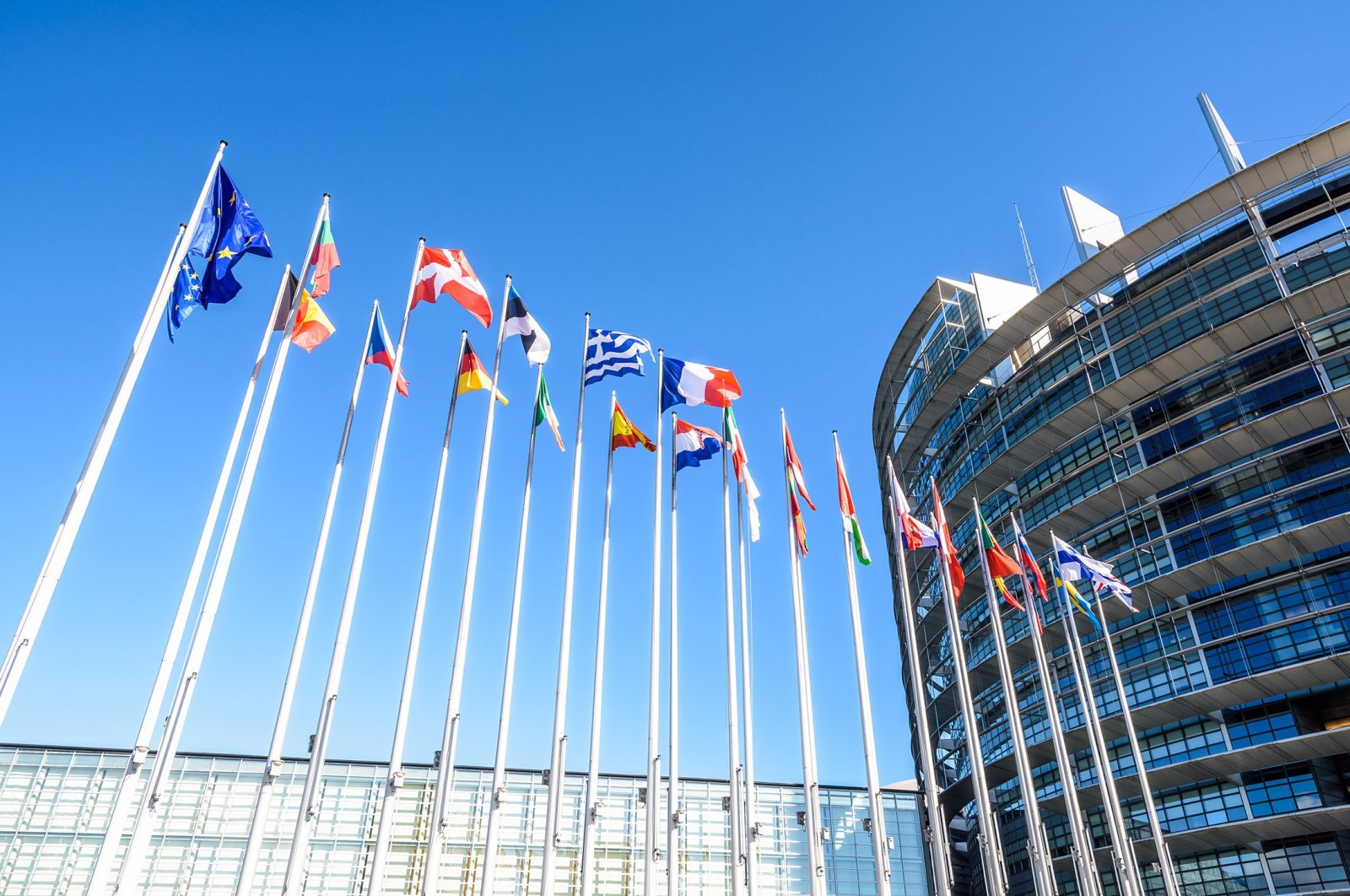 Flags of the member states of the European Union fly in front of the entrance of the Louise Weiss building, the official seat of the European Parliament in Strasbourg, France, Sept. 13, 2019. (Shutterstock Photo)
by Klaus Jurgens Sep 21, 2021 12:05 am
RECOMMENDED

With Chancellor Angela Merkel on her farewell tour – with a highly publicized stop-over in Paris, of course – much speculation is in the air with regards to how bilateral relations between Germany and France are going to develop once a new leader is at the helm in Berlin after Sept. 26. Always a special and much cherished kind of liaison, Paris might consider being in the driver's seat once again. In other words: Will French President Emmanuel Macron be the real winner of the German vote?

'The engine of Europe’

Let us put Franco-German ties in perspective. One misconception is that, since the modern democratic Federal Republic of Germany was established in Bonn (and then, later, in Berlin), the country has basically managed European political affairs on its own. In particular, commentators not based in either France or Germany tend to refer to Germany as "the engine of Europe." Granted, decade after decade post-war Germany has become a role model nation with regards to peaceful international cooperation. Initially regarded as a semi-sovereign state, Germany eventually managed to transform itself into a fully sovereign nation-state, which to a large extent was possible due to its constantly pushing for further European integration and thus constantly increasing its own positive reputation among fellow European capitals.

Being that the above-mentioned "engine of Europe" greatly facilitated this transformation. But to assume that there were no other players involved in shaping today’s 27 member state European Union is a serious error of political judgment.

From the very beginning of post-war peaceful coexistence until this very day, Paris held the key to what is possible and what is not. As a matter of fact, it took Germany quite a while to understand the inner workings of first the European Economic Community (EEC), then the European Commission (EC) and finally the EU. Three reasons for this must be presented:

While a number of smaller institutions were given to Germany and Italy, in principle we can detect a clear dominance of Francophone influence. To better understand this point, one only has to take a look at the distribution of public servant roles. Even if a leading personality in the administration originally hailed from Hamburg, for example, almost all of his or her local office staff would be sourced from the place where that institution is based. Luxembourg? Mostly French speakers in public life. Strasbourg? Apart from its closeness to Germany, the city remains a distinctly Francophone location.

Brussels? Nicely divided into Flemish and, indeed, French speakers easily reflected in the allocation of "local" EU support jobs. Then consider this: Each and every official legal document was initially drafted in French, then English and German. Can you imagine the advantage of being a fluent French speaker shaping policies both in Brussels and Paris?

Second, not just the seats of the major institutions or the dominance of the French language when it comes to local support staff, ranging from drivers to office managers, allowed Paris to gain at least an unwritten rule of linguistic dominance. The entire European bureaucracy was fashioned after the French model, which can best be labeled as hierarchical.

If explained in a drawing, we would make use of a pyramid. It is the antithesis of lean management, or horizontal management, where tasks are more evenly allocated. It is a system totally unfamiliar in post-war Germany – for good reason. This in turn enabled candidates from Francophone countries to more swiftly pass the civil service exams as they better understood the inner workings of the EC.

And third, with all this in mind, it is relatively easy to not simply influence day-to-day affairs but to devise the actual broader frameworks and policy-making guidelines, too. Let me give you two examples, one big, one small.

We will start with the latter. When the EC agreed to invest in a new youth exchange program enabling Europe’s youth and student movements to benefit from travel and cultural activity grants, the majority of member states preferred an easy-to-sell, thus easy-to-remember, acronym. At stake: YES, or the equivalent of Youth Exchange Scheme. In favor: Most, including Berlin. Against? Paris.

Was France not interested in funding youth exchanges? Far from it – it was just that the name sounded all too English. Much wrangling behind closed doors at the Hanover EC summit resulted in France getting the linguistic upper hand. The program was now called "Jeunesse pour l’Europe," or "Jugend für Europa" in German. Was this easier to sell to the younger generation? Hardly, as it sounded overly philosophical and no one would know what it is all about.

Back to the former example: German reunification. Although in principle an internal German topic, it was of course highly politicized. The European dimension was clear: overnight an existing member state would increase its population dramatically, thus increase the EU’s population by law. Besides, was it not dangerous to allow Germany to regain so much stature and power so quickly? In other words: Who was afraid of a new German superstate, even if it was to be fully democratic? The answer: many, but mostly France.

Clever lobbying on Bonn's part changed all that, and Paris eventually shrugged off its worries, and Germany was reunited again. But we must be clear: should Paris not have agreed to German unification, it would perhaps not have been shelved but would have been seriously delayed.

Now all that is bilateral history, Europe and the world have moved on. We find ourselves in a post-Brexit, hopefully soon post-pandemic reality. What people thought could never ever happen occurred indeed. This allows leaders to start thinking out of the box, too.

For Macron, three issues could determine whether he would wish to see France taking over EU control ever more so.

First, whoever wins in Germany a week from today will have to start the tricky business of coalition building. There is the subject of how to finally beat the coronavirus. There is growing concern about far-right extremist viewpoints openly aired in public.

With Macron not facing the electorate until April of next year, he could fill the German void, so to speak, and suggest far-reaching policies. One of them could be to rekindle efforts to allow the EU to have a fully fledged foreign and security policymaking apparatus. Just as Germany gained a global reputation by being a model EU member in the past, France could rewrite EU history by turning itself into a regional, and perhaps even globally accepted player.

Second, with Britain having departed from the EU's shores, both literally and figuratively speaking, France might just as well plan to step into the ring and assume a more assertive national as well as international role. This in turn would help to further cement France’s standing among fellow EU member states, including Germany.

And last not least, whoever wins on Sept. 26 in neighboring Germany, no candidate has considerable expertise in EU affairs and, let us be frank, in Franco-German relations. Perhaps some time spent recharging bilateral batteries while France pushes for greater EU impact could help the bloc to move forward, too. In any case, all eyes are on Berlin next weekend – and on Paris for April 2022.