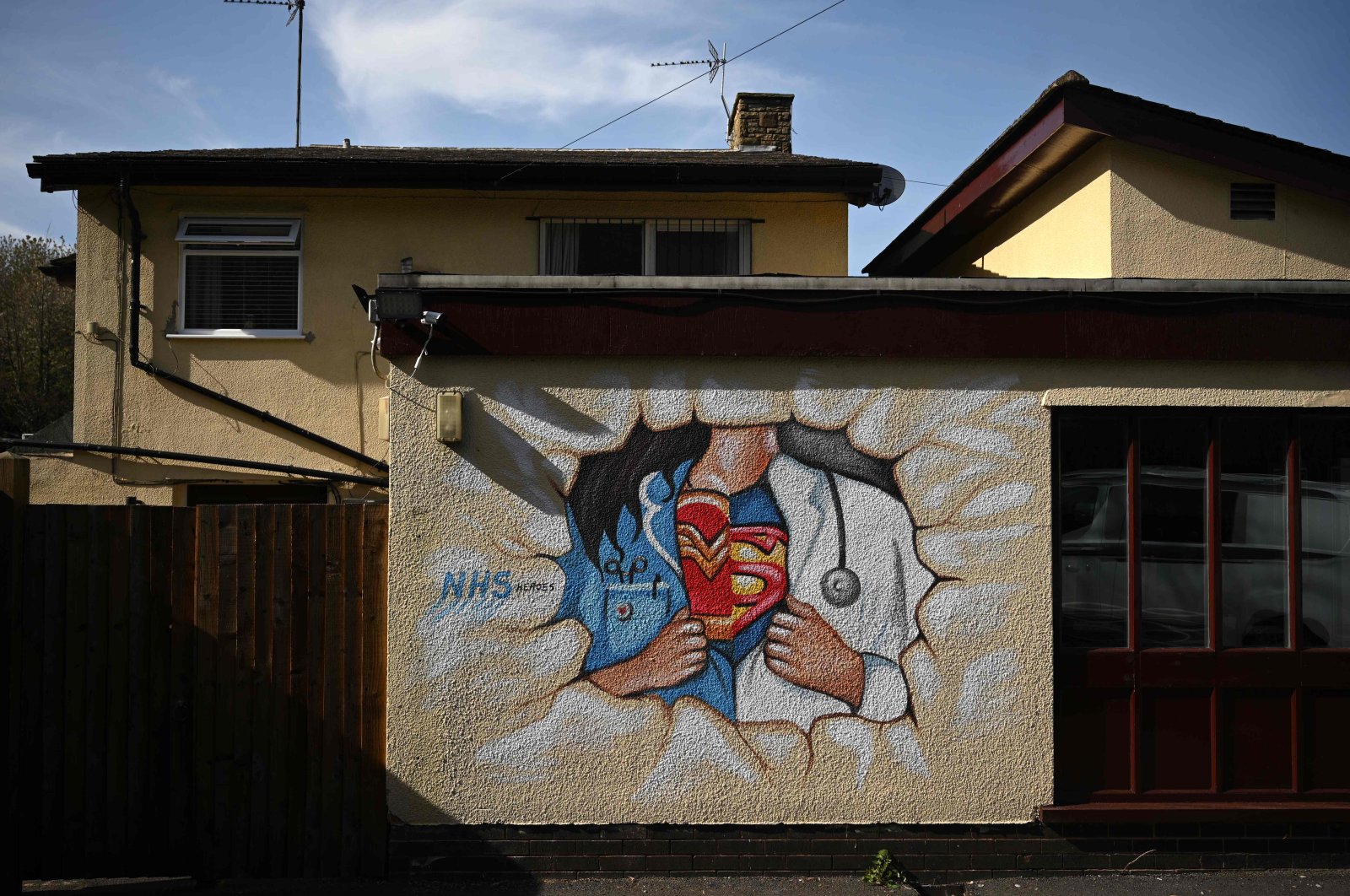 Graffiti depicts the badge of a superhero concealed under a nurse's and doctor's uniform in homage to the efforts of NHS staff during the coronavirus crisis on a wall in Pontefract, northern England, April 14, 2020. (AFP Photo)
by Emrah Atar Apr 17, 2020 12:05 am
RECOMMENDED

Since the beginning of the new year, the world has woken up to a new chaos every day. One of the most challenging problems facing the world today is COVID-19. By the time this piece is published, more than 2 million people will have been infected with the virus with over 135,000 casualties. This pandemic is a reminder for everyone about the fragility of life. The pandemic has brought fear, uncertainty and loneliness to our agenda out of the blue. This epidemic also reminds us that the virus does not discriminate between caste, color or status – anyone can get it no matter how powerful or wealthy. Powerful states have become needy and desperate in the face of the virus, with previous notions of freedom forgotten.

The World Health Organization (WHO), in fighting COVID-19, has been issuing warnings from the outset and sharing its responsibilities and plans with the countries' health ministers. All eyes across the globe turned to Europe after the WHO announced that Europe had become the "epicenter" of the pandemic. Many European countries, however, acted too late and too slowly to take the necessary measures to prevent the spread of the pandemic, which resulted in severe damage to the national health systems in Italy, France, Spain, the U.K., and many other states. As the WHO has no power to force countries to take measures, states and citizens carry a significant responsibility in the fight against the pandemic

The case in the UK

The U.K. can be seen as a case in point. The U.K. had set out with the rhetoric of "I am not from this world, I do not follow the protective policies of countries, and I will follow a very different path." Prime Minister Boris Johnson had initially announced that extraordinary measures would not be taken to stop COVID- 19. The late implementation of measures such as a ban on gatherings, closure of schools and implementation of travel restrictions have made it clear that the U.K. is incapable of fighting COVID-19 properly. It has wounded the already crumbling health system infrastructure.

At the time this piece was written, nearly 100,000 people were infected and nearly 13,000 people had died in the U.K. The British government's failure to take the necessary steps at the right time leads us to believe that the U.K. will reach perhaps the highest number of infections in Europe. The first case was detected in the U.K. on Jan. 31, 2020. The absence of cases in the U.K. for an extended period after the first cases were detected is a critical factor in the country's failure to implement new measures. As can be seen in the table, the increase in the number of cases is expressed in thousands per day. In addition, Johnson ignored the warnings and contracted the virus after coming into close contact with COVID-19 patients. Prince Charles also tested positive but remains in good health.

Initially, the government had focused on two primary principles: keeping the virus under control and delaying its spread. The government wanted the public to get infected and boost their immunity, also known as herd immunity. The first coronavirus action plan announced by Johnson had been "Level 4." After the WHO declared the outbreak as a pandemic, the government raised the risk level from moderate to high. With the number of cases in the country and the death toll rising to high levels, the intense public reaction and the government's understanding that these policies were not sustainable, the government decided to change its policy to tackle COVID-19.

Johnson declared a partial curfew or lockdown (with no sanctions or enforcement) and announced that schools, colleges, nurseries, restaurants, bars, cafes, cinemas and theaters in the U.K. would be closed temporarily.

The U.K. government announced that it will pay 80% of wages of up to 2,500 pounds ($3,120) a month for employees who were not working during the coronavirus outbreak, with many conditions attached.

The coronavirus outbreak has caused the country's health system to come under fire yet again. Tens of thousands of retired medics have been asked to return to the NHS as there are not enough doctors and nurses across the country to tackle the pandemic. Furthermore, the U.K. government will recruit up to 250,000 volunteers to support the NHS in its fight against coronavirus.

Most importantly, stay-at-home warnings have been issued in the country. People will only be able to leave their homes for purposes deemed essential: to shop for basic necessities, to exercise, to meet any medical needs and to travel to work, if necessary. All gatherings of more than two people in public – except people with whom you live – have been banned.

The government's policy change has been welcomed by the citizens. However, many, especially in London, are not following the rules, which is causing many adverse reactions. If this continues, a mandatory quarantine may be implemented soon.

On the other hand, COVID-19 has become a reason for many to stay home and place more emphasis on personal hygiene and home cleanliness than ever before. However, have you ever thought about the homeless forced to live on the streets? Yes, the four countries in the U.K. today have over 250,000 homeless people. There is another group of homeless people, those known as "rough sleepers." According to data from the U.K. council, almost 25,000 people slept rough in 2019. They are the most visible and vulnerable class experiencing homelessness and most likely to suffer from respiratory and other health conditions.

Rough sleepers have been hit particularly hard by this pandemic. The problem of social distance is a paradox for the rough sleepers as their livelihood depends on being around people. They depend on others for most basic needs like food and water. Even today, an increasing number of people who are struggling for money because of the COVID-19 crisis are turning to charities that distribute food discarded by supermarkets. Due to their contact with hundreds of people every day, they are more likely to contract the infection and transmit it to others. People on the streets suffering from pre-existing health conditions with nowhere to wash their hands and struggling to self-isolate themselves could be a major factor contributing to the increase in the total number of cases in the U.K.

Measures taken to combat coronavirus are likely to have a significant impact on the lives of homeless or rough sleepers, yet no significant decision has been taken at the government level. A number of organizations across the country helping the homeless have closed their doors because of the pandemic. Many hotel beds have been offered to rough sleepers to help protect them from the coronavirus, which is inadequate because more than 45,000 beds are needed to overcome this problem in the country, which underlines the need for a rapid response.

COVID-19 ought to be an opportunity for people and governments to take time to consider the importance of safe shelter, where people can enjoy the most basic human rights. In this context, the needs of those forced to live on the streets need to be better met, and an action plan is needed for those who test positive but are without shelter.

An official task force must be set up to deal only with the homeless people in local areas. It must be official because volunteers are forced to stay at home and public gatherings have been banned.

A local needs analysis should be conducted based on demographic intelligence that includes the nature and location of homeless and rough sleepers.

Self-isolation is a crucial task for everyone during the pandemic. By keeping an eye on the cases of infection, particular locations should be determined for the homeless to help them self-isolate.

The failure of the British government to take timely and adequate measures in response to the COVID-19 outbreak is likely to cause the number of cases in the country to climb even higher numbers in the coming days. The negativity and inadequacy of the health system throughout the country are seen as the biggest problems. In addition to the fact that the health institutions in the country are outdated and inadequate to combat the coronavirus outbreak, the lack of specialized medical personnel in these facilities can be cited as the most critical problem for the country. The health systems of the country are being questioned at the forefront of the struggle against these types of outbreaks. The health field in the U.K., by itself, has been a considerable problem and its reform was among the election promises of the prime ministerial candidate in the last election.

To conclude, COVID-19 infections are on a decline in China, however, the world is still in danger. Even though there are many lessons to be learned, scientific advances have helped us understand that people could limit the adverse impacts of pandemics by taking the necessary precautions; furthermore, the state must assume primary responsibility for the welfare of its citizens, especially of those in need.

As a final word, global solidarity in the face of the COVID-19 outbreak has failed, and no globally viable plan has been put forward. If the WHO desires to succeed against COVID-19, it must assume a more functional role, develop a global policy and impose its implementation on countries more firmly.