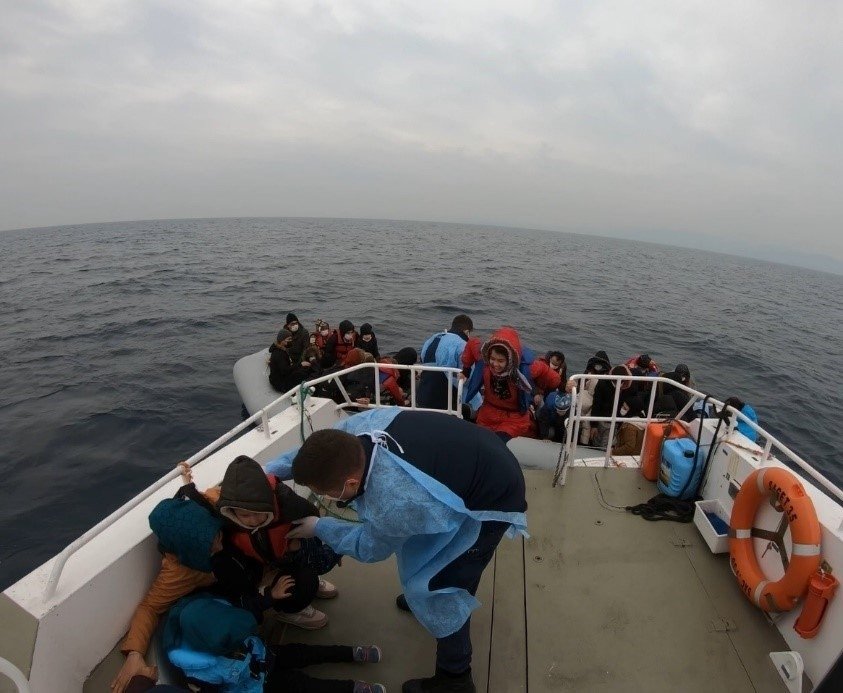 Imagine you are in a small inflatable boat middle of the high seas with many more innocent women, men and children desperate to reach safe shores, fleeing from persecution and war, headed for a better future without fear for your own life.

Yet the final nautical miles of a long journey over land and by sea turn out to be as dangerous as every minute in their former locations besieged by war, poverty and human rights abuses.

No refugee, no migrant, no person under stress leaving their beloved homelands and often other family members behind, where war or anarchy rages thinks that crossing to Europe is a Hollywood-type experience with a guaranteed happy ending.

Yet, the least they can expect is human and moral decency once they are almost there.

And then catastrophe happens, like an unexpected thunderbolt out of nowhere while you are stuck on an ocean: The coast guard of a supposedly model democracy, a proud country that suffered greatly under a seven-year military dictatorship before coming out on top turns you back, with violence if need be, while still being afloat.

Your dreams are shattered even before you set foot on that state’s soil and were it not for the Republic of Turkey coming to your rescue, you might just as well have drowned.

"Shocking" is an understatement. "Criminal" is perhaps the more appropriate term to be employed.

Enter Frontex. The moment the European Union’s external borders agency would notice such a grave violation of its statutes and internationally accepted legal standards by one of its member states – Greece in this case, and in particular if one or more of its patrol ships or airborne surveillance crafts are nearby – it must act immediately coming to the rescue of those vulnerable people.

It sounds logical, is easy on paper and it is in line with the high moral grounds Brussels is constantly declaring the EU is operating according to. Yet as we have known since October 2020 when the scandal first broke to a wider audience, Frontex rather gold plates, or shall we say whitewashes, its actions no matter what.

"Leave the scene," said Greek authorities, yet Frontex did not. Last October, the German news magazine Der Spiegel broke the story: Frontex was supposedly involved in six illegal pushbacks in a sense of having knowledge about five and active involvement in another one.

One month later in November, a brand-new headline read "Illegal pushbacks in the Aegean – How Frontex boss Leggeri deceived the public" (my own translation) when on Nov. 26 further details were made available.

Referring back to the original story which came out jointly with media platform Lighthouse Reports, Bellingcat, German TV station ARD and Japanese station TV Asahi, now a new sensational detail was added: It was claimed that Fabrice Leggeri had at least active knowledge about one of those six cited pushbacks.

Since May 8 and according to an internal Frontex document, Leggeri was aware of the situation.

Der Spiegel then mentions "Serious Incident Report" number 11095 in which Frontex’s own staff noted that during the night from April 18 to 19, 2020, 30 migrants were illegally taken out of Greek waters by Greek coast guard members and left then in Turkish waters.

A Frontex surveillance plane monitored the situation near the island of Lesbos. Greek authorities asked Frontex repeatedly to leave the scene, which they refused, hence the precise nature of the event was recorded.

According to those internal documents, the Greek coast guard lifted the migrants out of their vessel into a coast guard ship, then at 2:37 a.m. put those innocent people into an inflatable boat without any motor and finally towed the dingy into Turkish waters where it was abandoned.

Leggeri wrote to the Greek authorities about what had happened so he was aware of it, although many weeks thereafter still referring "to an incident" without giving further details to the parliamentary committee of the European Parliament in charge.

The topic never disappeared though and a concerned public supported by ongoing media interest followed events.

Those who took a look at Frontex's very own website on the same day (Nov. 26, 2020) saw the announcement of establishing a Management Board Working Group besides other issues had the goal to "looking into allegations of so-called pushbacks in the Eastern Mediterranean."

An inquiry was decided upon and since early this month, March 2021, we know that Frontex did not find any evidence of "illegal" pushbacks. In its own wordings again, Frontex says "no third-country nationals were turned back" after examining eight of by now 13 potential "incidents."

So the top of Frontex knew about allegations and of course knew about its very own "Serious Incident Report" yet claimed to the public for an extended period of time it did not.

Why in the first place?

After a number of name changes, Frontex in its current structure was set up in 2016 as the European Border and Coast Guard Agency. In principle, it is there to oversee European border management.

Very noteworthy in this context is that its very own statutes claim it operates in line with the EU’s fundamental rights charter.

As the European Communities became the European Union and as a border-free travel zone called the Schengen Zone was created, Brussels decided it was time to better control the bloc's external borders.

One can argue that freedom of movement within the EU’s own borders resulted in setting up more of a fortress Europe with watertight external borders. It reflects on the decades-old debate about whether the EU should deepen itself first, widen itself first or find a middle way.

In principle, controlling one's external borders makes sense, naturally. And as the EU has many external sea borders, one sentence out of Frontex's own statutes is vital: Frontex coordinates and organizes joint operations and rapid border interventions to assist member states at the external borders, including in humanitarian emergencies and rescue at sea.

Perfect one might conclude. So how come the pushbacks – they clearly did happen as the migrants had to eventually be rescued by the Turkish coast guard and were not an imagination of sorts – were not automatically reported to the current 27 Frontex member states and the European Parliament? How come it was investigative journalism that brought the truth to the light of day?

Granted, Greece is one of those current 27 Frontex member states. Yet if Frontex has any usefulness it is there to assist those states in patrolling its external borders.

But there is a fine line: On the one hand, we talk about patrolling external borders, preventing illegal entry – for example at an airport – preventing the threat of terrorism based on active intelligence or by monitoring a particular situation.

On the other hand, we speak about tolerating the pushing back of an inflatable boat full of innocent women, men and children.

Here we are faced with the dilemma of what constitutes patrolling external borders and preventing a threat to the entire EU, and working according to the principle of defending human rights and coming to the rescue of anyone in an emergency at sea found in the EU’s territorial waters.

Neither the "Serious Incident Report" published in parts by Der Spiegel and others, the fact that Frontex management for too long denied its very existence nor the recent publication of Frontex internal inquiry findings made what happened disappear.

Those migrants were pushed back and no one in Brussels’ corridors of power except for a small number of members of Europe's parliament tells this openly to Athens.

Thus written, Frontex with its unique structure is accountable not to the European Commission but only to its member states governments and the European Parliament.

It is in principle the EU’s external business card so to speak.

As Turkey constantly and graciously and proudly comes to the rescue of towed or pushed back migrants found in Turkish waters, the world and ever more so in the post-pandemic reality where international solidarity will matter more than ever before takes note.

A simple resignation at the helm of Frontex would in all likelihood not amount to much change – a complete overhaul of its management operations and its overall day-to-day functioning is at stake.

Besides and to end this analysis, when will the European Parliament and a majority of Frontex member states finally pull the plug when human rights violations occur in the name of safeguarding the EU’s external borders?