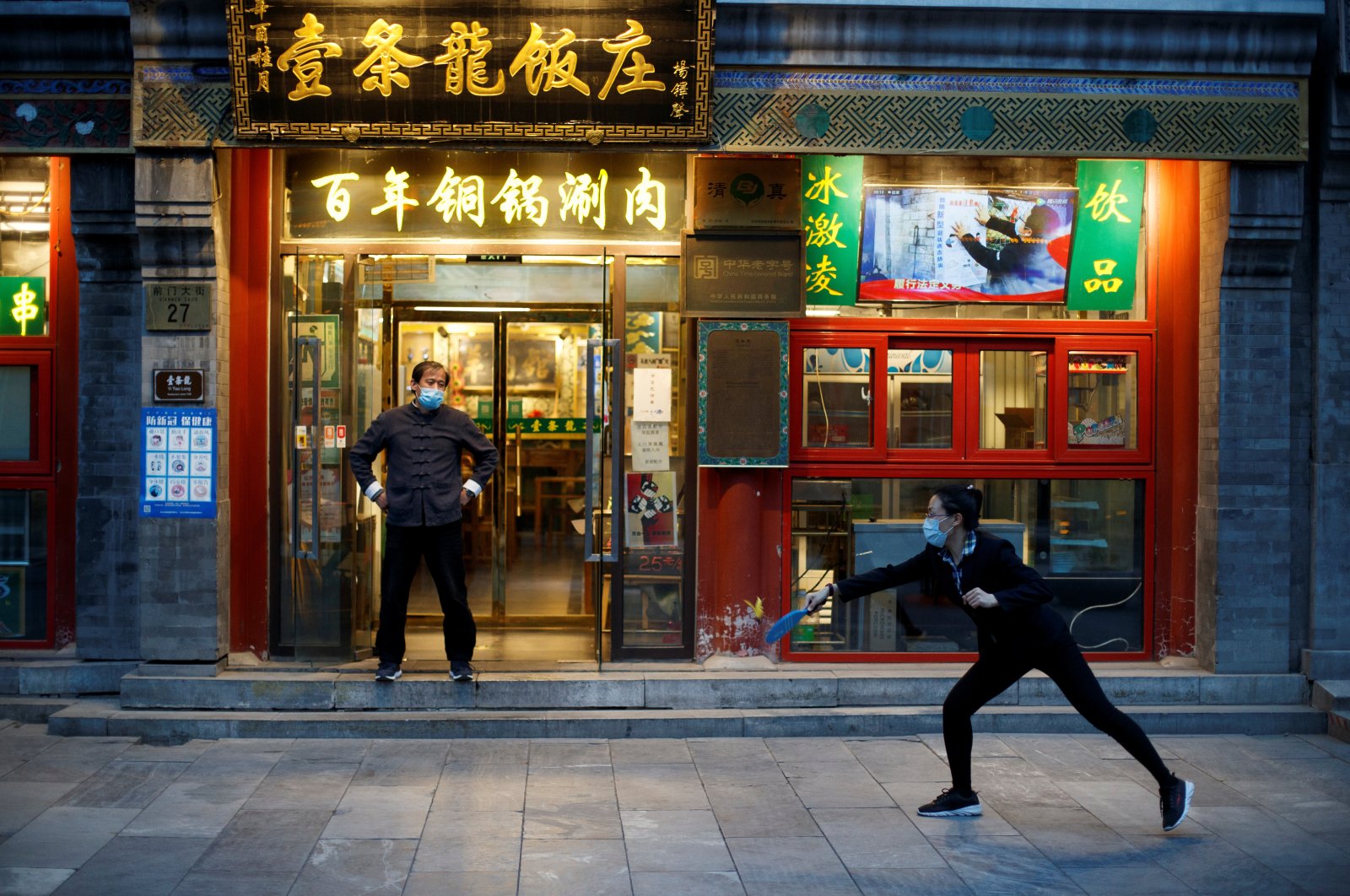 Staff play badminton outside their restaurant in the Qianmen district, one of the top tourist destinations in Beijing, as the coronavirus outbreak continues in China, April 8, 2020. (Reuters Photo)
by Tarık Oğuzlu Apr 21, 2020 12:05 am

In the post-coronavirus world, globalization might slow down across the world, yet it is likely to accelerate at regional levels

It is now undoubtedly clear that the post-COVID-19 world will not be the same as before. Many things will change. Even though some prominent international relations scholars argue that we are now on the cusp of a new world order in which the forces of uninterrupted globalization process will give way to the forces of protective nationalism and nation-states will strengthen their status as the most legitimate political community. Some others think that globalization is a never-ending process and the rise of such transboundary challenges as epidemics and environmental disasters will require more globally coordinated responses. While the former group of scholars is more predisposed to the view that the emerging world order will evince more intense geopolitical competitions among great powers – most notably between the United States and China – the latter is more inclined to believe that the degree of interdependencies, as well as the density of transnational interactions across the globe, is so high that turning back to the pre-globalization era is almost impossible.

I think both predictions are correct, and we do not need to choose one at the expense of the other.

First, it is certain that globalization will face strong criticism. The coronavirus has demonstrated that unwanted incidents occurring in distant places can have a direct impact on our lives. The risks of global supply chains and instant financial transactions are so acute. The free movement of people across the globe seems to be the most important reason why the virus has fast spread to countries beyond China. Stagnation in the Chinese economy has produced negative economic outcomes in other countries, including particularly those which are unproportionally dependent on China-centric global supply chains.

It is no wonder that pulling up the drawbridges to prevent traffic in humans and goods has been the first protective measure adopted by many countries.

Second, the war on COVID-19 has also shown that nation-states are still the most legitimate entities to provide the most effective remedies to the virus plague. Boosting different economic sectors by injecting great sums of money, adopting strict lockdowns, locking people in their homes, asking them to respect the social distancing, treating them in well-equipped hospitals and tracing the physical movements of those who are infected by the virus could not have been handled by any authority but states.

Third, the years ahead will likely see the geopolitical rivalry between the U.S. and China intensify. This power competition will likely transpire within a post-liberal international order in which neither the U.S. will continue to act as the chief provider of global public goods nor China will acquiesce in the role of norm-taker. We already know that the U.S. under President Donald Trump's presidency has already begun questioning the liberal international order from within. No matter if Trump is reelected in November, the isolationist and nationalist tendencies within American society will continue. We also know that China under President Xi Jinping has already adopted a more assertive and claimant role in international politics, and China has changed its course from the "bide your time and hide your capabilities" dictum of earlier times.

The war on COVID-19 has demonstrated that while the U.S. puts the main responsibility for the outbreak and mismanagement of the virus on China's shoulders, China has proven to be quite eager to play the role of the new provider of global public goods, of which economic reconstruction and medical health stand out.

Globalization might slow down across the world, yet it will accelerate at regional levels. Decoupling between the American and Chinese economies might increase, yet both powers, particularly China, will increase their efforts to lead globalization in their regions. The process of regional globalization will speed up as leading countries in different regional locations see the creation of regional supply chains under their leadership more vital to their national interests than ever. While the coronavirus epidemic has shown that holding a lower status in global supply chains is quite dangerous for national economies, having interdependent economic relations with the countries of the same region might be a life-saver. Despite all the fuss about the EU's inability to help its members deal with the crisis effectively, after all, it behooves to the EU's frugal northern members to rescue their spendthrift southern neighbors. Similarly, China's centrality to the economic recovery of East and Southeast Asia in the post-COVID-19 era is quite evident. Despite the growing uneasiness of many countries in the region with China's growing self-confidence in setting the rules of new geopolitical order, they do not have the luxury of antagonizing China or hoping to recover their economies by intensifying their economic interdependency with the U.S. or the EU. In a time of growing opposition to economic globalization among many Americans and Europeans, China is the indispensable nation for wealth and prosperity in East and Southeast Asia

After the pandemic gets under control, Chinese and American models of global governance will be in a fierce competition and this competition will be more about good governance practices in such different realms as health, sustainable development, environment protection, climate change, poverty reduction, etc, than military power capacity and territorial control. Put differently, both powers will increase their efforts to sell their national narratives around the globe and try to recruit as many followers as possible to their cause.

And this geopolitical rivalry between the two behemoths offers the main reason why the globalization process will continue. To score goals against each other, the most important weapon in their arsenal would be the number of allies and partners each has in their inventories. Given the recent attitudes of both countries to the globalization process in recent years, China seems to be in a more advantageous position than the U.S. Even though the U.S. is far ahead of China in terms of the number of treaty allies, strategic partners and economic partners, the resentment against the U.S. has recently reached high levels among traditional American allies in Europe and East Asia. Given that winning the emerging geopolitical competition requires as much soft power as hard power, China's pro-globalization stance and intensifying economic and medical diplomatic efforts might tilt the balance in China's favor. I think China's Belt-Road Initiative will be under more spotlight in the years to come. Unless the U.S. designs a new version of the Marshall Plan, we will increasingly live under a China-centric globalization era. Time will tell.